Let’s not beat around the bush, most video game movies suck. It doesn’t stop the nerd inside of me getting excited when one is announced, but most of the time it ends in disappointment and a sudden urge to sock Uwe Boll straight in the face. We’re talking direct adaptions of video games here (Wreck It Ralph doesn’t count), and thankfully there are quite a few that aren’t terrible. Let’s have a look at the top five video game adaptions on the big screen. (Look at this smug asshole, it’s like hitler’s missing ball gained sentience and decided it wanted to make movies)

Quite possibly an unpopular choice to start off our list, but I don’t care. The Rock and Eomer could spend 80 minutes punching kittens on the big screen and I’d probably enjoy it. They’re both cool as hell and have charisma oozing out of every orifice. That being said, Doom is essentially just an alien action movie which generally fails to capture the spirit of the game. The movie does have a claustrophobic feel, and the FPS scene that pays homage to the game is awesome. It’s a decent action flick, but it’s made a hell of a lot better thanks to The Rock and Karl Urban. (everyone in this movie looks like they’ve got a case of swamp ass!)

I swear this isn’t on here just because of Angelina Jolie in hot pants and a tank top. Tomb Raider is complete nonsense. It’s ludicrous, but it doesn’t take itself too seriously and it’s a lot of fun, and since it’s based on a video game that has to count for something. The plot is completely rubbish, the dialogue is incredibly corny, but there are many positive points to this adaption of one of the most famous platformers in gaming history.  For a start the casting was excellent. Angelina Jolie is perfect for Lara Croft and she’s backed up by James Bond and Ser Jorah Mormont. Visually it’s great, and action wise it’s fantastic. It is hardly ground-breaking but it’s a solid video game movie. My main complaint is that it strayed too far from the game, as nobody locked the god damn butler in the fridge. (No I don’t want tea, you geriatric old fuck!)

Jean-Claude Van Damme is a bad actor, but if you tell me you don’t enjoy seeing JCVD kicking people in the face you’re a filthy liar! I didn’t even like Guile to be honest. I was more of a Bison fanboy so this movie was made infinitely better for me since the role of M. Bison was played by a competent actor in Raúl Juliá, in what ultimately turned out to be his last role before his death. Chun-Li was also played by Ming-Na Wen, who is now a fan favourite as Melinda May on Agents of SHIELD. In terms of the plot… let’s not talk about that, but the over the top action scenes and ridiculous noises coming from JCVD’s face make this a fun watch. (Were is Bison’s finger?)

Again, this may be an unpopular choice, and again I swear this isn’t on here just because of a hot woman in hot pants and a tank top. If you like Resident Evil, you’ll like this movie. The sequels aren’t as hot, but the original is really good. The zombie genre was a hot commodity at the time and Paul Anderson did a good job in catering to the general audience rather than just fans of the game. Milla Jovovich is now known and loved in the nerd world as Alice, our female protagonist, chief zombie ass kicker and general badass of the entire series. Jovovich beating zombies into a pulp is enough to make this a good watch but it’s also supported by many nods to the games, including a Licker and the introduction of the Nemesis program (STARS!). The action sequences are outstanding and continued that way throughout the entire series, even if the writers started running out of ideas in regards to the plot. If you’re a fan of Resident Evil and haven’t indulged in this yet, you now have six movies to work your way through. Get cracking! 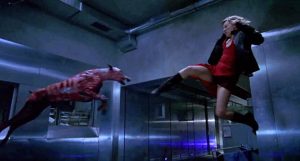 (Try jump scaring me after I’ve kicked your balls into your mouth!)

Unlike most video game movies, Mortal Kombat captures the spirit of the game pretty well, but I think what really made MK successful is that it didn’t take itself too seriously. The dialogue is over the top cheesy and the action sequences even more so, but the director knows this and its part of the charm. The CGI is absolutely horrendous to look back on but it is of course over 20 years old. With the exception of the guy playing Shang Tsung, all the actors revel in being as corny as possible, but I love it. It’s also pretty realistic in parts as it shows the only way to take down a 7 foot giant is to punch him straight in the dick! Also, Christopher Lambert is Raiden. Mortal Kombat is great, and takes the title of my favourite video game movie to date.

(MORTAL KOMBAAAT. You all did it at least once.)

Think we missed any or just disagree? Leave a comment down below.