Well the last Top 5 most heartfelt moments did quite well, though we did have some feedback from fans about the selection, and with that in mind here is Another 5 Heartfelt moments in Video Games. (This isn’t lazy, it’s a sequel)

1. The Last of Us – Joel’s Daughter dies

The last of us is possibly one of my all-time favourite games, but holy fuck is the beginning of it sad, while most games let you get comfortable before they start throwing heart-breaking moments at you; The Last of Us hits you with a sickener right at the start. The not zombie apocalypse has kicked off and Joel has to carry his daughter Sarah out of town while being chased by clickers. It’s not long before a soldier stops the two off them by pointing a gun at them. I remember holding my breath as the soldier opened fire on them and is then killed by Tommy and we think for a moment everything is going to be alright. Wrong. Sarah has been shot and is fighting for breath, while Joel holds her in his arms she dies and we watch as he tearfully begs her to stay with him. Fuck you Naughty Dog. 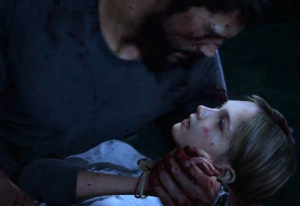 2. Shadow of the colossus – Agro falls

Shadow of the Colossus was a return to classic video game storytelling, princess is missing, hero must rescue her, only in Shadow of the Colossus the princess is dead and instead of Bowser, the hero must climb over the backs of mountain sized monsters and end their pleasant, non-violent reign. But bollocks to that dead princess, the sad moment comes late in the game when you’re trusty equestrian companion Agro, who has been instrumental in your quest, falls from a bridge, while throwing you to safety. I myself was particularly sad because I don’t do hurt animals in video games, I’ll happily mow down my fellow man with a gun (in games obviously) but never animals. Now I hear you say “but Gerard, Agro survived, she’s alive at the end”, yes this is true, but she is a horse with a broken leg, do the Maths. 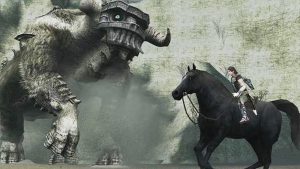 Mass Effect has many emotional moments, so many in fact there are two in this list, but of the two, the first that springs to mind is the death of Thane Krios. Thane is the Drell Assassin you meet in Mass Effect 2, he is a certified badass with a weapon and he is cool as shit, but Thane has Kepral’s Syndrome, (space asthma) and thus can’t help you in Mass Effect 3. That doesn’t stop him being a complete and total badass however, when Shepard is fighting Kai Leng, Thane steps in to protect Shepard. The sad moment is when Thane is dying in hospital and he asks his son to say a prayer for Shepard and he passes away. 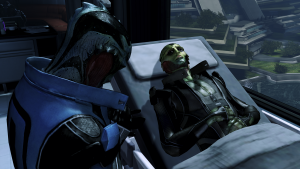 While Metal Gear Solid 4 was a fantastic game, Christ on a bike was it depressing. The eternal baddass Solid Snake (heh) has aged like 50 years and despite the ridiculously advanced magic technology, it can’t be reversed, his ex-missus has shacked up with a man who shits in barrels, his bone smuggler of a brother simply won’t stay dead and he now lives in a platonic gay marriage and has an adopted daughter. Pick your favourite saddest moment. 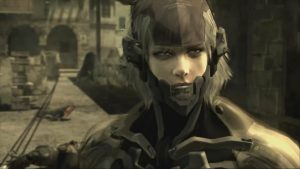 (Even this whiny little bitch got a happy ending!)

Mordin Solus is the quirky Salarian Scientist from Mass Effect 2&3, he is you’re companion in Mass Effect 2, I personally only kept him around because of his beautiful singing, but you may have found his pistol skills useful. Mordin was one of the more interesting characters, mainly due to the fact he helped construct the genophage (A mass sterilisation of an alien race), he also kills without mercy when he believes there’s no other option, (my kind of guy..uh alien). He does however decide the genophage has gone on long enough and decides to reverse it, it’s while doing this the sad moment happens. Mordin discovers that in order to distribute the cure, he must stay in the self-destructing lab and do some last minute adjustments, sacrificing himself. All while singing, this one actually brought me to tears. 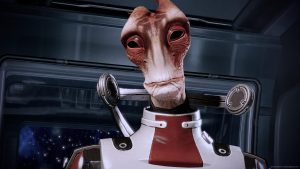