Black Panther has returned, ready to deal out panther flavoured justice to anyone stupid enough to mess with a grown man who feels no compunction about dressing in a cat suit.

Long live the King, well, not the last king he died in an explosion, but the new King T’Challa aka The Black Panther, in his first of what I hope will be many standalone movies. I may have given my opinion away a little prematurely, but rest assured I have more gushing to do.

Set immediately after the events of Civil War, T’Challa aka The Black Panther aka the richest mother fucker on the planet is all set to become the new King of Wakanda, a technologically advanced, yet socially isolated country. But it is not just his father’s throne he has inherited, he has also been left with his responsibilities and past mistakes, one of which has come back to haunt him…. well, there’s probably more issues, but I doubt that the socio-economic issues that arise from a new monarch are as interesting as a bad guy named Killmonger showing up to piss in the crème brulee.

Now, I’ve watched my share of movies and TV shows (and then some) but I honestly don’t think I have ever watched one and thought, “this is the perfect cast, I wouldn’t change anyone” but with Black Panther I did. This movies’ cast is one of the best I’ve ever had the pleasure of watching on screen, every character seemed perfectly cast for their role and no one was wasted. They all added something to the story, some contributed more than others obviously, but each person made their presence known and brought their character to life.

Chadwick Boseman as Black Panther was as awesome as ever, it was great to see him expand the character of Black Panther beyond powerful warrior, while he is still very much that, he is also a young man who has lost his father and yet despite his grief, he still has to rule a nation.  He is a man caught between doing what is safe or doing what is right, and Boseman brought that conflict to life on screen.

It is always great to see strong kick ass women in movies and Marvel seem to be continuing that Trend with Okoye (Danai Gurira), leader of the royal guard and general of the Wakandan army. This woman is a force of nature, she is a reckoning in a flowing dress, a person with whom you would not wish to fuck and whenever she was on screen she stole the spotlight. 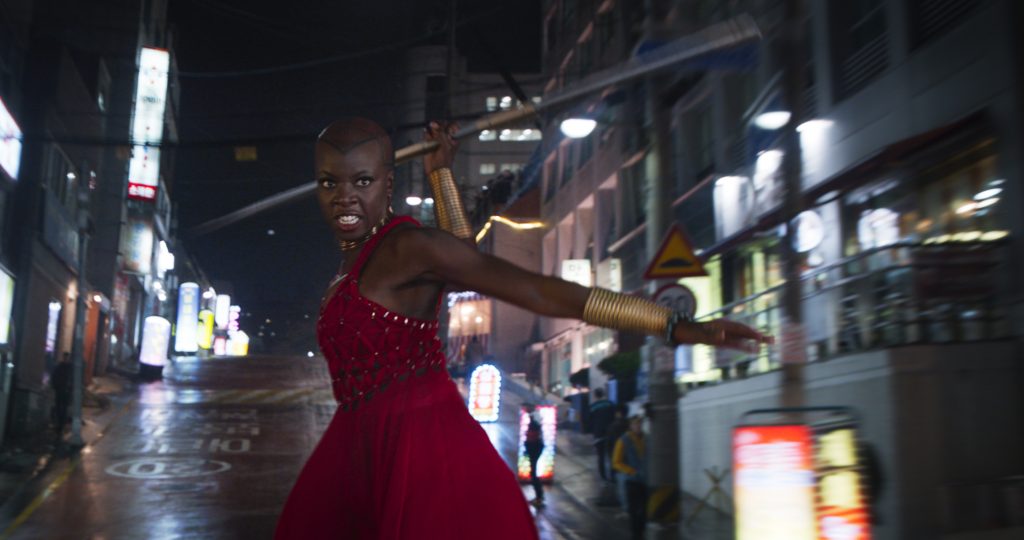 (This woman is doing battle in sandals and a dress, I cant manage a slight jog in slippers!)

But it’s not just elite female warriors Wakanda has on offer, it’s best and brightest scientist is a young woman, Shuri (Letitia Wright) the princess of Wakanda. This character in particular was a favourite of mine, not just because she injected humour into every scene she was in, but also because she was essentially the Q to T’Challa’s Bond, without her Black Panther wouldn’t exist in his current form, she creates his armour, builds his weapons and gadgets, and is a constant source of information and support.

Last but by no means least we come to Michael B. Jordan as the charismatic villain Killmonger, possibly my favourite Marvel Movie villain to date. I have always said that the mark of a truly great villain is a humanising element, something that the audience can empathise with, something that makes you say, “you do make some valid points and I get where you’re coming from but is there any chance you could murder fewer people in the process?”. Killmonger has this element, while he is without a doubt a murderous dick, who deserves all the hatred we can muster for him, you can’t help but feel for his character, he is the product of circumstance and neglect. Michael B. Jordan was a joy to watch and I hope it’s not the last we’ve seen of him. 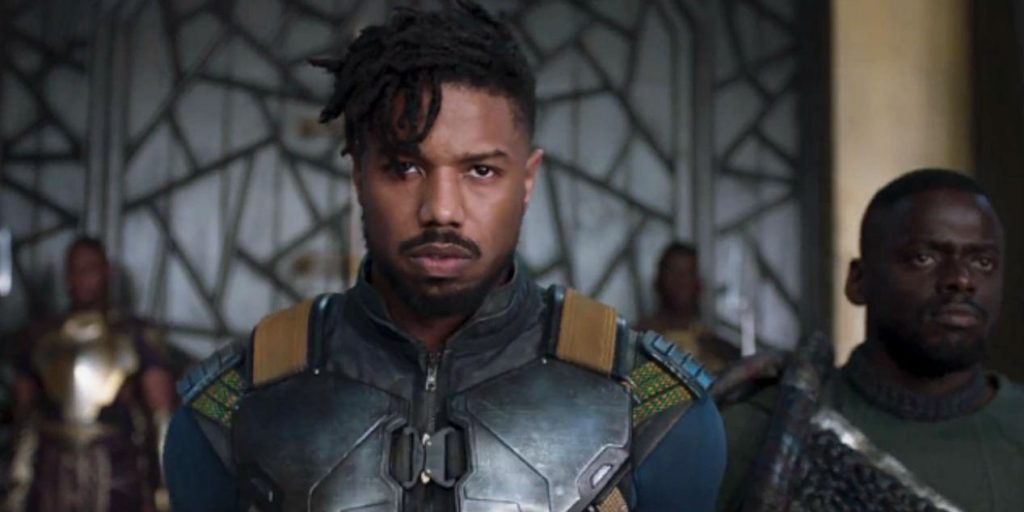 It’s not just a great cast that Black Panther has going for its self either, it also looks stunning, I found the aesthetics to be something truly unique, based loosely around the idea of Afrofuturism it takes influences from the past and present and weaves them together with the superhero sci fi genre to create something entirely exceptional. While most of the cast dress and arm themselves with traditional African clothes and weapons, even these mundane items are still technologically advanced, such as the traditional African dashiki with built in shield, or the vibranium spear capable of stopping a tank. It all came together to create this wonderous world that drew me in while filling me with intrigue.

But the thing that stood out most for me about this movie was it’s wonderful flow, it was so mercurial, never lingering in one place too long, and yet it never felt like it was neglecting anything, everything moving at a canter. The flow is woven into every aspect of the movie, a constant rhythm that has to be experienced first-hand, it is difficult to put into words as it affects all of the senses, you see the beauty of Africa, hear the beat of the music,and feel your heartbeat quicken as the action crescendos into a wonderous ballet of battle.

Black Panther is one of Marvel’s most interesting standalone movies to date, with its well told story, spectacular performances from an immensely talented cast, its thought provoking themes about socioeconomical responsibility, and awesome, action packed rhino-mounted battles Black Panther has it all. Marvel could’ve just as easily churned out another superhero movie that was fun but fleeting, but writer/director Ryan Coogler went that step further to create one of the best superhero movies yet.