As I have mentioned before, Superman is my all-time favourite superhero, he is the quintessential superhero, strong, inspiring and unwavering in his moral code, so it may surprise you to learn that my favourite supervillain is not Lex Luthor. Don’t get me wrong Lex Luthor is an awesome villain but he doesn’t really epitomise the word supervillain for me, no, for my money if you want an example of a truly great supervillain, you need look no further than the clown prince of crime, The Joker.

The Joker is one of the most interesting, and terrifying villains I have ever had the pleasure of reading about. He is completely devoid of empathy and compassion, he cannot be reasoned with and he cannot be intimidated, he is closer to a force of nature than a man. But he is more than just a mere homicidal lunatic, he is possessed of an intelligence that goes beyond genius, something dark and chaotic but at the same time controlled and ordered, which makes him far deadlier than any other villain. And to prove my point I am going to share with you, the five worst things The Joker has ever done.

Convinced a Policeman’s Wife to Hang Herself

Okay we’ll start small, with one death, in “Do You Understand These Rights?” we are shown the first time that Batman ever captures The Joker and drops him off with the police, because this is before the creation of Arkham Asylum. At this stage all anyone knew about the Joker was that he liked to dress as a clown and kill people, pretty standard for Gotham, what they and more importantly the police man processing Joker’s arrested don’t know is that he is something new, and terrible. He uses his one phone call to speak with the detective’s wife and convinces her to kill herself, it would be impressive if it wasn’t so fucked up! 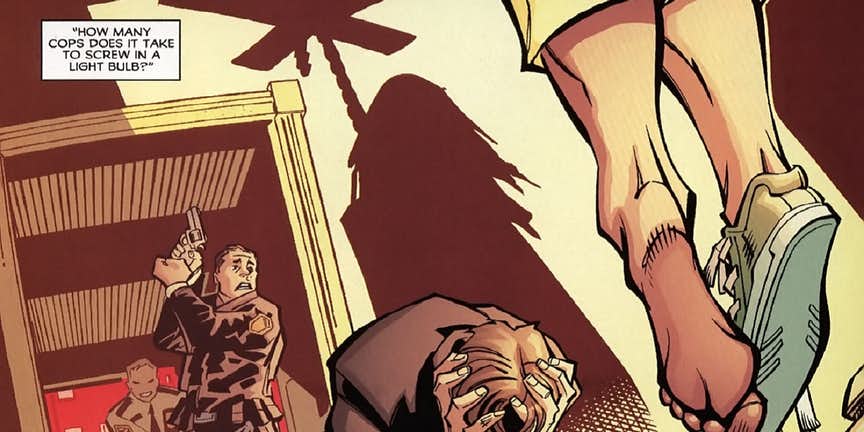 Blew Up a School Full of Kids for a Punchline

If there’s one thing The Joker loves more than a good joke, it’s his brand. In “Batman: Cacophony” when a criminal known as Maxie Zeus mixes Joker’s “Joker venom” with ecstasy to create a new drug called “Chuckles”, The Joker naturally takes exception to it and blows up a school full of kids (and potential drug customers) as the punchline. The act itself, while terrible, isn’t the worst part, it’s the fact that he does it so nonchalantly, like it’s all a big joke to him. 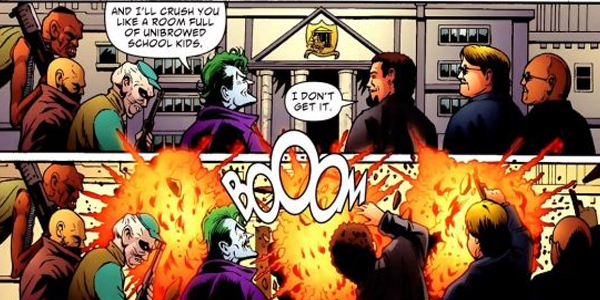 After a series of events that left Gotham isolated from the rest of the USA and ruled by supervillains, The Joker decided to kidnap dozens of babies and hide them in the basement of Gotham police station. When Sarah Essen (Jim Gordon’s wife), finds the babies and The Joker, he tosses one of the babies at her as casually as you or I would toss a TV remote, and then proceeds to shoot her in the head. But that’s not the most fucked up thing, he walks off leaving all the babies to crawl over her lifeless corpse and one to sit in a pool of her blood. 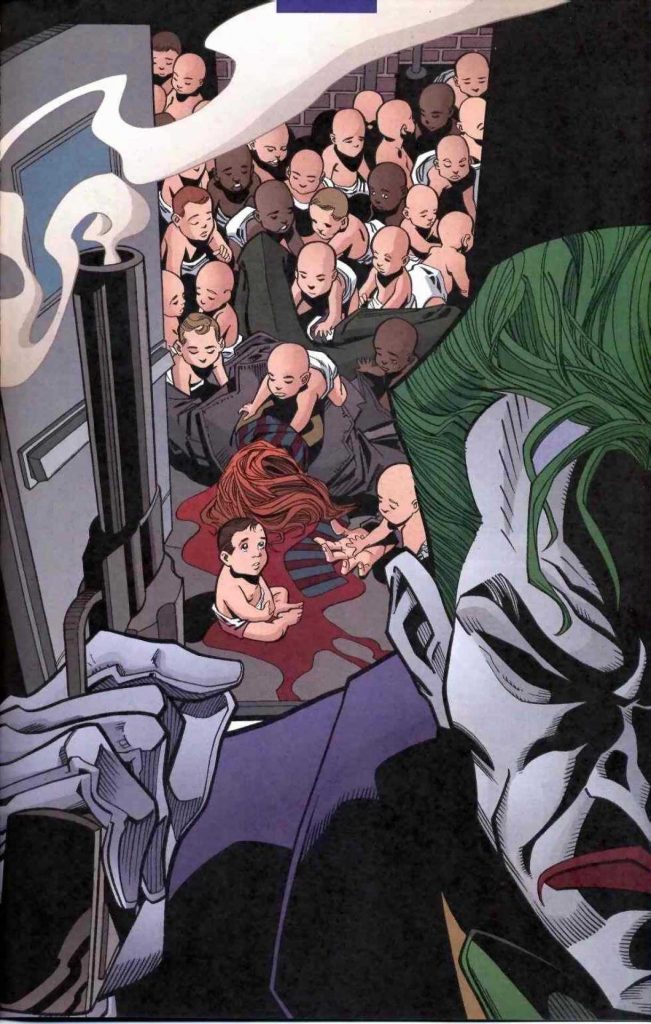 In the Graphic novel “Joker”, The Jester of Genocide is being released from Arkham Asylum because of course he fucking is! It may as well have a revolving door for all the good it does! Joker has decided that he needs to settle a few old scores, one of which includes getting even with a former business partner named Monty, who has been treating the women at his strip club like “pieces of meat”, (say what you will about the joker, he’s all about equality). The Joker then proceeds to skin Monty Alive and watch as he stumbles out onto stage, and if that wasn’t bad enough he smacks him on the arse with a dollar. 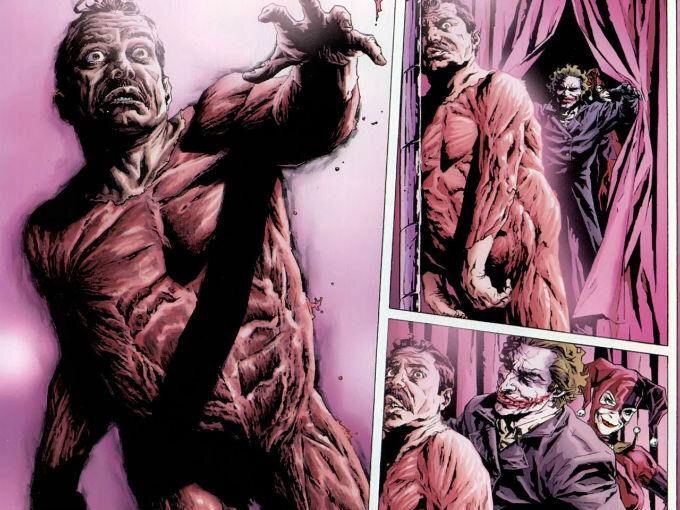 It’s up for debate as to what the most terrible thing The Joker has ever done is, but for me, it’s what he did to Barbra Gordon, and her father commissioner Jim Gordon in the events of “The Killing Joke”. The Joker decides that he must prove to Batman that anyone could become like him if they have just “one bad day”, to prove this, he shoots Barbra Gordon in the stomach, paralysing her. He then continues his onslaught, by stripping her naked, possibly molesting her, and taking pictures of the whole gruesome ordeal, with the intent of showing the images to a bound, gagged and naked Commissioner Gordon in an attempt to drive him mad by giving him “one bad day”. 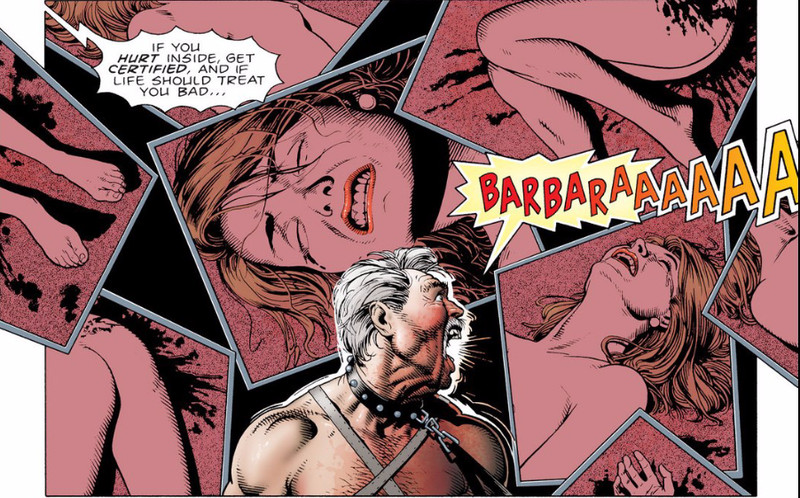 Whether you love or hate him I think we can all agree that there is no other super-villain like The Joker in the world, and that is probably for the best given the content of this list.

Well that’s our list of The Five Worst Things The Joker Has Ever Done, do you think we missed any or just disagree, let us know in the comments below and don’t forget to subscribe to our YouTube channel to watch our Let’s Play series.