Player Unknown battleground (or PUBG) is still, at time of writing, in development for Xbox One gamers, so I will explain to the best of my ability what I have encountered so far, and hopefully that will help you in your pursuit of a tasty chicken dinner.

What am I doing here and what do I do?

I booted up the game and was greeted with a standard menu home screen, I hit start and up comes 3 different options Solo, duo and squad (3 or 4 player). I launch into Solo like john Rambo ready to unleash my full fury on the other 99 poor bastards in the arena, though I have no idea what I was getting myself into. The loading screen takes place on a small island with the main land off in the distance, there are weapons, but much to my homicidal dismay, no damage can be sustained as its just giving people a chance to load in. It also doubles as a quick practice area, where players can learn the controls and perhaps discuss tactics if you are playing with a team. 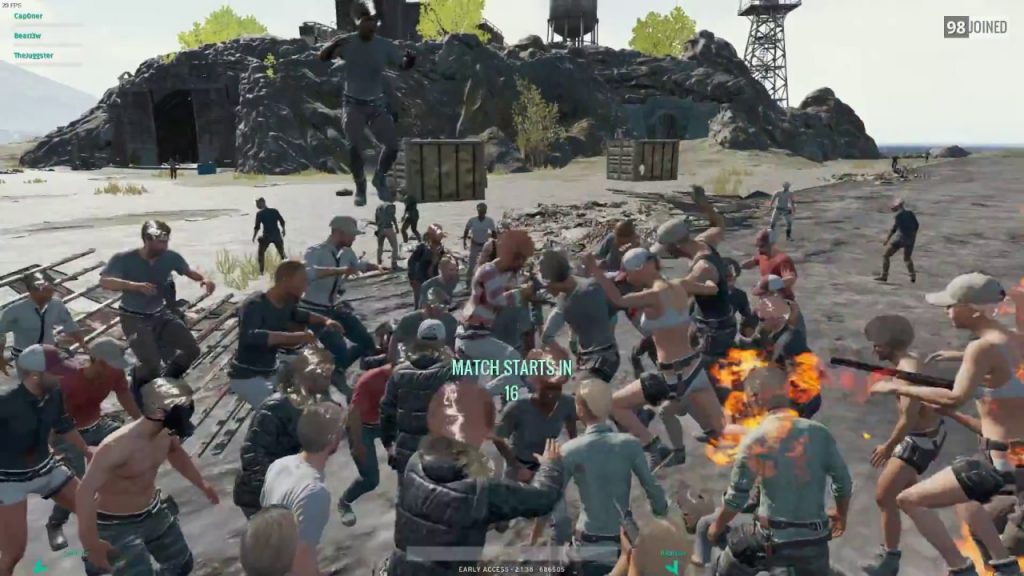 Next, I found myself on an aircraft, surrounded by a full company of assholes who wanted me dead. Shortly after, we were given access to the full map to plot where we were going to jump and land. The Game is set, and all the players make it to the zone, we are given a few minutes to arm ourselves, gather supplies like ammo, scopes and med kits, until each zone closes, and we are left with no other choice but to fight till the death.

The tools of the trade…

Okay so I had 99 people to get through in an unknown world, my first thought was to name my two fists, lefty was to be called JJ and righty, Arnie. The reason I had to do this was on my first jump I had landed in an area with no weapons and I thought “I may need to punch my way to number one!”, but as luck would have it I was able to procure a frying pan (it was better than nothing). Suddenly, gunshots rang out and I looked to my west to see that I was not alone, a group of lucky bastards had landed next to shotguns, machine guns, sniper rifles, grenades, and more than likely had their sights set on my unarmed ass. 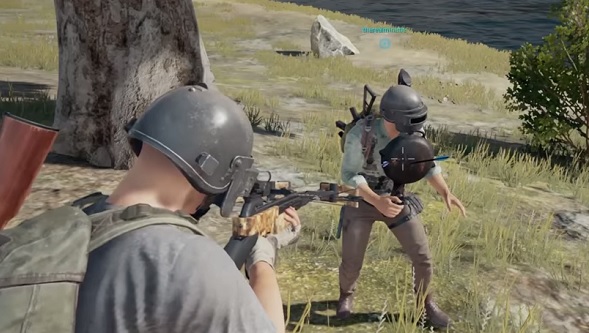 (Captain America has his shield, I have Kevin!)

Fearing that death would soon be upon me, I decided it was best for Kevin and me (yeah, I named my frying pan Kevin) to depart. As I made my way towards the next zone out the corner of my eye I spotted the silhouette of a motor bike, on the freedom bike Kevin and I hopped, throttle open and the wind in our hair we take off, bullets whizzing past us like a fly with an arse full of dynamite. Kevin takes a direct hit, which made me laugh as it seems unrealistic but a nice touch for such a simple item.  We can smell the next zone, its within our reach, my heart is racing, Kevin is as cool and relaxed as always and we come screeching in the next zone and find a house to recover in. But, to my dismay, I notice that we aren’t alone as there is a car and a jeep parked outside, the time for subtlety is over.

I equip myself with a shotgun, but before I can pop a single cap, in bursts two other players and Kevin and I are cut down by the wrath of machine guns. I finish 46th out of 100, not bad for my first attempt but still well short of first place and getting the coveted “winner winner chicken dinner” award.

The Unknown so far…

There are a few wrinkles to iron out, like the frame rate, vehicle and character controls (all of which are still a work in progress), but I can overlook all of that because of the sheer amount of fun there is to be had. The serious gamer in me enjoyed the solo, and the fun-loving side thoroughly enjoyed the multiplayer.  It seems this game caters for a lot of players which can only be good.