The year is 2714 and Earth has been conquered by a brutal alien race. Our only hope is a team of unlikely heroes, led by the planet's most formidable warrior, Brigadier General Neriah Willis. The utopian world of Eden offers refuge, but our heroes quickly discover something far more sinister is at play.

Imagine strolling through a beautiful garden, adorned with colourful flowers, enchanting smells and the softest grass as far as the eye can see.  Well this comic is kind of like that, except that it’s filled with alien life, spaceships, intergalactic warriors and the suspension of any belief that you are safe. So, let’s take a walk.

The first aspect that came to my attention even before I had made it to the opening panel was the artwork and colour on the cover. It immediately grabs the reader’s eye, the combinations of deep blues and purples adorned with shades of indigo blend beautifully together to create something other worldly. Then we have the character design of the three main protagonists, cornered and poised for battle, all of whom are uniquely designed. Neriah’s the badass female lead, wielding a sci-fi weapon that glows a mystical light blue/teal colour, Kla’Tuu a Sylth alien (in every sense of the word) and Christian the classic rugged scoundrel. Everything about the cover intrigued me. 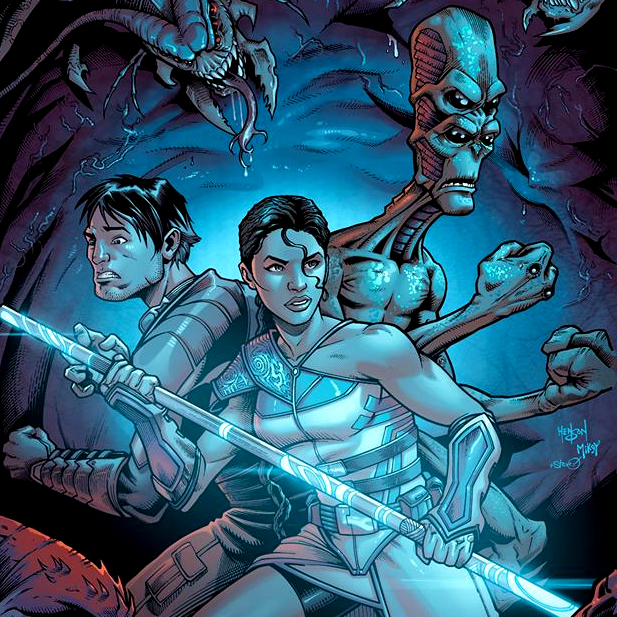 This colour scheme continues throughout the comic and is used so economically, every panel knows what its job is with regards to setting up and carrying the narrative. This is achieved largely through the exceptional use of colour, setting aside the dialogue for a moment this would be a fantastic story based on art alone, but there is a story and a great story at that. It begins with our team of misfits perched high on a ledge overlooking a futuristic alien city; once again colour is employed to give us a sense of the world. The familiar deep blue’s from the cover capture a magnificent apocalyptic aesthetic, something reminiscent of Blade Runner. Without a single word of dialogue, the artist has created a sense of foreboding and danger. 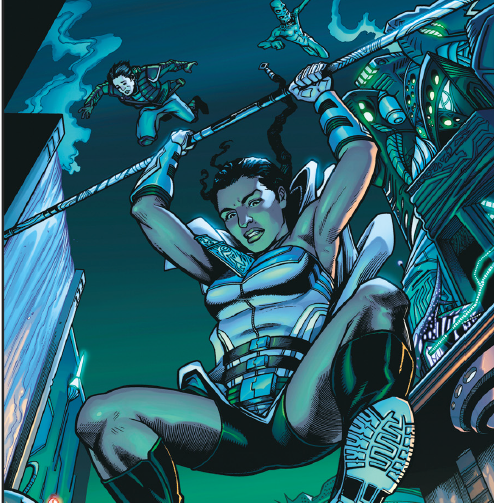 But our heroes aren’t just on this rooftop for the view, they have gathered together as they intend to recover Neriah’s son Avion, who was kidnapped by an as yet unnamed assailant. They begin to discuss how they will get past a barrier, immediately my mind conjured up images of force-fields or laser-beams, but I couldn’t have been more wrong. After plummeting hundreds of feet and landing safely our heroes came face-to-face with the barrier, but it wasn’t the sci-fi force field I had imagined, it was a sentient alien wall. To say my expectations were subverted would be an understatement, a sense of intrigue washed over me; I was desperate to know what was behind this gate. The narrow focus that was initially on our protagonists was now ever widening to reveal a wondrous universe filled with mysterious forces that not even our characters can comprehend.

As we progress through the story each character plays their part very well and none feel like they are being left to the side or are only there to buff out the rest of the cast. The writers have clearly found that balance between character time/dialogue and importance to the narrative and this lets the reader invest in each equally without losing the context of the overall plot. This is evident in later panels as there are more fights and battles, the promotion of teamwork and the ever-deepening feeling that all three characters are important is as refreshing as it is attractive. 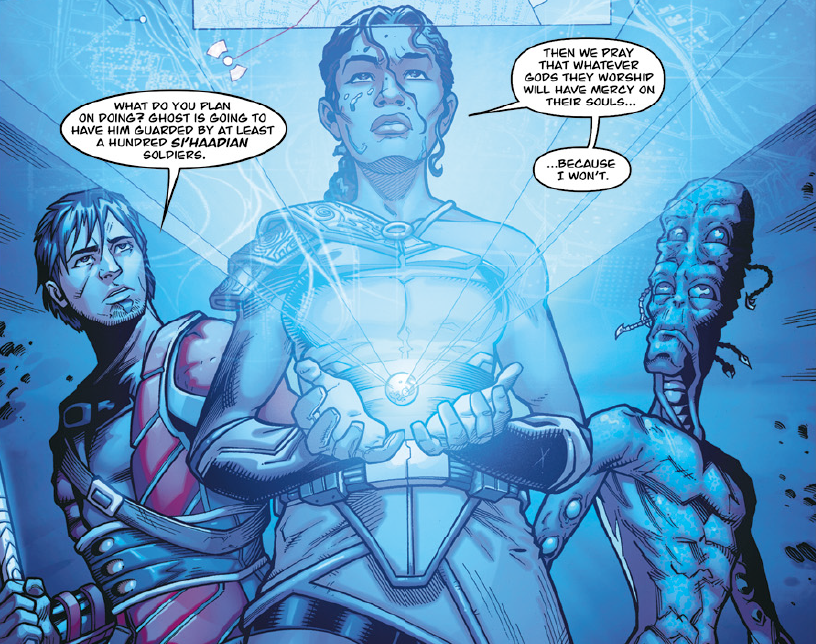 While yes, the driving sense of the story to most will be the mother rescuing her son; it does feel like she would not be able to accomplish this without her companions by her side.  This is perhaps one of my favourite aspects of this comic as it shows the whole is far greater than the sum of its parts.

A sci-fi tale with more depth than that of the deep blue sea and that had me transported away to another world filled with adventure, peril, discovery, love and the  overwhelming presence that even as readers we are part of the story.