In a world were justice is a commodity, a pantomime to appease the masses and more of a show than a daytime opera, who will come to our rescue and save us not from the villains that roam the streets, or gaze from their cages, but perhaps from our biggest threat…Ourselves.

The opening of Gung Ho begins with the main character aboard a plane in, shall we say, difficult circumstances, the plane is on fire and he is doing battle with a robotic madman who has just kidnapped the worlds most lovely actress.  Cliché though it may be, what with the whole damsel in distress theme, but it is an exciting start, and already the reader is grabbed and thrust straight into the story, should we read on and find out what happens? Oh, I think we should, but before we do I should point out that our protagonist is an ass kicking Ape called Oliver! 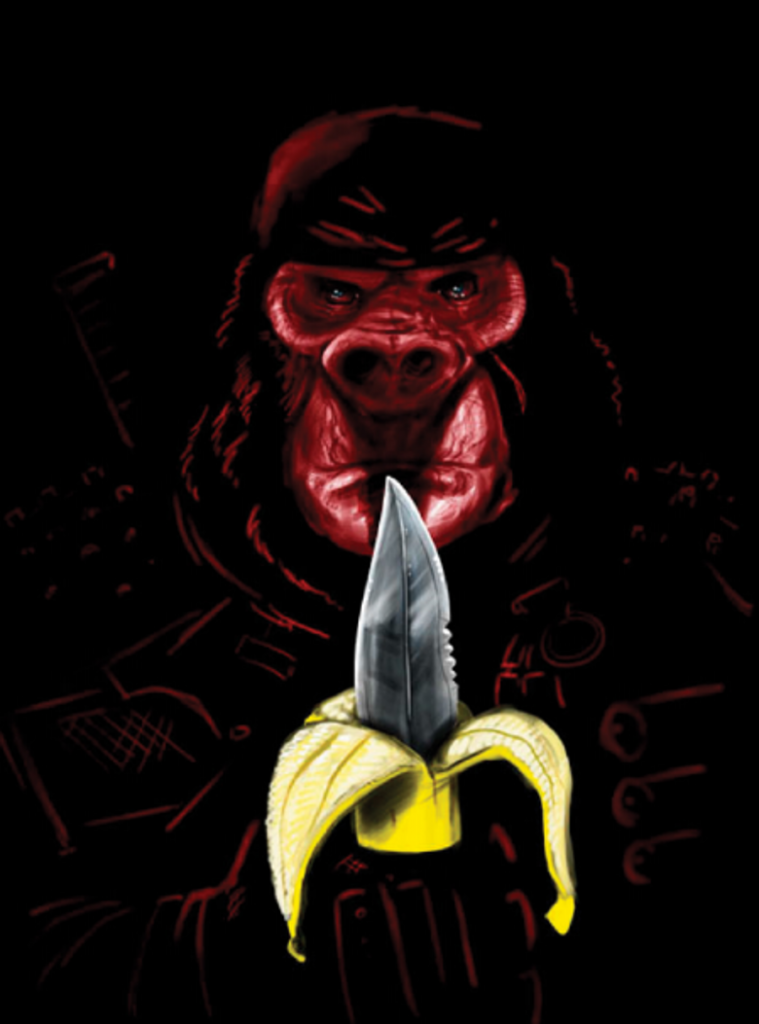 Several panels later and Oliver is mid-way through saving starlet, Lana Wray, though from the context she doesn’t seem best pleased about being rescued by an ape, but hey, at least she is being rescued. After some classic mid rescue banter between Oliver and Lana (which adds a subtle touch of comedy to the situation) it is on to meet the rest of the humans and celebrate one hell of a rescue.

Post rescue we’re shown a stunning award show-like scene, with many humans all dressed up in their monkey suits (including Oliver) and to my surprise all the support/floor staff at this shindig are animals, I was taken aback by this image of a tiger serving drinks or a majestic antelope asking me if I would like a refill, as perfectly drawn as this panel was, it manages to catch the reader off guard, which is always good.

As the story progresses and we are introduced to a plethora of new characters both human and animal, it becomes more and more clear that the line which separates the humans and the animals is becoming ever more blurred, and I found myself wondering if I side with the animals or the humans.  This internal conflict lends itself beautifully to the art of engaging the reader in the story, I shan’t give away too much of the plot or the characters you will meet, but sufficed to say you will see just how little separates the humans and the animals and I don’t mean the panels.

Beyond the characters I could sense a recurring theme, much like the film The Wall by Pink Floyd, one society, complete control, no mind different and no thought its own, to cage the freedom of the human/animal spirit is to wither ones very existence. Waxing poetic perhaps, but the illustrations in this comic do just as much to grab the reader as the plot and dialogue, they are the balance between what is in front of us and what our imagination wants to see, this is a very hard line to walk but Gung Ho has no trouble doing it at all. Does absolute power corrupt absolutely? Getting further into the story I assure you, you will most definitely find out, along with the Glitz and the Glamour, not to mention the action-packed panels strewn through the comic, there are also several sombre panels with no dialogue but that speaks volumes about how that character or indeed the people feel. They could come in the form of a grey prison adorned with the dark red hatred of those disgusting caged animal villains, or perhaps the cold, unrelenting grey coloured steel of a science lab, used only to further those horrible oppressive humans’ own descent into their own personal feeling of self-worth, at times even saying a single word.

Action, Suspense, Drama, conflict, war and peace, and more are what you will find in this comic, as a reader you will be free to imagine your own world, but at the same time unable to escape the beautifully drawn one in front of you.  George Orwell’s Animal Farm was a striking thought when I had finished reading this Comic (even though it is much more than that) but this time as a reader I asked, “who are the animals and where is the farm?”