Last night the Movie House cinema invited me to see a preview screening of "The Accountant", a movie about an ass kicking, number crunching, maths genius .

So I just got back from the press screening for The Accountant, and I have to say, that I was blown away by this film. I hadn’t heard much about it, hell; I didn’t even watch the trailer, so I didn’t know what to expect from it, I will however say I know what I didn’t expect. I did not expect Maths Batman.

So the plot surrounds Christian Wolff (played by Ben Affleck), who is a forensic accountant and maths savant, who was diagnosed with autism as a young boy.  Wolff uses his unique skills to track financial discrepancies for various criminals inside their own organisations, but in doing so he has put himself in the cross-hairs of the director of financial crimes Raymond King (J.K Simmons) and a young analyst Marybeth Medina (Cynthia Addai-Robinson).

In order to keep a low profile, Wolff decides to take on a legal assignment auditing a company called Living Robotics, whose in-house accountant, Dana Cummings (Anna Kendrick), had found suspicious discrepancies. When Wolff confirms that 61 million dollars have been embezzled from the company, tits began to escalate vertically when an assassin (Jon Bernthal) shows up. I won’t go into any more details because it really is a story best experienced first-hand.

Right, before we go any further, when did Ben Affleck become an amazing actor? Seriously did I miss that memo? I still remember him as Daredevil (all though I’m trying to forget) and from the Kevin Smith movies. He was by no means bad in the Kevin Smith movies, but in his most recent films he has really been amazing.

Ben Affleck’s portrayal of a person with autism in this film was done remarkably well, and in the best of taste, I hasten to add. It was the subtleties of his performance that sold it for me, from the way his character would blow on his fingers before beginning a task or the way he prepared his meals to his own, unique specification. On the flip side of the coin, Affleck projects the characters pain and discomfort so authentically, when things didn’t go his way. One example of this is when he is unable to finish a project, his routine is ruined and the exercises he uses to calm himself no longer work. It’s clear that the writers did their homework on the subject.

Anna Kendrick was great as Anna Kendrick. She pretty much plays the same role in the majority of her movies, she wasn’t bad by any stretch of the imagination, and she adds a light heartedness to the story which kept the movie from taking itself too seriously. 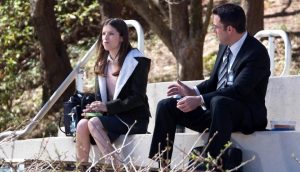 (I mean look how adorable she is)

Jon Bernthal as the hired assassin was a joy to watch; you get to see his range as an actor with this role. He was a tough badass throughout his performance and with that, came some fantastic one-liners; in fact the entire film had a sprinkling of humour throughout. And without wishing to spoil, when his character is forced into more serious situations, you do get to see that there is more to him than a mere hired gun.

The characters are all fun and imaginative, they’re well written and I rarely found myself cold towards anyone who was on screen.

There is a lot to like about The Accountant, like the awesomely choreographed fight scenes that see two people sparing in Pencak Silat (an Indonesian fighting style) or something simpler, like Anna Kendrick defending herself with a porcelain toilet lid. I also liked while it was a serious film, it could still make me laugh, and it had some genuinely funny dark humour in it. The story, all in all was great, it kept me invested in it through most of the movie, a great action thriller that knew when to use exposition and when to shut up and shoot things in the face (that happens quite often).

The issues where few and far between, there was a lot of jumping around in time in the story, which kind of felt a little all over the place, and some plot points felt a bit unnecessary, but these are overshadowed by the fact Ben Affleck fights off a man with a hunting knife, with his belt.

While The Accountant may not take home an Oscar, it is one of the most fun experiences I had watching an action movie, in a long time. An all-round great film, good story, action packed fight scenes and some genuinely touching moments, I highly recommend it.