“M Night Shyamalan provides us with a very M. Night Shyamalan take on the horrifying yet intriguing Dissociative Identity Disorder (DID). Is this a return to form for the former supernatural thriller specialist?

The Sixth Sense was an immense film. When I first saw it I was just a youngster, and it proceeded to scare the piss out of me, but when I revisited it as a much older and wiser adult, I realised it was an excellent psychological thriller. Due to his initial breakout success with The Sixth Sense, I continue to give M Night Shyamalan the benefit of the doubt, but let’s be honest here, he hasn’t made a good film in roughly 15 years. 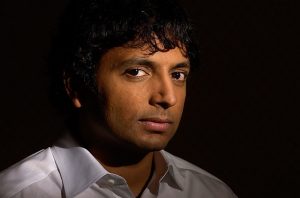 (Here’s another twist, that wasn’t a fart, I shit my pants!)

When I saw the trailers for Split, I started to get a little bit giddy inside. It looked… great. It looked like it could be the film to put an end to Shyamalan’s downward trajectory. I was surprised yet delighted that McAvoy had signed on, given how savage the critics had been with most of Shyamalan’s previous outings. With no bias, I went into this film with a clear head and I really wanted to like it.

Split begins with the abduction of three teenagers who have just finished attending a birthday party. Casey (the excellent Ana-Taylor Joy) is a bit of a recluse and reluctantly accepts a lift home, becoming the cliché victim who should never have been there in the first place. As the girls come to, they find themselves in the presence of their kidnapper, Dennis (James McAvoy). Dennis is quite a methodical man, who suffers from a severe case of OCD. After the girls suffer an undoubtedly sinister assault from Dennis, they are left to come to grips with the situation they are in. They receive a glimmer of hope when they hear the voice of Patricia through the door of their makeshift prison and after calling out for help they are horrified to learn that Dennis and Patricia are the same person, occupying the same body, but utilising completely separate personalities.

At this point I found myself coming to terms with my first major gripe of Split. After a failed escape attempt, we find ourselves witnessing unnecessary sexualisation of what I assume are meant to be underage school girls. One of the personalities has OCD, sure, but there are other ways to display this disorder. It isn’t required to have a young girl walking around in her underwear because she got a speck of dust on her trousers. I felt like this was a cheap attempt to have attractive young actors on display in order to widen the audience for this film. 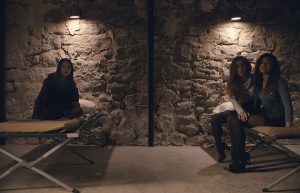 As the film progresses, we’re provided with another character introduction in Barry. More importantly Barry is attending meetings with DID specialist Karen Fletcher (Betty Buckley), who is a strong believer that her patients that suffer with DID are capable of extraordinary feats, such as enhanced strength or the ability to cure blindness. As the conversation between the two continues, we find out that Barry is another personality, who identifies as a flamboyant fashionista, and is one of the more friendly personalities. Through Dr. Fletcher we understand that all of the personalities have assumed control of a man by the name of Kevin, who developed this disorder due to suffering at the hands of his mother when he was just a child. We come to understand that there are 23 personalities in total.

While we do not see all 23 personalities, James McAvoy is outstanding in his portrayal of the ones we do. His ability to switch from one character to another while remaining in frame is excellent. You become familiar with the slightest change of tone and facial expression as he identifies as “someone else” and you genuinely feel like these are different people. It’s a testament to the ability of McAvoy, and with a lesser casting this could have been a disaster. 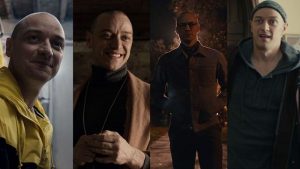 As we entered the final sequence, I found myself asking a question. Why? Why go this route with the ending. It’s preposterous. The crux of the story is the development of a 24th personality, which goes by the persona of The Beast. It’s clear that The Beast is an animalistic and highly dangerous manifestation of the grief and anger that lives within Kevin and we are watching in anticipation for the emergence of this personality. The director has done a fantastic job of building the suspense for this exact moment. The whole selling point of this movie is to see “The Beast.” The execution however is just far too over the top for me. I am aware it falls within Shyamalan’s style, but by taking the route he did with The Beast, I felt he become a bit of a parody of himself and couldn’t conclude a film without a ridiculous “twist” or revelation.

I feel like the film was on course to be a solid thriller with a unique take on DID and a positive departure from the supernatural style that has plagued so many of Shyamalan’s films, but it ventured too far into the ridiculous for me. I also audibly groaned at the dialogue at the end. It was ridiculously pretentious and if it was Shyamalan’s attempt at sending some sort of underlying message it fell completely flat with me. It was a strange sequence that seemed to glorify self-harm and give the impression that if you have been abused or have self-abused in the past you are deemed “pure” and deserve your place in the world. It was bizarre. Many filmgoers will no doubt interpret this in their own way, but it just didn’t sit well with me as an acceptable and satisfying conclusion.

When I left the cinema I wasn’t too sure how I felt about the film. They say when a film makes you think, or sparks debate it’s a good thing, but as time went on I found myself getting increasingly more annoyed at how the film ended. The pacing was excellent and the performances were great, but it completely falls off the rails as it nears its conclusion. With a better ending this could have been a truly excellent thriller, but it was massively let down by the ending, and it’s something I just can’t look past.