The Town of Light is a psychological horror adventure game, and Gerard being the massive coward that he is has left it for me to review!

Opening in the depths of Italian wine country, Tuscany.  The Town of Light is tranquil from the very start, but I can assure you it wasn’t the beautiful vineyards nor the scenic view I was here for.

The graphics at the beginning of the game struck me as clear and clean, although with a few rough edges, like when I ventured into a deserted building there were certain items laying around that seemed poorly rendered. When I went back outside to continue up the path, I could see some of the trees appearing out of nowhere and pieces of grass disappearing and reappearing. Now given that this game is set in a generally small area and relies so much on the surroundings, this was at least a bit disheartening. A change in the frame rate may help but onward I ventured. (This looks like a nice spot for a picnic)

Inside the hospital (I use that term very loosely) you are greeted by a T shaped hall with different corridors and rooms to explore, so I did! I found that the details were not minimal or overloaded with attempts to “scare me”. The abandoned wheelchairs, the piles of scattered papers all add depth to the narrative. Into the kitchen, where it looked like sorrow and fear where the dishes of the day with no sign of hope. The showers did little to cleanse me of the hopelessness of my surroundings and even though it was daytime, the lighting of the rooms and halls gave me the impression that it was anything but healing that went on in this place. Again, some polishing is needed and I don’t mean the knives and forks. The Cut-Scenes in The Town of Light are among the most immersive, story-driven and attention grabbing I have come across in a long time. They present a sketch drawn madness which suits the narrative of this story perfectly.  You also have a diary to look through and add pages to as the game goes on, the diary presents the deranged scrawling’s of someone who is slipping further into their own mind.  This is a fantastic use of immersive gameplay, where the player can view the pages and cut-scenes and feel they are in the game themselves. Now, some of the cut-scenes are done with the in-game graphics and while they are striking and certainly attention grabbing, they do take some of the tension away from the overall experience, one moment I am descending into the mind of my character, then the immersion is broken and I am whisked back to reality, were I am fully aware I’m playing a game.

The Sound in this game is a testament to how we can be taken away to places not even on the map. Yes, I am walking through a creepy hospital (scary enough) but every footstep I hear echo, every bird I hear sing, every word narrated and piano note softly cast, propels me further into a world of fear, tension and suspension of disbelief. Alas, though I did notice the same sound effects are used in different areas, such as the echo of the hallway footsteps in the garden which again chips away at the tension this story tries to create. 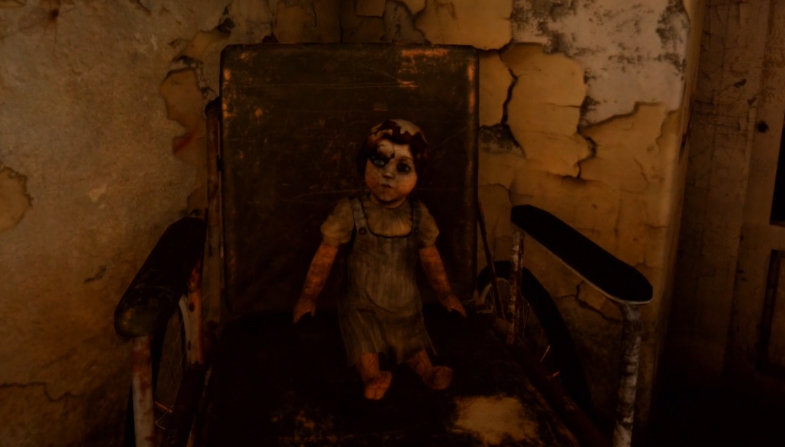 (Did you…did you just chirp?)

The narration through this game has a nice balance and does help the story but again, some parts felt a little shallow against the overall tone of the cut-scene I was watching.

The Town of Light has very little in the way of controls, the player will find themselves using the A button quite a lot as it opens doors, pulls switches and covers a range of other actions. When looking at an object, say a parcel or map you will have the option to zoom in/out and rotate the item, only then will the back buttons come into play. To return to the previous menu or screen is the B button, and a simple press of the Y button will bring up your menu.

While the controls are simplistic, they feel like they are enough to get the player through the story and it was an enjoyable experience to only have a few buttons to work with, it gave the game a minimalist, and helpless feel, which suits horror games perfectly. It also allowed me to focus more on the story without making sure I had pushed the right button at the right time. (Press X to smash doll to pieces and run screaming from the room!)

The Town of Light did not surprise me in the traditional sense of Gaming; I didn’t find my self-looking for key cards or for items to aide my quest. I did not find enemies or bosses in a physical sense, but in my own mind’s surroundings. Nor did I find the weapons with which to vanquish them.  I did not find myself playing through a game but rather a story.

A story filled with sights, with sounds, with the screams and dying hopes of all these “patients” and the player right in the middle of it all. An immersive audio experience but the graphics at times do strip back that story feel. If you are looking for a story to grip you and take you along an atmospheric journey through all the above madness, then you should visit The Town of Light.