After two, uneven but entertaining seasons it’s hard not to appreciate The Strain; it’s a big idea show that does amazing things with its limited budget. Sure the acting can be terrible but it’s never boring. After season twos awesome finale, and the Leslie Knope vs Vampire armies’ side plot, I went in excited for more action, but clutching my Silver in case something sucks.

The  Strain started as a filler show while I waited on more episodes of Walking Dead and Ash vs Evil Dead, but it bloomed to be more exciting than both of those shows. For the unaware, this is a zombie show but with a Blade 2 twist. We have The Vampire Master with his Nazi co-horts in one corner, and a Holocaust survivor and his band of New Yorkers looking to kick ass and cure the virus in the other.

This isn’t the only commendable area in the show, with just ten episodes this season everything has been much tighter and very little screen time wasted. Compared to previous seasons this very much felt like a finale series, with each episode feeling like this is the end, keeping the tension high and the pacing tight.

The opening montage to episode one shows that the war is now global. This is a surprising jump in the threat that the master and his army pose. Going forward it changes the dynamic of the show to be a much more desperate fight. It also explains why more of the military are unable to help the main characters.However this also brings in some cool ideas like Vampire Navy seals that are a welcome threat to vary from the usual runner or Nazi super soldier Vampires. 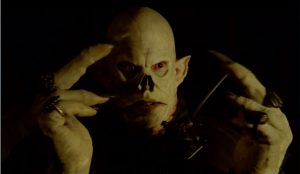 There were a few predictable moments that could have been left out, such as the book bargain story (which was flat out stupid) or the Hipster hacker group, who were ball achingly annoying and could have been used better as a gag than as filler for an episode. The time line being explained in the opening of the season stood out as fairly wank, 23 days does not make a lot of sense for the show to have taken place in, up until now it felt like the show had been developing over months or indeed a year.

Vasiliy Fet, played by Kevin Durand is a man who seems to just turn up in all my favorite shows and movie franchises, continues to be awesome throughout and has great chemistry with all the cast. In my eyes this is the successor to Setrakian it’s been fun watching his rise from vermin exterminator to Vampire exterminator.

Thomas Eichhorst former Nazi SS turned right hand man to the Master is constantly interesting, always creepy and oddly polite, he creates unease and tension in any scene he’s in. With Richard Sammel’s portrayal, you could watch him making a cup of tea and feel nothing but fear. 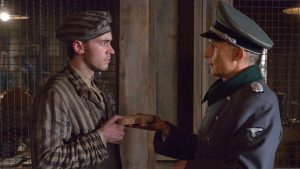 Zach….. Fuck sake the scenes with Zach and his Mother, for the most part, I found them boring and couldn’t help routing for some vampire to just eat Zach or hit him with a steamroller. Sadly the character continues to annoy me (through no fault of the actor), just poor writing giving him little to do but waste scene time or cause annoyance. His final appearance is just astronomically stupid and drives home that while Joffrey from Game of Thrones was bad this kid is far more anger inducing.

For the most part this show is fairly great at making the war look great, some of the scenes with the Navy seals hunting underground with Heat vision where epic, and the Masters son’s fight scenes where consistently awe inspiring. There is a recurring use of glowing eyes when the master takes control of a vampire drone that is such a brilliant but simple visual flair. The effects of the explosives used in two separate episodes really stood out as both a great final point on both one faction and the show itself. The flash back episodes variety was inspired this season from an Ancient Rome to World War 2 to 60’s Amsterdam all where welcome changes to New York.

Much like Arrow this is another adaption that favours the use of flash backs to expand on the story and contrast the characters before the outbreak with the horror they are going through. Which seems to be dropped almost entirely until we get to a hell of a dark episode, with some fantastic acting from David Bradley who plays Vampire hunter Abraham Setrakian. The character is consistently great in both flash backs and modern day, seeing what madness comes from his battle over the years was a standout point on the season.

Another fun and odd season with a few bugs, I look forward to another bout of The Strain next year. I feel that this is a show best watched in one go to help ignore some of the issues.  It’s easier to forgive when you are moments away from another awesome scene, but if you stop to think at any point you would go mad at some of the shows stupidity.