Final Fantasy is back after a strange absence, and it’s weird that Square Enix skipped from Final Fantasy 12 to Final fantasy 15 (you will not convince me that anything in between those two games is a real Final Fantasy game).

So we have had our first taste of what Square Enix has in store for us on the current gen systems (Final Fantasy wise I mean) and I have to say I am pretty impressed, and I do not say that lightly because quite frankly I was not at all impressed by what I was seeing in the years leading up to this games release. To me it looked like four, identically dressed guys in a car, it didn’t have that spark of colour or strange characters that we are used to from Final Fantasy, but I am happy to say I enjoyed my words along with a side of crow.

The story follows the tale of prince Noctis the crown prince of Lucis, on a journey to Altissia to be married. It is a political marriage to Lady Lunafreya, arranged by the empire as terms of a peace treaty. Noctis is accompanied on his journey by his three companions Gladiolus his bodyguard, Ignis his military tactician (and one hell of a chef) and finally Prompto, his childhood friend (and my new best friend).  There is of course more to the plot, but in typical Final Fantasy fashion there are a few twists and surprises, some of which happen fairly quickly, so I won’t go into the plot much more. 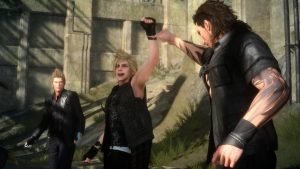 Like all good Final Fantasy games this one has a great story and some pretty interesting characters behind it. The main plot story is fast paced, but not so fast paced that the player feels they have been rushed, I mean if you want to stop your car in the middle of the road and do some fishing, then more power to you, you mad bastard. The characters are well written and they each have their own issues and flaws, you also get to witness them grow and change as people, this is especially true of the four party members. 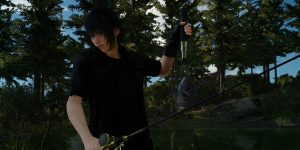 (I know the world is ending, but this stream has brown trout!)

Another thing that stood out for me was the many different side quests there are, Final Fantasy XV has taken on a bit of a sandbox feel in that regard, there are hundreds of quests all over the map and all with interesting characters attached to them. There are also monster hunts and dungeons to keep things interesting, so if you feel like testing out a new weapon or summon then have at it.

I also really liked the new battle system, combining the fast paced real-time with turn based combat can be difficult, but FF XV pulled  it off well, plus it’s a lot of fun to warp in and out of battle.

Final Fantasy XV has had its share of problems from the offset, a change in name, a new director and many changes to the game itself, both story wise and aesthetically. While it is clear that some of those problems have affected the game we have now to some degree, it is by no means a deal breaker. One issue I had was that I had missed certain parts of the story because they were hidden away in newspapers and reports littered about the game world, and then when a certain monster boss came up his identity was a mystery to me. Now you may well think it was my fault for missing the report, but frankly fuck that, Final Fantasy has proven in the past it can do this particular reveal without making it a bollocks. Oh and one last issue, don’t make the fucking jump button and interaction button the same, I can’t tell you how many times I tried to get in the car or open a door and just be left jumping on the spot like a cock. 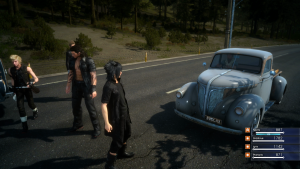 (Get in the car? I thought you said jump into oncoming traffic.)

Overall I really enjoyed the game; it had a wonderful heartfelt story with interesting characters and a fantastic world to explore with days of side quests to keep you playing well after completion.  Would recommend to old fans and new fans alike.