When I first saw footage of Horizon Zero Dawn I knew that it was for me, I mean come on, giant robot dinosaurs that you hunt with a bow and arrow? Do you take cash or is my first born child going to be sufficient payment. I was awe struck, here we had a brand new I.P with an interesting premise, that just so happened to look gorgeous.

Well, I have since finished Horizon Zero Dawn and I absolutely loved it, unfortunately  there  is now a hole in my life were this game used to be, and what’s left to fill it? Mass Effect Andromeda? Eguh, no thank you. No, the least I can do is give this game the tongue bath of a review it deserves.

Horizon Zero Dawn follows the story of Aloy, a huntress/archer/free-running badass, who, for as yet unexplained reasons, has been ostracised by her tribe known as the “Nora” (you do find out, I just don’t wish to spoil it). Aloy decides that she has had enough of these cave jerks and their bullshit, so she enters the “Proving” to “Prove” that she’s the best around, despite her winning, the defecation hits the oscillation and everyone ends up dead (it happens pretty early, not really a spoiler). After being nursed back to health, Aloy embarks on a mission to find out who was behind the attack, also who she is, and of course ride a mechanical T-Rex while she’s out and about. The story is gripping, interesting and has a few twists, so I won’t reveal anymore.

Graphics are not usually on my list when I review games, as I find that if the game is fun to play and has a great story to tell, I can overlook some graphical imperfections. Luckily this is not one of those times because Horizon Zero Dawn is simply beautiful, it’s bright, vibrant and colourful. The environments all look amazing, each being uniquely detailed with different flora and fauna to hunt and gather. And the facial animations are unbelievable; they are so expressive and convey real emotion, it really is a testament to how great the motion capture was. 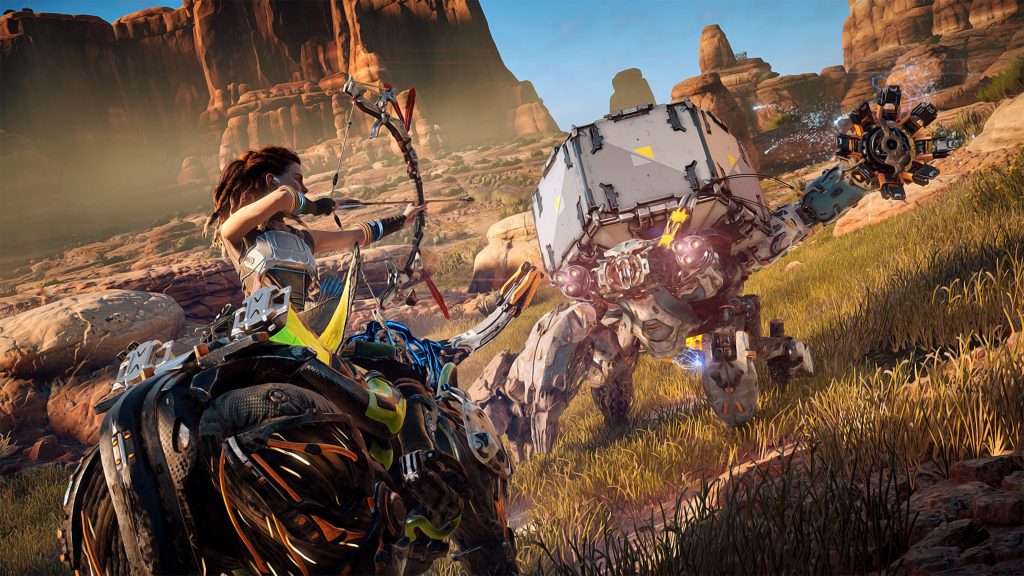 (Can we have one RPG without crab monsters?)

There are a number of things that stand out for me in Horizon Zero Dawn, but chief among them is how “Guerrilla Games” were able to take the open world idea, were the player must explore areas, expand territories (an idea that has been done to death in other games) and somehow managed to make it feel fresh and interesting.

I also want to mention the side missions, some rpgs can make their side missions feel like a chore, that we must do them to level up or acquire more currency, but I found the side missions in Horizon to be fun and interesting in their own right. They helped the world to open up in an organic manner, allowing the player to meet new characters and forge new relationships all while experiencing more of the game’s world. 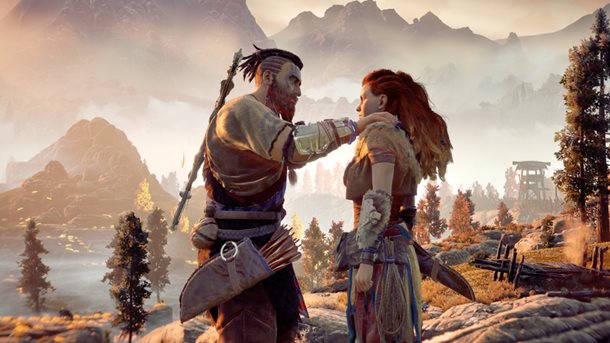 (What have I always taught you child? Go for the balls!)

In Horizon you are able to meet dozens of different characters, some are tied to the main plot, while others you would only encounter if you do certain side missions or explore certain areas. But one thing they all have in common is that they are all well written, with different wants and desires. Each of them feel different to the next and each has been given a well-crafted back story that the player is free to explore.

I also have to mention how great the musical score for this game is, from the hauntingly beautiful main theme song, to the more action packed battle music, it captures the emotion of any in game situation perfectly.

(Seriously, listen to this, it will give you chills!)

This list will be a lot shorter, but there were one or two little things that bugged me while playing this game, none of them deal breakers by any means, but worth mentioning none the less. The hit boxes are absolute bollocks, which always seems to favour the jammy bastards I’m aiming at, for example I hit a guy in the head with an arrow, dead you might expect right? Wrong, apparently it wasn’t the right spot on his head.

The zoom function is also fucked, if there is scenery immediately behind Aloy, like rocks or grass, and you zoom in with your bow and arrow, you don’t zoom in to whats in front of you,  oh no! You zoom in to the grass that’s behind you, because of course you do. 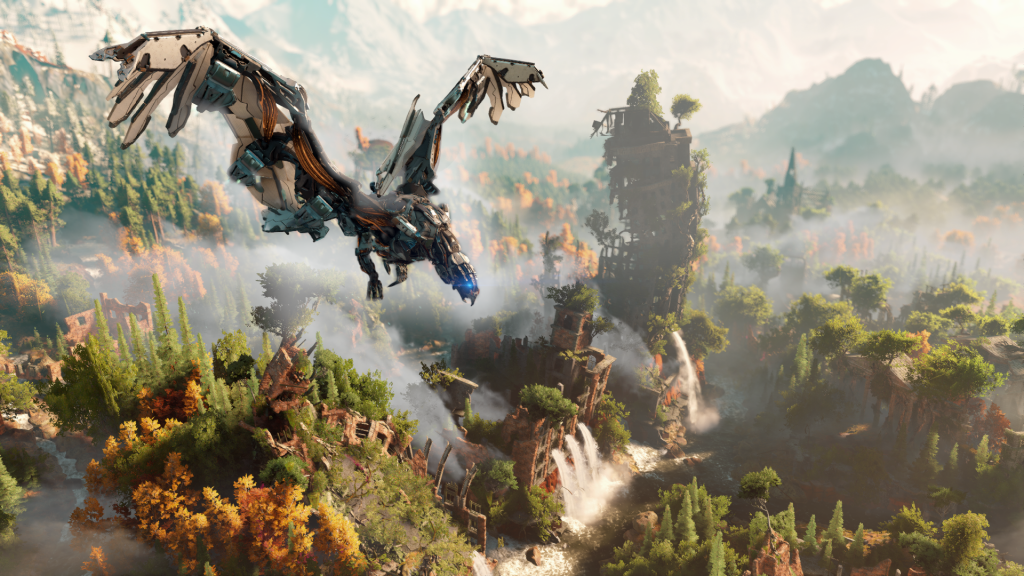 (And FYI all the flying enemies can get fucked!)

Horizon Zero Dawn is an amazing game, not only have “Guerrilla Games” written a gripping and original story, but they have created an amazing world that is graphically stunning and filled it with awesome characters and fantastic mechanical enemies. In fact I loved this game so much it has earned a place in my top 10 favourite video games of all time, get it played today!