Have you ever thought that your morning commutes are frustrating, with barely any information on display to direct you the right place, at the right time, surrounded by other confused people? Probably not so much now with all of us being grounded, but we’ve all been there at one point or another. Now, imagine if someone said out loud “I can do this better”, and the heavens cracked open, and Tak Fujii appeared in the skies to say “challenge accepted, mortal”, the result would then be STATIONFlow.

I’m going to come right out and say that I had a lot more fun with this than I thought I would. On first appearance it looks just like one of those typical indie simulators you see rocking around Steam, and it is an indie simulator on Steam, but with quite a substantial amount of entertainment value. Now, I’m not dissing indie games, as they are usually some of the most creative, reasonably priced and successful games around due to the hard work that goes into them. When you’re sitting at home all day with nothing in the hundreds of games you have, for about 3 or 4 consoles, to play, you have a sprained wrist and your slightly better half is strangling you with all kinds of attention, you’re not doing any work at all, then you can buy something new that actually feels a little like work. 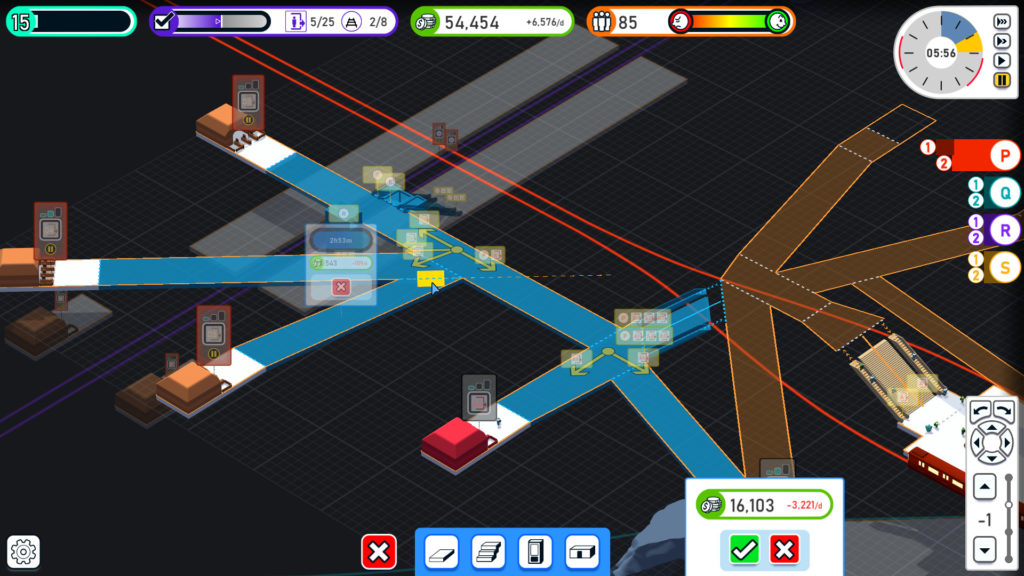 With STATIONFlow you get to create your own public transport station. DMM Studios, led by Tak Fujii (all hail the Tak Master), are taking a different direction from the typical JRPG and giving us something that actually feels very normal to keep us from going insane. We are working as the manager of a station, and will need to build a foundation of corridors, platforms and exits before expanding further and being the architect of a large public transport business. This game provides a simple, yet easy to understand, tutorial to help give us a head start before we are allowed to make our own decisions, and face the consequences. It’s not a simple case as placing a few corridors here and there, a few platforms and then bang, you’re done. Everything you build has a cost, taken directly from your funds, but it can be made back from paying customers as long as they find their way to the correct platforms. Without signs your passengers will have no idea where to go, so you will need to erect signs that will guide everyone to where they want to go, making sure their time travelling is as seamless as possible. The mood of the passengers is represented by a colourful gauge on the UI, going up and down as necessary, so it’s important to keep those little buggers as happy as possible. I’m sure we have all had some customer services related experience, and anyone that has can tell you that it’s almost impossible to keep customers happy, considering most just wake up angry and think that they’ll just go to their local supermarket, or phone up O2 or Vodafone, and project that anger on some unwilling participant in what I call “ The Rage of the Karen, Summoner of Managers”. 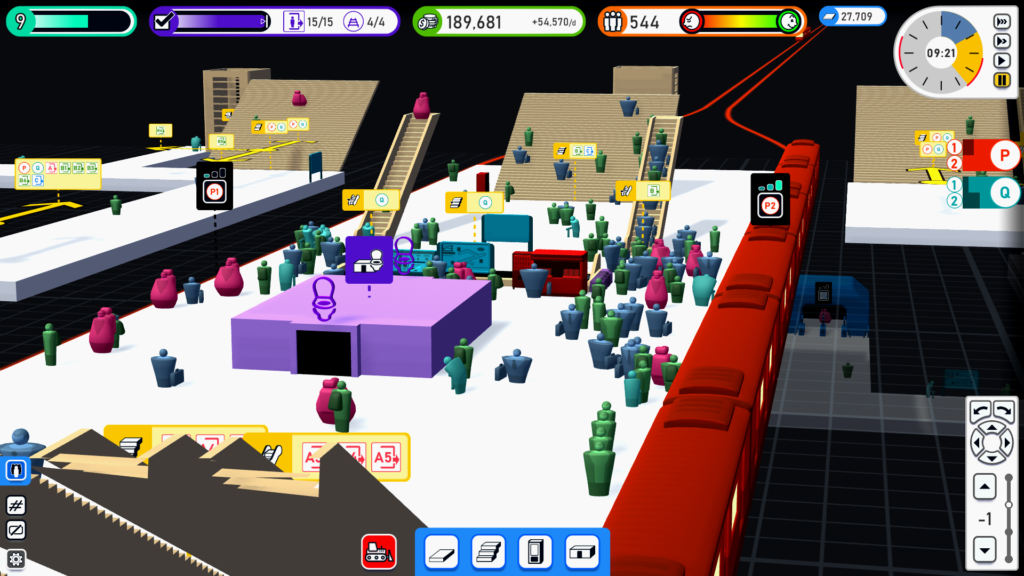 On a side note, I did half expect to be called by a Karen-like character which made me a little nervous, but thankfully it didn’t happen. You only start out doing the basics really, selecting where to put corridors, connecting the entrances, exits and so on, building stairs when moving up and down floors, but things become more complex with the more progress you make. As soon as you increase you start creating more platforms, increasing the number of consumers and the cost of maintaining their demands. I found that I had to start building escalators to relieve some of the congestion (mostly because of my poor design skills) which allowed faster movement between the many floors I created. I needed to set up bathrooms because there are even stats for people with tiny bladders, restaurants and vending machines, and more. There are so many little things to be aware of for these little game-piece people, meaning you are kept on your toes. The more you expand then the more you’re giving yourself to do. I barged ahead on my first try, cocky and sure of myself that I could easily put together a nice-looking station, one that would allow my passengers to split up early and make their way to their relevant stations, forgetting I also needed to make an equally convenient way for my passengers to get off their trains and make their way to the exit, which I did not make easy. I had spent a large portion of the budget already, and had very happy customers when boarding the trains but found the army of angry customers when they had nowhere to piss in the 5-mile-march they had to make to get out. (All the idiots buying toilet roll appear everywhere it seems.)

Admittedly I started a new game very often, because I was learning with each muck-up, and I was determined to get it right. Each time I got a little bit further ahead, and found that there were always more demands, with each in-game day bringing new challenges. Whenever my end-of-report came in I used it as something to beat the next day, but found it very challenging to build everything I needed, within budget, and to locate every problem. 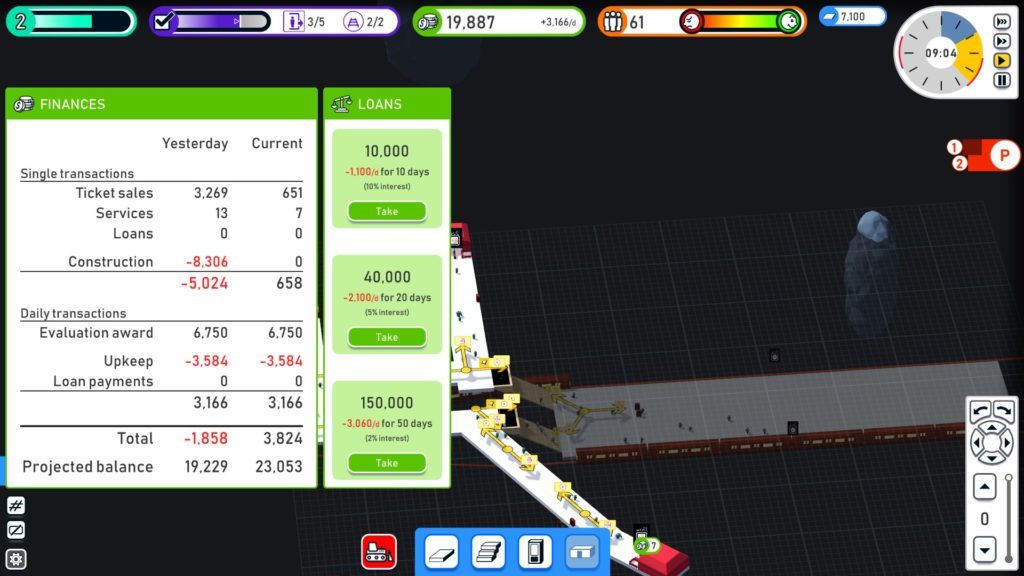 I only found out, before I started this review, that the clock itself can be paused which would have pretty handy during my initial learning stages, but it just goes to show that is always something to learn. That would be a considerable positive point for me, that this is also an educational game, involving strategy, accounting, hospitality and other skills. Considering the large amount of free time many of us have, STATIONFlow would be a fun way to develop or expand the skills needed to be successful. For anyone with a strategic mind this would still present a challenge, but luckily the setting can be changed before beginning a new game so that you may test yourselves, an incentive to work your way up through the difficulties to become the ultimate train station manager person (I have no idea what they’re called, and a Google search brought me to some dark places). 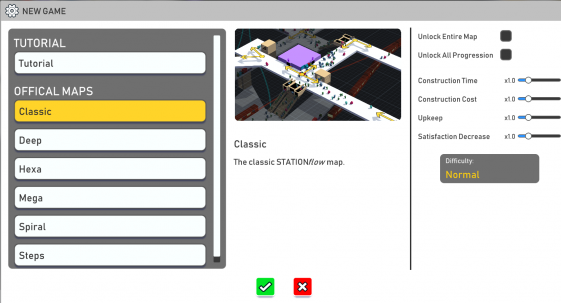 I really liked that I had a full view of the multi-layered 3D map, with no walls or rooftops so I had visibility of everything going on, and could zoom in and out, rotate and play around with my view. A word of advice, don’t do it too much. If you have no sense of direction like I do then you will find yourself easily disorientated and lost. A train station manager person should not be relying on his own signs and customers to find his way around. Although, it did serve me in finding out how good my signs were (they weren’t). Everything is accompanied by some light background music with a soft beat that is very catchy, but it’s the only music you ever hear. I would have liked some more variety in the same genre as it was very appropriate, but it was also stuck on repeat. Perhaps a Rocky movie montage tune on the final moments of each in-game day for inspiration? (These people couldn’t find Jesus in a church.)

Now, I get to some of the areas I thought were lacking a little. I had issues with attaching objects together, and it never seemed what I was putting together fitted properly. It might just have been the way I was doing things, especially under the pressures of a clock ticking away, but it would have been a great help if there was some little snap, or sound of things clicking together to let me know that I’ve done it correctly, and then I can confirm the build once I take a look at it. I used a lot of my time in the earlier playthroughs trying to work out how to put things together properly, only to find that I was looking at the wrong floor or something silly, but some sort of clicking mechanism, or confirmation of a suitable attachment would have went a long way in helping. The more customers there are, the dumber they tend to be. I’ve seen customers get lost, or confused, but was never given an indication as to why. I have seen some heading towards a platform, come to a sign and stop, then turn around and leave the way they came. If a customer doesn’t know something then I think a customer services section, to pass on info, would help in understanding their needs better, especially as the tension rises when it becomes rush hour. There isn’t a large variety of content, not that it mattered to me, but I can see that being a deterrent for other players, especially those that race to finish a game. There are a few stations that you can manage, or you can just create your own, so there is still some replayability, but there is no story or purpose behind what you’re doing besides challenging yourself, or a friend that might want a go. It would likely be very popular amongst a specific audience, even though I would recommend it to anyone, but we’ll have to wait and see. 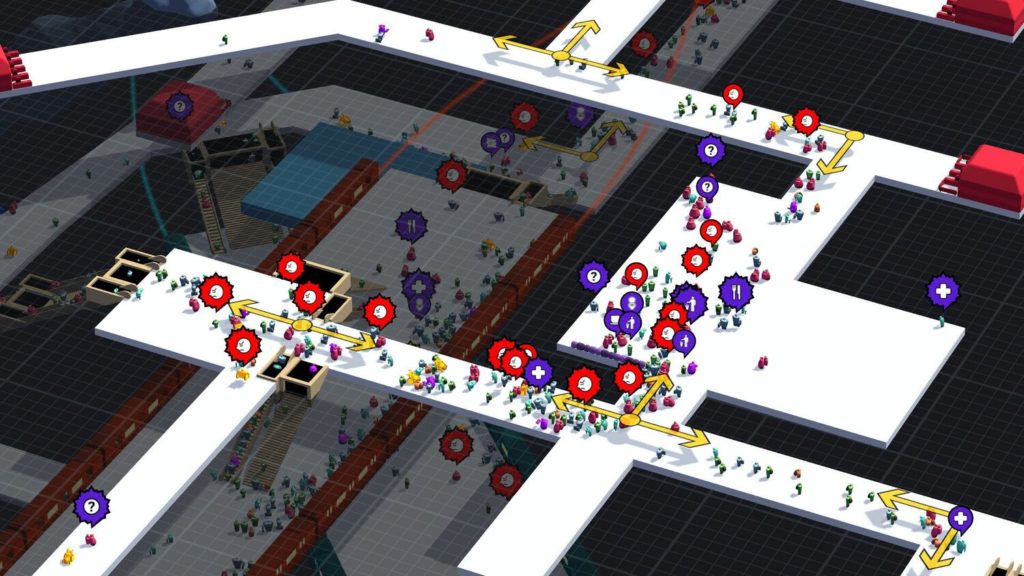 I can’t say much else because it requires you to play and learn for yourself. It was very addictive, but not the forever chasing a dragon kind of addictive. It was something that kept me focused on the very simple sounding objective of creating a seamless transportation hub, but also kept me alert when trying to make the smaller changes to improve the station’s performance. It won’t be everyone’s cup of tea, but I would advise that if you have time and would like to give yourself a challenge then give it a go. I had fun, learned some new skills, and how hard it was to try and please a bunch of little coloured blobs that always needed a coffee and a dump. If you can get past the sometimes-frustrating placement of construction items and don’t mind that there isn’t a story or anything to follow then you will really enjoy this.