The Uncertain – Light at the End

The world has suffered what's called “The incident”, though never is it explicitly explained how or why this has led to the robo-pocalypse. Despite the robot shells and a few cobwebs here and there you'd think this was an average day in lockdown, most definitely the cleanest apocalypse I've ever seen.

The Uncertain – Light at the End, is a continuation of the world “New Game Order” which was set up in “Last Quiet Day”. With one change being that we play from the viewpoint of Emily and her “friends” this time around. Although “fellow survivors” is perhaps the more appropriate term as everyone seems to hate one another.

When the game begins we are introduced to “Emily” and “Park” as they scavenge for medical supplies in a pharmacy which has inexplicably escaped being scavenged. Here you can find a selection of goodies to give to your group, including an inhaler for Park who has severe asthma. This could have been an interesting element to survival if it had ever been brought up again, but alas, no. 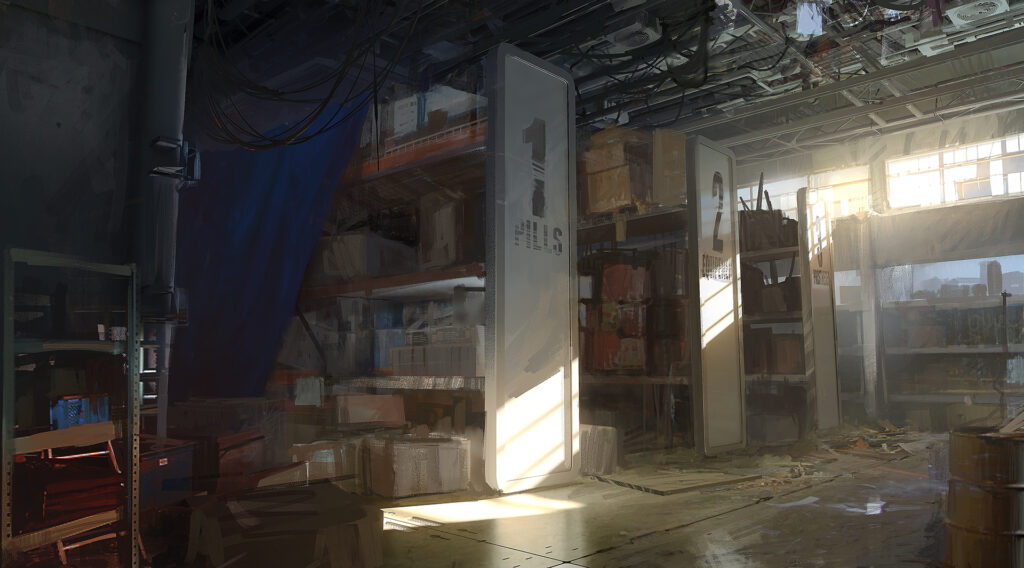 (“Ah yes the “Pills Aisle” this should have the generic medicine I need.”)

Within the pharmacy are several locked doors that halt progression, each of which must be unlocked to advance the game. This is achieved by solving various puzzles with varying levels of difficulty, but if, like me, you find a puzzle proves too much then a handy “skip puzzle” button is available. This is an intriguing concept because it means whatever your predilection for puzzles may be, you will never be left frustrated and can move on to enjoy the rest of the game. Unlike other puzzle games that obstinately halt progress until you either figure it out or more likely become to frustrated and abandon the game. 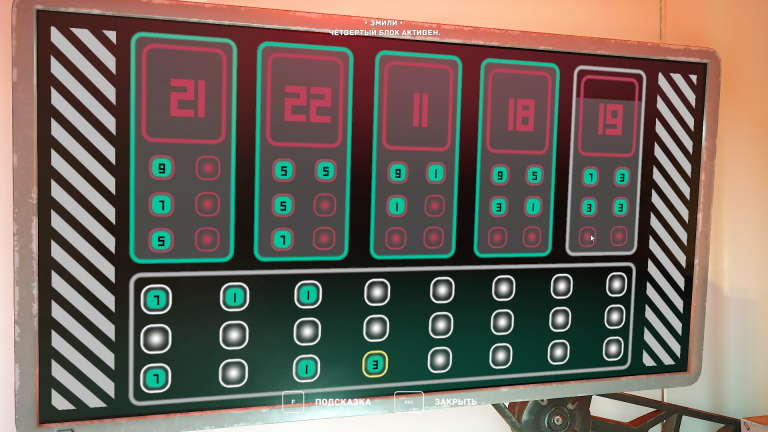 Eventually, you gain access to the store room in the back and find a few fuses to get everything up and running which also includes the security system that needs to be avoided via a quick time event. Unfortunately, there is no skipping this section, so if you fail or perhaps have slower reflexes you could end up having to start the whole process again. And given that the dialogue cannot be skipped, this could become an exercise in frustration for some players. 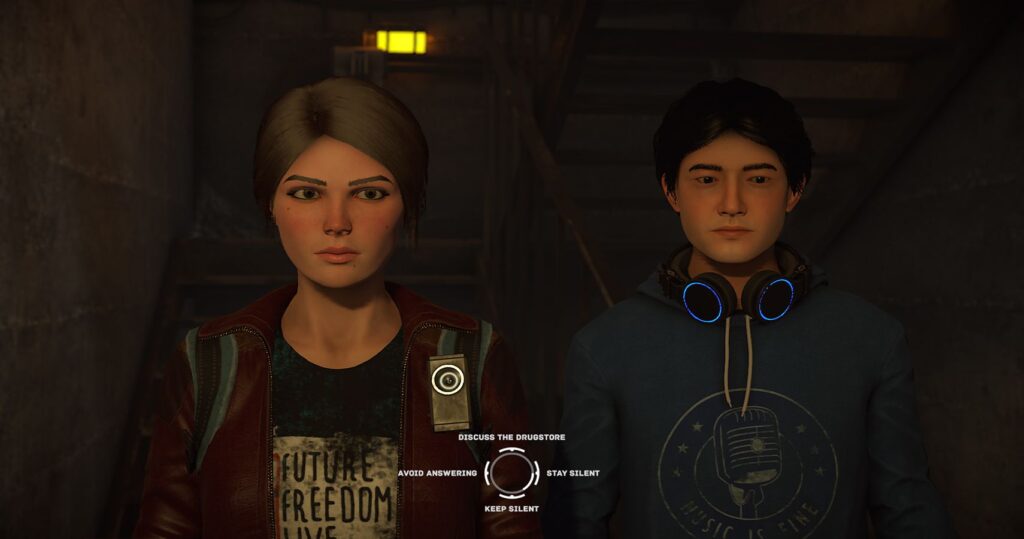 But if you manage to conquer the challenges you will eventual escape and return to the hideout where you will be introduced to the other seven members of the group. Out of them only 2 have any positive effect on the story, Claire and Brian, elderly folks who do their best to keep the peace and offer suggestions on what to do next. But because we can’t have nice things there are also 2 horrible arseholes in the form of Matt and Alex. 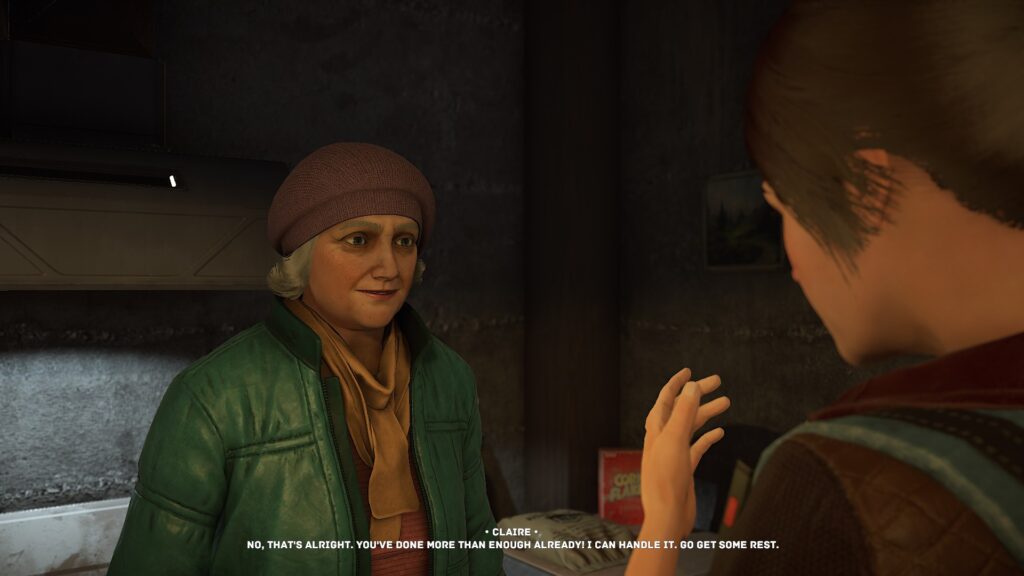 While I never really gelled or felt any sort of attachment to any of the characters, these two just wound me up. Alex is another older gent who hates that the younger characters are out there doing stuff and risking everyone’s lives, but who is happy to partake of the supplies, the geriatric fucker! He is also missing a leg and rocks a robotic prosthesis, which is brought up in every conversation including him, often directed at kicking Matt in the arse with it, which admittedly earns him a point from me because Matt is a wanker. 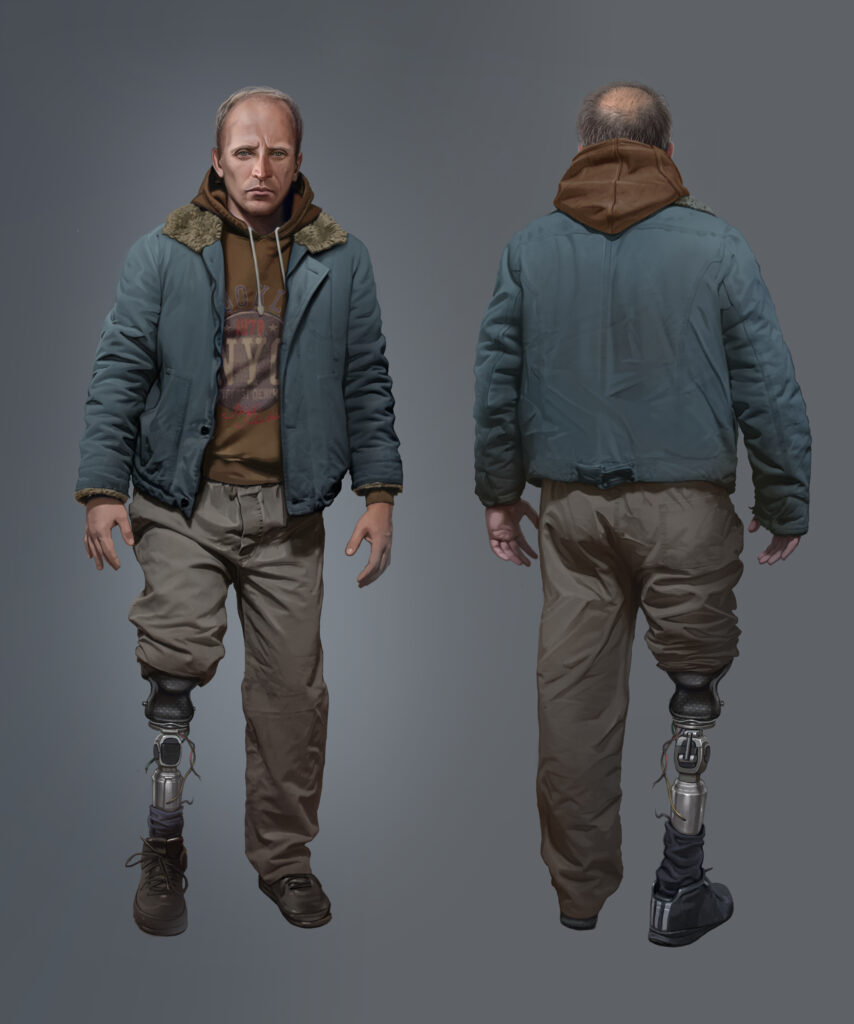 You can usually find Matt yelling at the elderly or suggesting it would be better that they fucked off because “they can’t pull their weight”, that is when he’s not being a sex pest.
Unfortunately, you are stuck with this arsehole for a very prolonged second mission and to make matters worse the game bugged out on me near the end of the mission duplicating the bastard and leaving me with several clones of this cock-womble yelling about how eldercide was underrated. 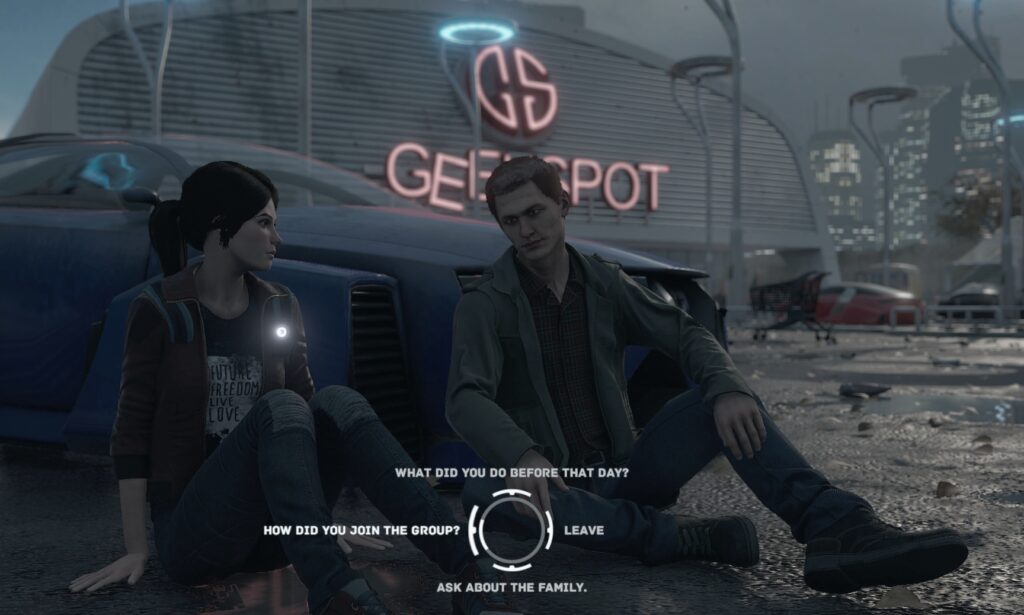 Speaking of the bugs, I encountered several throughout my time with this game, some which forced me to restart the program in order to fix. But there were numerous little ones as well, such as mouths not moving when characters speak, super loud sound effects and translation issues. Meaning subtitles and logs could be in a completely different language. 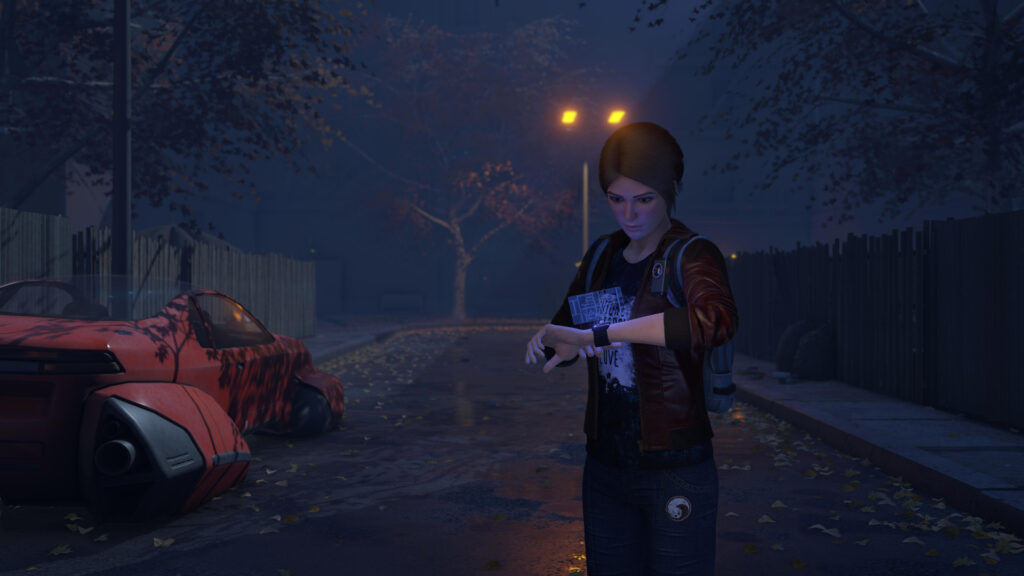 (“I could’ve sworn language settings were on this thing.”)

The game also doesn’t handle stairs well, as while you begin to go down, the character would maintain their high level rather than descending the stairs. This means the can walk through the air; granting them access to areas they shouldn’t have, which admittedly was a fun bug.
But fun or not these are issues that should have been caught in testing none the less and while it’s good that the game is still receiving updates, that they have managed to slip through the net is unacceptable. And given that it’s rather a short game, clocking in at the 4 hour mark, they are all the more noticeable. 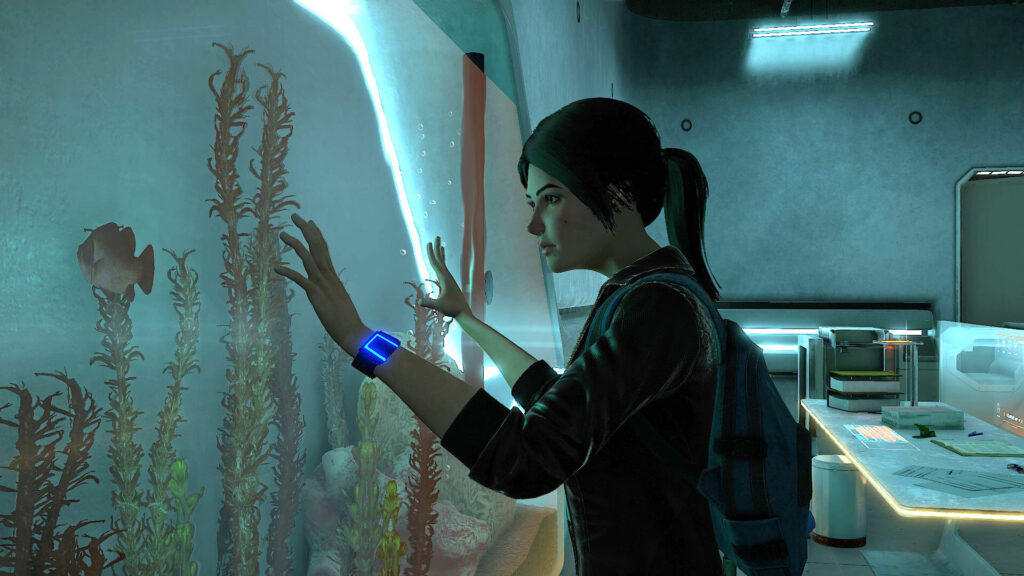 That’s not to say there’s nothing to enjoy, the music is fantastic and the environments are achange from the dank scenarios you find in other post-apocalyptic games. And have to say I rather enjoyed the way you can even use your in game watch bracelet to take photos. The puzzles are another selling point in the games favour being equal part challenging and fun.

The story, while not fantastic, does offer a bit of intrigue into what has happened to make the world this way and how it may be overcome in the future. The game does end on a cliff-hanger of sorts, which is a bit irritating as you never know if it will get paid off and I hope it does. 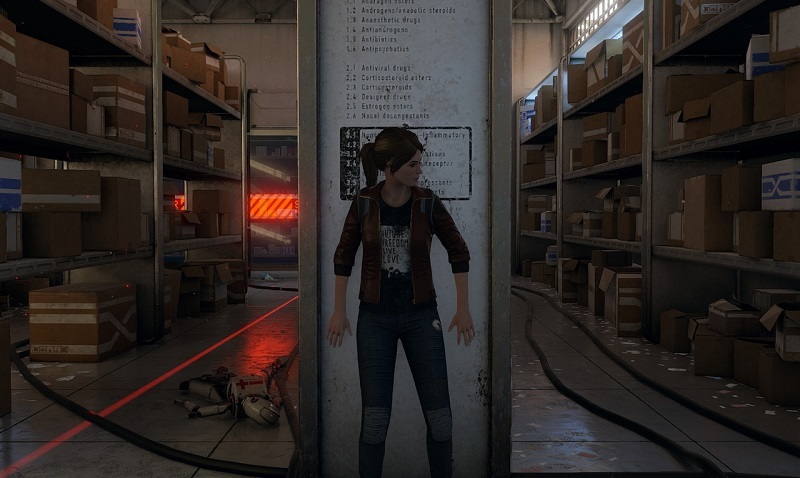 Overall, in its current condition, I couldn’t fully endorse “The Uncertain – Light at the End”, there is a good game buried somewhere in. But in order to get to the good ideas and interesting plot the player must wade through a sea of bugs and frustratingly unskippable audio logs.
There are definitely worse games in the genre out there, but there are also much better ones, hopefully with a bit more polish and a patch or two the better parts will shine through, but until that time it may be best holding off.