Our friends at Back Pocket Comics are back, with an all new chapter for Tarik, as well as a few tweaks to the original. Check it out!

You may remember some time ago we did a comic book review of Tarik, published by “Back Pocket Comics”. Well it was more of a first impression really as it was only the first issue and it can be difficult to do a full review on just one issue. Anyway, our friends at Back Pocket Comics have written another issue to Tarik, not only that, they have redrawn, edited and coloured the original and made it chapter one of two.

The story of chapter one remains largely unaltered; it is set in “the Kingdom of Altair” and follows the story of the titular Tarik, a member of the iron district. He is left orphaned as a young boy and must make a new home for himself in the care of a couple from the market district. However he never really fits in and finds himself bullied at the hands of some “noble” jerks because of where he comes from.  Tarik runs home to his adopted parents for comfort, but his father merely chastises him for ruining another parcel and insulting a noble, and he is left to face the music. For the crime of smacking a bitch, Tarik is sentenced to be whipped until “he learns his place”. 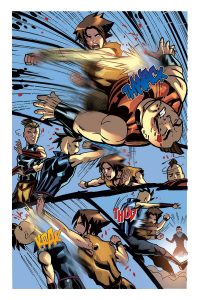 (They deserved it though, they scream 80’s movie bully).

He’s rescued mid punishment by Lord Camotz (leader of Altair), who councils patience and advises him to master his rage, if he is to become a “Magen” like his father (Magens being guardians of the Kingdom). It’s a great story so I won’t spoil anymore of it.

One of the things I loved most about the “remastered” version of Tarik is something that I had an issue with on my original review, character backstory and motivation. The original had one or two instances where I asked myself why a character acted a certain way or said something, but in this version everything feels more fleshed out, the characters and their motivations. For example, after Tarik’s altercation with his bullies, he returns home to be chastised instead of comforted by his adoptive father (Friedrich), previously I found it strange that this was his attitude. In this version however, he explains that this has happened before and Tarik doesn’t seem to understand that what he does could destroy his family, it really made Friedrich a more sympathetic character.

I also liked the artwork for Tarik, the art for the comic (done by Sherwin Santiago) was always good; each character was given a unique and distinct look to set them apart, now however, the comic has been completely coloured and shaded adding even more depth and life to both the characters and the world they inhabit. It is one of the main changes to the comic 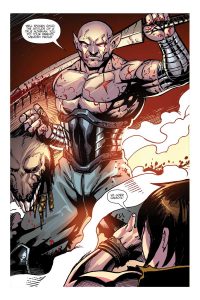 (Saved, by the power of my sweet abs!)

To be honest I didn’t have many issues with Tarik, and the one or two problems I did have with the original first issue have since been addressed. If I had to make one comment it would be this, in chapter two there is a sparring match between two teams, Tarik and Lorn vs another group. Lorn is beaten to the ground and his opponent says “I finally get to break that jaw of yours and shut you up”, but I don’t think he has previously spoken more than once in the whole comic. That however is a rather small issue and in no way impedes the story. 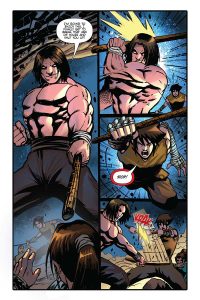 (You’ve had this coming…whoever you are!)

It is a rare thing to see artists/creators in any media take criticism for their work so well and even rarer still to say to themselves, “we can do better”, but I have to say the guys at Back Pocket Comics have done just that. They have taken a good comic with some interesting ideas, and from the artwork to character development they have improved upon it in every way possible.

They have created a fantastical world, filled it with some great original characters and begun a story that I will be following with great interest.