Tiny Troopers Joint Ops XL is a slow-paced shooter, ported over from mobile platforms. In between bouts of Skyrim and Mario Odyssey, it’s been a strange bedfellow to have in my ménage à trois of games on the Switch as its just kind of there, like the Old Hooker in Fable: The Lost Chapters, fun the first time you play around with it, but soon becomes boring and forgettable and leaves you feeling dirty.

The game starts off with a Tutorial mode which is mildly annoying, due to the repetitive music and noises from npcs, before throwing you into the main menu where you can choose from Soldier, Special Ops (which are essentially the same), Zombie campaign or Zombie Horde. The non-zombie related missions were quite dull and very samey with an odd difficulty curve for some missions, all of which start with a load out screen of two soldiers and optional upgrades, which all have stupidly high prices due to the games previous history with micro transactions and grinding, which is just flat out annoying. 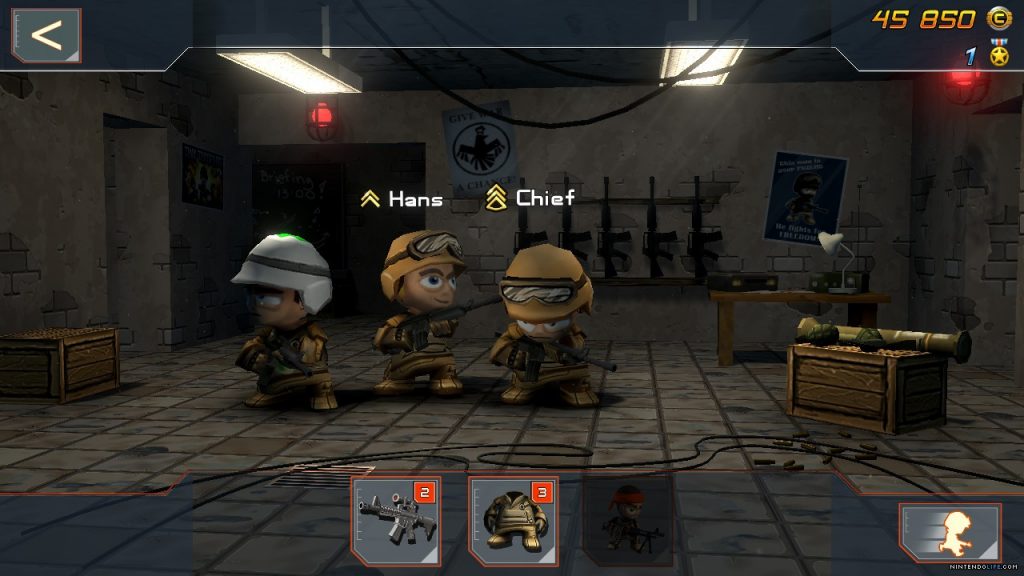 Once you get into the missions it’s basically walk to the thing, shoot the thing, then go find the green thing to leave the level, then the same repetitive victory music plays, which you can’t skip, and you slowly go mad, desperate to burn the game in a fire while laughing maniacally. Sadly, this was a digital download so uninstalling didn’t have the same effect for me. I know this is a silly thing to get pissed off about, but a pox on whomever wrote that victory song, it’s infuriating and gets caught in your head easily, days after not playing, it was still there, like the world’s worst earworm. Which is so frustrating because the background music on missions is awesome, like something out of Zero Dark Thirty or Mass Effect, but when you finish the mission the mood whiplash is so harsh, it’s like going from The Jurassic Park theme with a full orchestra, to some fat kid with asthma wheezing through a recorder. 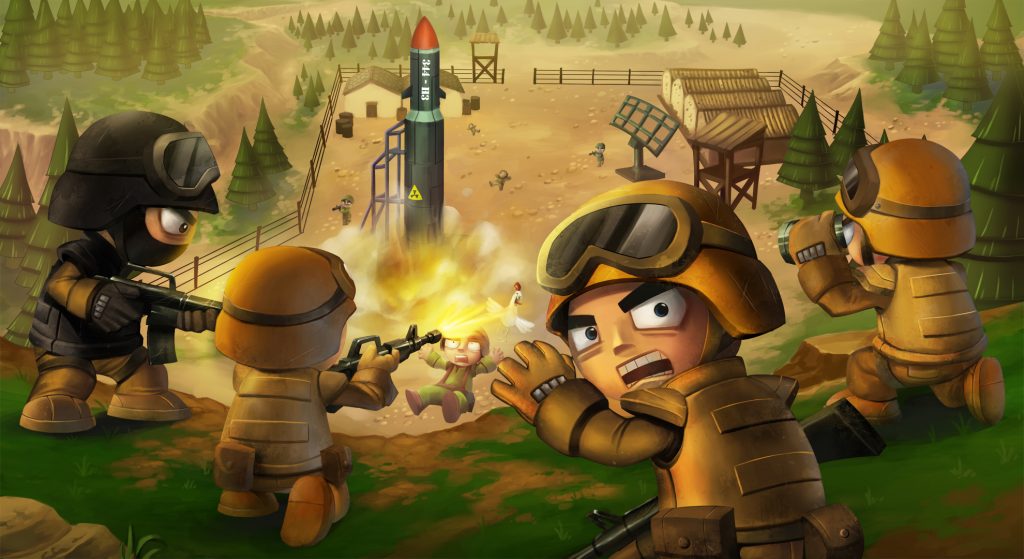 (“Johnson! Change it to Avril Lavigne!”)

Of course, there are some things to like about this game, I enjoyed how easy it is to just pick up and play whenever I fancied a quick game and I like that you can control multiple soldiers at the same time with the joystick or touch controls. It also looks impressive for a port of a mobile game, but does fall short graphically when stacked against other Switch games. I’m mentioning glitches as a good thing, because they rarely broke the game and afforded me no shortage of entertainment. Take for example the hilarious glitch I encountered on one of my first missions, one of my team members died just as we neared the level’s end, collapsing next to my remaining soldier who then proceeded to dance on top of his fallen comrade’s corpse. And I will admit to enjoying the cathartic fun of the zombie campaign, it provided a fun shift in atmosphere, and the levels where you had to defend your jeep helped to break up the game’s slow pace, but they aren’t enough to fix the many issues I had. 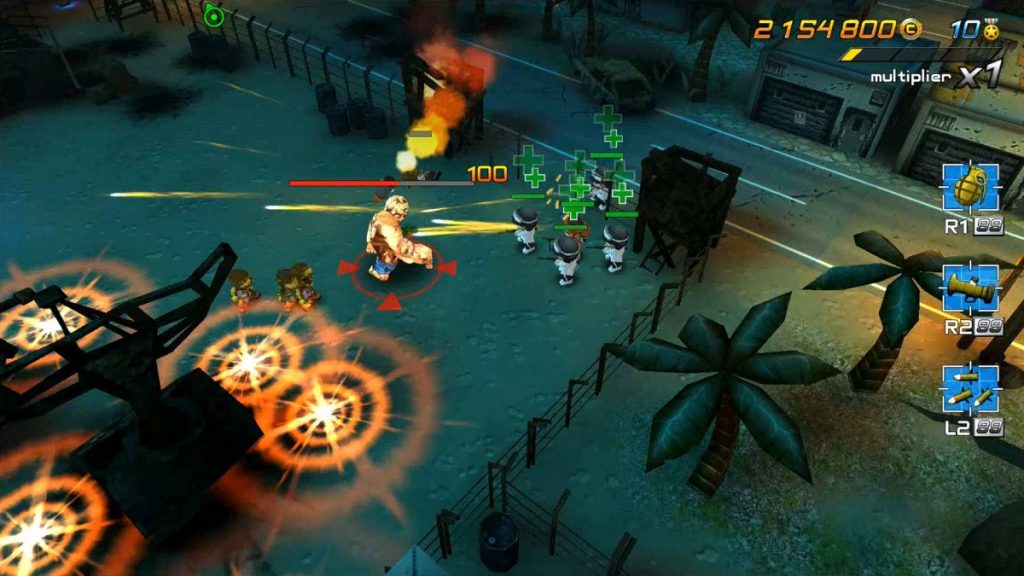 First off, horde mode just sucks, I didn’t find the constant streams of zombie chickens to be particular fun, especially when you have a flamethrower that’s as effective as a leper at a whore house, seriously, fuck the flamethrower, I may as well have shat in my hand and thrown it at them. I also found the level design quite lazy, sometimes you must go up hill to complete an objective, the trouble is when coming back down it you must pretty much retrace your steps, which feels like an attempt to artificially lengthen a level. And is seems most levels use some variation on this, like making attack points on opposite ends of the map and making you start in the middle, or rescue missions where you just repeat the same level only backwards. 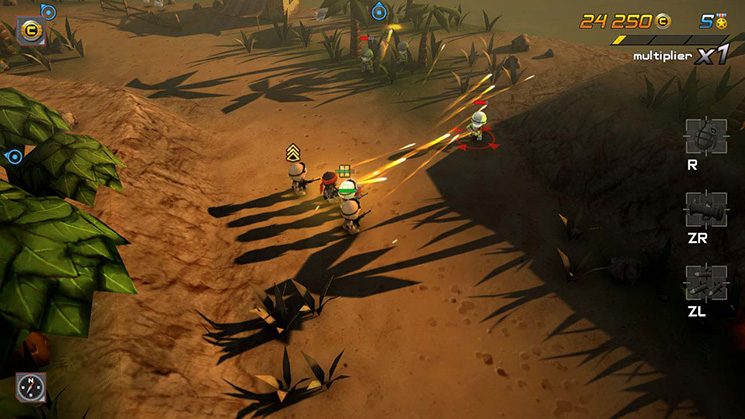 And a hearty “Bollocks” to the A.I as well, I lost count of the missions failed because soldiers walked into mines that are clearly marked and easy to avoid, bastards are like lemmings just desperate to die. This is clearly a microtransaction element left over from the original mobile game, where the player is expected to pay real money to purchase soldiers again, but the devs were too lazy to change.

But what frustrates me most, is there is clearly potential here, it’s just that in 4 years balls all has been done to warrant a purchase on the Switch, it’s a game that clearly could have benefited from co-op, hell, it’s practically set-up for it! Also, the fact you have to choose from spending money on weapons or walking speed shouldn’t be a thing, the speed increase should’ve been included as a standard and the game would’ve felt less grindy and boring. I only played on because I need to write a review, any one else will try the game for five minutes and return it. 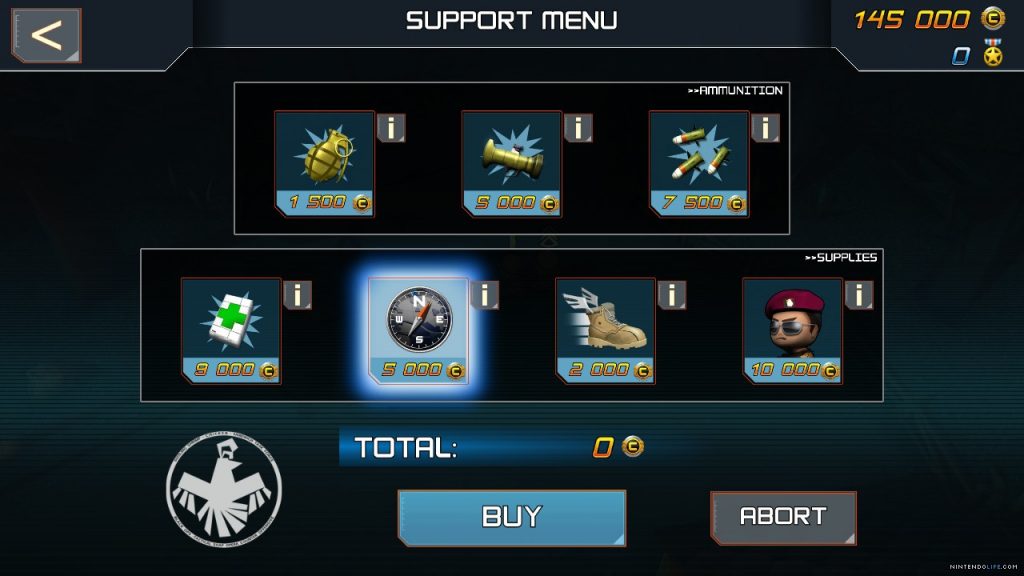 Honestly, any fun I had was wiped away by the laziness of the port, the weird character design and the sheer boredom of having to grind to get little in return. I have played worse games but this one hits a lot of my anger buttons, it’s been four days since I stopped playing it, but I’m still haunted by the invisible tank glitch that kept happening on one level, the dumb as shit A.I being blown up by mines and that terrible victory song. I would not recommend this game unless I really didn’t like the person asking and wanted to ruin their day.