“It’s a big one for Respawn Entertainment as they attempt to follow up on their ground-breaking debut: Titanfall. As you sprint up the walls like Tony Jaa on acid, you’ll lose yourself in this incredibly fun and inventive sequel.”

As a veteran of the original, I spent numerous hours jumping into my Titan and turning my enemies into a paste, and I had a lot of fun while doing so. I was a huge fan of that game, and a result I was terrified for this sequel. I didn’t see how it could even match the first never mind exceed it. How did it do? Let’s have a look.

After your customary training exercise to determine your difficulty, you assume control of Rifleman Jack Cooper. Like most military personnel in this fictional world, Jack wants to become a Pilot; an operator of the Titan, possessing superior equipment and immense fighting skills in battle. As your instructor lets you know, you’re not quite ready to become a Pilot, however when the enemy attacks, you find yourself with an impromptu promotion and thus your journey as a Pilot begins. 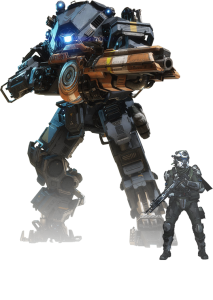 While Titans are the main appeal of this game, it should be said that playing as a pilot is incredibly fun. The seamless movement between obstacles and the sheer speed you are able to do it at, are a sight to behold. While this parkour style gameplay was present in the original, it has been improved on massively and avoids gamers longing to get back into the Titan. In the early missions you’ll find yourself running up clifftops and leapfrogging over canyons to reach your objective, with the manoeuvres becoming increasingly difficult as the game races along. It’s invigorating stuff and there is a sense of achievement when you make that difficult jump. One thing I didn’t like was that your Pilot automatically scans terrain and will provide you with a ghost Pilot to show you a path you can take. While this may not be available at the higher levels, it was present at regular difficulty, and took away the puzzle aspect of the objective routes. A minor peeve, but a peeve all the same.

I was pleasantly surprised at how involved you actually become with your Titan. While initially I found the dialogue to be a little suspect, it grows as the game goes on and you find yourself building a bond with your metal friend, BT. While BT’s internet connection is terrible (heh), you’ll find yourself becoming quite attached to this walking pile of nuts and bolts. I was quite impressed at how early you start to feel a connection to your Titan. When you strip back this extremely fast paced and frantic game, you’ll see it has a lot of heart and that’s a testament to the writers for making that a possibility.

The combat builds on the original and provides an immersive and meaty experience. Each gun has a personality and not just a different bullet speed. Especially in the earlier stages of the game, I enjoyed picking a new gun up off the ground, as I felt it gave me a totally different experience from the one I had before. This helped to keep the combat fresh and exciting. 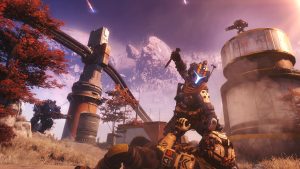 (What did I say,huh? One more fat joke and this knife was going up your ass!)

It’s an excellent single player mode and one of the best I’ve played in a while. A single player mode was a necessity to try and build on the success of the online-only Titanfall, but they’ve passed the test with flying colours. It’s quite short, but it’s both exhilarating and satisfying.

Now, on to the meat and bones of Titanfall 2. It’s a solid multiplayer experience this time around, don’t get me wrong, but something feels missing. After playing for a couple of hours I just didn’t feel the same buzz that I had from the original. The first thing that jumped out at me is that the maps are nowhere near as good. While I still have plenty to get used to, I felt they were a little too open and that I was a little too exposed. Unlike the first game, I felt extremely vulnerable as a Pilot. While this could simply be a case of coming into the game a few months after release and being behind the times, I didn’t like it. I prefer to feel competent as both a Pilot and a Titan, and I feel the sequel has lost a sense of balance that the prequel had. That being said I’m hesitant to mark it down much on this point; I could just be shite at the game, it’s a very real possibility. 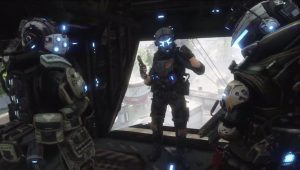 (So nobody has their giant robot with them? Well that’s just great Terry!)

One of my biggest hates in modern multiplayer games and especially first person shooters, is developers reducing the health pool of your character. It’s present in Call of Duty and is one of the main reasons I have went off the series. While it’s not quite as bad as its main competitor, it is present in Titanfall 2. I know that this is to try and cater for more casual gamers but it’s extremely infuriating. You have a fraction of the time to reaction than you did in the first. Leading on from this the Titans feel like they have a lower health pool as well. Their health also no longer generates, and this leaves you in terrible shape after just one fight with an enemy Titan. If you were good enough in the prequel you could possibly beat two Titans at once, but in Titanfall 2 if you come up against two you have next to no chance. I don’t quite understand this change, as Titan combat was flawless before, but it is what it is. If I had any advice for the developers though I would shout at the top of my lungs, “Don’t fix what isn’t broken.”

While I did have my gripes, much of what made the original game great is still there. The base modes of Hardpoint (Domination) and Attrition (Team Deathmatch) are still as good as ever. There are a lot more game modes this time around, but I can see that being scrapped pretty quickly as they don’t seem to be that popular with the fan base and it runs the risk of spreading players out too thinly across many game modes and turning them into barren wastelands.

Burn cards have been scrapped. Eureka! This is a good thing in my opinion. I constantly forgot to use these but when you did you had a huge advantage over your fellow players for a portion of the game. I’m all about a level playing field when it comes to online games. Burn cards have now been replaced by Boosts, but the crucial difference is that the boosts need to be earned and aren’t just handed to you for completing a game. This is a very positive change.

All in all it’s still a solid multiplayer experience. In my opinion it has taken a slight step back from the original, but the original was great, so don’t read into that too much. It has the potential to improve massively with better maps, and Respawn have already stated that all DLC will be free, so they have a big opportunity to put Titanfall 2 on par with the best online shooters out there.