Now, I know what some of you may be thinking; “Jude mate, it was released last year, so how would it be celebrating the 80th year which would be in 2019?”. Excellent question. Last year the digital copy was released at the end of November and was available to be purchased and downloaded via the PS Store and on Xbox Live. Now, we will be given the opportunity to buy the physical copy this September to mark 80 years of the Caped Crusader. Contained in this collection is the Arkham series triple threat Arkham Asylum, Arkham City and Arkham Knight (excluding Origins due to having a different developer), which includes all DLC for each, making them the definitive editions and an all-in-one package. Back in 2016 we seen the release of Batman: Return to Arkham which only contained the first two in the series. Now it made me wonder why they bothered to bring them back a second time despite already being available for 3 years but I welcome almost any excuse to encourage people to play one of the greatest superhero games series ever, and now Arkham Knight does not have to be bought separately.

This review will make distinctions between the originals and the remakes, without going too deep into each game, as well as the content included, but will cover my thoughts as I put on the Batsuit and started breaking virtual limbs. 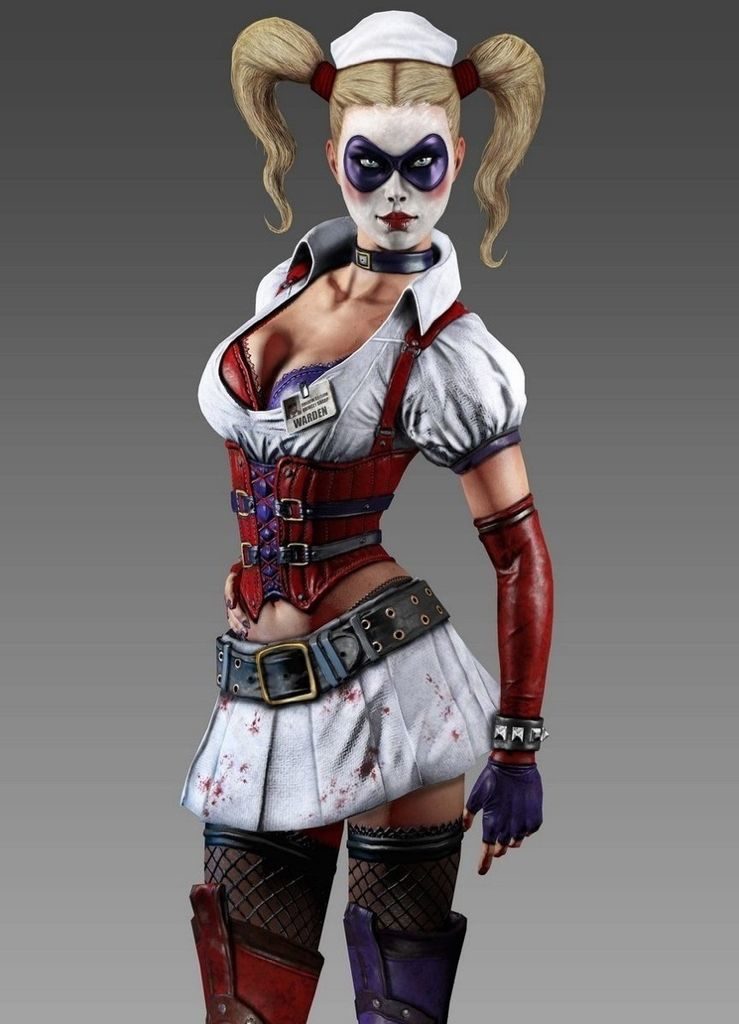 The Arkham collection will allow us to take the mantle of the Dark Knight himself as he seeks to overcome his worst enemies over three separate stories, each taking place over a single night but set years apart. You will encounter the well-known villains of Gotham and beat them to a bloody pulp for getting in your way to stop them from taking complete control, and fight through waves of steroid chugging thugs using your awesome variety of martial arts moves. Each game is bigger than the next with more areas to explore, gadgets to geek out over and new enemies to challenge your skills. You will be running around large sandbox areas, inside and outside, making use of the environment to hide, travel and reach your destinations. Each game plays much the same as the last but each set in a different environment and with more stuff to play around with. I tried my hand at Arkham Asylum first, preferring to play everything in order and because it was also the game that grabbed my attention when it was first released before I made my way through the streets of Arkham City. The graphics, music, animations, characters, writing and the entire story of the original gripped me from start to finish and never truly let go, as I found myself replaying the game more than once. But I was curious as to how well the remake made improvements, and I was not disappointed.

Firstly, the graphics are a definite improvement, looking much more detailed and even adding new minor details to fill out the world around you. The textures are much sharper and can be seen when you admire Batman’s sleek suit which is what I done every few minutes, appreciating the effort Rocksteady went through to bring this up to par with PS4/XB1 standards. Unfortunately, not everything looks as great. Although the graphics have went through a major upgrade the lighting is a lot brighter which takes away from the dark atmosphere the Original Asylum/City had. The darkness helped cover up any other graphical issues with its predecessor but now that everything is more visible than before it reveals those little inconsistencies. It can sometimes take you away when you are up close and notice that some textures don’t match up properly, with some smoothed out walls, doors and socks looking washed out. Sometimes there would be a puddle that was once obscured by the shadows of the adjacent buildings, but they now look like something that just didn’t render properly, appearing like a mud coloured blotch instead. (“The Dark Knight just had a bright idea.”)

Another problem that caught my attention was the slight stuttering. The frame rate is capped at 30, a questionable decision by Rocksteady because no matter how much I tried to ignore it I couldn’t help but notice the skipping frames, especially in the middle of combat. It would only be a minor inconvenience if you really paid attention but considering that this is supposed to be a remaster you would expect a higher frame rate and better performance. Luckily, this only affected Arkham Asylum.

I have noticed better animations when it comes to the fighting. The Arkham games made used of the free-flow combat system which focused on fighting against greater numbers using strikes, stuns, counters and projectiles. It’s a simple case of timing and combo building but never gets any less fun when you watch Batman use a large variety of moves to knock the ever living shit of those stupid enough to take him on. His moves are determined by the distance and position of the enemy, meaning you won’t have to see the same moves repeatedly. Original City had already sorted some of the clipping issues and animations that were present in Original Asylum, but they don’t appear in either game this time around. A welcome improvement for me specifically. I no longer uppercut my foes in the chest instead of the chin or elbow their shoulder instead of their nose.

It was sometimes comical watching an enemy ragdoll and fall unconscious because of a roundhouse kick to his hip but would get old fast. In combat, moving from one enemy to another is fluid, like poetry in motion, but navigating Batman around a small space is difficult. When fighting he is a ballerina moving without resistance, a very cinematic display, but he becomes an uncontrollable spaz when you try to turn and face something in order to interact with it, resulting in him making me do a full 360 in order to get it right. I would have hoped that that the same care given to combat would be reflected in his stiff movements everywhere else but alas that is not the case. (“Knuckle sandwiches are bad for your teeth.”)

Bringing the experience to life in a way that can barely be matched are the perfect voice talents of Kevin Conroy as Batman, and Mark Hamill as The Joker. Arguably the best voice actors for these two characters I was mesmerized by every exchange between the two and would wish for each cinematic to play out longer, just so I could listen to them some more. That is not to say that the other voice actors were sub-par, rather the opposite. Everyone played their parts well in pulling me into the story and the sound was just nice and crisp. I never noticed an issue with the lip-synching but due to the lighting some characters had very smoothed out faces. They still showed some emotion, but it would sometimes make their faces look like they were made of porcelain. I closed my eyes whenever the camera zoomed closer, except when Harley Quinn or Catwoman arrived, just so that I wouldn’t have to witness The Joker practice his ventriloquism. 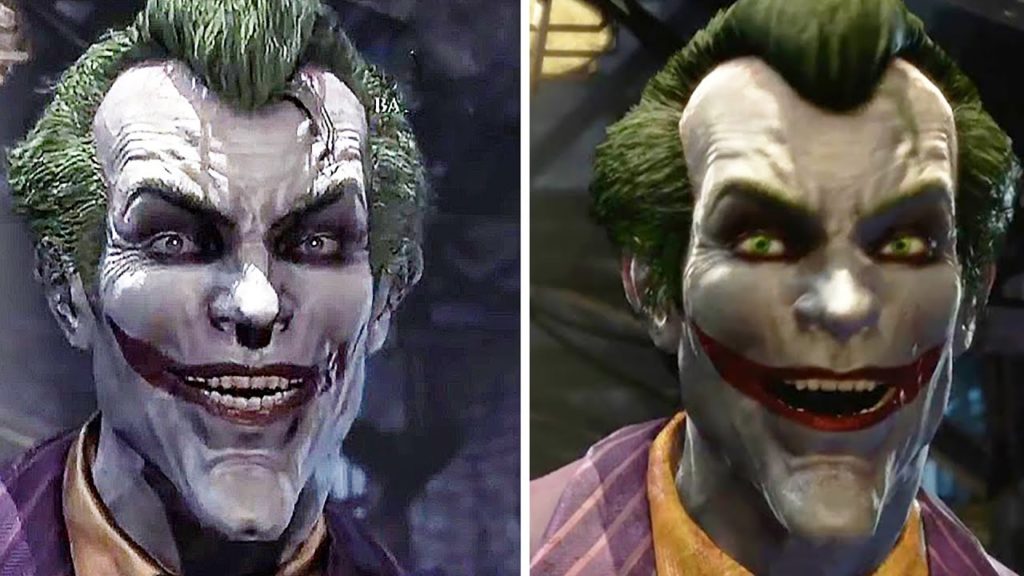 It certainly has been a treat delving back into the gothic world of Batman and was a slight challenge to try and acclimate to the changes. Experiencing the improved targeting of enemies and more responsive controls caught me by surprise at first. I would not be able to go back to the originals knowing how the slight improvements to the combat improve the pace of the games. I haven’t been anywhere near as frustrated with these remasters than I was with their predecessors. I used to grind my teeth to dust because Batman would launch a batarang at the enemy standing furthest away, or he wouldn’t register my input in countering an attack only to have a combo streak broken. No more will I have to pop a vein over something so small yet so annoying (unless it’s the Penguin). Boss battles remain largely the same, and in most cases can be a little boring once you have them all figured out. I still remembered each pattern and even which buttons would show up for QTEs (quick time events) so they didn’t recapture the magic of my first encounters, but I can see someone new to the franchise having fun on their first playthrough.

The DLC includes all the different skins which consists of the outfits worn by Batman in different comics, additional levels in the challenge modes and different skins for the other playable characters (challenge modes only). Having more things to do is a plus for me. I found that making my way through the challenges helped test how good I was at stealth, combat, quick-time events and I could use them to improve for when I went back to the main games. The challenges were fun to complete, even if it was only once each, and expanded on the components of the main game quite well. (“Try giving him a parking ticket”.)

There isn’t much to discuss with Arkham Knight. With it already being a PS4/XB1 game nothing new has emerged. The graphics are phenomenal when created for current gen consoles instead of being ported and with a much larger piece of Gotham to explore you will be able to speed around the tight streets the mother f***ing bat mobile Who has not dreamt of driving the coolest vehicle of all time? No one, that’s who. All-in-all this collection would be more like a Batman: Arkham Knight GOTY edition, that just happens to include the first two games of the series.

It would probably be difficult to market this game because of the previous release of Asylum and City as remakes that already exists and at a cheaper price. There is a very good likelihood that the owners of Arkham Knight have already bought Return to Arkham in order to expand their collection, negating any reason to buy this edition. It may appeal to those that have never played the series at all (shame on you if you haven’t) and would like to get all three main games in one disc/download. For those that already own Arkham Knight I would recommend saving your money and purchasing Return to Arkham instead. At least that way you can still own the entire collection, and if you were not overly fussed on Arkham Knight you can still return to…well…Arkham…Asylum and City and play through the familiar gothic themed battlegrounds. I felt a twinge of disappointment every time I noticed problems with textures looking blocky or bland and with the brighter lighting, they were all but unavoidable. I still appreciated the amount of detail added throughout each building and across the environment but can be offset by the changes in lighting and colouring. The gameplay is superb, and Batman does not hesitate to respond well to your button commands. His reactions are almost seamless as you fight, glide and grapple hook your way through each fodder filled section of the map. You might be a little turned off by the price, but this game still offers a lot of replayability and with it being three games in one you will not be bored in the slightest. If you have doubts, or already own Arkham Knight, then you still have the option of buying Return to Arkham which contains the first two games only. Having Kevin Conroy and Mark Hamill reprise their roles as the iconic hero/villain duo makes this amore authentic experience from start to finish.