A dark horse, PS4 exclusive, open-world title that puts me in the wilds of Oregon, USA to battle freakers (angry zombies), wild animals, and the worst of them all; humans. Humanity was cast aside, so I rid myself of mine in order to march through muck of this excellent game.

I want to start by pointing out that my interest in this was heavily punctured by the critics after the initial release, so it went under the radar for throughout most of 2019. Last year has been a poor year, but worse than that has been the over-exaggerated critique of a lot of games and movies, something that has seen me just turn my back on what critics say and put more trust in what other players think. I don’t know what drew me to this game; was it the survival aspect, was it the story, or the vast array of weapons? Maybe, it was my wife buying me the game? Who knows, but either way I suddenly found myself wanting to wait the length of time it takes a tree to grow for this to install so that I could get myself lost in a dangerous world. I haven’t played many horror-survival games, since none really appeal to me, but this was an oil discovery waiting to happen. From what I understood before playing was that Days Gone got a lot of updates to fix bugs that have plagued it since it was first released, so I would experience the best version of the game on my first play-through and I fucking loved it. I couldn’t put my controller down. It’s far from a perfect game, but it isn’t the buggy disaster I was told by some random twat on IGN that didn’t bother to revisit the game later. 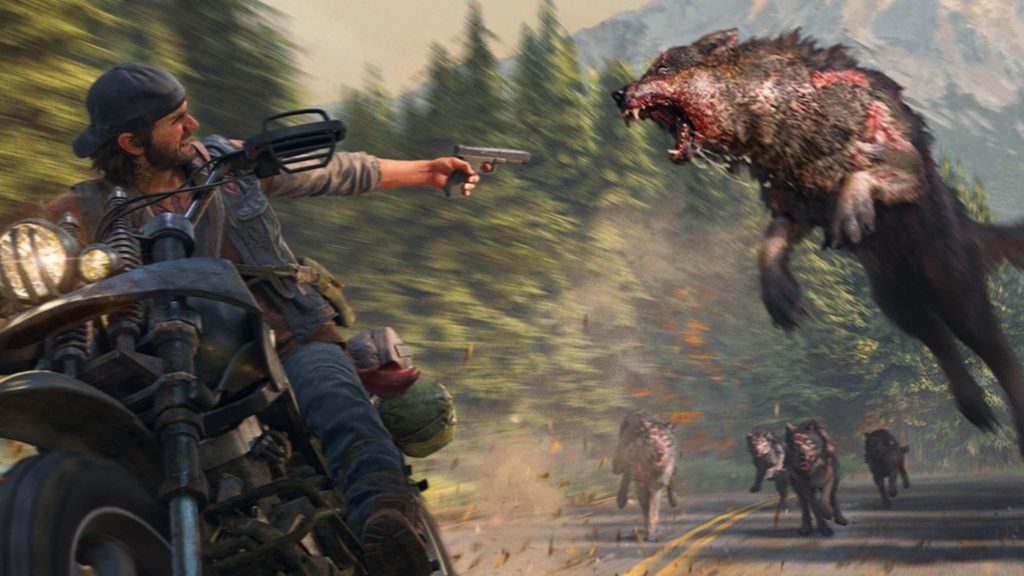 The main character, Deacon St John, or just Deac, is quite the relatable character. He was part of a motorcycle club and was a mechanic at a bike shop, but before that he was in the U.S. Army and had already served a tour of duty or two. I found him relatable because of his behaviour after his world turned upside down. He is frickin’ pissed off with how things have gone. He is sick and tired of everyone bullshitting each other, and he mutters his opinions to himself quite often until he gets wound up so much, he practically shouts them out loud. When the freakers came about and started munching on the meals with legs we would normally call “people”, Deac was trying to help his wife leave their little town in Oregon, but she was injured in the process. 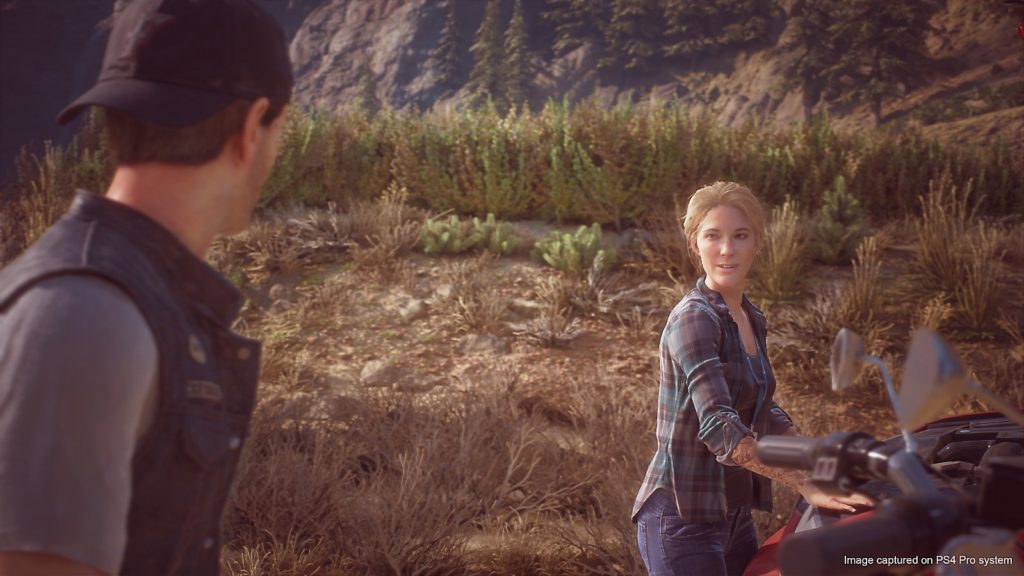 They found a helicopter owned by a fictitious government organization (that probably exists in one form or another), which allowed his wife to board. Despite there being enough capacity for two additional escapees Deac decides to stay behind with his best friend, Boozer, another member of his club. With the promise to his wife that he will meet up with her later the game fast forwards a few years, listing the number of days gone, giving me the impression that he was unable to keep that promise. From here the tutorial takes place, showing me the ropes and giving me examples of the purpose for each button input. Instead of learning to crawl before learning to walk, I learned how to drive Deac’s custom drifter motorcycle as he gave chase alongside Boozer, working as bounty hunters for different camps (factions composed of settlers) in order to secure payment and supplies. 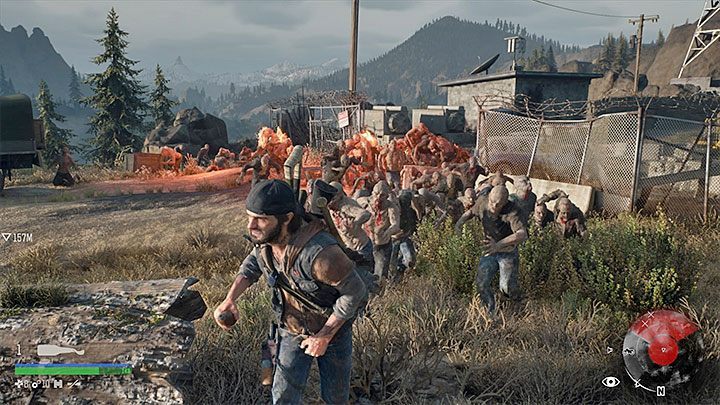 The training wheels stage played right into the introduction to the game world quite well and pretty much gave me the formula I needed to follow in order to survive. Usually when I get the freedom to roam I just fart around for a bit, but this time I wanted to find out what happened with Deac’s wife, I wanted to fill in the 2 year gap I missed and I wanted to see if I could find any doomsday preppers so that I can punish them for being right. I followed some of the main story missions, thinking I would get accustomed to how the world works, but then eventually I went off on my own when I started spotting opportunities to complete world events/tasks, such as destroying nests. 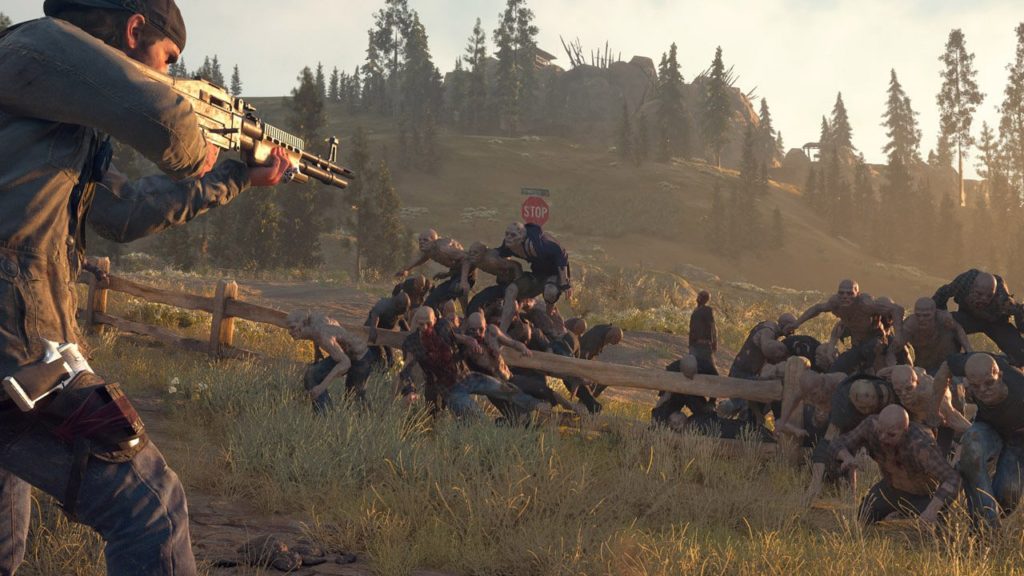 (“We don’t take kindly to the reanimated dead around these parts!”)

Freakers supposedly create their own little hives within small buildings/rooms with bushes, rubbish and apparently shit (a smell that Deac has always shared with me). Throwing a Molotov cocktail sets them alight, forcing the inhabitants to step out in a fit of rage in order to be killed and thus clearing a nest. Some hazard zones have more than one nest; clearing them all will make the area a lot safer and allow you to use another route for fast travel. The freakers are more abundant at night, making night travel a gamble as you risk getting attacked almost anywhere you go. Even more so when driving the motorcycle, for it is loud, very loud, and has a headlight that might as well be the beacon of Minas Tirith calling the horde of Rohan zombies to your location so that they may tuck in to your innards. 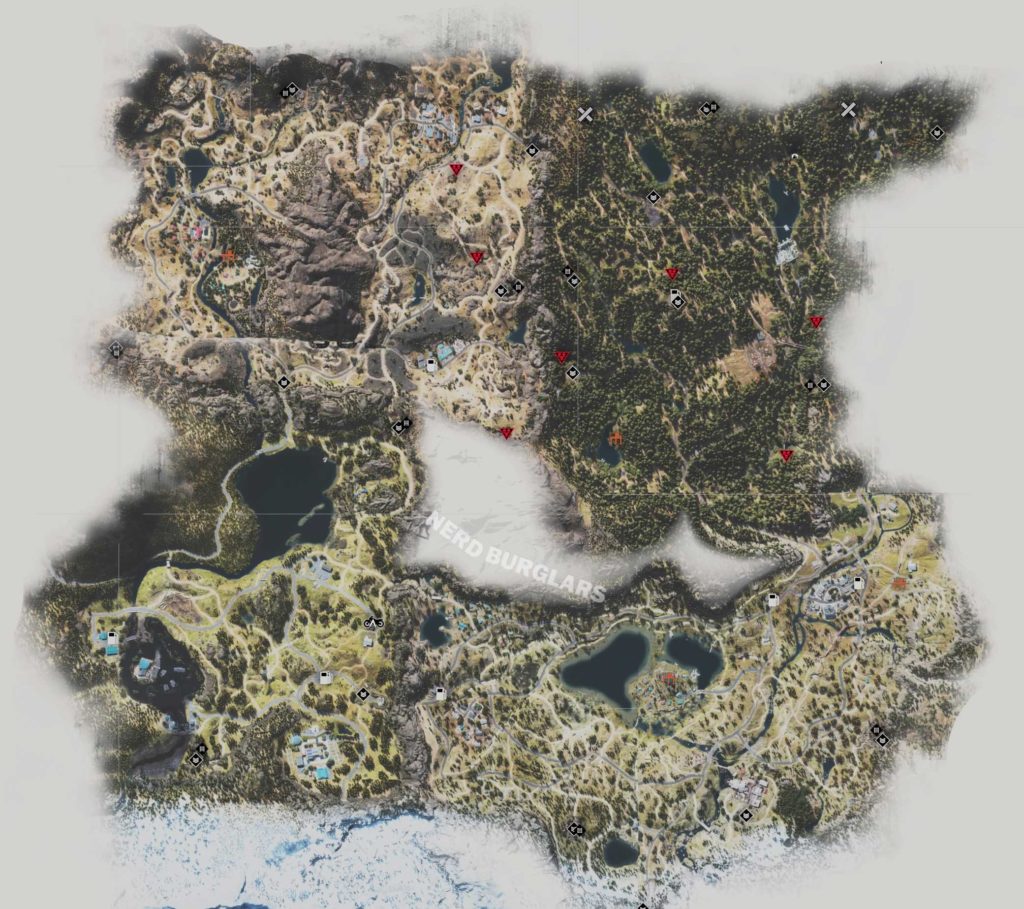 Killing freakers is quite easy, when there are only a few. A headshot would take down the bog standard in one go and a few shots to the chest will put them down for good, sometimes one shot ill just knock them over. Due to their nature they will only attack with their hands, teeth and even just throwing themselves at you. It’s best to use stealth kills to trim their numbers, which does take a lot patience because they twitch and turn like a Kyle after his 50th can of Monster energy drink that day, so trying to approach slowly, to reduce the noise made, can be a task. But, that’s how I like it. It should be a moment that instils a little fear into you. I need to plan my attacks, throw rocks as distractions, and kill what I can, because once they spot you, pretty much everyone knows exactly where you are. 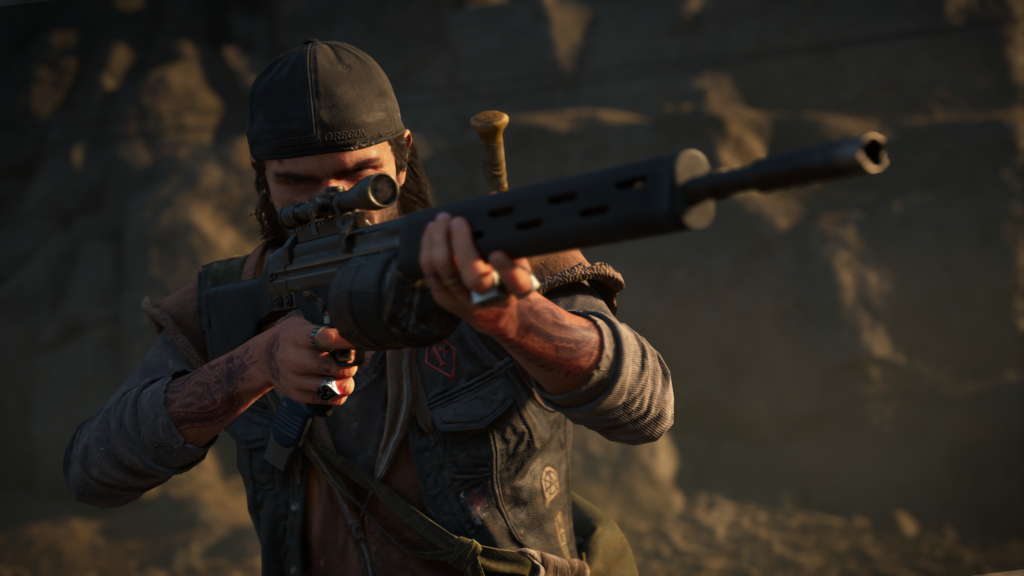 (Totally NOT over compensating!)

This is not because of the classical Assassin’s Creed stealth mechanic of every enemy sharing the same peripheral vision as one another, but because these freakers are fucking loud, like a Kyle after his 60th can of Monster energy drink. They screech and howl, sometimes making a Zoidberg-style whooping sound as they then race at you, like a Kyle that wants his next Monster energy drink. There is a good selection of weapons that can be found throughout but they tend to be of a poor quality, and ammo is scarce so every shot will have to count. Not an easy task when you have the aim of a one-eyed stormtrooper, and with Deac’s marksmanship reflecting the difficulty of a shot in real life when you are moving and trying to shoot a target that is also moving it adds to the intensity and gives you a real appreciation for any shot that lands. The higher quality guns are available for purchase at different camps, with a simple in-game currency called credits (same symbol as the American cent). 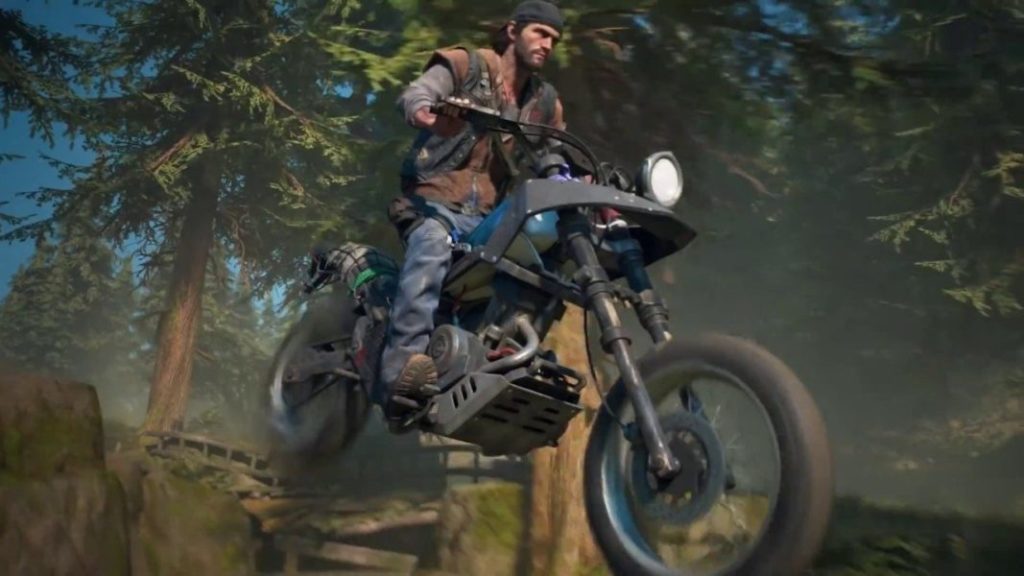 There is such detail in this game that makes it stand out from the bog-standard open world franchise, and those details are what make Days Gone something unique. Some of those details include the blood and dirt particles that build up on Deac’s clothing when killing or slogging through the mud, watching freakers and wildlife duke it out in thick forests, watching a freaker walk up to another that I just killed only for it to start munching away, the way in which they twitch and throw themselves around, Deac’s facial expressions when under different circumstances, and so much more. 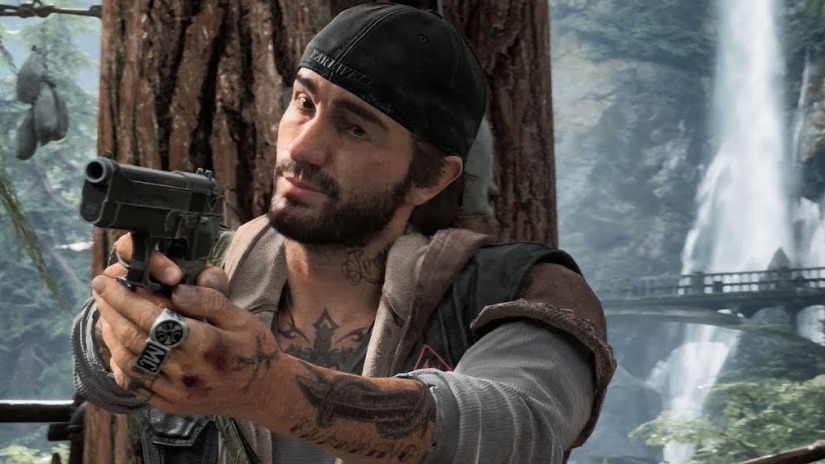 I could bang on about every little thing I noticed but these little aspects of the game would only be appreciated when coming across them yourself. Too many open world games (looking at you Far Cry 5) are all beautiful but with no real substance. Dynamic weather changes are just pointless changes between sunny and rainy, and have no effect on the world. Everything is just static and stagnant, never changing. But, here we have puddles forming when it rains, everything gets dirtier, the roads become more difficult to move on and going off the track and into a field feels like pushing a boulder up the mountain. 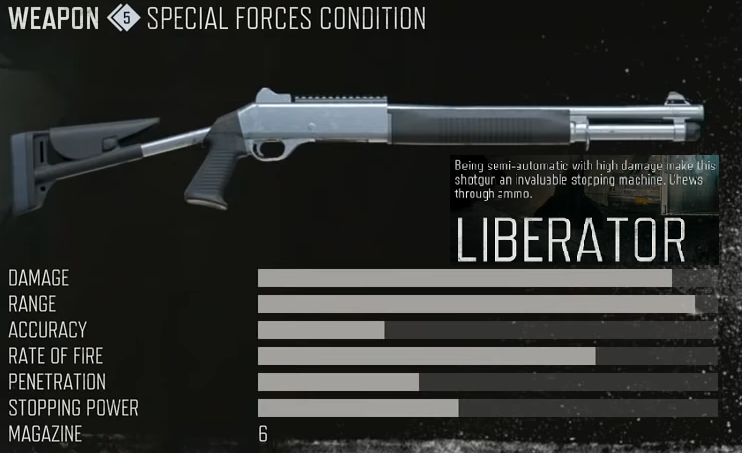 There isn’t much to dislike, and if you ignore the wankhats that call themselves critics then you will find that there are more hidden gems scattered, just waiting to be enjoyed. It’s not a perfect game, and it’s the little details that make this stand out, just enough. All I can say is that the world does feel a bit small, but at least it’s filled with enemies to kill and sights to see. The mission structure is very basic and doesn’t try to expand beyond “go here and kill that”. When you have done it once, you have done it a hundred times. There is a potential second instalment on the horizon, likely to be released on the PS5, and I would like them to make bigger changes to make this unique, take some risks, and ignore the haters.