If you’re missing the roar of the crowd at sporting events this summer or still sad about by the postponement of the Tokyo 2020 Olympic Games, a new party game from CATASTROPHIC_OVERLOAD, published by Yogscast Games, might just help fill the void.

Drink More Glurp, released earlier this month on Nintendo Switch and Steam, asks what would happen if aliens got the wrong end of the stick about the Summer Olympics. The answer is a wacky, colourful and frustrating as hell experience that will give your thumb sticks a rigorous workout and make your brain fizz with fury. I was all in on this concept. The premise is, aliens have binge watched so much ‘Earth TV’ they’re now convinced that advertising is the key component of any sports event. I guess seeing how us humans host our games in stadiums named after snacks like the Smoothie King Center and Dunkin’ Donuts Park or consume pay per views ‘presented by’ chocolate bars and KFC menu items, would cause some confusion in outer space. Chaos ensues as wacky sponsors take over the action and we end up with egg and trolley races brought to you by the ‘Flail Academy’ for etiquette training or timed events sponsored by ‘Sticky Wings’, in which you need to get pizzas to affix to your sticky sauce covered arms and race them over the finish line. 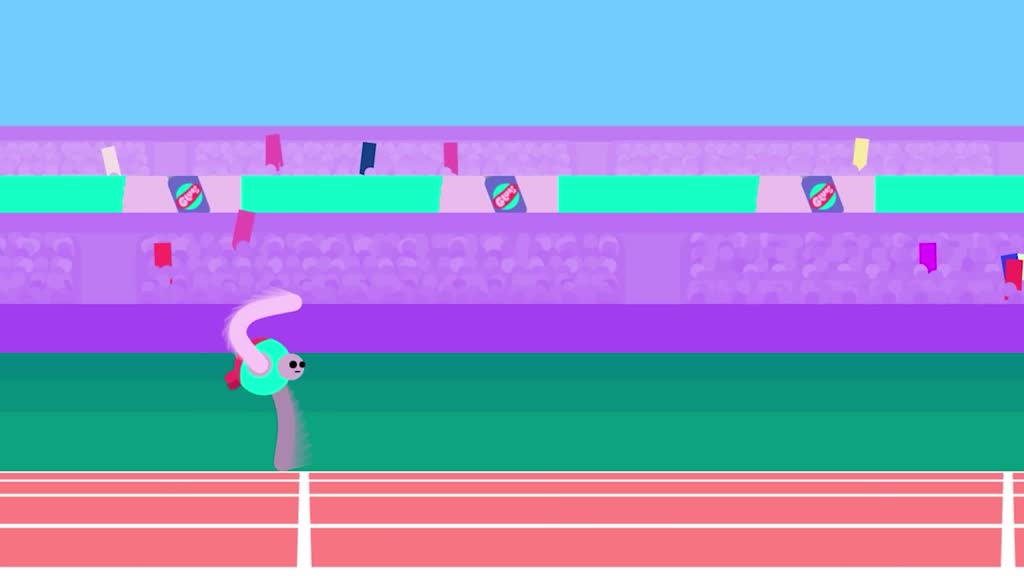 Sounds super easy, right? Nope. This is not your usual button bashing Olympics tie in. Using your thumb sticks, you’ll need to navigate your alien competitor – little spherical characters with long arms and stubby legs decorated in a bright, MS Paint colour palette – through obstacle courses filled with pyramids and jelly, and master a variety of props from confetti jetting ‘Turbo Gloves’ to rainbow lasers. Try as I might, I could not master these controls. Every time I felt like I was getting into a comfortable rhythm of swinging my long, flailing arms back and forth, one for each stick, I would hit a barrier and just sit back and watch, dejected as I fell off the leaderboard over and over again. I’m not sure I finished a single event that required me to grab onto an item and launch or carry it over a distance. And flying? Forget about it. ‘Falling with style’ tournaments however, like the freefall course sponsored by ‘Body Bungee Extreme’, were definitely more my forte. But be warned, even if you do manage to succeed at one challenge, there are so many different types and combinations (thousands, according to the developer), it won’t be too long before your technique comes undone.

For the first few tries, you can’t help but laugh as you struggle your way through seemingly impossible scenarios but those guffaws quickly devolve into frustration rather than fun. For that reason, Drink More Glurp definitely works best as a party game which is presented in a hot seat format with the one controller passed around a group of up to 20 local players. I was only able to try single and two-player modes and the latter was undoubtedly more enjoyable as I watched someone who loves traditional Olympics games and is typically a dab hand at most competitive sports, fail miserably at shooting colourful lasers while struggling out of a vat of green goo at the ‘Electromagnetic Wave’ tournament. It’s hardly the optimum time to be launching a pass the controller party game for large groups given the pandemic and all but if times were less sucky, I bet this could have been really fun. However, if you are playing solo, there is a leaderboard that allows you to see just how your attempts measure up against global players and you’ll get to feel more accomplished than you have any real right to when you see your personal best shuffle a little higher each time. I’ll be honest, I saw the ‘Did Not Finish’ result more times than I saw any form of medal throughout my numerous tries but for those of you who can master the gameplay, there are gold, silver and bronze trophies to be claimed. 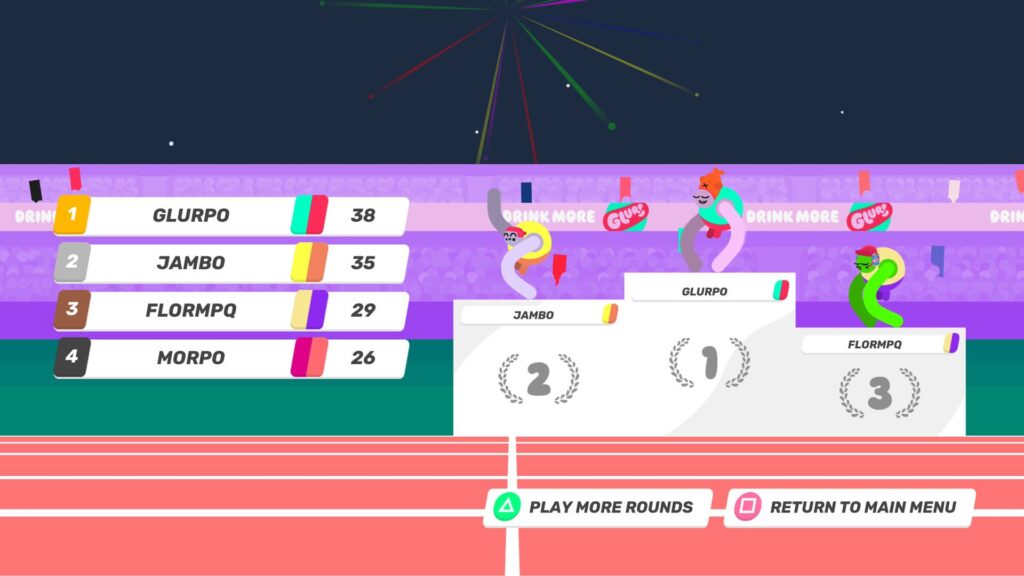 The game also provides basic character customisation which allows you to freely change the overall colour combination of your alien friend and add some funky accessories such as ice cream cone headpieces and trash can hats; the wearable avocado was my favourite. These add-ons don’t change anything about the game but who doesn’t love a bit of goofy dress up? I do love the look of this game. It’s simple, the colours are almost hypnotic, particularly as ads flash up between challenges, and there’s a charm to your alien counterpart darting its way around this array of absurd scenarios. 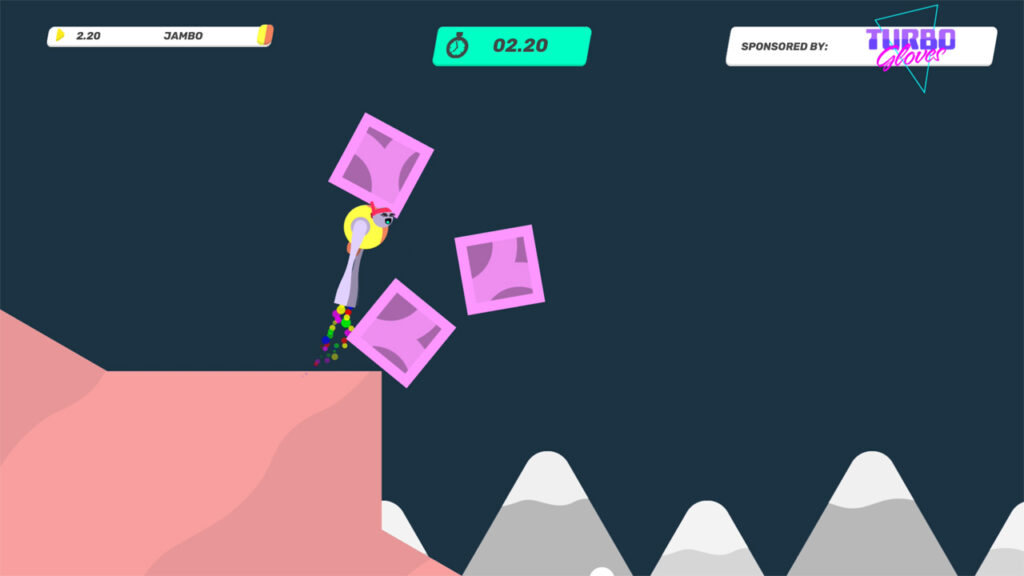 Perhaps the best part of Drink More Glurp is that, despite the gameplay feeling like it might as well be asking you to do long division without a pen and paper, it’s entirely uncomplicated in its instruction, which means pretty much anyone can jump in and play along on this unique and level playing field. The hardcore gamers will struggle as much as mums and dads playing along with their kids and that’s kind of the brilliance of this exasperating little title. Drink More Glurp is lots of fun for a very short spell and is probably best experienced with a larger group of people. For me, it’s not something I’m going to want to return to over and over again playing solo but then, why do I want to buy all of the merchandise all of a sudden? Damn, it’s working … Must. Drink. More. Glurp.