Following the trend of resurrecting games from our past CTR (Crash Team Racing) was the next PS1 classic to be remade for the current generation of consoles.

Originally developed by the producers Naughty Dog; the same team responsible for the original Crash Bandicoot trilogy, CTR was handed over to the developing team Beenox in an effort to bring back a memorable racing game that was high in demand following the success of other popular remakes. Not only have we been given the content of the 1999 release, but we have also been given additional content from the other Crash Bandicoot racing games that were released later such as Crash Nitro Kart and Crash Tag Team Racing. 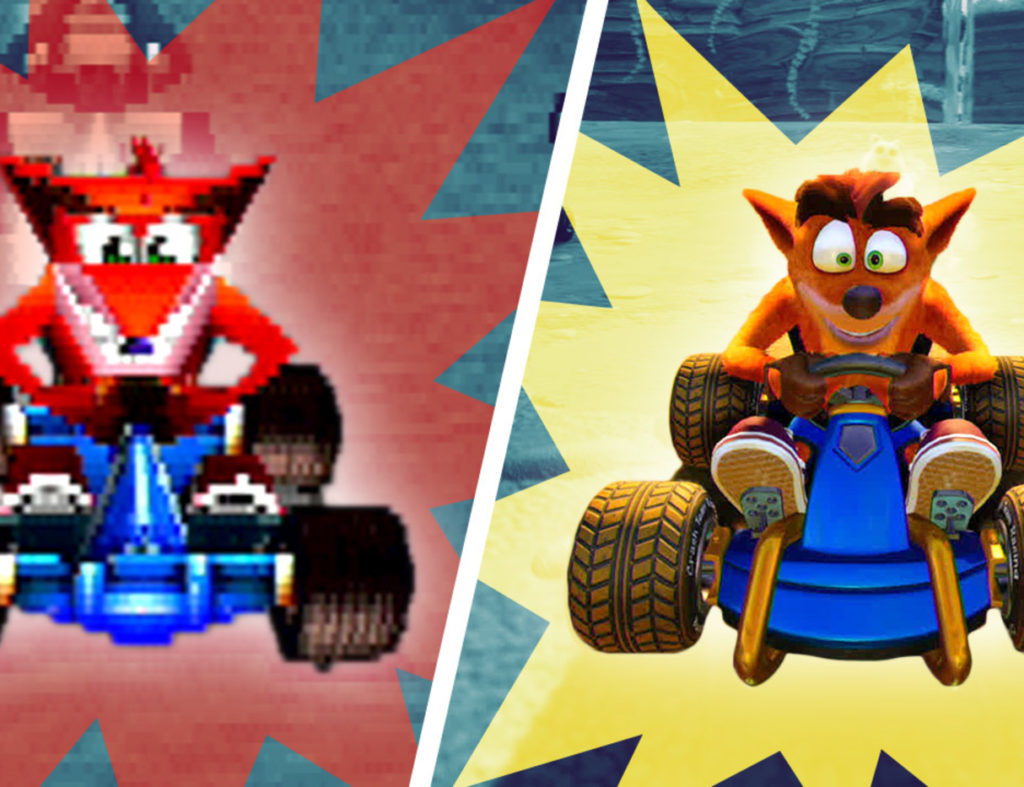 (“Before and After Car wash”)

By and large this is a kart racing game with multiple characters to choose from, a surprisingly decent number of race tracks and a plethora of customisation options that were not present in the original. Each playable character has their own stats based on speed, acceleration and turn to represent their strengths and weaknesses but ultimately it is up to the player’s own skill to determine where he/she may stand. There are different modes to choose from that help test, develop and sharpen your skills and you can choose to either play alone or with up to 4 players locally. This brought back the memories of a much smaller and less bearded me sitting on the floor with a smaller screen split four ways, my friends and I elbowing each other and calling foul but having the time of our lives. That same feeling crept over me as I raced through familiar tracks, listening to the same music and swearing repeatedly every time I was overtaken, blown up or anything that put me behind the competition.

In the spirit of bringing this game in with modern times there is also the new addition of online play. You can now blast through each track with other player controlled rivals and show the world how good, or bad, you are. There were no connectivity issues or lagging, and it is not restricted to playing with strangers. Friends can invite each other onto a private game and race together with a host selecting the track, number of laps and number of players that can join. The performance was seamless and there were no strange bugs or glitches throughout my experience. 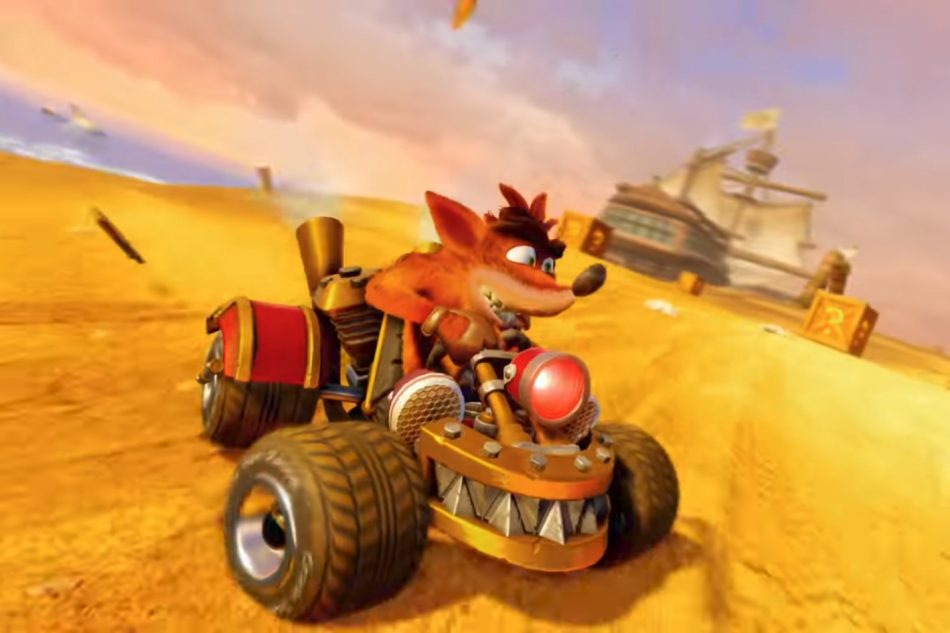 Gameplay-wise I haven’t noticed a big change. The controls do feel a little tighter and more responsive but there are a lot of tight corners that can easily catch players by surprise no matter how many laps are done. One of the more frequently mentioned mechanics is the power slide. You can use one of the top buttons to drift and build up turbo which, when timed correctly, can rocket you forward after releasing the button, helping with the sharp turns. I was unable to get the hang of it and would find myself falling behind AI players quite often, knowing that they had no chance of failing. This is where you would notice the differences in racing against other players and racing against the AI. Other players have the potential to make mistakes and there can be noticeable differences in performance on certain tracks that are deemed to be very demanding. No level will be as troublesome or damaging to your soul as much as Rainbow Road, but there are some competitors in that category. This doesn’t detract from the fun of watching people behave like lemmings and follow each other the wrong way over a cliff side. 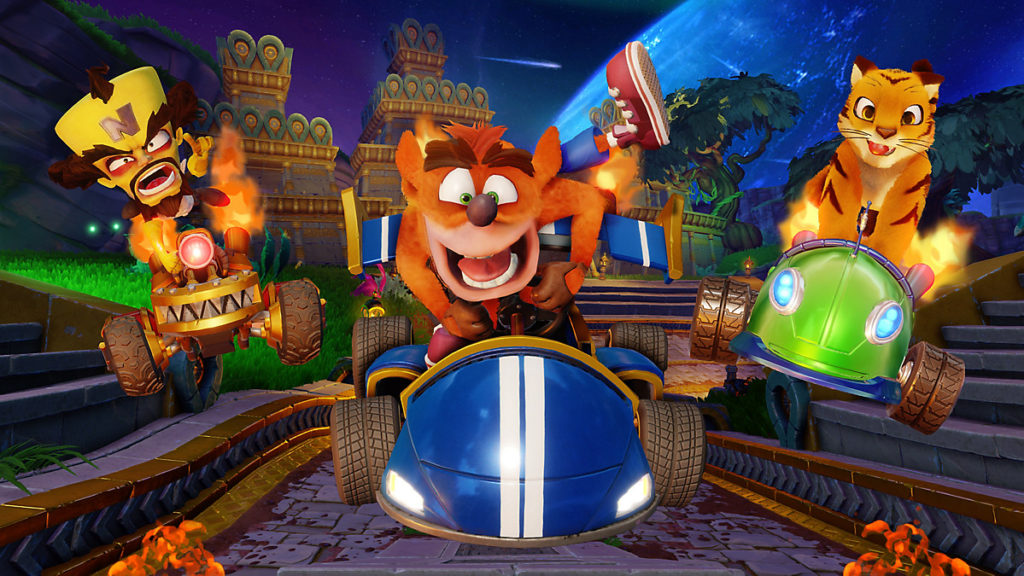 (“Everyone smile for the camera.”)

There are other obstructions placed throughout each level that can be hazardous when you come across them but they affect everyone in the race. Situated along each race track are crates that grant you a random “weapon” of sorts, much like mystery boxes in the Mario Kart games. These weapons can be used to attack players, leave traps or provide boosts of speed to help increase the mayhem. I found myself laughing maniacally as I waited for the right moment to fire a missile and send a player tumbling over the edge but in the same breath shouting inappropriate language after running through my own trap I placed earlier. These items add another layer of competitiveness because they are designed to help or hinder, ending friendships with the single push of a button but creating memorable moments that can be laughed at afterwards. What is concerning for me is that the random assortment don’t appear to have any consideration for your position. You could be in first place and gain the combined speed increase and invincibility with an Aku Aku mask (Uka Uka for villain characters) or last place and get a nitro box to drop behind you, sometimes getting an item that doesn’t help at all.

I have sometimes found that the given items are not very effective when you are falling behind. Sometimes homing missiles and speed boosts are not enough to change the outcome if you are struggling to get ahead and the main determining factor of success appears to be how well someone makes their way through the track without crashing or falling. This is more noticeable when you are given a weapon that isn’t useful for your particular situation. 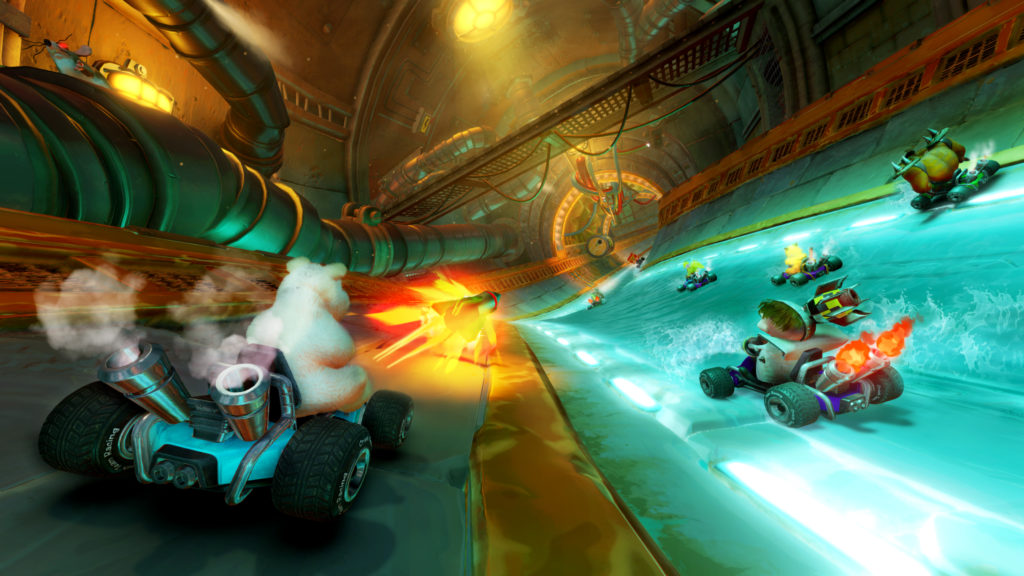 Sometimes falling over the edge once provides enough time for two or three players to overtake you due to the time it takes to be placed back onto the track. I would have preferred an instant respawn close to the falling point because those with a low acceleration stat will find it even more difficult to build up speed and try to regain their position. Despite the difficulty I was aware that my lack of skill also played a part in my performance.

I had plenty of fun perusing through all of the characters, their different skin options, the karts, wheels and more, reminding me of a time when we earned something new and didn’t have to climb over a pay wall, at least with my own money. I was almost taken aback by how much was available and the perfectionist in me was determined to have everything. Playing through the story and completing challenges will grant you items that are instantly accessible, some tailored to the character you are playing as. They are mostly cosmetic and do not offer any advantages but they just look so cool when you can give your kart a very colourful appearance. As we all know, adding a flame decal to the side of your kart does make you move faster, it’s just science. 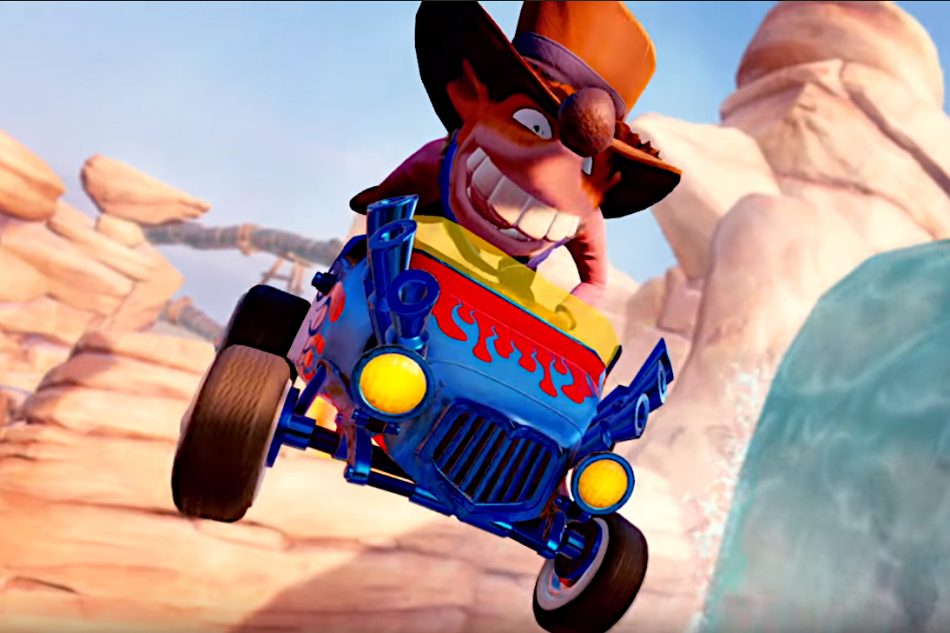 The only way to truly appreciate the work that has been put into this revival is to draw a side-by-side comparison and you can already see how far we have come in terms of graphics and design. Every track is visually breath-taking and Beenox have made some adjustments to improve the amount of detail, by adding so much more personality, life and colour on every level. There are now background characters, buildings, landscapes in the distance and more that can be seen during any race. Unfortunately you cannot just stop to appreciate the views, unless you are comfortable coming in last place. Each character has new animations and facial expressions. They will shout out different lines and phrases, make sounds of discomfort when attacked and move around their kart as you turn corners and jump off ramps. With that, everything feels more lifelike and less static. 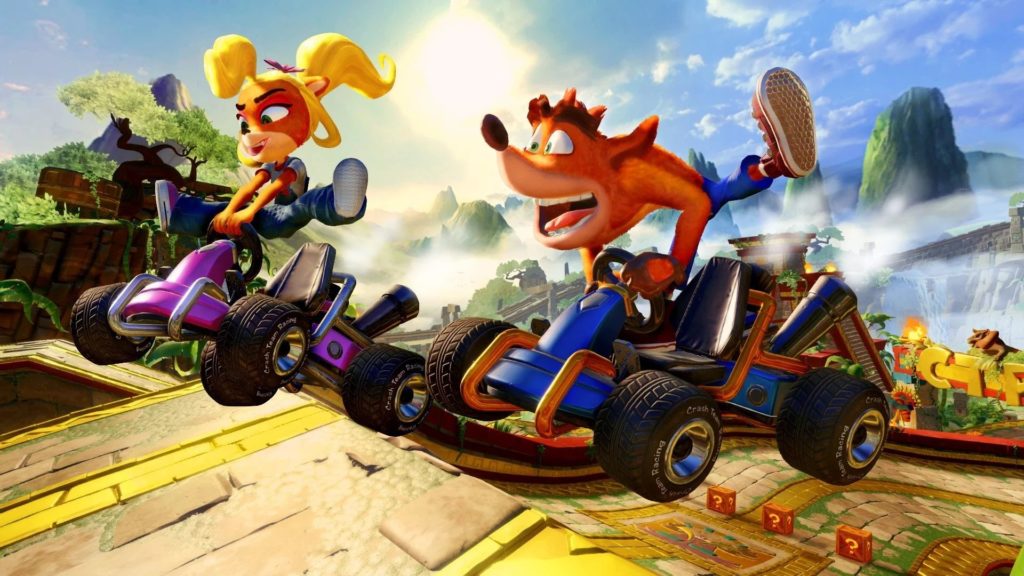 Playing each of the modes awards you with coins regardless of your performance and whether or not you are playing online. You can use these coins to purchase items that are available within the Pit Stop, an in-game shop that contains some exclusive and unique skins and characters that are rotated every so often. Being able to gain access to unique goodies outside of meeting some difficult conditions first enables even those that may not be as skilled at the game to unlock extra content. 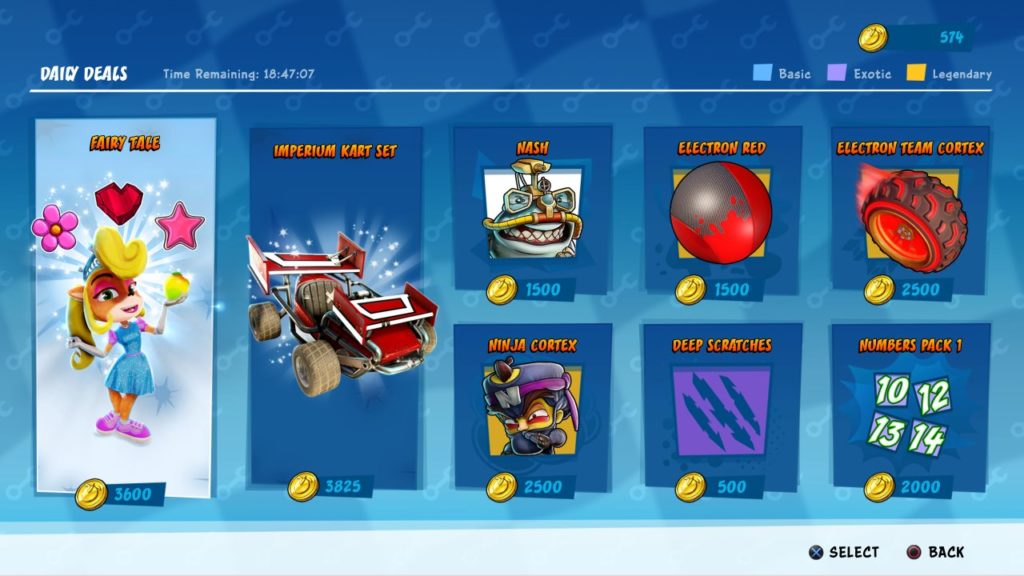 The campaign/story mode has you choosing a character (with the option of switching at almost any time) and entering different worlds to compete against the CPU in order to progress. You will complete a number of races per world before having a one on one race battle with a boss. Defeating the boss allows you to move to the next world. The standard races are quite easy with a tutorial and helpful tips to help you master the game. After winning a race you can always return to the same level to take part in different challenges such as time trials and earning relics/crystals. They add extra strategy elements and use the designs of each level in creative ways to stop them becoming stale and giving you more reasons to come back to them. The boss battles tend to be the same and can be very irritating since they tend to stay ahead of you throughout the race. Your performance matters little as long as you come first but despite the space between you each boss will somehow catapult back and overtake you. There isn’t much importance to the story besides learning the game and unlocking stuff but it is still good for some casual fun. You won’t find yourself being concerned with the narrative as it’s mostly moving from race to race but it isn’t a long campaign I managed to complete it and the challenges in a relatively short period of time, which means anyone can do it. 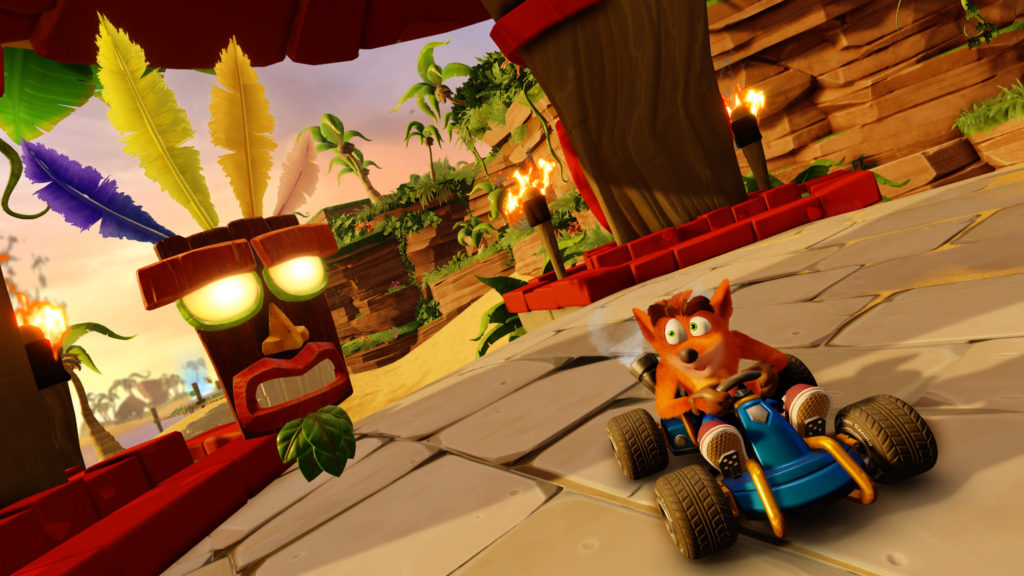 (“Help me Obi Wan Kenobi, your princess is in another castle!”)

Other modes are pretty standard for a racing game, mostly just different variations of racing. Each mode will be experienced in the campaign so it is highly recommended to start there and learn more about the game before playing online. I learned this the hard way by joining an online game right away and not knowing what buttons to press to do anything so I ended up being like that one guy on Call of Duty that randomly throws grenades instead of crouching. It is better to take advantage of the modes on split screen or online because they shine brightest when played with other people. Each track is placed under a category associated with a specific cup/trophy. Performing well earns you points at the end of a race which will ultimately accumulate and form your final score. The player with the most points wins the trophy as well as the bragging rights that accompany the sweet golden cup. 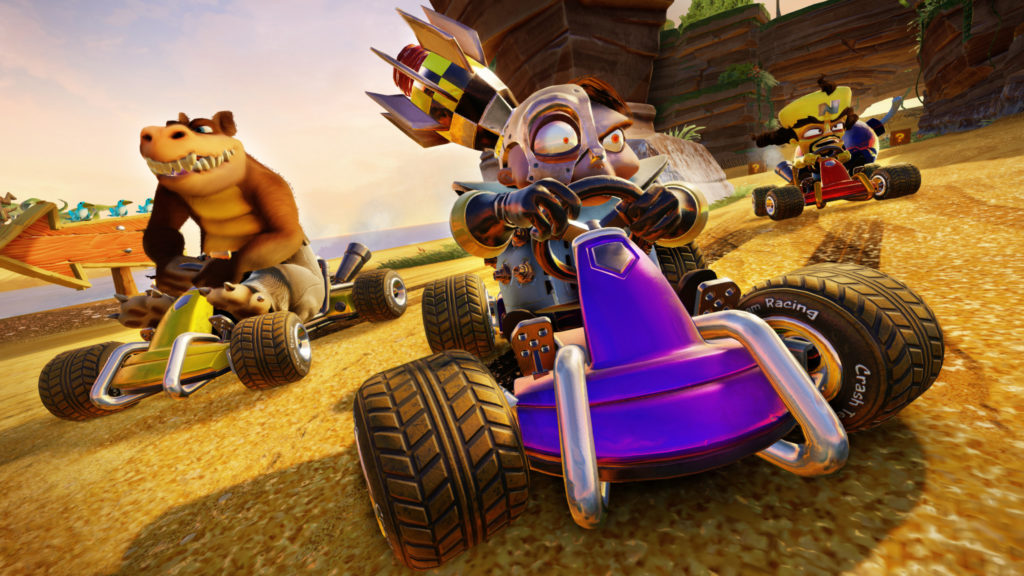 The camera angle could be better as it feels like you can’t see much of what is ahead which is important for being prepared to face any pits, ramps, lasers and other dangers that come your way. This becomes less of a problem as you begin to become familiar with the level designs and it is something I have had trouble with but other people might be happy with the way that it is.

CTR is definitely a rush. It tugs on the heartstrings of those that have fond memories of the original and to see a great game get pimped out with a new paint job makes me smile. It has extra content, outstanding visuals and fast paced gameplay that brings out the road warrior in me. The addition of playing online will surely increase the life expectancy of this game and allow you to share these crazy experiences with others around the world. The controls haven’t really seen as much improvement and some mechanics are not as easy to implement, but it is a very good game to have in your collection, appropriate for both returning fans and new ones, older or younger.