Edna & Harvey: The Breakout - Anniversary Edition is a remaster of the 2008 Daedalic Entertainment PC game of the same title. This latest edition, released earlier this month on Nintendo Switch, PS4 and Xbox One, brings a sharpened new image that makes every crossed-eye or angry eyebrow on its eccentric cast of characters shine brighter than ever before.

Edna & Harvey: The Breakout is a story about a young girl who wakes up to find herself locked inside the padded cell of an asylum without any recollection of how she got there, and her journey to freedom. Which is fitting really, because as I failed to master the controls needed to break Edna and her stuffed rabbit Harvey away from the clutches of Dr. Marcel’s sanatorium during this point and click adventure, I thought I was going a bit mad too. 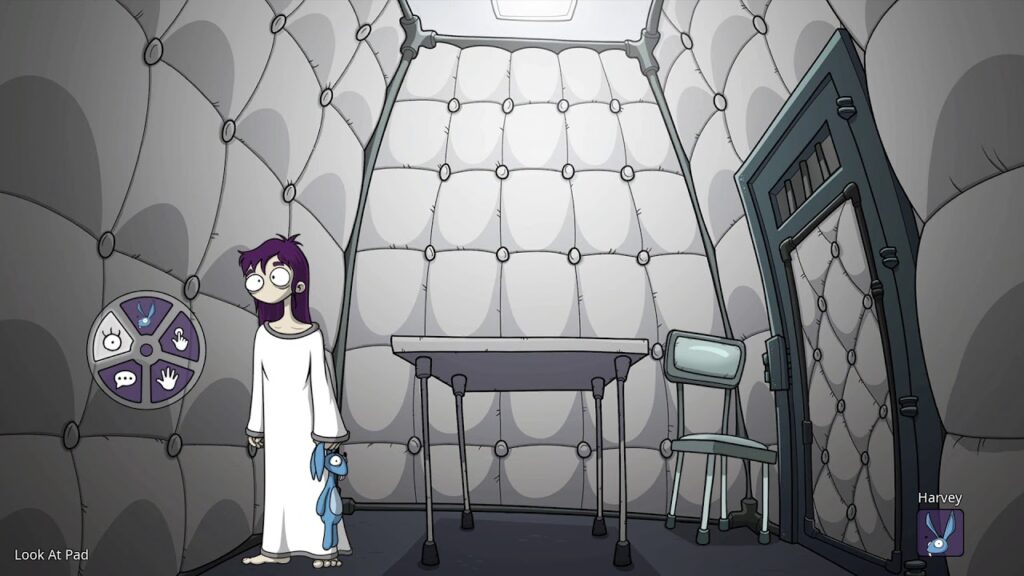 In its marketing, Edna & Harvey: The Breakout is described as a “cult classic” and judging by the number of followers expressing their love for the game underneath its official trailer (and the fact that it warranted an anniversary edition in the first place), my frustration with Edna and Harvey’s adventure is most likely a classic case of “it’s not you, it’s me”. Try as I might, I just did not gel with this game, and I desperately wanted to. The art style is wonderful, the bold, comic book, high resolution visuals have undergone a makeover from the original and manages to be both fun and creepy at the same time. It reminds me of an old haunted house point and click game I used to play on my first PC back in the ‘90s. I use the term ‘play’ lightly as it would freak me out too much and only years later did I realise it was in fact a replica of a children’s pop-up book and not that scary at all. Maybe I’m just not cut out for point and click? 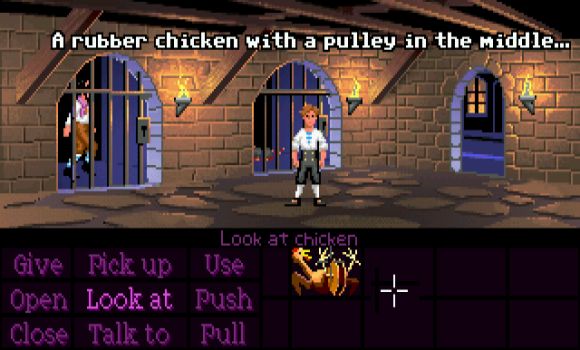 The developers have cleverly chosen to give players the option to switch between new and original art styles, the latter of which is just as charming and I’m sure will appeal to older fans coming to the Anniversary Edition to get their fill of nostalgia (Even if Edna’s wide eyes and dark hair did at times remind me of that awful Momo hoax that went around the internet last year – which, by the way, don’t Google).

The gameplay is straightforward, you move through different environments and use the objects within them to progress to the next, unlocking doors, windows and sometimes clobbering people standing in your way as you go. 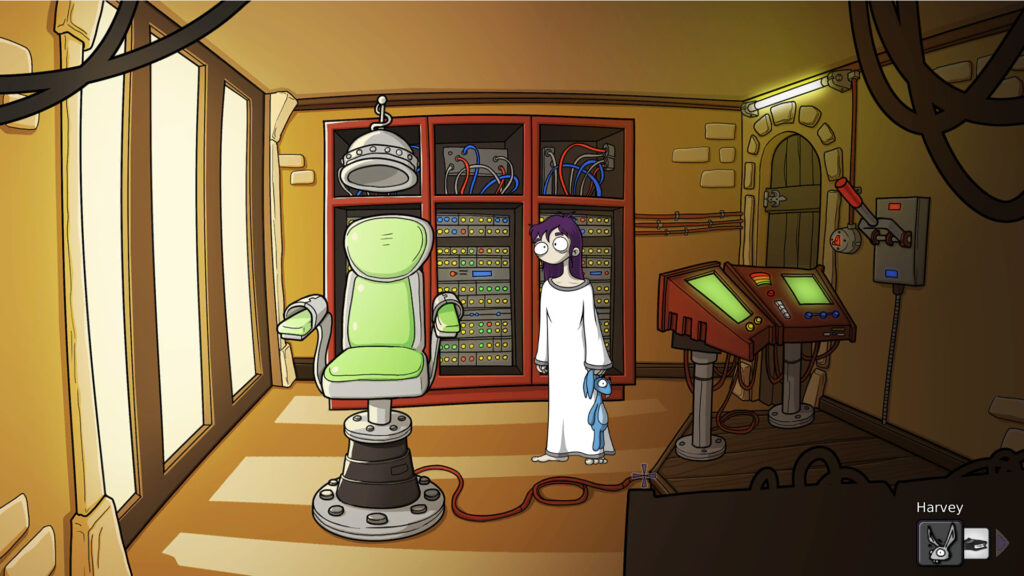 (“Maybe if I sit in this electric chair it will help me progress.”)

For certain tasks you must switch between Edna and Harvey to learn from your environment or enact particular commands. Harvey might be a stuffed animal but he’s Edna’s best friend and pretty useful to have around to encourage or tame some of her less-than- wise ideas. There are a number of ways to interact with your surroundings via your control panel and each one will give you a different line of humorous dialogue as Edna sarcastically tells you why putting your hand in the way of a moving fan blade isn’t a good idea or why she detests marmalade. Moving around those areas can feel pretty slow at times and it could have perhaps benefited from an option to speed past certain animations, but the load times between sections were extremely minimal. 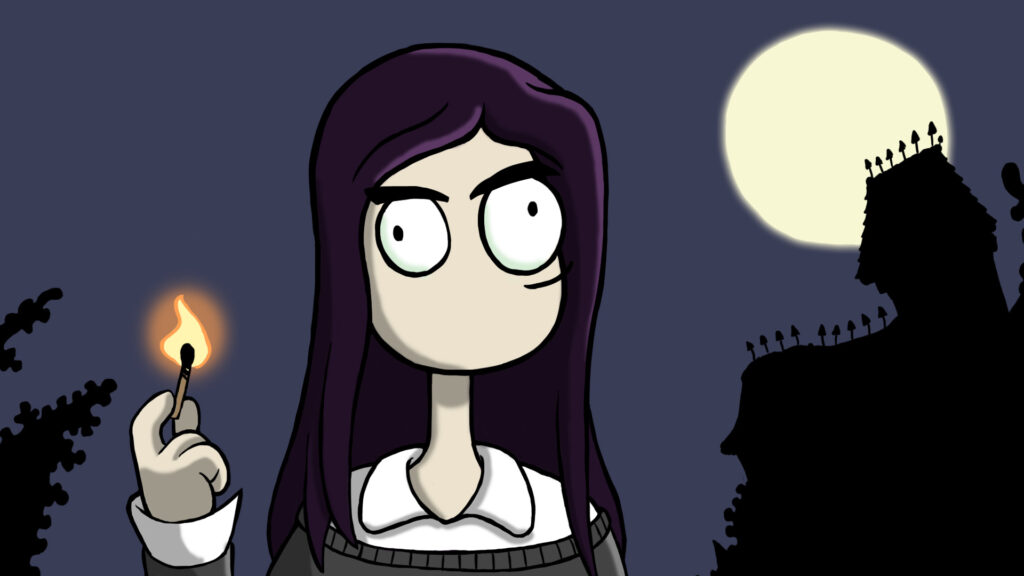 (“Another marmalade factory taken care of….”)

While I absolutely appreciate that Edna & Harvey: The Breakout doesn’t hold your hand, it didn’t feel like there was anything really intuitive about the way you get from A to B. For the many options you’re given, you’ll need to go through a lot of uneducated guesses until you get it right. I enjoyed rummaging around for some clues, like those hidden inside newspaper articles or others where you had to travel to Edna’s past to remember something useful, but others were incredibly frustrating and not in the fun “I’ll sleep on it and try this again tomorrow” way. Perhaps hard-core point and click fans might relish the heightened sense of challenge but for me, it felt like a lot of trial and error rather than giving your brain a real workout. This was particularly noticeable during conversations with other characters where there was no discernible pattern to the dialogue options that might lead you to your desired response. Instead you just have to work your way through all of the above and hope for the best. 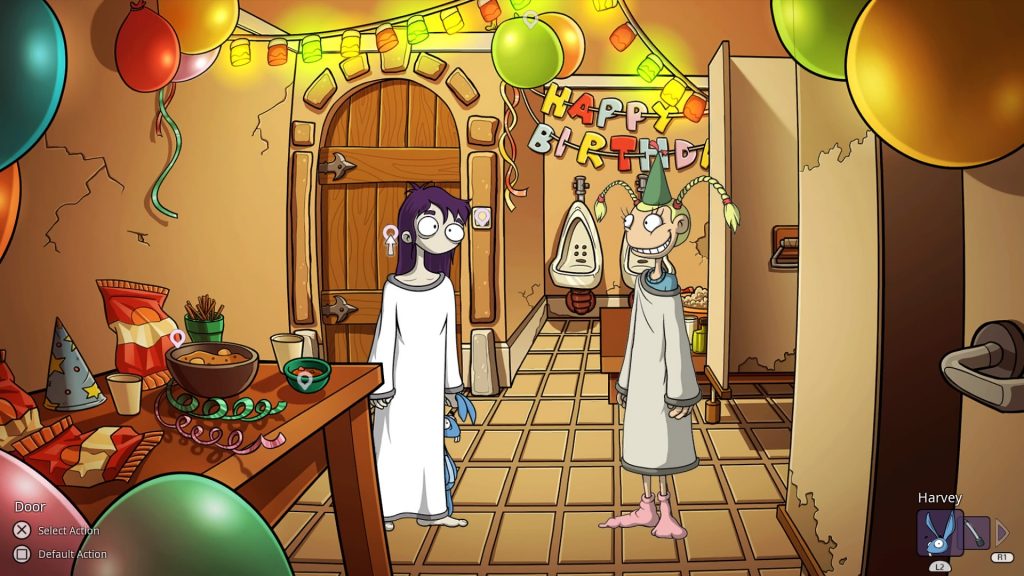 (“How does this help me with that locked door puzzle again?”)

The resulting dialogue is however very funny and utterly mad, and that tone is where Edna & Harvey: The Breakout really succeeds. The eerie music paired with great voice acting to deliver fun, comedic exchanges between characters was wholly enjoyable and I would encourage you to try out the multiple ways of interacting with objects to experience the whole lot. 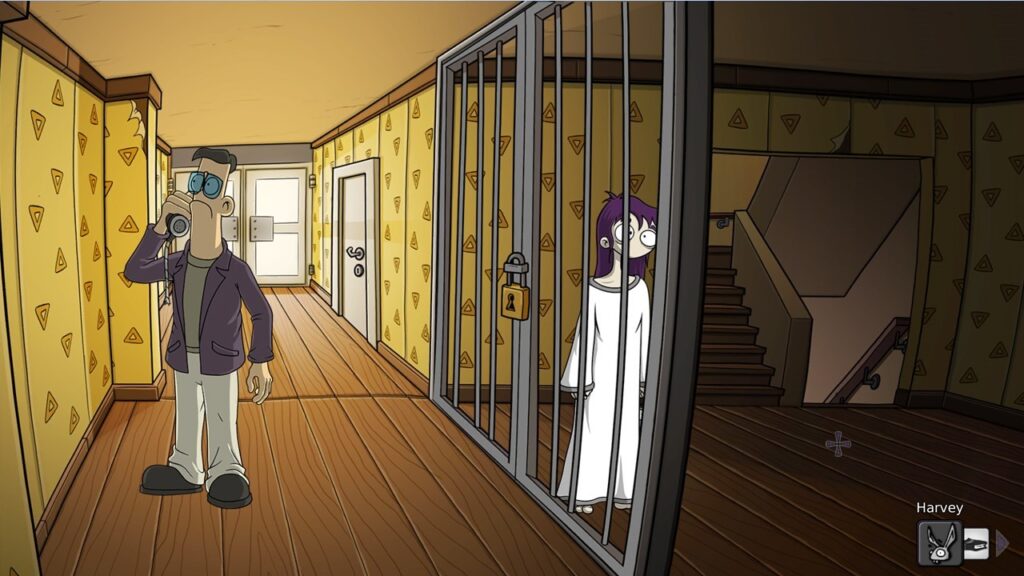 Playing on Switch, I think the game would have really benefited from touch controls. At times, you’re required to react to a situation in a timely manner but using the analogue sticks to highlight the correct item felt a little clunky. Had I been able to touch the correct item or if I were playing on PC with a mouse, I’m sure I would have found the experience much smoother. 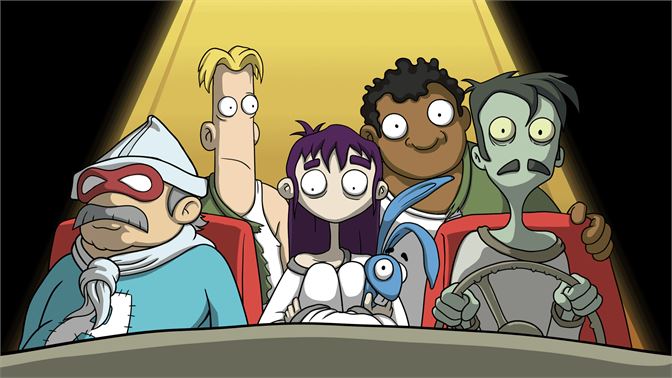 Despite my frustrations (again, it’s not you, it’s definitely me), I did really appreciate getting to spend time with a game that looks great, made me laugh out loud, and embraced it’s crazy little universe. For fans of the original, it’s a must play for its brilliant revamped visuals and weirdness, and I’m sure avid point and click players will be charmed by its story, environments and challenge. And probably won’t be driven mad like I was.