The Legend of Zelda: Breath of The Wild

The latest instalment in the seminal Legend of Zelda series, Breath of the Wild, is a brave new world, both in game design and as a flagship title for the newly released Nintendo Switch. Will this review differ in any way from the almost perfect scores given by every video game reviewing organisation in the world? Probably not.

The Zelda games have been around for over a quarter of a century, with the series celebrating its 31st year as of the time of writing. From the days of the original Nintendo, and for every console since, the Legend of Zelda series has been regarded as some of the best examples of video games ever made, and that’s a tough reputation to live up to. Innovation is always a major focus for Nintendo, having popularised the joy stick, rumble controllers and more recently motion sensor technology to bring new ideas to the video game industry. The Zelda games are no exception as Nintendo has experimented with elements of the series several times; through the introduction of “Groundhog Day” style time travel, alternate worlds with low hanging moons and cell shaded ocean sailing, each game has made an effort to bring something new to the table, and each has been amazing.

(You eye-balling me boy?)

This instalment in the story/legend begins with Link waking up after 100 years of sleep to a devastated Hyrule. Without going into too much plot detail, on the cover BOTW does seem to repeat the old formula of the hero Link questing to defeat villain Ganon to save the princess Zelda. Assaulting castles to save damsels in distress is a worn out trope but it’s been Nintendo’s thing since Mario first ran out on a good plumbing job for a high-risk royal rescue.

With that in mind, Breath of the Wild is easily the biggest and best shake up to the series to date. Not since first playing Ocarina of Time on the N64 has a Zelda game blown me away as much as Breath of the Wild has. There’s a pun in there but you do the work. When the first truly 3D Zelda game was released, Ocarina of Time, gamers were awestruck by the sandbox world and the freedom of movement within it. This was one of the first console games to have a large, open world environment, a concept that is now commonplace in a huge number of games. Breath of the Wild has taken this idea to the extreme. With the newest version of Hyrule, the (always in need of saving) setting of the Zelda games, Nintendo has completely committed to the open world concept like never before.

This sprawling land consists of icy mountain ranges, harsh deserts, lush forests, a massive active volcano visible anywhere in the map and everything else in between. Dotted across the landscape are towers that serve to unlock the game map, but in my play through I found these become of more use for getting a lay of the land, allowing you to spot otherwise unseen locations or shrines, a type of mini dungeon that have replaced the more traditional sort from previous games. The map contains 120 shrines and each consists of a variety of puzzles and mini-bosses set in a self-contained environment, providing a balance with the rest of the games’ focus on open world exploration. 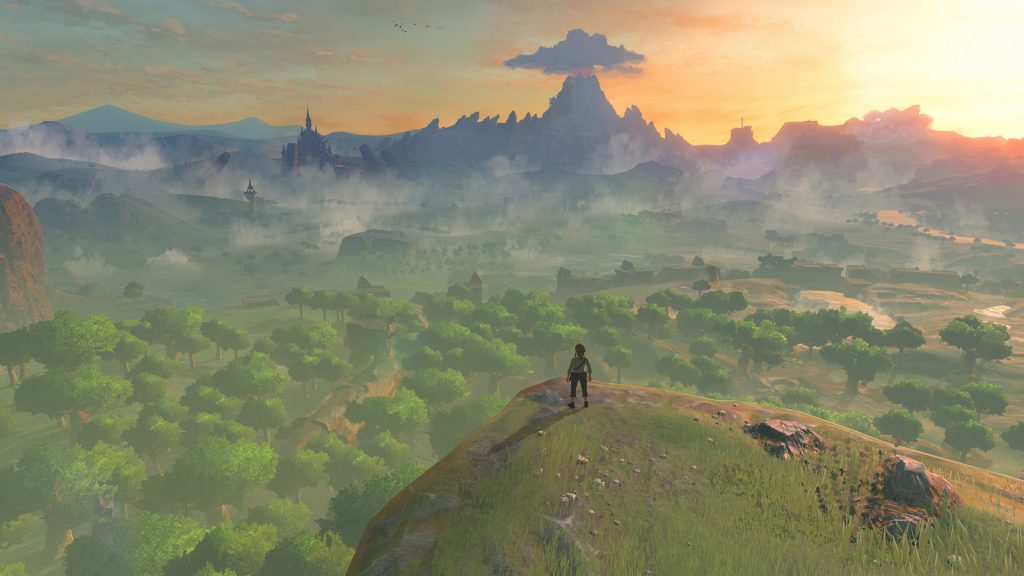 (Gonna explore the shit out of this place!)

With players being given the freedom to explore the entire map from the start, the rest of the game is surprisingly sparse with instruction. The exception to this being the broad objective of defeating the Calamity Ganon, who awaits the players’ final challenge in the ominous Hyrule Castle, an imposing ruined location in the centre of the game. The huge castle serves as the final quasi-dungeon level and is another location viewable from almost anywhere in the map, providing a constant, looming threat and enticing gamers to their doom (if you’re like me, after several attempts to storm the main gate). 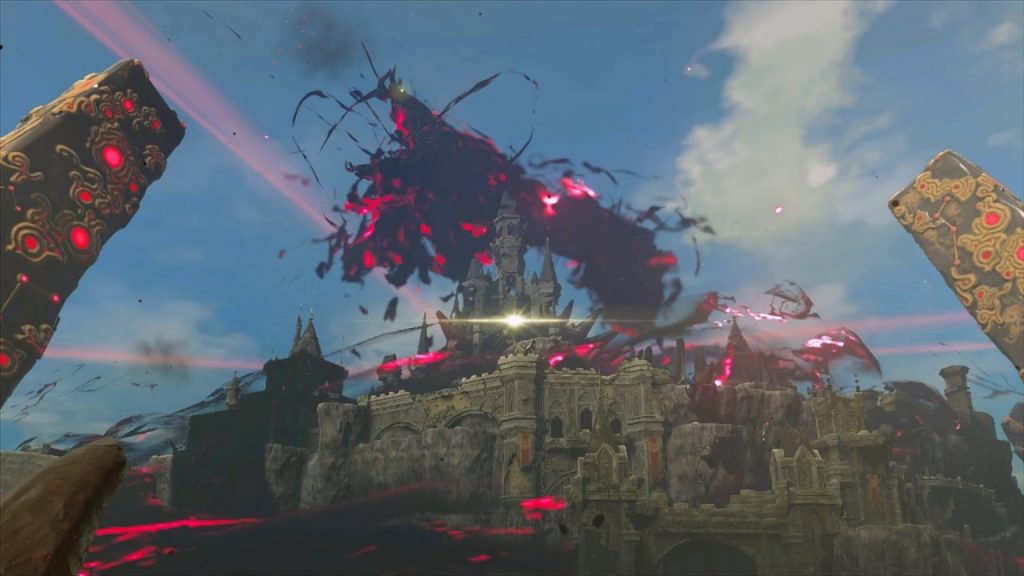 (I could probably take him on now!)

BOTW really begins when you are set loose to explore the open world but the game does ease the player in with an excellently conceived training area, modeled as a miniature version of the entire game world, where the basics of the game-play mechanics are laid out for the player. This is no easy thing, to introduce most of the games’ combat, crafting and exploration options as Link has access to pretty much all of his major powers and abilities from the start, another major difference from previous games where advancement through the story was based on the classic formula of dungeon diving for specific items that would allow you to progress.

Some of these abilities include Magneto style “magnesis” (allowing the player to lift and move metal objects), infinite bombs and a “Bernard’s Watch” kind of time freezing power, (which in the beginning only works on inanimate objects but can be powered up to freeze enemies in mid-air). All of these game mechanics are necessary to succeed in the shrines puzzles but can also be used to extensively experiment with the main game itself, or just to have some good ol’ fashioned fun blowing stuff up. 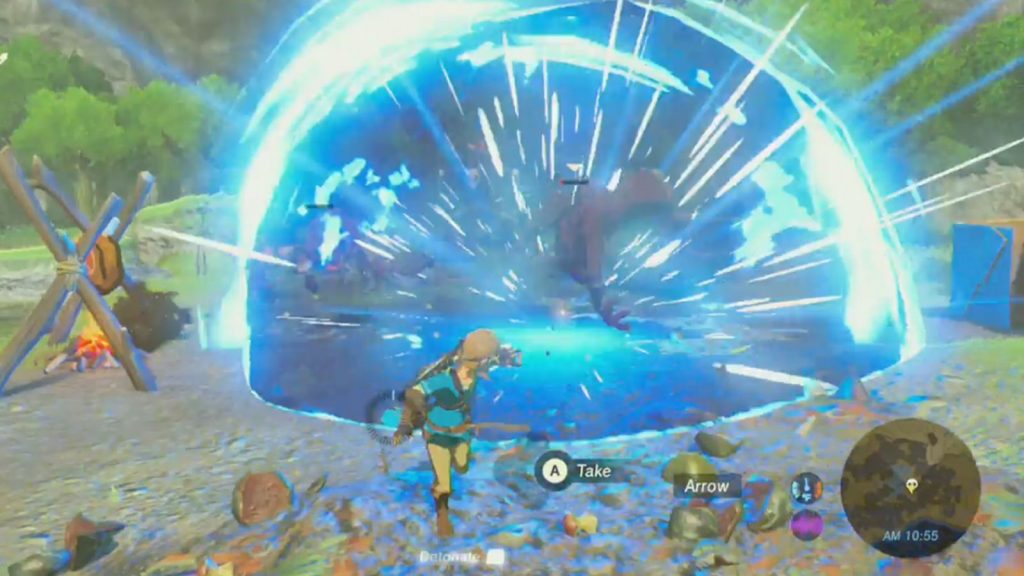 (Hehe, he wont be going home to his family)

Easily taking 100+ hours of gameplay to truly explore, the incredibly detailed, vibrant game world can be traversed freely in a variety of ways, whether that be crossing the wide open fields on horseback, shield-surfing your way down from a snowy peak or paragliding over enemies below. The size of the map alone is impressive enough, being comparable to any recent RPG classic like Skyrim or The Witcher series, but the range of movement options and verticality introduced in Breath of the Wild feels most revolutionary. While previous games in the series had no need for a jump button, BOTW allows the player to move in any direction with a climbing mechanic that opens up a whole new (vertical) layer to the game. If a player encounters some sort of blockage in their path, going up and over is now an option, as long as you have enough stamina and can make it to the top. 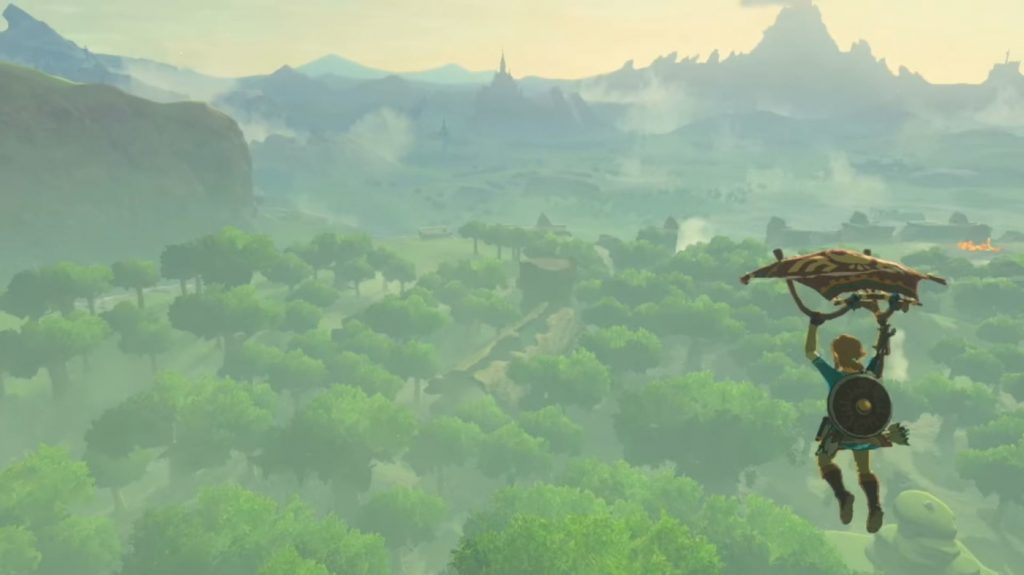 (Beats the shit out of walking!)

This also rewards the curiosity of players and encourages exploration, as many treasure chests or shrines are elaborately hidden in seemingly unreachable places. The game differs from predecessors again with the effect of the environment on the player, with colder areas slowly freezing you and hotter areas (see volcano) roasting Link alive.  The best example of the environment affecting the player would probably be getting struck by lightning in a storm, which happened several times before I realised that if the player is wearing an iron suit of armour and carrying a huge iron hammer in a thunderstorm, they’re going to have a bad time.

This forces the player to consider elements of survival such as preparing with warm clothing or heat elixirs before climbing a frosty mountain. This is also true for surviving combat in the game, with better armour and weapons evening the odds against the tougher foes, as weapons now have a durability factor and need to be replaced once broken. 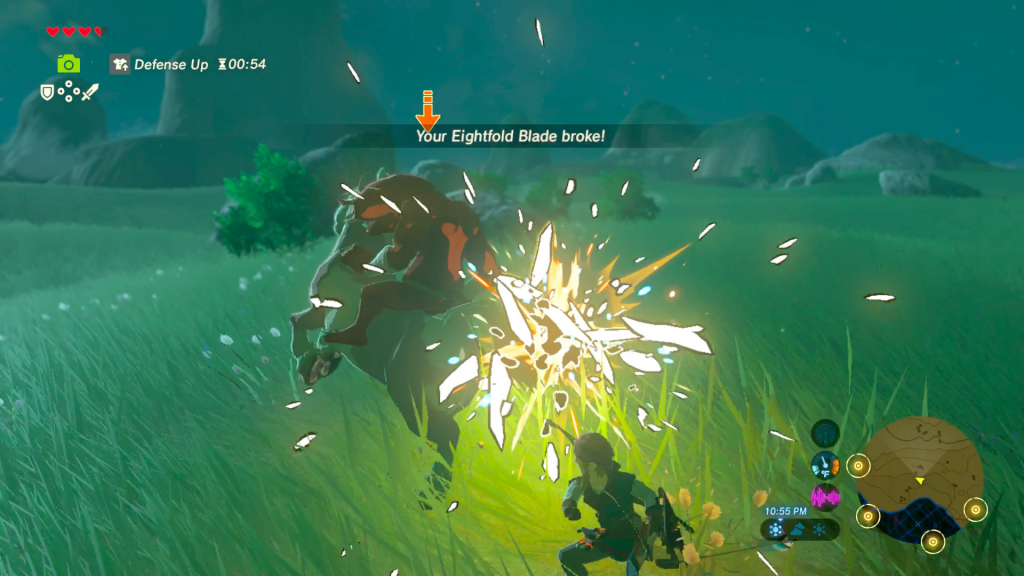 (Oh I understand, I mean it is made of steel, but fuck me right?)

Combat gameplay has also received an update from the typical hack’n’slash variety, allowing the player more options in a fight; jumping headfirst into battle with a huge monster, coming up with out-of-the-box ways to eliminate several enemies at once or heroically sneaking around unseen. The sheer amount of weaponry to be found is impressive also, ranging from the classic sword and shield combo of past games to new additions like axes, spears, bows, wooden sticks; pretty much anything you can pick up and hit a guy with.

While definitely a beautiful looking game, with its gorgeous sun drenched vistas and shaded woods teeming with wildlife, BOTW represents a series pinnacle, having updated and combined the art style of previous games to result in the most realistic, yet almost water coloured world of Hyrule yet. 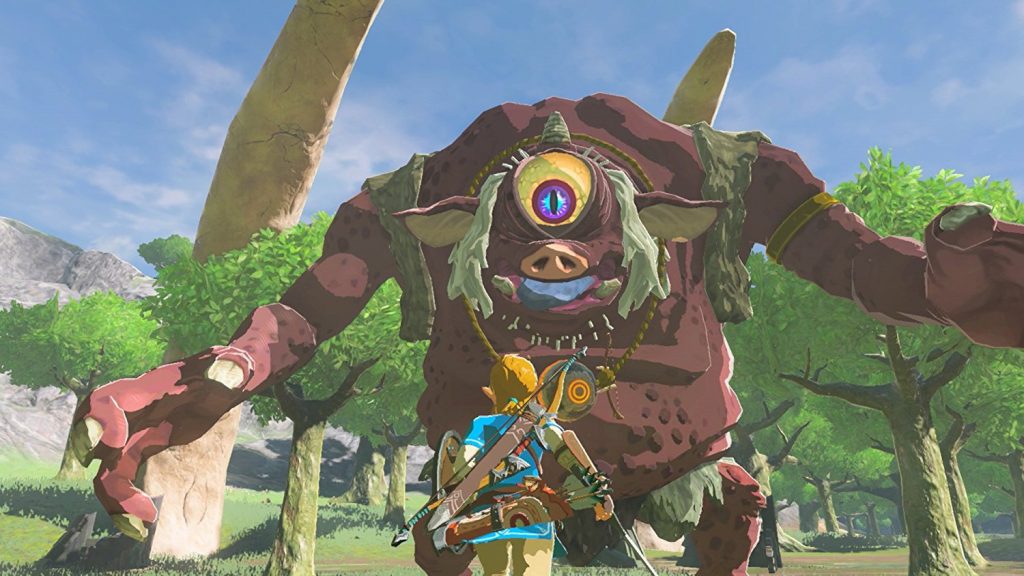 (No joke, just enjoy the pretty!)

Breath of the Wild is an impressive spectacle in today’s gaming culture; it isn’t often a game is released to such acclaim from all corners, but it really does deserve the praise.  The game manages to interpret the core gameplay of the series for the current generation of gamers, taking many of the classic ideas and developing them to make a more immersive and entertaining experience, while staying true to fans of the series and bringing in new ones alike.

Maybe the exceptional level of quality in most Nintendo games can be taken for granted but that makes BOTW all the more excellent for taking the series to new heights.  And with Nintendo recently announcing a production increase in Switch consoles to keep up with sales demands, it can be argued that the company has, in a sense, been rejuvenated with the success of Breath of the Wild, as much as the game itself is a breath of fresh air (just couldn’t resist at least one pun). The Legend of Zelda Breath of the Wild is incredible. Nuff said.

The Legend of Zelda: Breath of the Wild
£55.99 on Nintendo Switch