In a grim world where animals have replaced mankind, what kind of detective will you be? And if you said anything other than the fedora wearing, retired boxing champ, alligator kind, you are wrong!

On the one hand, I am Brok, a strong 35-year-old alligator man haunted by nightmares of loss (this is the main character in this story), a guy who is rather submissive to others at times despite his macho looks but always on the lookout to help others. I, on the other hand, am a 36-year-old rotund man who, first chance he got, beat who I thought was Brok’s roommate up to the point he went to his room and put a “no gators allowed” sign on the door. I eventually found out that this character was Brok’s adopted son, so I know this choice will most likely come back to bite me in later chapters. This is the level of freedom you’re given in BROK the InvestiGator (get it?) and one that I didn’t expect going into COWCAT’s short but sweet point and click prologue. When we begin, Brok is having a nightmare, trapped inside a burning building with no way out with naught but his fists for company. After several short tutorial messages you’re free to interact with the environment, pointing and clicking your way to freedom using the 2 control systems. First up is the adventure mode that folks regular to point and click adventures will be used to. You examine interesting things in the maps and figure your way through, be it puzzles or combining objects to open doors and passages, standard fare for the genre. The other system, which is new to me, is the action mode whereby the game turns into a sort of side-scrolling beat ‘em up but not just for combat but also solving puzzles, brain or brawn is key here. 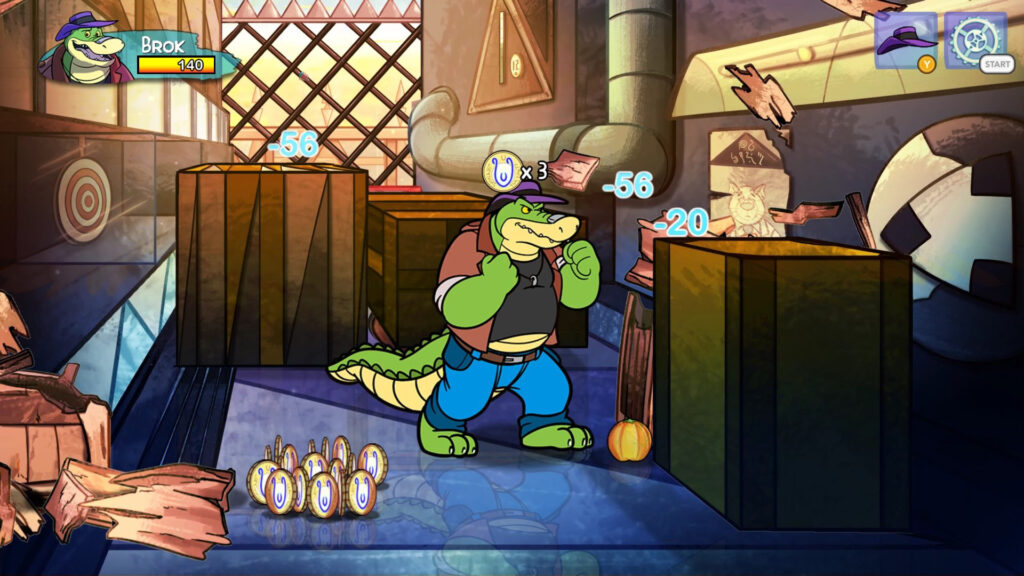 Sure, you could spend your hard-earned cash to buy some items from the machines, or engage in conversation and solve your problems like an adult, but having the option to just beat shit up is highly refreshing. Also to note, littered around each scene are 3 hidden QR codes that are called ad tokens, along with being a collectable, allow you to buy hints if you get stuck which is nice. You have to put in some effort to be able to use hints this way and is a wholly better way than just getting them for free. And whilst on the subject of collections, though I’m not sure you could class them as a “collectable” per se, any deaths that happen to you are also saved on an unlockable screen, perhaps as a trophy but more than likely a warning so you don’t make the same mistake twice. During my run, I kinda swayed somewhere over the middle, I’d try to talk out problems but if that failed my fists were there, robots, doors, traps, they all met my fists. It is good to talk though. Not just for sake of the story but to hear the amazing voice acting that has gone into the game to make the arrangement of animalistic people you meet well worth your ear. Everything from Brok and his friends to random robots are all fully voice acted and hit all their marks really well. When looking at Brok himself you’d think he’s surly and harsh which does happen from time to time but when the need arises he more than eloquently conveys sadness, calmness and excitement. I’m unsure if the voice actors spent time in the booths together but their conversations play off each other well. Besides the acting, the world itself is a pleasure to roam around in with its 80s/90s cartoon styling, you start off in the slums, a place where machines don’t work, bills are high and gangs are rampant. The first character in the world you meet is an old guy with an illness who’s getting bullied by the local Squealers. After a brief chinwag, it’s fisticuffs time and the bullies are dispatched and the guy, who has resigned himself to death agrees to let Brok help him. Paths may differ here as actions have consequences, you could choose not to help, you could beat the guy up, you could just back out of the convo and move on through the slums and continue the main mission for a cat man named Sin. The slums, whilst grubby and dusty, feel alive despite the lack of life bar a few NPCs, you can take an elevator up to a crane minigame. Essentially, you drop 10 units, the main currency, per turn to drop the crane in a location in the hops of scoring loot. Each drop will give you a counter of the distance to the main treasure but it is very costly early on and you only get 6 tries before the area resets, if you don’t get the treasure by then you risk losing the cash you’ve sunk in thus far. After meeting Sin, you’re off to the big city but get the option to stop off at your best friend, Shay, at her garage where a little quick time event plays out. The government controls the city and Shay can help you get in, she’s a joy to talk to and I enjoyed the conversations with her the best. Bigger mysteries evolve once you get to the city and beyond but alas, this stage is just the prologue and ends with more chapters to come down the line. 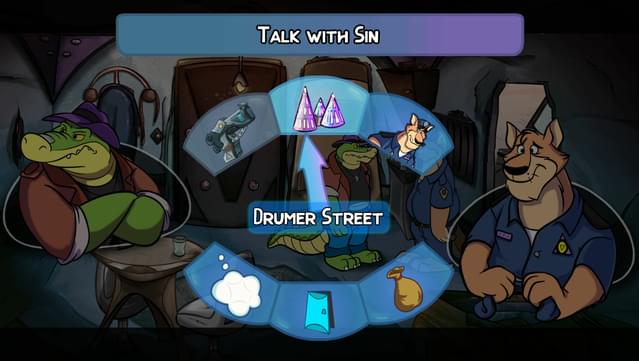 Normally it would be hard to put a price on something you could get through between 2-4 hours but the prologue is free to download and play at your leisure and if you’re a fan of arcade beat ‘em ups, point and click adventures, rich story, great visuals and voice acting then you should 100% check it out, you’ve got nothing to lose but an excellent few hours of serious but comedic at times adventure, I’m definitely looking forward to seeing what else happens to Brok and his friends down the line.