Not long after the greatest war mankind has ever know, came the second greatest war mankind has ever know, or as you history buffs call it; “the one with Hitler”. I have commanded a crew on a spaceship…in space, and managed a nomadic tribe as a deity, and now my superior officers need my lack of skills to lead a team of militia to fight back against the Nazi incursion. Semper fi, oorah and cowabunga dudes.

Fighting on the eastern front, or more specifically Russia, is a group of resistance fighters that are clad in the typical brown overcoats you would expect from the stereotypical freedom fighters. From within Russia’s version of Sherwood Forest, we plan our raids against Nazi bases, and generally try to piss off the big man with the toothbrush moustache as much as possible. We are the brave souls that leave a burning turd outside his door and ring the doorbell, to run away and plan the next big prank.

Partisans 1941 is a real-time strategy game at heart, and the core mechanics are very similar to some other games of this genre. It begins with an introduction with very beautifully detailed images of destruction and some written text, given some insight into the skirmished between German and Soviet forces, before taking thousands of Russian soldiers into a prison camp. It’s from here that we are given the name of our first partisan, Captain Zorin, and he will soon make his attempt to escape. (They’re good at hide and seek, haven’t seen them for an hour!)

The first mission acts as a tutorial, as most do, but it also provides some context in what is happening. The loading screen presents an image of the location, name of the mission at hand, and the typical loading screen messages giving hints like “if you stab someone then they have been stabbed”. The camera is a top down view, providing for me some scope of the surroundings, and it moves across until it finds the unlucky group that are being lined up. Staying authentic to the times, the Nazi soldiers speak in German, and the Russians in Klingon that also sounds like Russian. There are text lines that show up to help interpret what is being said, so it’s just like watching anime that isn’t dubbed. I thought this was a nice touch, expecting everything just to be read, but I like to hear characters speaking, even if I still do need to read something. Thanks to Zorin’s defiance he is then lead away to be executed, which then gives him the chance he needs to escape. 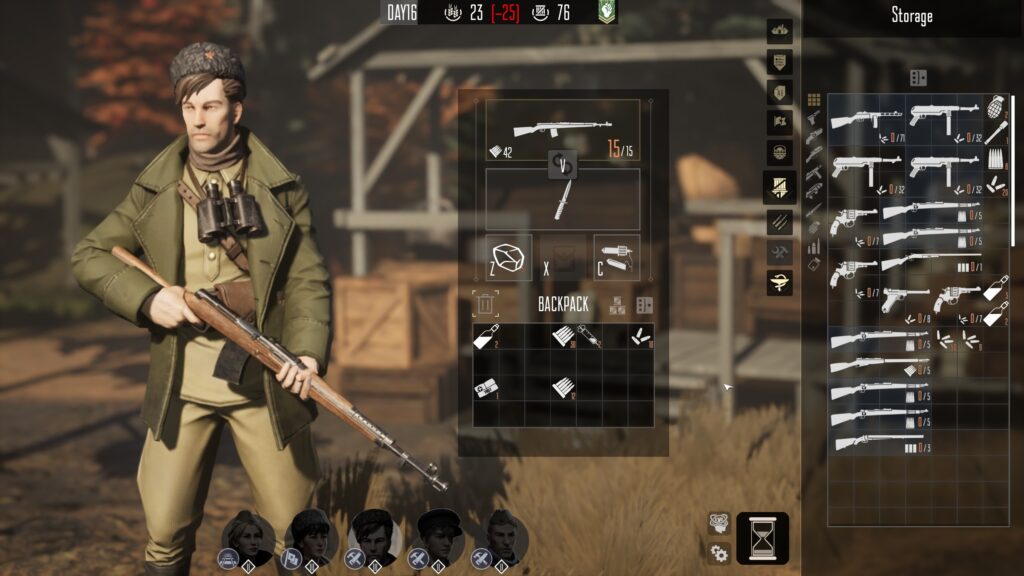 From here I take control and using Zorin’s inner monologue (and the objectives in the top left-hand side of the screen) I am given some guidance and must use the mouse to click on where I want him to move to. The controls were simple enough to grasp, and like any sort of escape scenario I tend to shit myself a little with the fear of getting caught. This is what sets the tone for me for the rest of my preview play time, and I think I quite liked it. What it emphasized is that stealth is the most important factor for success, including spatial awareness, patience and timing.

I clicked timidly as I watched the Captain dander along the track, stopping to avoid the cones of light and watchful eyes of the sentries, almost on the wrong spot and shouting at the Captain as I tried to click back. It was a surprisingly safe environment to learn the controls, and I’m the type to just press buttons to see what they do, but it was easy to remember what to press to bring up the inventory and menus, and because the actions carried out only require a click then it makes it easier to keep an eye out for enemy behaviors whilst my player moves around the camp. (“Dammit Nikolai, I said we needed to get stones, not stoned!”)

I picked up a wee knife and almost as soon as I had it, I got the chance to slit a few throats, and even got to throw the knife, having to pick it back up from a corpse. The stealth part is autonomous, and the character will immediately crouch or sink when an enemy is close by, so that’s something else off my responsibility list, and bodies can be hidden in the environment, just like my character can hide in bushes, small bunkers and inside buildings. Bushes do make some noise, so moving through when an enemy is close is ill advised as I quickly learned after making some suspicious before the tutorial message popped up to warn me. The Cap was fine, but my heart rate wasn’t doing too good. The escape level was short and sweet, and I didn’t have much trouble, even earning a level up so it’s nice to be rewarded for stabbing bad guys, if only it was true in real life. The second mission carries on from the ending of the previous one, but I won’t spoil anything else. The biggest selling point is the gameplay, which is squad-based mostly, and it relies on me positioning my team appropriately to move around enemies, take some out and set up ambushes. Each member can be controlled individually, or as a group when selected to together, and directed to different areas of the map. The maps themselves are nothing spectacular in terms of design, but they are very well detailed and have that drab and dull look like we all assume the 1940s was just browns and greens. The camera is angled well enough for me to get a look at the surroundings but can be zoomed in for closer inspection of my controlled character. 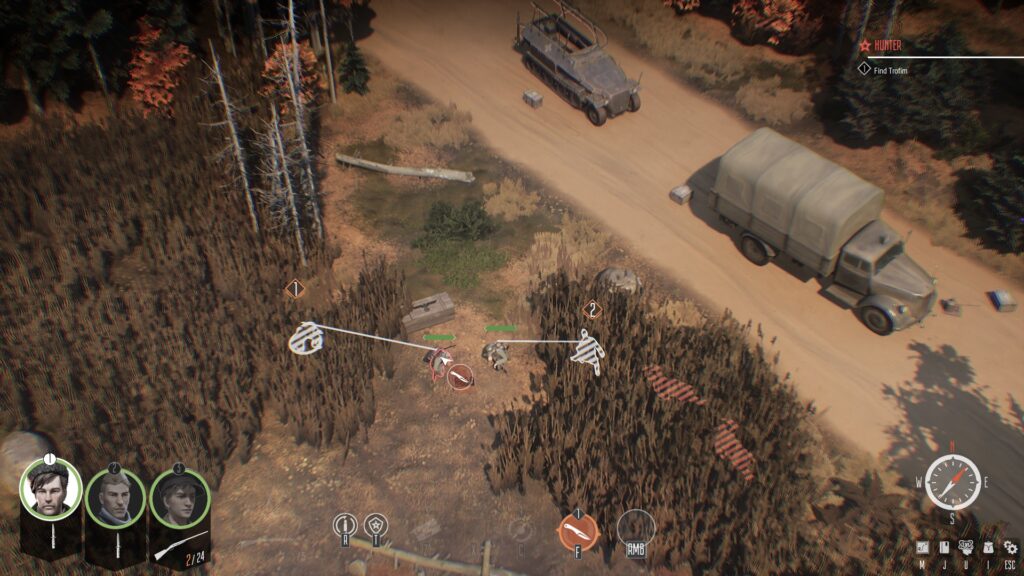 It would have been a benefit if the camera followed my controlled character or would give me some visual confirmation of where each of my crew were sitting when zoomed out (I think there are icons, but I never really noticed). It would take up less of my time looking for them, but other than that it functions quite well. With a weapon equipped I just need to highlight an enemy to view an icon which indicates what my controlled character will do when I click and let them get to work. Combat is simplistic, but skirmishes and direct shootouts are best avoided. This isn’t an FPS, so there is none of the 360 no-scoping bollocks, no running around, no sliding along the ground when shooting and no spray ‘n’ pray tactics that young American kids are fond of. When the gunshots go off, all playable characters and NPCs tend to stand or crouch in position and shoot until every person on the other team is dead. 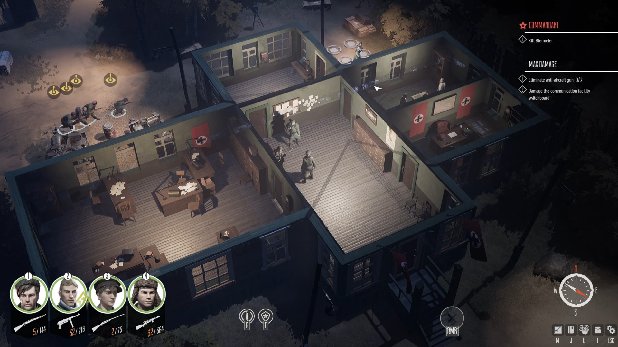 (Remember, their sight is based on movement…)

Thankfully there is a tactical mode, which slows down time to allow quick planning and preparation, and it can be used as much as you want. I found it integral in trying to orchestrate the best possible outcome, as it would let me direct my team and then watch as they move like a Special Forces group. Unfortunately, it has also had its drawbacks. Not planning things properly will then have you watch your failure unfurl slowly and there is little to be done to stop it. I had a lot of failures, I’m not afraid to admit. I moved the pieces around like a chessboard, but even some of the best strategies can fail miserably. I was still surprised by how good the animations were, and when managing the inventory of each character I get a closer look, and the graphics are quite good. It’s still an indie game, so graphics and environmental detail aren’t expected to be great, but I liked them anyway. The colours were very dull, but they fit the setting very well. I mean, there isn’t much need to have a large variety of colours when you’re sneaking around military camps in forests, and we know from movies that the 1940s didn’t have very many colours, even the rainbows had fewer than seven back then. 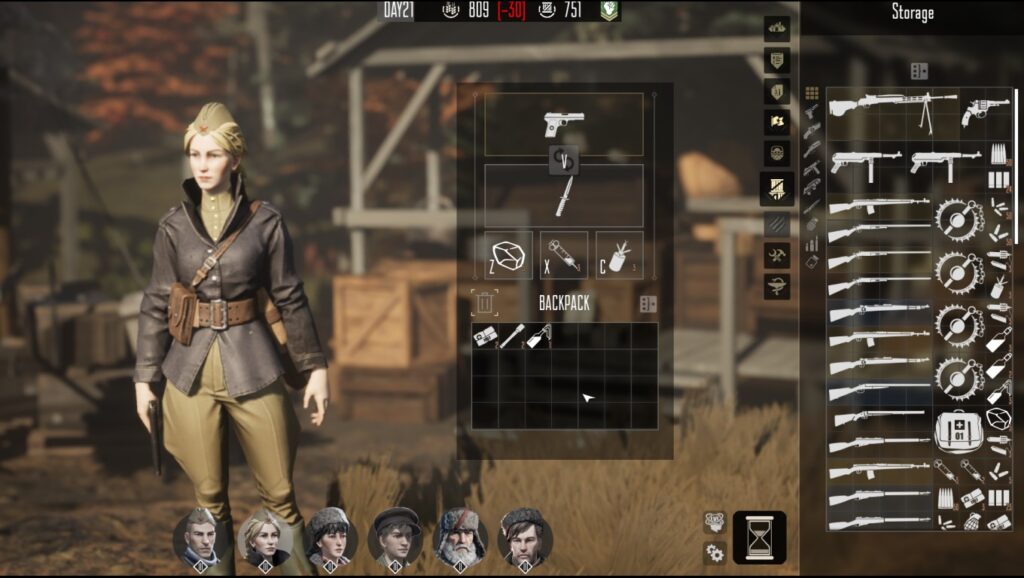 In the interest of not dragging this short experience out too much, I would say that this game is well recommended. The gameplay is tense and very fun, with plenty of freedom to put your own plans into action, and who doesn’t love killing Nazi soldiers? It’s an underdog story, and you start to bond with your characters because you see them in action, they have reasons enough to fight back, and you hold the key to success. The time it takes to finish a mission is determined by how well you plan your route and how well you navigate your team, to learn the environment and enemy patterns, and to only kill when needed. It would have been great if the camera did follow the character I was in control of, and it was easier to find my team from wherever they are sitting, but it never got in the way too much. And while the controls are simplistic, there is a great deal of information to be aware, but rather than being a hindrance it actually adds to the immersion. Shootouts aren’t as fulfilling as I hoped, and it would be a plus if my comrades would kill the closest enemy upon being spotted, rather than me needing to click and command to make it happen. I think it still would have been better to have the option to move the highlighted character with the keyboard in some circumstances. I’ll admit it’s useful when you move people around and then switch over to someone else, but when you rely on a key character and spend more time with that person it’s nice to have additional control. (“Where the hell is everybody?”)

It may seem strange to mention this as a downside, but no matter how many times you fail, you can just carry on where you left off and do it again, as many times as you’d like. It removes some of that fear of failure because there is a safety net covered in cushions. There should have been a system in place that gives you consequences to your actions, like a perma-death mode, or perhaps limited attempts before having to start from the beginning of a mission with reduced resources, just to make you more careful. I hope to see additional maps and areas, perhaps move the same formula over into other fronts, like battles in the Pacific, or through France, just to freshen things up. Altogether, it’s good craic and worth the purchase.