A much anticipated second coming, following the massive success of the first game, I delved into the first couple of levels of a war-torn Japan and found my inner Samurai-demon-hunter-guy. I will regale you all with my tales of hardship, pain and utter joy.

Before we begin I need to confess something; I never actually played the first game, at all. I am a fresh-faced noob to this series so my experiences here are very new. However, I think that it works in my favour because I can then learn all the controls from scratch and get a fresh perspective of the gameplay without being swayed from any influence from the first game. The first thing I got to do, which is also the mechanic I spend most time on, was creating my character. To my knowledge, the first game required you to play as a named hero, with a set appearance, but in this version, I made a scarred badass with an intense stare and a deep manly voice. He had some facial hair too, just because.

(If you can’t grow a beard you must wear a mask to hide your shame!)

Once my digital avatar of destruction was created I got to select two starting weapons that also acted as boosts to my stats. The stats are traditional and well known by now, as with most RPG games. I had a decent selection of weaponry to choose from but did not find it difficult to pick the two closest to me, and my soul. I selected the katana, and iconic weapon everyone knows to associate with Japan’s historical warrior caste, raising my constitution by one point. My second weapon was an even bigger katana, you know in case the standard katana just can’t “cut it”. This added a +1 to my strength, a stat I tend to put ahead of others for that sweet damage increase. I jumped right into the action without taking heed to the plot, but in fairness not much was shared with me, so I don’t think I missed anything. I know Nioh had a strong story (or so I have read) and a few expansions to the story in the form of DLC, but Nioh 2 began very quickly and before long I was standing in a forest armed to the teeth and unsure of what I was supposed to do. The tutorial was minimal, just giving me a display of the basic controls the further along I went, with the occasional bit of text to explain certain mechanics. A veteran would have been given a refresher course but to me it was important to read every detail. I was eager to begin fighting enemies and made the rookie mistake of charging at some soldiers upon spotting them having a quiet discussion. I was quickly taught humility by two grunts that should have been easy to dispatch but nearly made short work of me. I had to back off and rethink my strategy but also read up on the combat system to try and familiarise myself with all the mechanics that were still new to me. I learned that I can attack from different stances, switching between a top, middle and low stance that each represent the level of force applied to the attack. 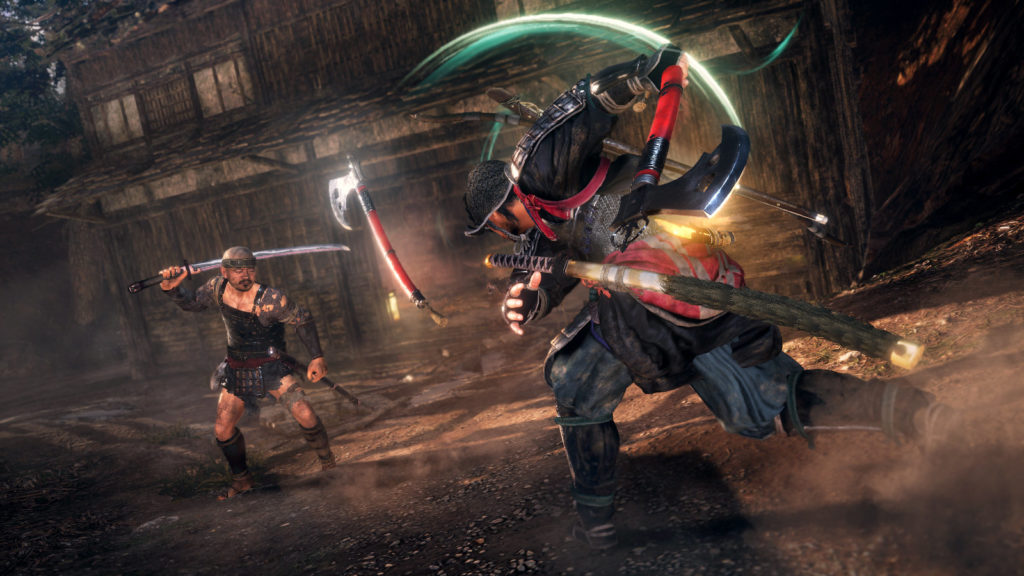 The top stance delivers the most damage but takes away a lot more Ki (which operates as the stamina gauge) and leaves you open to counters when surrounded. The middle stance is a good balance between speed and strength, but the attacks also sweep across and can hit more enemies. The lower stance allows for faster attacking and dodging, which is ideal when faced with a tough opponent. These stances can be switched on the fly, making way for an array of combos to help deal with the many enemy types that seem to just be there waiting for you to come and kill them. (“You are one ugly motherfucker”)

Nioh 2 resembles the Souls series, Sekiro in particularly, largely due to the setting and atmosphere, as well as the intricate combat and overall difficulty. But, it isn’t just some clone, it is still noticeably different. It stands out by what it does differently and is something that I want to involve myself with more. Being new to the series also has its drawbacks, because it does nothing to welcome new players. Anyone picking this up for the first time may feel a little intimidated by the lack of an introduction to the combat and inventory systems, and coming across a Yokai (demon) for the first time, so the beta does look to be geared towards hardcore fans of the first game. (“You’ll get no welcome from this guy!”)

Despite not knowing what this world is about I am still intrigued. I want to know more, I want to go back to the very start and make my way through the same journey others have and then see how I feel about Nioh 2. Luckily, PS4 users are able to download Nioh for free this month with a PS Plus subscription. As many and elder family member of mine would say; “if it’s free, take it”. I will be taking advantage of this gift from Sony by getting myself immersed in this interesting world to learn more about the lore and the role I will be playing. One of my favourite parts was getting a glimpse of the weapon progression system. There are a few weapon types, a maximum of two were at my disposal at the start of the game, but looting one from the corpse of a dismembered foe means I can still switch them out if I changed my mind. I stuck with my normal katana/big katana duo and found that if I used them often enough that they will begin to level up, unlocking perks that grant new abilities and moves. This can be done with all weapons so even if I were to max out the two I began with I could always swap them around to start working on something else that might be useful (looks cool). The character levels up separately, and with enough experience will begin to unlock points to put into your stats. Certain weapons do perform better with the associating stats so it is important to decide what kind of player you want to be, but the beauty of it all is that it isn’t set in stone. I strongly recommend trying out different weapons at the beginning to get an idea of what you like better before investing time and effort in any weapon or play style. Visually speaking, the graphics weren’t great. Looking at the whole picture the setting was great, but when looking more closely to your enemies they suffer from the same issues as the Souls series. They look a little washed out and there are lights emanating from everywhere. What didn’t help was the fact that the world just seems to be really dark, but enemies have some sort of bio-luminescence, and many attacks, items from fallen enemies and more just glow brightly for unexplained reasons. It’s not a big gripe, but I would like a game, that is heavily involved with combat, to be less of a risk of giving someone a photosensitive seizure. In saying that, the created character looks brilliant. When first creating Baron Badass, I noticed the great number of potential options and level of detail in all of the facial features, hair and so on. It’s a pity the camera doesn’t sit closer to the player, because I would like to gaze upon Baron Badass more often, just to appreciate his look of pure badassery. The environments themselves still looked pretty cool, with an ominous feeling all around and the sensation that everything was out to get me. I tread cautiously, able to hear enemies before seeing them. They were everywhere, so it was never long before I would come across a small garrison of soldiers, kill them and move up a hill only to run back down as I’m chased by a screaming demon that strongly resembles a great aunt of mine (which is truly horrifying). There were genuine moments of unease and excitement when walking through the dangerous roads of the first couple of levels. It never felt linear because I could just go my own way and find shortcuts that helped me get back to certain shrines, which act as checkpoints and somewhere to level up. Remembering that I have not played the first game, and only had the beta to play, it would be hard to give this a score that would truly reflect the quality of what I experienced. Overall I had a good time and I am looking forward to playing the first Nioh, to learn it from scratch. I am glad this was an open beta, as it may have opened something else up to me. The combat was difficult to learn, especially by trial and error, the enemies were in great number, but varied, and the lore appears to be worth looking into in more depth.

I can see the beta putting off some newer players but any SoulsBorne fans might find a new game to feed that hunger for demonic slaying. Even when I stopped playing I found myself not being satisfied with where I left it, and wanted to jump back in to start cutting off limbs. I would advise everyone that might be on the fence to play Nioh, get an idea about how it all works, and then decide closer to the time if Nioh 2 is something you can or can’t live without. Something to keep in mind as well is that this is just the beta. A lot could be implemented before its release next year and improvements will undoubtedly be added. So, with that I say play the first game.