So this will be my first video game review in a while and it’s all Persona 4 Golden’s fault! This game sucked me in like a high class call girl with daddy issues. But I finally finished it after about a week of solid play, I’m talking all day, every day, and it’s finally finished…….what’s that? What do you mean new game plus mode?... Bollocks!.

Persona 4 Golden is a Japanese role-playing game, and it happens to be one of the most engrossing games I have played in a long time. It’s a great story that surrounds fascinating characters, a combat system and an interesting time mechanic that adds a sense of urgency to proceedings. It also deals with some of the most complex issues in a video game that I’ve ever come across.

You play as a high school student, who you get to name, who has recently moved from a large city to a much smaller town called Inaba, where you must live with your uncle for a year (Very Fresh Prince of Bel Air). You quickly make friends with Yosuke Hanamura, who is the best friend a guy could ask for (yes I realise he’s not real and I’m technically an adult), Chie Satonaka, an ass kicking fire brand and Yukiko Amagi who is also there. After a few days a strange murder takes place and your friends fill you in on the “Midnight Channel” rumour which leads them to the TV World, which is inhabited by enemies called “shadows” and also an anthropomorphised bear called “Teddie”. The story is a murder mystery so I don’t want to reveal too much about it. 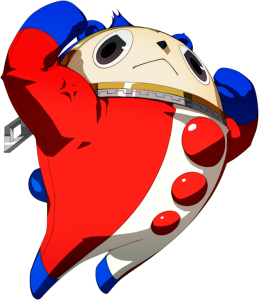 The characters of Persona 4 are some of the best I’ve come across in a long time, there is a mechanic within the game which benefits you in battle the closer you are to the person, but I found myself trying to get to know them or get closer not because it benefited me, but because I was genuinely interested.  This was especially true for Nanako, who is an NPC, I found her to be a lonely little girl, with an absentee farther, which brought out the big brother in me.

The main thing that stood out for me was the way the game handled self-perception. So essentially each character gets a persona that helps them fight, but in order to get them they must first encounter their “other self”. This “other self” is a warped manifestation of that person’s fears of how others perceive them, for example the character of Kanji Tatsumi is a rough, tough, bad boy, but his “other self” is a stereotypically gay version of Kanji in a speedo. It turns out that Kanji enjoys knitting, sowing and other traditionally feminine pastimes, which, deep down, he fears make him gay. I thought it was a wonderful examination of the masculine ideal. 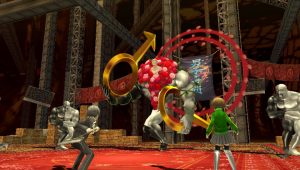 (It’s subtle, but the implications are there)

Similarly Rise Kujikawa, a former teen popstar deals with her own warped persona, who is scantily dressed and acts like a ditzy stripper. It shows her greatest fear to be, that people only see her as a “hot body” with nothing inside; both Kanji and Rise must accept that these “personas” are only a small part of them.

Another thing that stood out for me was the time mechanic, time progresses in game and the protagonist must live their life, go to school, get a job to earn money, study, socialise and stop grisly murders. However if you spend too much time dicking around and fail to prevent a murder, then the person dies and you must turn back the clock seven days and try again, losing all progress, it adds a real sense of urgency.

And of course the music, the music in this game is amazing, from the fast paced battle music to the sombre, melancholic music you get when sad things happen. It really is best experienced first-hand.

The issues with this game are few and far between, the only thing that stands out in my mind is that certain enemies can be a bit too strong at times and if the main character dies you must restart the level and for a first time player it can be hard to differentiate between easy enemies and tough bastards.

Persona 4 Golden is by far one of the best games that I have ever played, a gripping story, wonderful characters, amazing music and an art style that is just beautiful. Even if you’re not a JRPG fan I would recommend this game because honestly, it’s just fun.