I was but a young lad with birthday money and a less than vigilant mother when I first bought and played Resident Evil. Of course, that was almost two decades ago (sweet Jesus), so let’s see if the HD remaster can live up to my nostalgic sugar-coated memories.

I have been pouring over my list of video games, agonising over what to play and, God willing, review. I could play Far Cry 5 or I could wander around a mostly empty field, punching myself in the bollocks, achieving largely the same experience. But then I thought, “stuff my reviewer integrity, I’m going to review Resident Evil, one of my all-time favourite games and arses to anyone who objects!”. And rest assured this is not because it was free on PS Plus months ago and I’m too cheap to buy a new video game, oh dear me no, it’s because the original was a classic.

The original for the PSone happened to be my inaugural introduction to horror in any media, and by Christ it was the equivalent of being thrown into the middle of the ocean to learn how to swim. And while that does afford it a special place in my heart, I’m not going to play the original when the HD remaster is winking at me seductively from my PS4 games library and whispering, “Come and enjoy my fully rendered cut-scenes and improved voice acting”.

For those of you who haven’t played it (what’s wrong with you?), Resident Evil HD is a third-person survival horror game set in Raccoon City. You play as a member of the elite police unit S.T.A.R.S (Alpha Team) who have been sent in to investigate a series of strange murders and also make contact with Bravo Team. But before you can even utter the phrase “what could possibly go wrong” the helicopter crash lands, you’re immediately set upon by zombie dogs, and forced to hide in a nearby mansion. 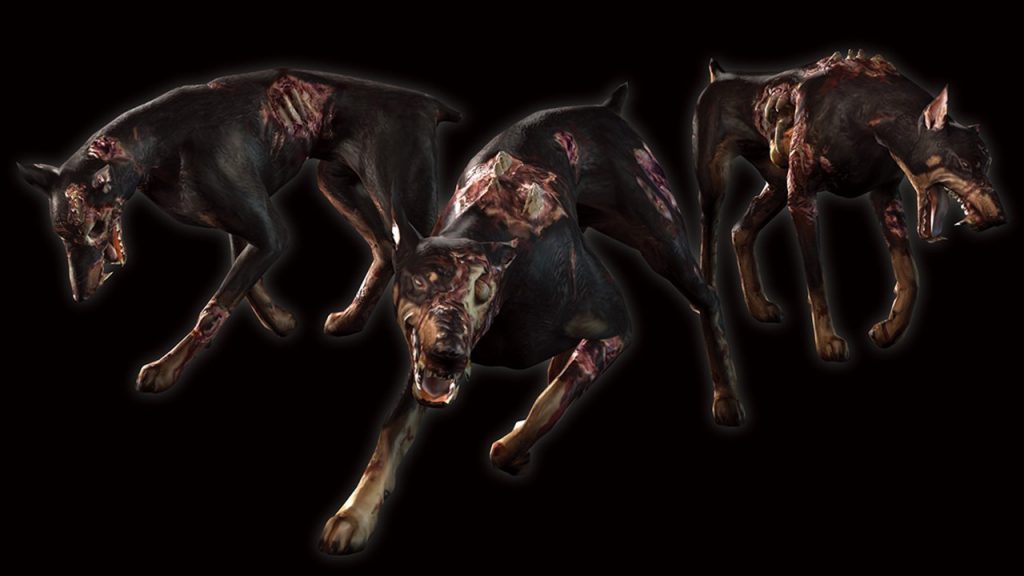 You can play as one of two characters, Chris Redfield or Jill Valentine, each with their own set of strengths and skills. Chris can deal and absorb more damage, where as Jill can carry more items and pick locks giving each a unique and distinctive play through. Once you’ve chosen your character, you then immediately split up (for some reason) to search for clues, all while avoiding zombies and traps.

Resident Evil has a great atmosphere surrounding it and I don’t just mean the horror aspect. It has a mysterious air to it, after all the player is dropped into a strange environment with no idea what is going on, they can only piece everything together talking to npcs, reading logs and pushing forward. 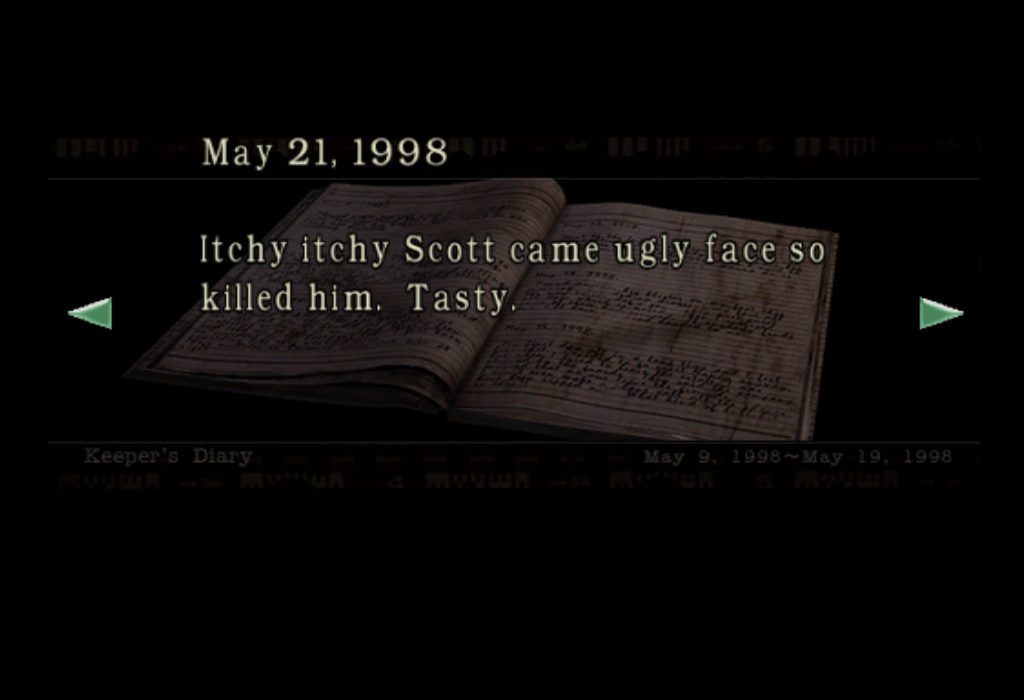 For my first play through I chose Chris, opting for the old school look, because the new Chris looks like a date rapist from the Jersey Shore. When I gained control I began to investigate, with nothing in the immediate area I pressed forward and encountered my first zombie. Like the dumbass I am I proceeded to attack him with a knife, he bit me, I tried again and promptly died. This earned me my first trophy “get used to it”, as if the game was saying, “ha! You suck.” After reloading and just running passed my undead friend, I got my pistol and decided to exact petty revenge on that zombie bastard, but he was gone, “oh dear” I thought.

This is something Resident Evil does beautifully, it creates a tense, oppressive atmosphere by fucking with the players mind. By giving the enemies agency, and a somewhat less than predictable nature it removed any sense of confidence I had and left me feeling tense and anxious, terrified about what may be around the corner.

After getting my bearings and wandering around for a while, it all started to come back to me, the need for inventory management. The understanding that not every enemy needs to be killed, because (in the beginning at least) ammo is scarce. It really puts you in the survivalist mind-set because you only get 6 item slots, and while ammo stacks, health items don’t. And if you need to carry a key/puzzle item that’s another slot gone. All it takes is one miss step for you to be ambushed because you weren’t careful enough, wasting all your precious resources.

Again, this is something Resident Evil does wonderfully, it’s another string to the horror bow. It manages to create a sense of dread when you hear your pistol click, feeling the fear wash over you as you realise you’re out of ammo. What most AAA games have forgotten is that fear comes from more than darkness and jump scares. 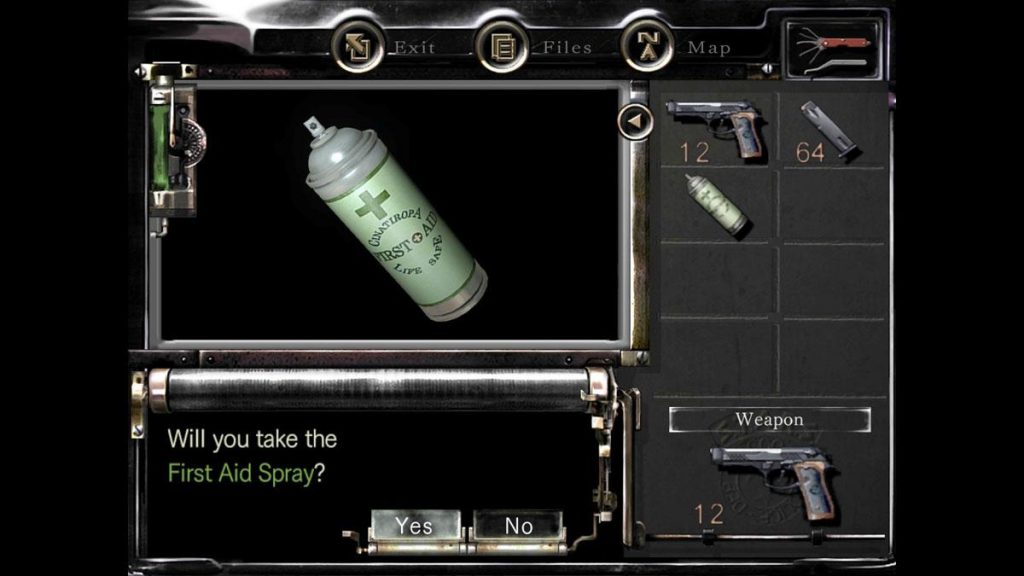 (“I’m not using these bullets on anything less than a pack of zombie dogs!”)

The puzzles are as fun as ever, if a bit obtuse, I’d love to meet whoever designed a house where you might need three sacred gems just to open the front door. You’d be fucked if you lost them on a night out, because I don’t think lock smiths deal in weird satanic doors. But despite their ludicrous nature I never found myself annoyed by the puzzles; they’re the right level of challenging and stupid.

It should be obvious to anyone with eyes that visually it’s a vast improvement from the original, because the original looked like it was made out of origami and nightmares. The HD version however, looks good; I particularly like how the new version uses shadows and reflections to add to the atmosphere. More than once I jumped at my own reflection while walking round a corner. Capcom were able to tart it up without sacrificing the scary atmosphere, something Konami couldn’t manage. 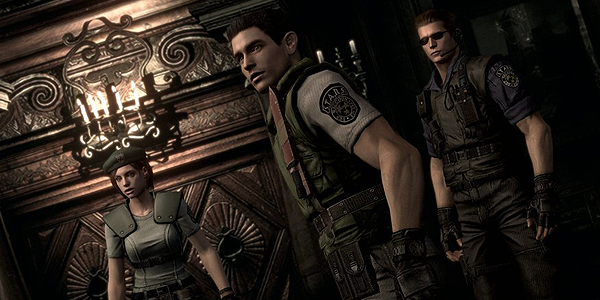 It’s not just the visuals that have been improved, the controls have also had a complete overhaul. Yes, gone are the awful forklift controls (unless you switch them on, like some kind of sadist) making way for something more streamlined and modern. This was my biggest pet peeve with the original and I am so grateful it’s been fixed.

Resident Evil HD has replaced the original in my heart, as far as I’m concerned, the game has only improved with a HD upgrade. The oppressive horror atmosphere is not only still present but has been improved with the graphical upgrade. By removing the janky forklift controls they have allowed for a more immersive experience and the story, while as silly as ever, is still excellent, get this game played today.