Super Dungeon Bros is a colourful “dungeon brawler” brought to us by React Games, which allows teams of up to four players, each player can control a different character and wield a different type of weapon, crossbow for long range, hammer for up close and personal, and a  sword for somewhere in the middle.

So I got my review code for Super Dungeon bros last week and I have to admit so far I have been under whelmed. I had a few issues with it when I first starting playing but once I got past the first few problems, I was hit in the face with more.

The gameplay in Super Dungeon Bros is pretty straight forward, you progress through a dungeon defeating enemies, and with each level you clear it becomes decisively more difficult. Now, the game is designed to be played co-op, but when I started I couldn’t get a multiplayer game to save my life (but I’ll come back to that). Having said that, playing alone afforded me the opportunity to explore alternative means to dispatching my foes, for example in each level there are traps, spinning blades and shooting darts, all of which you can use to your advantage to kill enemies. I found it quite satisfying to lead a conga line of undead jerks to a rotary blade, jump over it and then switch it on, sending bits of bastard everywhere.

Super Dungeon Bros looks great, with brightly coloured characters and a variety of different enemies (which are colourful themselves), it really makes the most out of the unity engine. By keeping the game simple and cartoonish, React Games are able to deliver a stylised and all round good looking game.

As I previously mentioned I have had one or two issues with the game since its launch, such as not being able to get a multiplayer match as no-one was online. Even when I tried to play the game with a friend online, the game won’t let you play with less than four team members and it doesn’t even have bots to substitute real people.

The game also crashed numerous times in the single player campaign, forcing me to restart each bastarding time it did. All that could be forgiven if not for the fact the game is clearly not balanced for single player, it is quite difficult to progress far in the game even with the bonuses turned on. 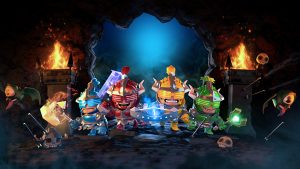 The gameplay all-in-all can be fun, clearing a dungeon of enemies and then offing the boss was very cathartic, and the use of puzzles and traps was a nice touch as well. Once I finally got a friend to sit down and play local multiplayer, it got a lot easier and more fun, and screaming at each other to “stop spinning the blade” or “that was my pick up you bastard” brought back fond couch co-op memories from my childhood.

My opinion on Super Dungeon Bros is mixed at best, there is definitely  some fun to be had with this game, it’s just that it is offset by the amount of dicking around the player must do in order to reach that point. I feel the game was let down by launch day problems and balancing issues. As I understand, it came out free for Xbox live subscribers as a monthly game and if it were to come out free on PS Plus, then I would recommend, but as it is, it’s simply not worth the price.