Ah, it’s that magical time of year, where once again we get to lay the smack down, stomp a new mudhole and delight in destroying the Spanish announce table. Yes, it’s time for the latest Installment of 2K’S WWE series, but have they finally shattered the glass ceiling this time or are we down for the three count?

Not wanting to waste any time I started off with a simple singles match, no cage, cells or rumbles just yet. I decided to go for Finn Balor as my superstar and Sami Zayn for my opponent, just to take the game for a test drive. It wasn’t too long into the match before I had quickly worked out how to grapple, run and Irish whip my opponent into the ropes and turnbuckles, so for the returning player there won’t be much hassle and for the newbie nothing too hard to take in. 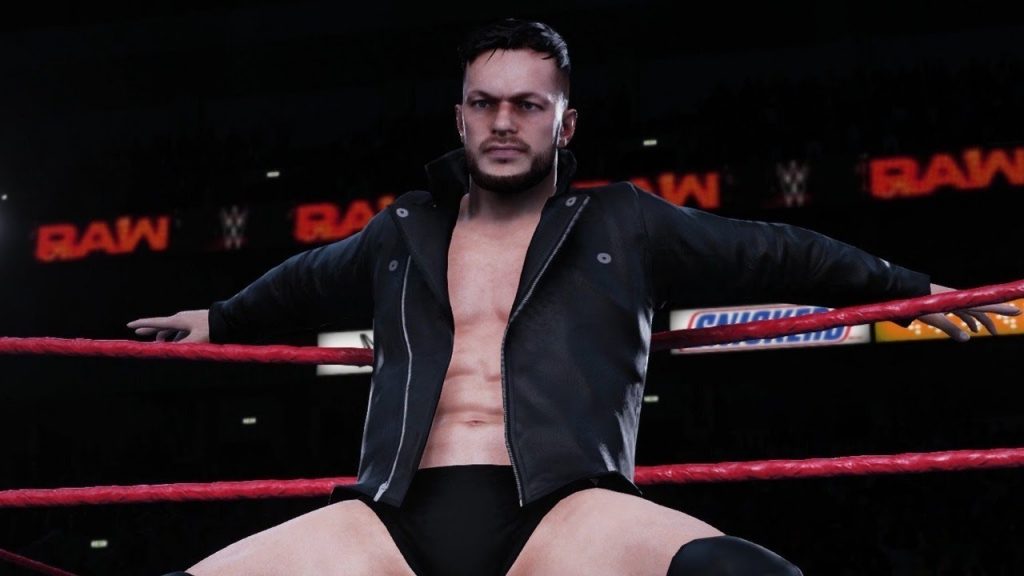 We are treated to some new features, such as being able to drag and carry your opponent into various positions and a two-choice submission system, where you either hit the button on screen or the bar system, which requires staying on top of your opponent’s bar to cause them to tap out. Reversals remain the same, and still require the pressing of the shoulder buttons at the correct time for either a major or minor reversal, and the timing issues are still as big a pain in the ass as ever.

So, we have mastered the basics but sadly as enjoying as this is, it does all feel quite clunky and with a new game engine, and the many years 2K have had to get this right, the game should be running a lot smoother. An example of this is after an opponent had reversed one of my moves and gave me a simple hip toss, I was expecting my lighter superstar to be straight back up or at least have a more noticeable response than the Heavyweight guys. Unfortunately, it just feels like the same pre-determined actions template were copy pasted over from last year. WWE and 2K used the tag line “be like no-one” for 2K18, but with everyone preforming the same generic moves it rings hollow. 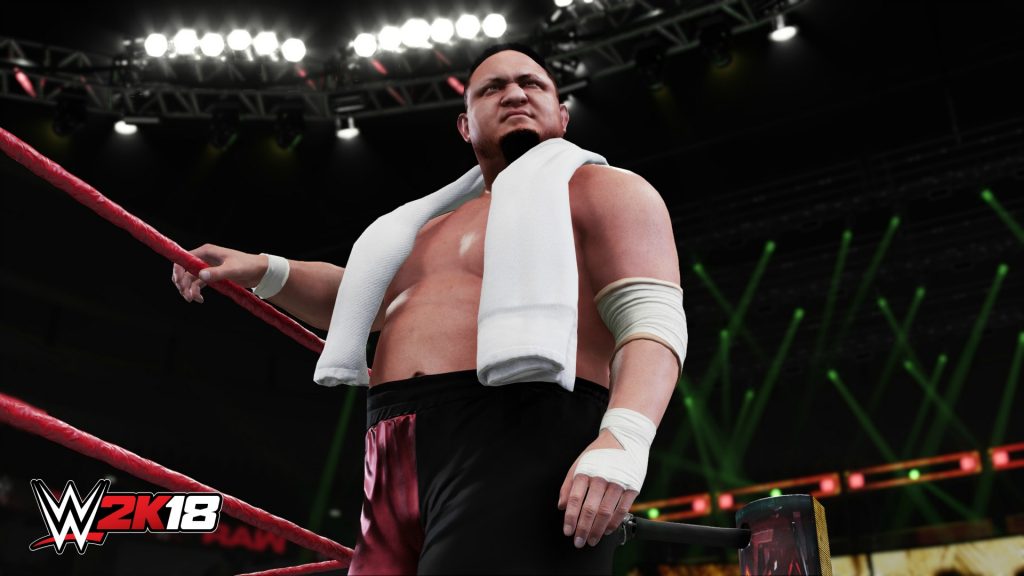 WWE games have never really looked amazing, graphically speaking, and 2K17 had some of the worst graphics ever thrust into human eyes (see Renee Young), so it was good to see a bit of an improvement with this instalment. The Superstars now look more detailed, things like muscle definition have improved and the hair on the characters no longer looks like it was carved from wood. 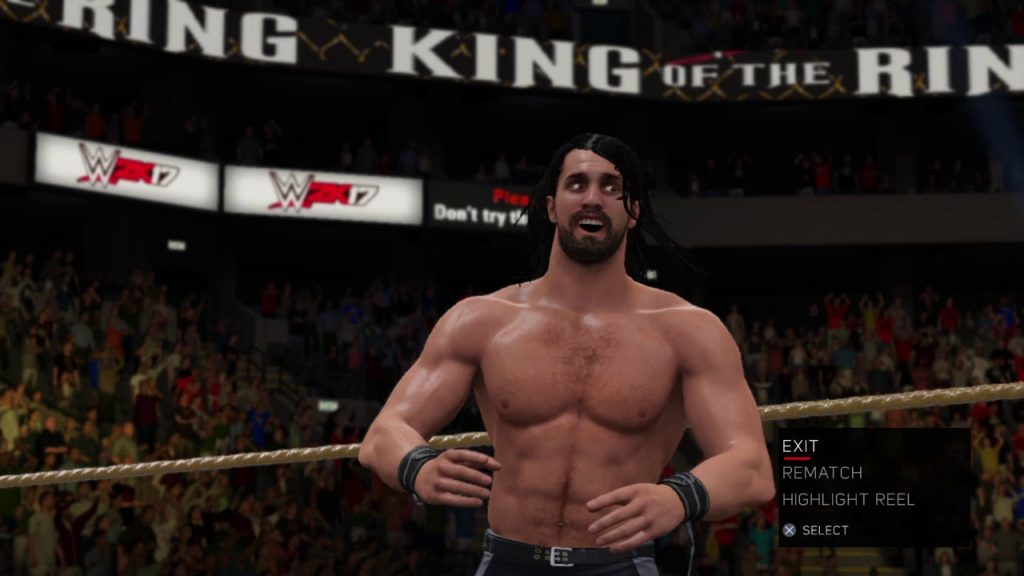 (also, they got rid of Seth Rollins crazy eyes so all good there)

The arena selection is vast and plentiful, featuring a mix of WWE, WCW, and NXT settings which blends nicely between the old and the new.  Deciding on Wrestlemania 33 as my first port of call and picking the night time setting (it was an out-door show), I was amazed by how good it looked. It is obvious that a lot of effort has been put into the little things, such as the smoke, lights, and not to mention the movement and reaction of the crowds is as close to real life as I have ever seen.

There are quite a few issues with 2K18, take the commentary for example, it’s still as pathetic as it has been in previous instalments, wooden and generic, with certain quotes/lines feeling completely out of place. Honestly 2K, if you can’t get it right by now, then just don’t bother, you utter bastards.

And while the creative mode boasts an impressive amount of depth this year, with things like superstar’s tattoos/body/face paint being added, the entrance maker still forces you to choose from a selection of pre-existing entrances. Meaning you can make a completely original looking character, with custom gear but they will still walk to the ring like everyone else, takes the shine off all the work doesn’t it.

Then we have the “my-player” section, like most fans of the series I was very excited when its return was announced during the games development, it meant we were finally able to once again walk around back stage and interact with people. But ultimately, I was left feeling let down as the “backstage” area consists of a tiny “production” room, one never ending corridor with a random npc’ and finally a great big car park/entrance that can only fit one limo. 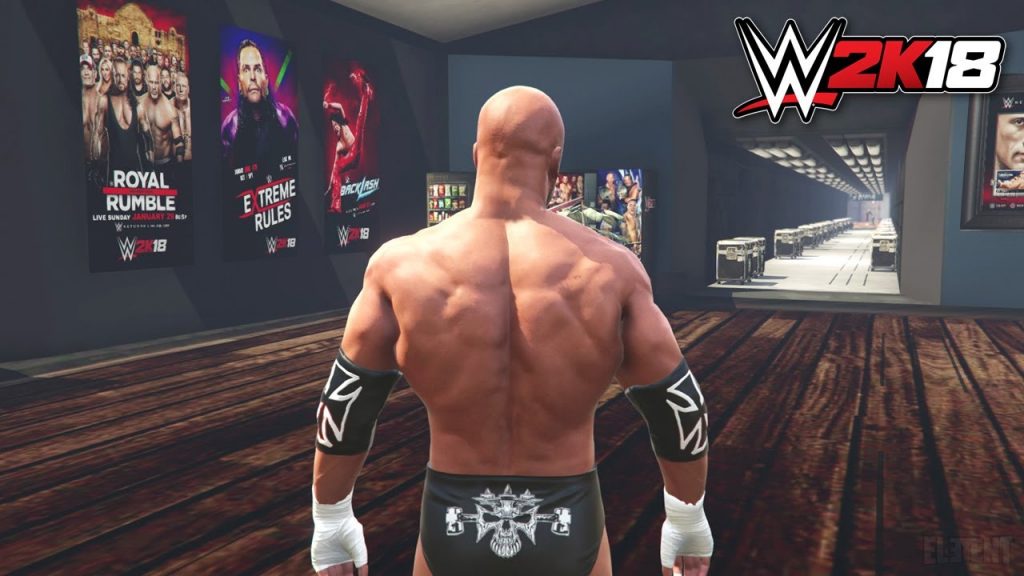 (Also, and this could just be me, but I couldn’t help but be distracted by my superstar looking like he had fouled himself horribly when he was walking around backstage.)

Overall its another case of one step forward and three steps back, is it a nicer looking game? yes, do we have some prettier accessories to put on our “custom” superstar? Absolutely, but this isn’t Barbie’s fucking dress up.  With the horrible commentary, clunky mechanics and general lack of actual game play improvements, it just makes me think its time 2K handed the title over to someone else and stop kicking out at 2 ½.