Shadow of The Colossus HD

Ah, the things we do for love, we recite poetry, compose songs and even make sketchy deals with shadow demons to bring the person we love back from the dead.

I was a massive fan of the original Shadow of The Colossus when it first debuted on PlayStation 2, I have fond memories of performing lizard genocide to improve my grip meter, all so I could scale a massive monster and stab him up the urethra. So, when the PS4 version was announced I was overjoyed that I would get to return to that world and kill sentient mountains, while they try to shake off the world’s most murderous flea.

The plot of Shadow of The Colossus remains unchanged and begins with the main character (Wander) and his equine companion hauling some dead bint to a strange, forbidden temple. With the plan of restoring her to the land of the living and praying to fuck that this doesn’t result in some kind of pet cemetery scenario. You are informed by a shadowy entity that if you want your missus back then you have to snuff out 16 Colossi, but if you do there will be a terrible price to pay, and I don’t think he means a shadowy hand jibber. Of course, Wander being the incredible genius that he is, decides that this all sounds tip top and agrees to hunt down these ancient creatures, instead of, you know, grieving and moving on.

The gameplay is a little hard to pin down, but it can best be described as action adventure meets puzzle platformer, half of your time is spent adventuring through the wilderness, climbing mountains and leaping long distances, all to locate your target. While the 2nd half has you, figuring out how you will scale the colossi and turn their lights out before they can shake you off.

The huge, sprawling open world in Shadow of The Colossus is as unique today as it was when it first launched, while open world games are as common as diabetes in Americans, most of them fail to achieve what Shadow of The Colossus did. They managed to create a huge open world that actually feels huge, and not just empty. A vast and ancient world, that seems like it has been here for millennia, untouched and undisturbed by anyone or anything, a world that you can tell was created for something much larger than man.

Which brings us to the colossi, ancient titans that have been asleep in the earth for so long they have become part of it, only to be rudely awoken by some arse and his horse. Again, these creatures seem colossal, particularly when contrasted against Wander and the surrounding wilderness, their every step shaking the ground, impressing upon you the might they possess.

Another thing I adored about this game as well as the original was the soundtrack, it is without a doubt one of the best in video games. Due to the limited amount of dialogue in the game, it was left to the music to convey the tone, one minute you’re on horseback and the ground will shake, the music becoming tense, alerting you to the fact there is danger near, only to crescendo into the most excitingly fast paced music as battle commences. But as soon as you deliver the final blow, the exciting battle music abruptly stops, and is then replaced with a sombre melody, that leaves you questioning your own morality. 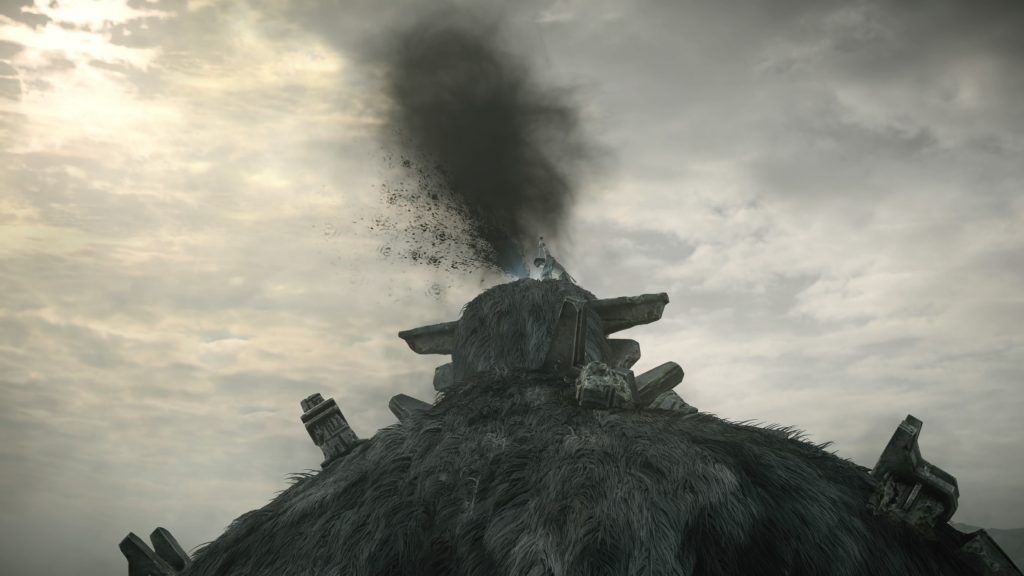 It also happens to look gorgeous, from the intricate architecture of the temples to the lush, green beauty of the forests no two areas are alike. Each have their own unique look and feel, their own life and energy that the player can spend hours exploring.

While I have much praise for this game, it is not without its issues or should I say issue, the controls. The original had problems with the controls as well, and while there have been some improvements in that regard it’s still a bit of a pisser. For example, when I am climbing around on the arse of a giant behemoth and he suddenly changes direction, Wander will be tossed around landing upside down and whether up makes you move forward is left in the capricious hands of a malevolent trickster god who hates you. And this is not helped by the fact that the camera appears to be in on the joke and has also fucked with its directions.

Now, I get it, you’re meant to feel disorientated, you are after all climbing around on top of a giant monster, the controls don’t start pissing in my cornflakes until you realise that sometimes the controls don’t change. It’s the fact that they cannot be relied upon to act consistently, and for the Team Ico purists out there yelling “Get Gud!” at this complaint, suck my taint, bad controls are bad controls.

Shadow of The Colossus was an amazing, one of a kind game and the HD remaster lives up to that legacy in every respect. Fans of the original will love it, as It is still as beautiful and heartfelt an experience as it was when it first debuted all those years ago, and newcomers will be blown away by this wonderful masterpiece.