As Far As The Eye

Once again, some unseen force has vastly overestimated my abilities and put me in charge of other virtual lives, to keep them safe, guide them and ensure that they reach their destinations, or just die horribly. One of those options will happen more than the other, but it won’t stop me from trying anyway. AFATE is another indie sim game for Steam that will see the player guide a tribe to the centre of the world to escape a titanic flood that is engulfing the land. Just think Noah’s Ark but with people, and no boat.

My job now, is to manage the journey of a tribe of adorable little animal things, as they travel to safety, staving off their hunger by farming for food, improving their structures through crafting, preparing for events and running away from large volumes of water. I am the wind that will push these little animals towards the only safe haven during this event, called the Eye. This is a turn-based strategy that requires the tribe to make their way through different areas referred to as halts, where they stop to get supplies, and to move past these halts the game tasks you with meeting the objectives. That can range between putting together a certain number of materials or having a pupil level up and can be a mix of different goals. All of them are to prepare you for future challenges because they help strengthen your position. I use up several turns during each stay at a halt, each halt at a stay, whatever, before we pack our shit up and move on, so it is imperative to make the wisest choices possible to ensure the safety of the tribe. To make the best of my turns I can assign tasks to my pupils, specifically tied to the goals, such as building huts and gathering food. Completing tasks and gaining experience will level them up, and they will develop their abilities down some pretty standard skill trees, which will eventually become more specialised. It’s very straightforward, so there isn’t much work or micromanagement required to improve your nomads, and a cool little feature occurs whenever they start working on certain tasks, is that your nomads will change into different animals based on those tasks. I’m not sure what purpose it serves, but they look so cuddly, so I don’t mind. Kind of wish I could do that myself. They each hold little balloons, for some reason, and I haven’t discovered why just yet, but I don’t care. It’s super cute and I fully accept that they have them, but it does make them easier to spot. Because I am the wind, known as the Sigh, a deity, they feel a spiritual connection with me. Hmmm, that may explain the balloons then. Anyway, they are a peaceful group, and are at one with nature. They are also a very generous folk, capable of sharing food with other passing tribes, and willing to recruit new pupils into their tribe. This also comes with extra responsibilities and consequences. Having extra hands to do work, but also extra mouths to feed. They will require more huts for them to live before they can start working but will happily eat their share of the food whilst the building commences, taking time away from other gathering to accommodate the new arrivals.

They will also come with randomised skills, so they might end up stacking quite poorly against your other pupils. They will pick up little traits too, as they explore the environments of each biome, and these traits can be positive, negative or both. Visiting ancient sites will let pupils gain new traits, and they can help or hinder depending on what they have. Some of the best traits are those that result in consuming less food, because these fuckers are hungry, and what they do can hardly be considered “work”, especially when gathering food just requires them to do a little ritual and the food just springs from the ground. (“Dammit Doug, that was my twinkie!”)

It is advised to never take more than what the land offers, because that seems to invoke the wrath of the other gods that I don’t know about, and I’m glad because they seem like dicks. Whenever it was time to pack up and leave, we had to take everything with us, and this was my first failure. So, when you put everything together for a trip it seems like a good idea to forage for as much food as possible, right? Noooooooo, because that only invites trouble. The game has a sneaky way of kicking you in the balls when you aren’t looking, and it can be very punishing. I used up all my turns pulling together food, but that only resulted in not being able to carry everything, so those turns were wasted. 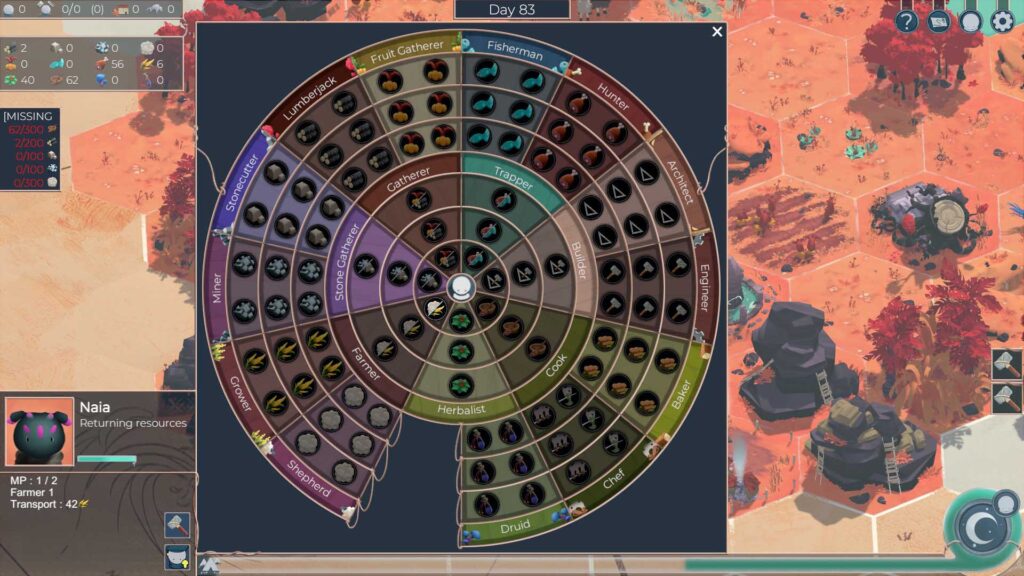 Then I get hit with a disaster, and some of my pupils are sick, so I had to spend turns healing them, and then couldn’t bring together enough food before using up my turns again and it turned into a vicious cycle from there. There is a lot worse possible, like forest fires and smaller floods, illnesses and so on. These occurrences are called vagaries, and they can just happen with little notice, so it’s impossible to be ready for everything but they are enough to tip scales severely out of your favour. For me, this was where the game felt incredibly unbalanced. It can be beyond frustrating getting so far only to fail, and failure means starting all over again with a new tribe, losing those valuable little guys that you already spent time on. This is countered by how addictive the gameplay is, because it’s a game where you want to succeed. It doesn’t prove anything to anyone but yourself, but when you see those little faces of theirs you just can’t disappoint them. (“Did you see the clown with a red balloon? He seemed nice…”)

Each environment looks lovely, with strong burning reds and oranges contrasted beside deep blues, it’s a very nice-looking game. The UI is not overwhelming and doesn’t get in the way of the beautifully rendered maps. There is a nice soundtrack that has a way of keeping things calm and gentle, because it’s a very different atmosphere. There are no rival tribes to fight, no enemies or violence, and nothing to protect yourself against besides starvation, sickness and the super-flood. It is intended to be more relaxing, taking away the panic of dealing with attacks but replacing that panic with the fear of having to deal with the other disasters. Luckily the controls are easy enough to get used to, as a few simple clicks gets things going, but all of the lore an notifications are in text only, so there is the issue of getting lost amongst the words which is a pity because the lore is quite a nice touch to this colourful world. AFATE is a relaxing game on the surface, but it disguises a clusterfuck of horrors, which is probably as close to reality we would get in trying to organise a group of pacifist animals whilst they build bakeries and dance for vegetation. With wonderfully paired colours, soothing music and no threat of enemies it is a very easy game to get stuck into and is addictive enough to remain involved. However, it can be terribly unbalanced, and it almost feels intentional at times, no matter how well you plan your journey. One of the biggest examples is that bakeries and cookhouses only deal with certain types of foods, so if you had fruit pickers and farmers donating food to your bakeries you are golden, but if you arrive at an environment heavy with game and fish then you might suffer a lack of food, endangering your little fuzzy friends. Then if they get sick you are using up your turns to look after them. It is certainly a challenge, and part of the charm is being up for that challenge, and any game that requires managing resources and such is usually a positive for me. But it becomes quickly irritating when you’ve hit a wall and need to start again. So, I think I will just stick with the violent games, even though I’m not a violent guy (unless the wi-fi is slow).

As Far as The Eye Jude Strategy