Journey To The Savage Planet

A cheerful first-person adventure game set in a vibrant and colourful alien world where life and death have no meaning.

As I jumped my first platform across the blindingly vibrant landscape of planet AR-Y 26, I wondered why my space-suited and booted protagonist had made a noise that sounded more along the lines of a growl than an athletic grunt. Then I remembered, when the game opens and asks you to choose which image from a selection of eight best represents you, seven of which are people, I selected a dog. That pretty much sets the tone for the light-hearted, off-earth adventure that is Typhoon’s Journey To The Savage Planet. 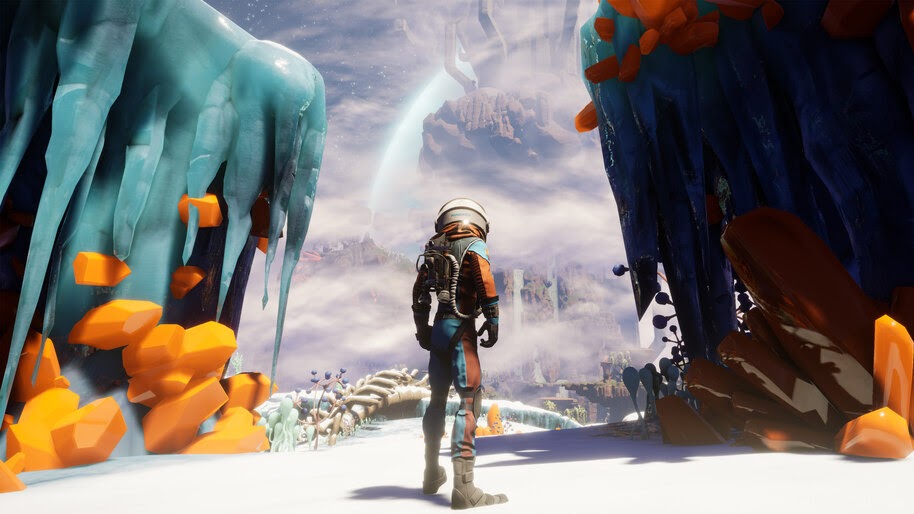 You play as an employee of Kindred Aerospace, an organisation that’s alarmingly proud of being the world’s “fourth best interstellar exploration company,” and tasked with exploring this colourful new planet to determine if it’s fit for human life, scanning and documenting various flora and fauna along the way. There’s also the small task of finding a fuel source that can take you and your spaceship home, an assignment your corporate overlords don’t seem all that fussed about. Your mission is delivered by the company’s eccentric CEO Martin Tweed through a series of ridiculous videos that punctuate the story as you report back your findings, in addition to impersonal company emails praising “[ explorer name here ] on the tremendous progress you’ve made on [ planet name ].” This game had me snortle before the opening titles had rolled. 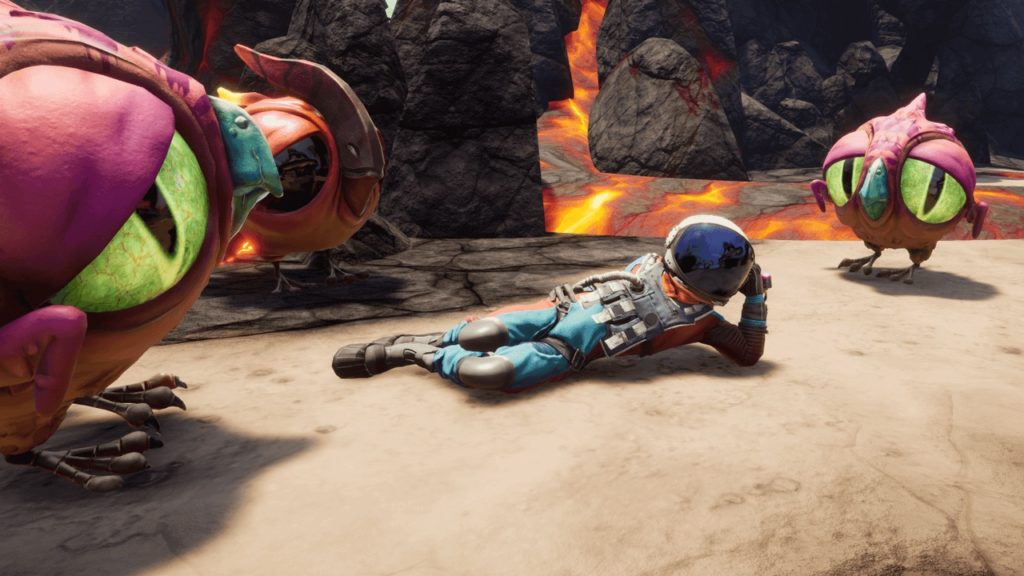 Journey To The Savage Planet is an open world, first person adventure. The more items you collect, the more ground is available for you to explore as you upgrade your arsenal using bits of alien matter to include items like booster boots and a grappling hook which allow you to reach new territories – items your company probably should have provided you with before shipping you off to an uncharted planet but you know, “budget challenges.” 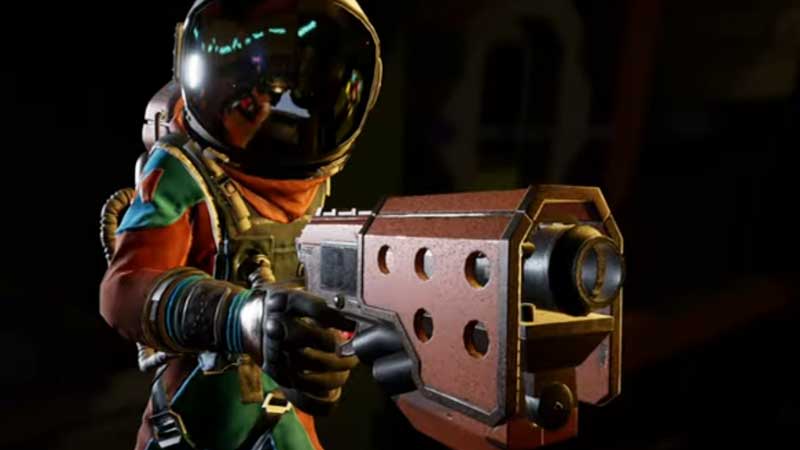 (“God I wish they had allocated me some bullets!”)

I knew the moment Journey To The Savage Planet’s menu screen lit up my television in jewel tones, soundtracked by a plucky steel guitar, that I was going to enjoy this experience. Despite its rather brutal sounding title conjuring imagery of rocky wastelands inhabited by blood thirsty aliens, there’s not really anything savage about this planet. In fact, the only savage around here is you as you boot and blast aliens and ravage their home planet for the benefit of your employer.

Your first encounter with any form of life is a small pack of cute, bug-eyed, owl-like creatures filled with goo. Unfortunately, you will need to give these little critters a swift backhand (it’s a rather flappy backhand, admittedly) in order to extract necessary resources and complete your mission. 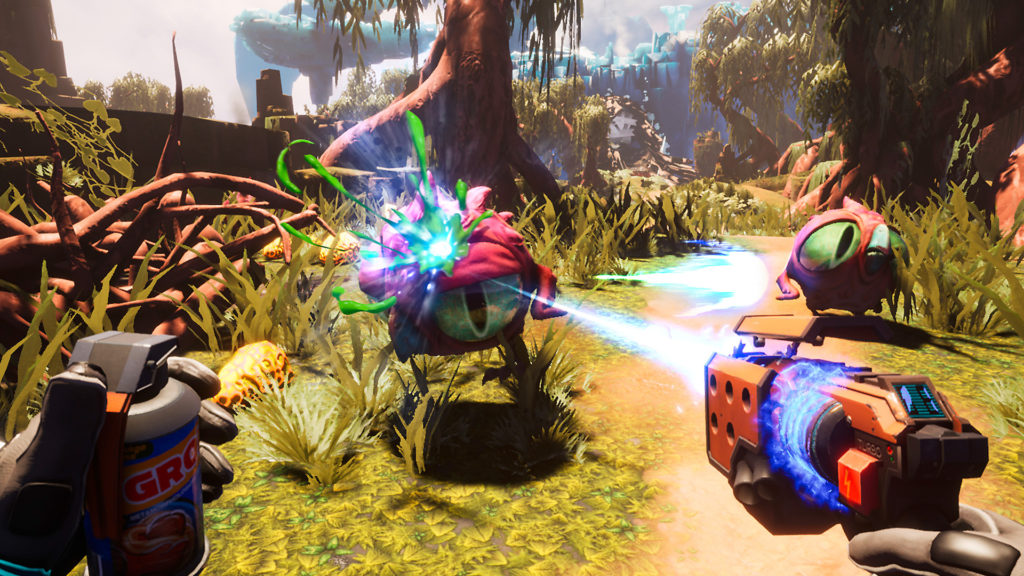 Along the way you’ll come up against various alien creatures for you to vaporise with your laser gun or throw “bombegranites” at, and living flora like meat guzzling plants to feed unwitting furballs to, each with their own witty descriptions to log (example: “This horrible creature’s one and only ability and purpose on this planet is to… barf endlessly.”). The key element here is exploration and the smooth controls on PlayStation 4 make for an all the more pleasant experience. A lot of the time I found myself ignoring my objectives and just wandering round, zapping every exotic plant and jumping around in my moon boots to see how far I could go. In the first 30 minutes alone you go from snow and rocky caverns to lush floating islands filled with jelly plants which you can eat and shrubs spewing hallucinogens. The developers have created a truly delightful, rich world and you will be doing yourself a disservice if you don’t search, blast and scan any inch of it. 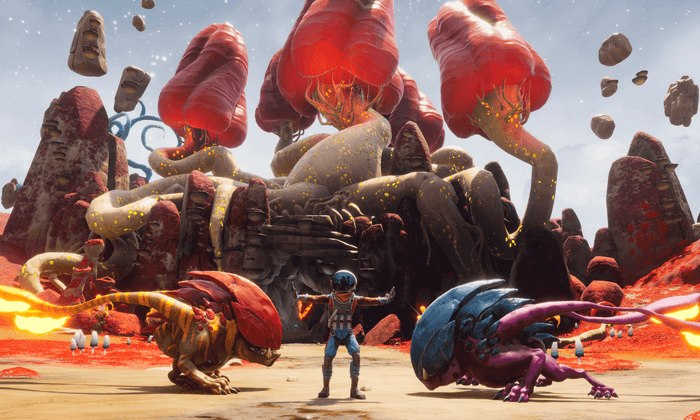 (“Before you kill each-other, I must scan you!”)

Enemies, at times, did verge more on the side of inconvenience than a real threat, not that they weren’t fun to make silicon mince out of. It did get tiresome when you’d clear an area of a pack of flying jellyfish and enter a new section, only to come back to do a little more exploring and find the exact three poison spewing creatures had materialised all over again. Luckily, it doesn’t take much to get rid of them, though some trickier fights requiring you to blast a particular target or dodge explosive plants were a little more challenging. 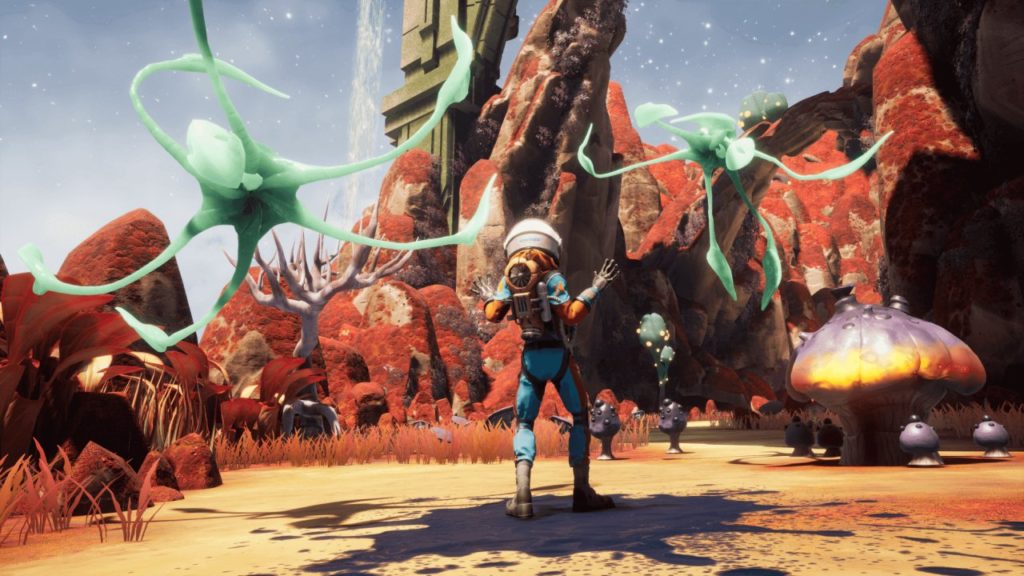 (“Okay, yes, I did harvest your young for parts, but they are..sorry, were so malleable!”)

As we have established from my canine sensibilities, your character’s space-helmet shrouded identity is pretty irrelevant to this mission. You are but a number that can be discarded and remade using your ship’s trusty 3D printer, which also churns out tools and upgrades using your collected bits of goop and special materials. In fact, when you do die, your AI companion will welcome you back with uncomforting quips such as, “How was nothingness?” or presenting the distressing truth that, according to their calculations, if you die and come back 50 times, you technically no longer exist as yourself. I have, thankfully, not yet tested this theory. 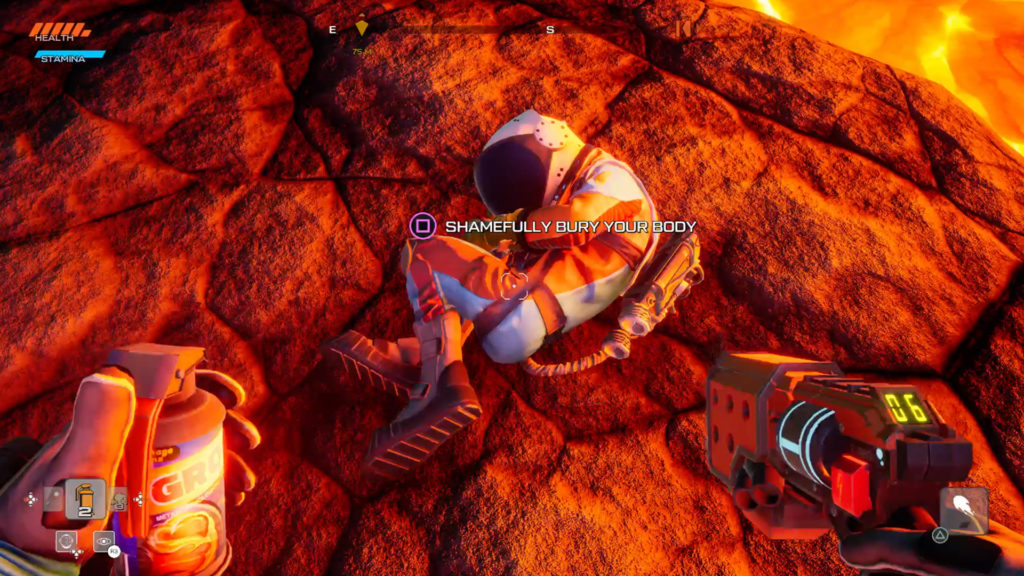 (“This is getting old, unlike this guy! Ha Ha Ha….(sobs uncontrollably)..)

Despite its colourful facade, there is a slightly darker tone underscoring Journey To The Savage Planet which illuminates themes of corporate greed, the thankless existence of working for “the man”, and very current concerns for the environment. Sure, you’ve landed on an unknown planet to find if it’s habitable because perhaps we’ve pushed our own to its limit, but then your assistant will take great joy in telling you that new gadget you just crafted is ever so slightly better for the environment. You take the good with the bad.

The corporate message is emphasised by the loop of adverts on board your ship promoting outlandish products including a Sea-Monkey-like toy which holds a mirror up to the ridiculousness of Black Friday Sales, and a device that can turn leftover meat into a living and breathing companion. It’s horrifying. Funny. But horrifying. 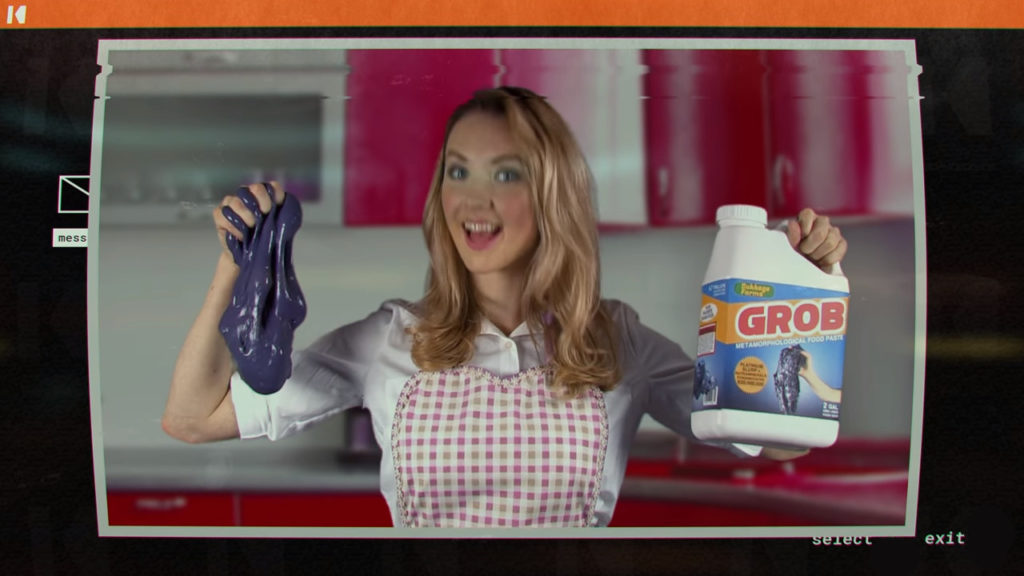 Journey To The Savage Planet feels like it has crash landed onto modern consoles from another time. Its garish colour palette and satirical attitude could have been ripped straight from an early Red Dwarf episode as your fairy-light draped ship draws similarities to the Dwarf’s clunky charm. But that’s not to say it feels cheap, far from it. In fact, for a budget title at £24.99, its packs a whole lot into a sizeable adventure. There’s also a two-player co-op mode if things start to get lonely. While the game doesn’t put forward any ground-breaking new concepts, it wins you over with its bright aesthetic, fun gameplay and personality. I mean, what’s not to like about hopping around an unknown planet as a jetpack-wearing doggo?