By order of the Peaky fuckin’ Blinders, you must inherit the wit of Tommy Shelby to make it through to the end of the puzzle adventure. Taking place before the hit series, Mastermind gives you control of the notorious Birmingham gang as they seek to get ahead of the opposition. Is it as sweat inducing as the TV show, or does it miss the mark?

Having played the first few levels, I think I have grasped enough of the mechanics and gameplay to decide if it’s worth playing through, and it wasn’t too bad, but at the same time it isn’t what I would have asked for in a game about gangsters in post-WW1 England. The TV show, which streams on Netflix and is on its fifth season, is filled with sly tactical decisions, discretion, gang violence and a lot of subverting expectations, so it’s no surprise that the game captures a little bit of that feeling and puts me on the spot that the fearless leader of the Shelby gang, Tommy, often experiences. But the potential feels a little wasted when this could have been more of a Mafia-type game. This feels like it could have been released on Google Play store instead, and for a lot less than the £20 it is priced at. 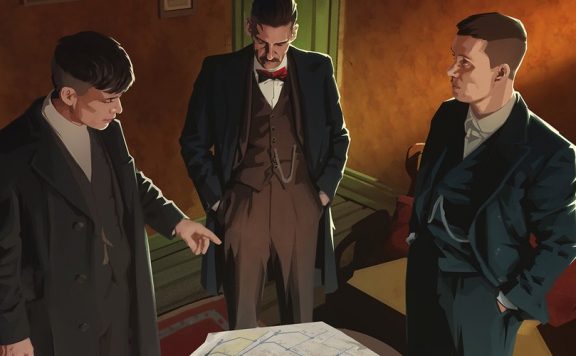 The gameplay is from a birds-eye view, giving me a wider perspective, and from there I take control of different members of the family and use their unique abilities to help accomplish in-game tasks, all of which contribute to the success of a level. Each member must participate, and they need to be in the right place, and at the right time, so thinking ahead is crucial as you use your team to the best of their abilities. With Tommy being the leader, his abilities reflect on his character very well. He can intimidate NPCs in order to get them to do what he wants, so if you need an item, or a door opened, Tommy’s the man for the job. His sister, Ada, is able to distract guards so that the cone that represents their field of vision is temporarily moved, meaning other characters can pass by without risk of detection. Finn, the youngest brother of Tommy, and the smallest, can pass through smaller openings such as windows to get access to new areas. 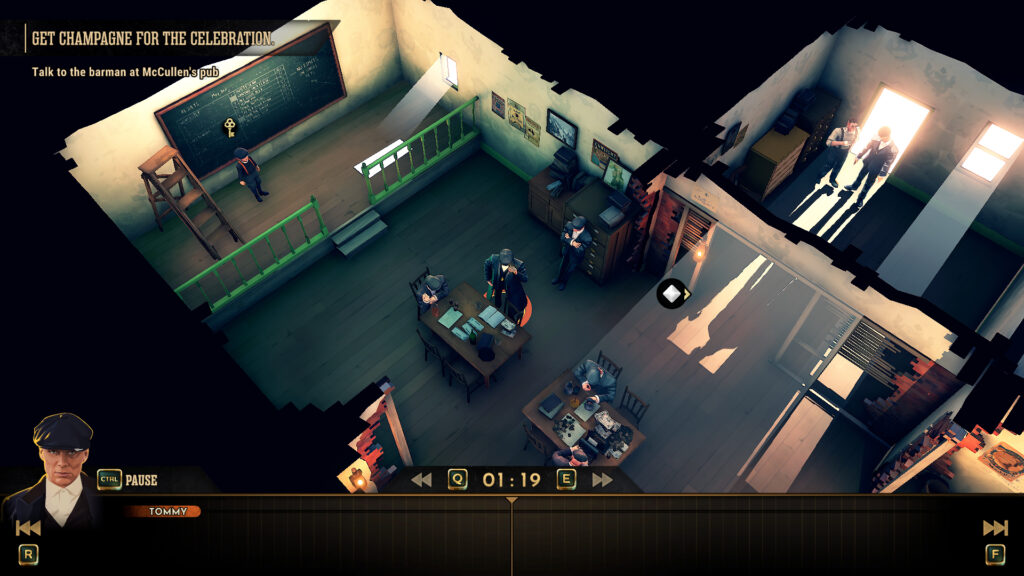 Making use of each character is key, and being quick on the uptake is what will help as you put your plans into action. The other members of the Shelby family will be available in the full version of the game, but alas I never got to see Arthur in action, the one man that puts the word laughter in manslaughter. It’s like a game of chess, but with crooks instead of rooks, and it’s all about the moves. Things become more difficult with each level, with 10 in total on the full game, but by the time you get there it should be a lot easier to work out the best approach, and with a better understanding of how each character can contribute. Because there are timed objectives, the UI contains a timer that will let you know how long you have until you need to be at the right place, but on the good side you are able to rewind the timer, but it will also bring you back, step-by-step, until you’re at a point you think you might have made a wrong decision. If you’re ahead of yourself then you can fast-forward instead. 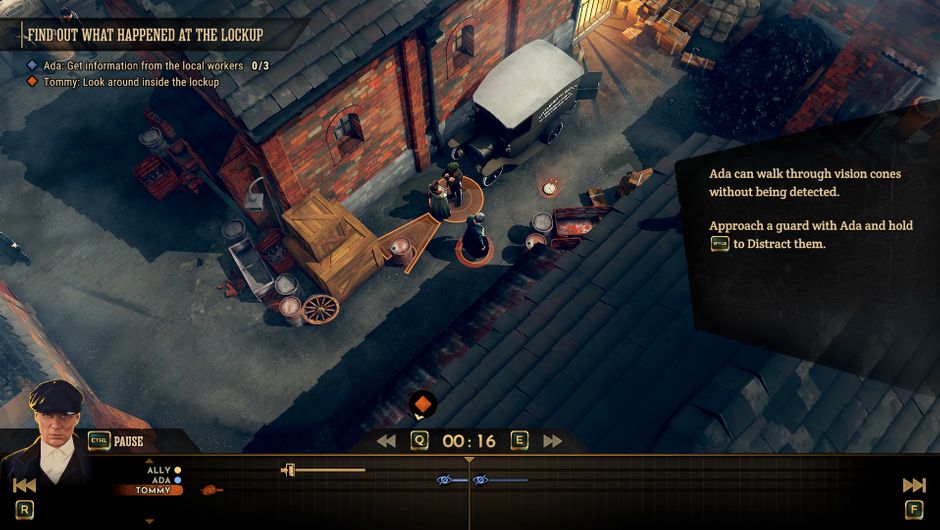 The streets are filled with the sounds of industry, Birmingham being a working-class city, and when you’re walking through you will see a true-to-life representation of that (within limits, it’s still an indie game). There will be some NPCs just walking around, including policemen. There are some scenes that act as the cinematics, still images with text boxes showing us the character that is doing the talking. It’s not hard to imagine the thick accents, but it was a wasted opportunity of not using the actors themselves to record the lines instead of having to read everything. Given that a lot of scenes in the show revolve around some awesomely scripted dialogue between key cast members, being able to hear what they say in the way that they do is an integral part of the show, and Mastermind is missing that. 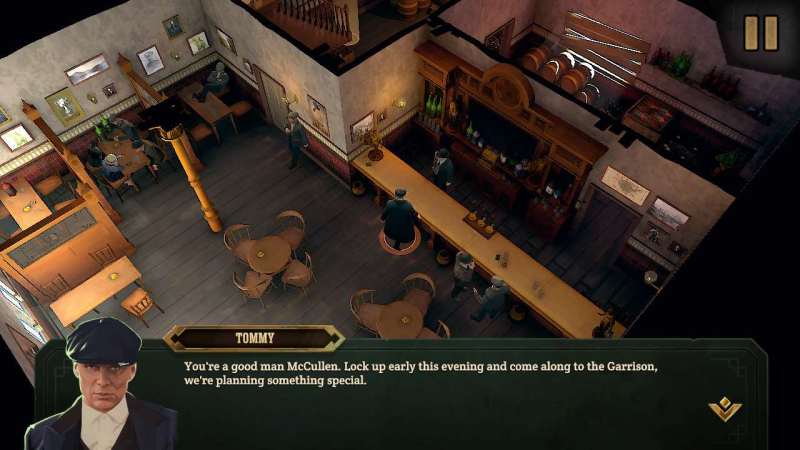 Approaching NPCs that you can interact with will start a conversation, with nice type-writing sounds as the words appear, but it’s more reading that I didn’t want to do because I love the sound of their voices. The graphical images do look very cool, even if they aren’t animated, but the lack of voice acting makes it seem lifeless. When a level is completed you get scored based on how long it took you to finish, with a bronze being the longest, silver next and ending in gold for the quickest. A level can be repeated as many times as you like, and gives you plenty of chances to improve so that eventually it all becomes seamless. I never repeated a level more than once, feeling like once it was done, I wanted to carry on instead. 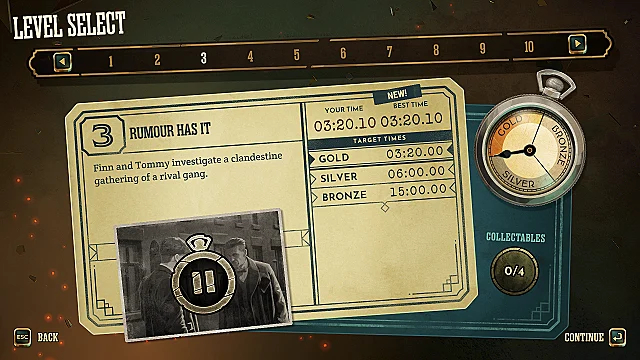 Peaky Blinders is an excellent show, and provides a fascinating setting for an open world game. However, what we were given instead does not mirror the prestige of the show. If it was sold as a mobile game instead, my opinion would be higher, because it is interesting and played around with a concept I’ve never used before. I couldn’t convince myself to part with £20 to buy the full game (£15.99 at the moment for PS+ members), too high a price for what we get. I just spent £7.19 on a PSN game instead, for a much older but much larger game. In saying that, as a puzzle game, it was still enjoyable and it happened to be a mini-game in a bigger title or a mobile version of a GTA/Mafia styled edition then perhaps I would be more likely to recommend this. Everything takes place in a few moments, which are meant to have a huge impact, emphasising the importance of those moments, if only it was expanded upon. I can’t help but think if those concepts were used in a larger game with lots of decision making that influence the outcome then it would be done rather well.