As if Sucker Punch didn’t spoil us enough with arguably one of the best games to have been released in the last decade, and a fun, free multiplayer mode for owners of GoT, we’ve now been given an expansion and PS5 update. It was time to unleash the BANZAAAAAIIIIIII!!!!

The Ghost is faced with a new challenge on a new island in the DLC, with news of a different kind of threat reaching Jin’s ears after encountering some crazed Mongolians. Investigating further led Jin to travel to Iki Island, another landmass in the path of the invading Mongols that they’ve decided to invade, populated by more people you will need to save. The only issue is that this is not Jin’s first visit to Iki Island, having been there 15 years prior along with his father, Kazumasa, and he never parted on good terms with its populace. We have never seen much of Jin’s relationship with his father, knowing that Jin witnessed his death, but not being privy to the where, how and why.

This other army of Mongolian warriors are led by The Eagle, a spiritual individual that is warping the minds of her enemies with a poisonous concoction of her own making and has taken a particular interest in our hero. Whilst facing off against The Eagle he must also keep his own identity a secret as we discover why Samurai, and the Sakai name, are basically taboo with the locals. Jin must confront his past, the pain of which he has tried to bury, but begins to resurface under the effects of The Eagle’s poison, and mend the damage caused by the Samurai’s invasion. Jin starts off by meeting those responsible for beating back his father’s men, the Raiders of Iki, a very pirate-like archetype of different groups that are doing their best to survive the storm of swords and arrows. In order to earn their trust, we need to help build our reputation again, by completing many of the same outpost recovery missions, rescuing islanders, killing Mongol patrols and making your way through the main quest. 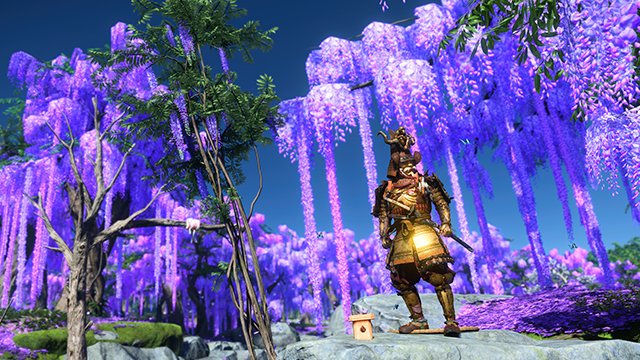 Much of the gameplay does remain the same, and because Iki is only accessible upon completion of Act 1 a new player should be more than capable and would have unlocked enough techniques and skills to be of some help to the Raiders. I loaded a New Game + save, and was already making my way onto the second stage of the story, so my Jin is a walking, talking Grim Reaper of sorts with everything fully upgraded and all skills unlocked, and I would recommend at least unlocking all stances. 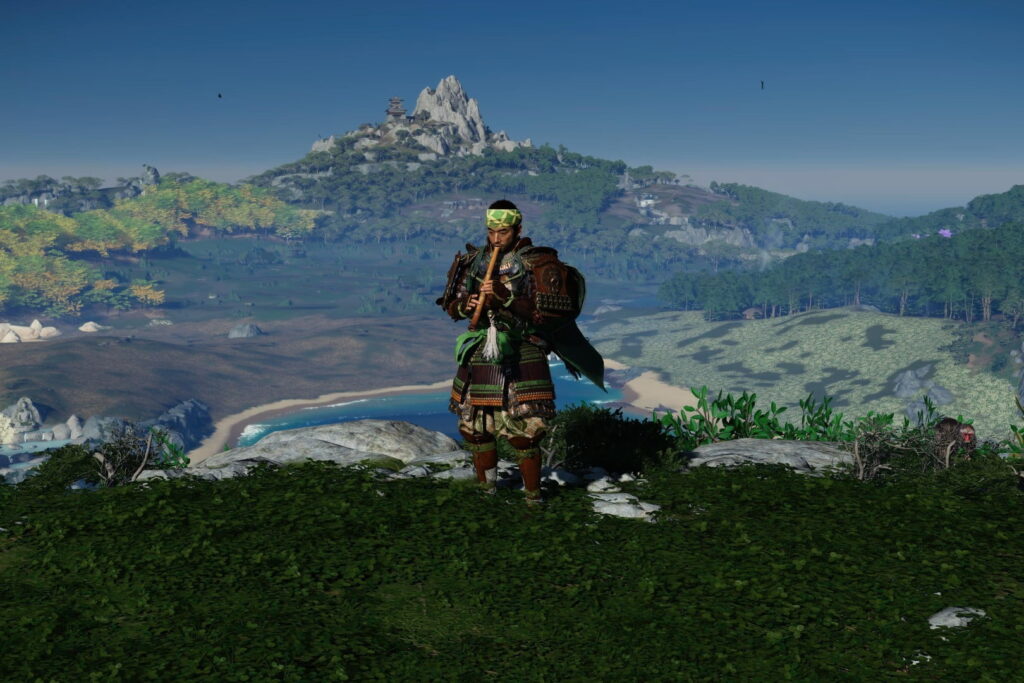 All standard enemy types will appear, from lowly infantry to the more experienced, and heavily armoured, soldiers, so you will be best using the stances to face all weapon types. There are a couple of new enemies, one being a brute with a double-bladed weapon and a very aggressive attack style, an enemy that switches between different weapons, and the then the most dangerous, the shaman. A shaman is not much of a frontline fighter but performs some chanting that can greatly buff those you are fighting. Attacks that would normally be easy to block or parry need to be dodged, they happen a lot more often and will be much faster. On top of that, enemies are more likely to survive a fatal hit. Attacking them first saves you a lot of f-bombs and following the sound waves they emit helps to locate them, as they like to hide, probably shy when they sing. 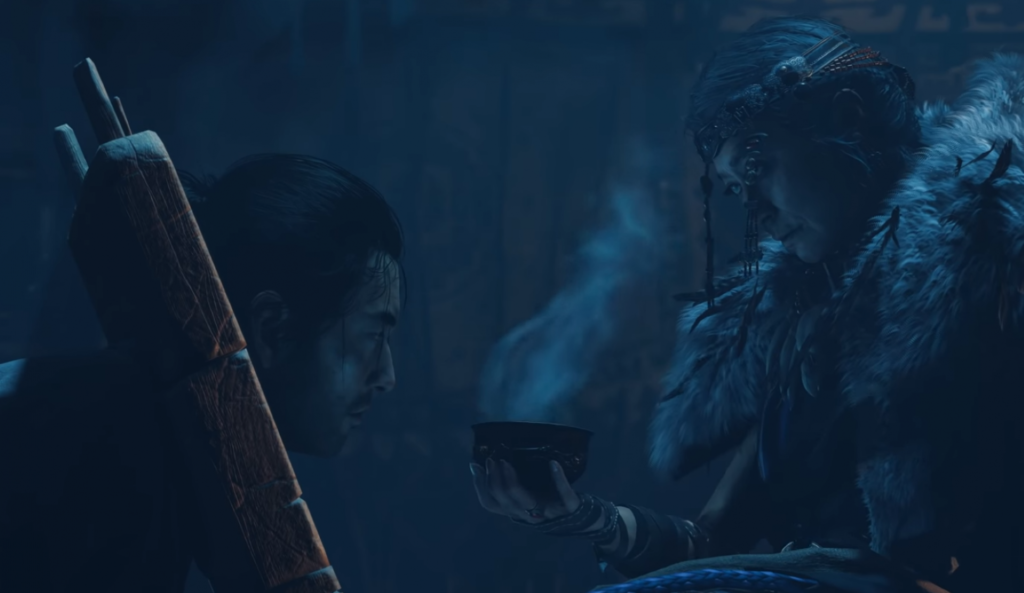 As with the main game there is a lot to discover on the island, with some of the most beautiful scenery I have ever seen, and may not even see again (unless SP make a sequel), and by letting the wind guide you there is plenty to find with some good exploring. On top of the bamboo striking stands, pillars of honour and shrines, there are sanctuaries that house a few new animals that you can see roaming the fields and climbing around, just doing what they would do in the wild. It gives me great pleasure to inform all three of you that you can pet these animals, after you lull them with some skilful flute playing. 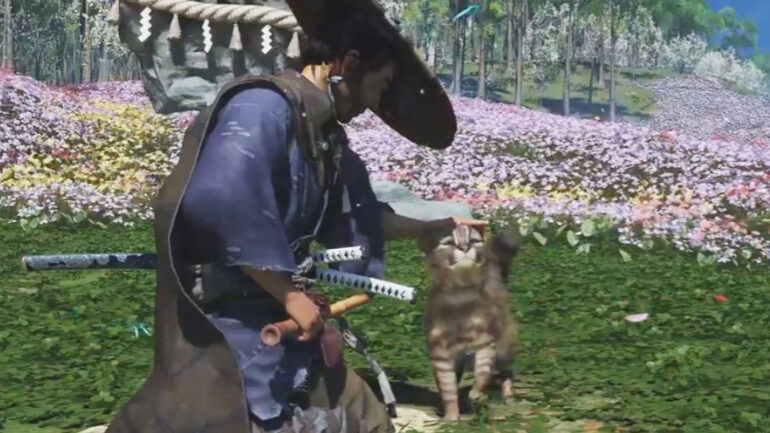 I played this on my PS5, after downloading a separate upgrade for the current gen console, so I can’t comment on the PS4 version, but when playing a tune for the wild crowd I had to move my controller up and down to match the pitch, with some of the sound coming out from the speaker, a pleasant melody that would make anyone walk over to a stranger for some of that hand-on-the-head action. Pulling back the strong of your bow tightens the triggers on the controller, feeling the weight increase the further back the arrow is drawn, and feeling the nice release as you let go. The controller vibrates at a level that matches the action. 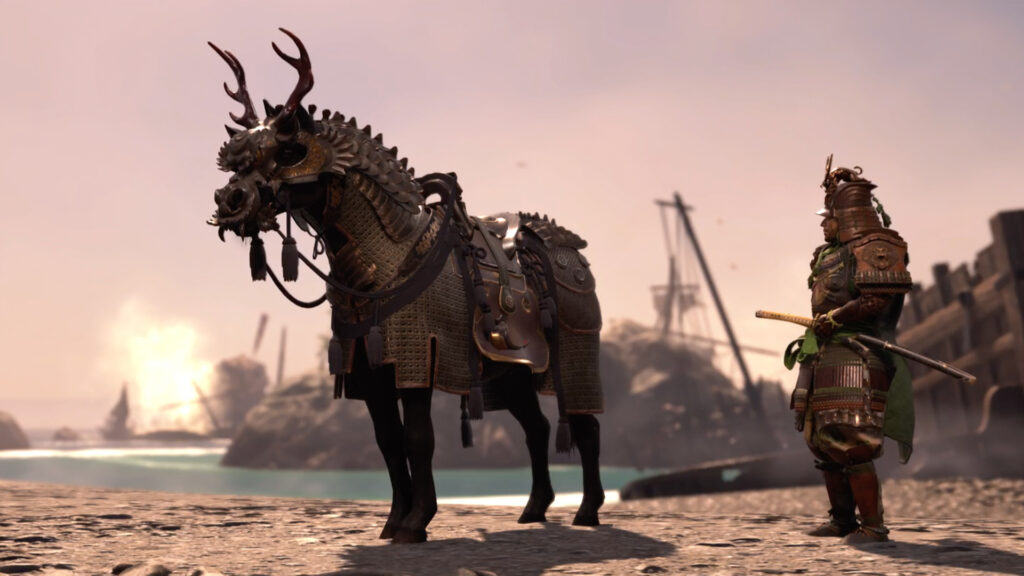 No matter where you stand, the strong colours of the wisteria trees, protruding beams of light, subtle mist and rolling fields of grass look like a moving painting, no stutter and no fuss. On the PS5 it was as smooth as a slow boat ride down a calm river on a warm summer day. Barely a loading screen, hardly any wait time from starting up the game to getting into running around, so it’s perfect for jumping into the action right away, especially after a long day of sitting at work dreaming about games. 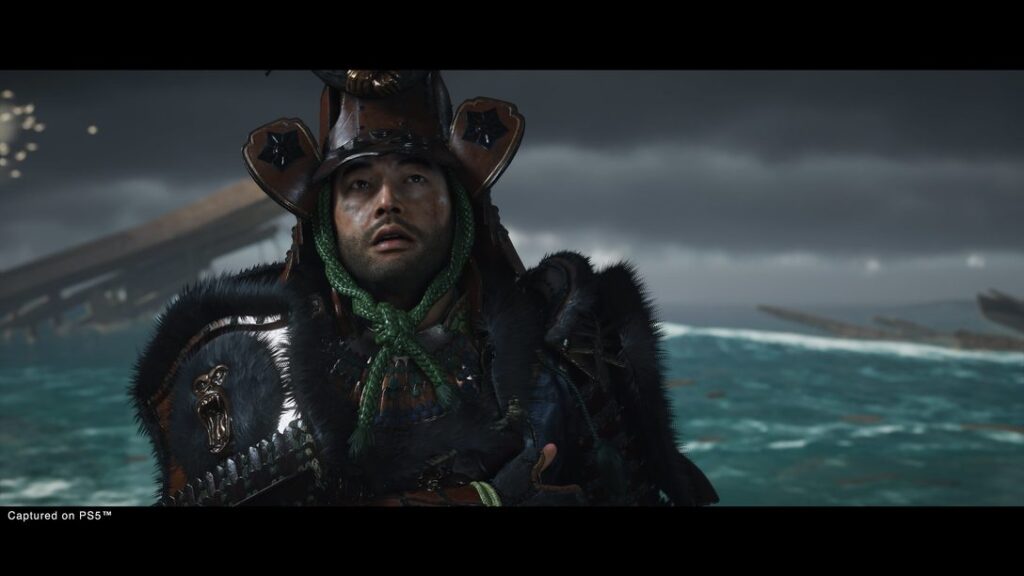 (“I wish I was playing games right now!”)

I mentioned the sanctuaries being new, but there are other discoverable points of interest dotted about the map, along with additional collectibles that reward you with some nice piece of gear. Also making a return are the tales that lead you down an extended path and ending in getting some nice armour, sword kits or masks. Despite being slightly smaller than the Izuhara province from Act 1, I was quite surprised by how many newer items I could get. I unlocked a couple of things here and there just by wandering around and completing quests, and then when I finished an untracked quest (where I needed to find the location without help from a friendly breeze) I got another item, it was feckin’ wonderful. 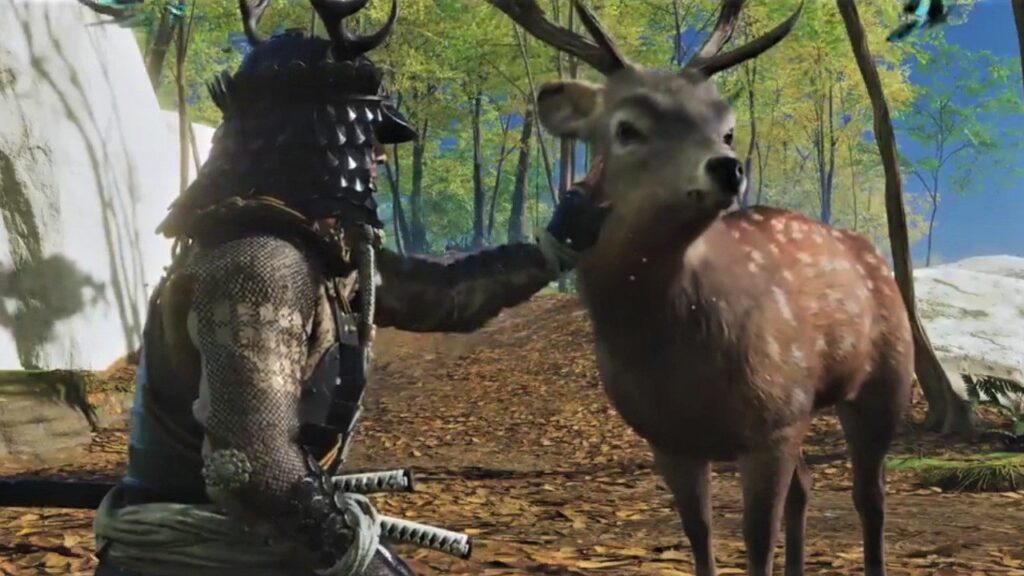 There are a few interesting characters, but their pasts are not as well explored as Jin’s, and the story would have benefitted from a deeper dive into their connections to the slaughter of Iki’s people and how it shaped them into what they are in present time, and how it connects them to what is happening with the Mongols. There are references, but the characters in the main story only seem to be there for Jin to progress to the next stage. The Eagle is the big bad that needs taken down, but you don’t see much of her either. 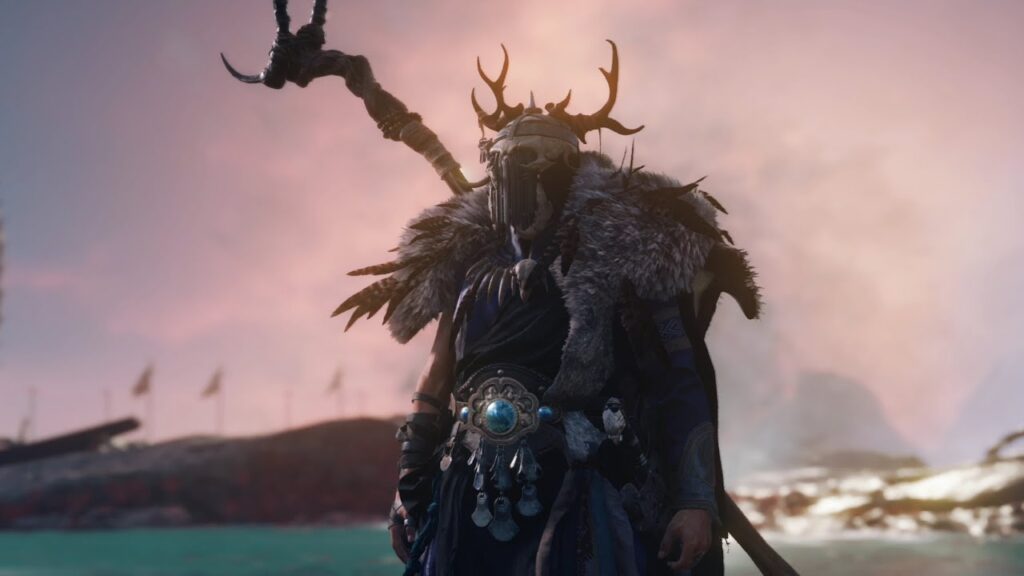 This is balanced out by the strength of her influence over Jin’s self-doubt, usually appearing even in free roam gameplay after certain conditions are met, and even though she’s not there, her voice is there to speak out win order to break Jin down. He faces increasing stress when he comes across reminders of his clan’s previous visit, and although he is very stoic on Tsushima, he finally starts to express his inner fears, but because they are voiced by The Eagle he struggles to face up to them. Although the story begins well, it seems to pass by throughout the middle too seamlessly, and what should be significant isn’t as impactful, but end very well as Jin ties up the strong s of the past with those of the present so that he can focus on a better future (take a shot for every time I type the word “past”, I dare you). 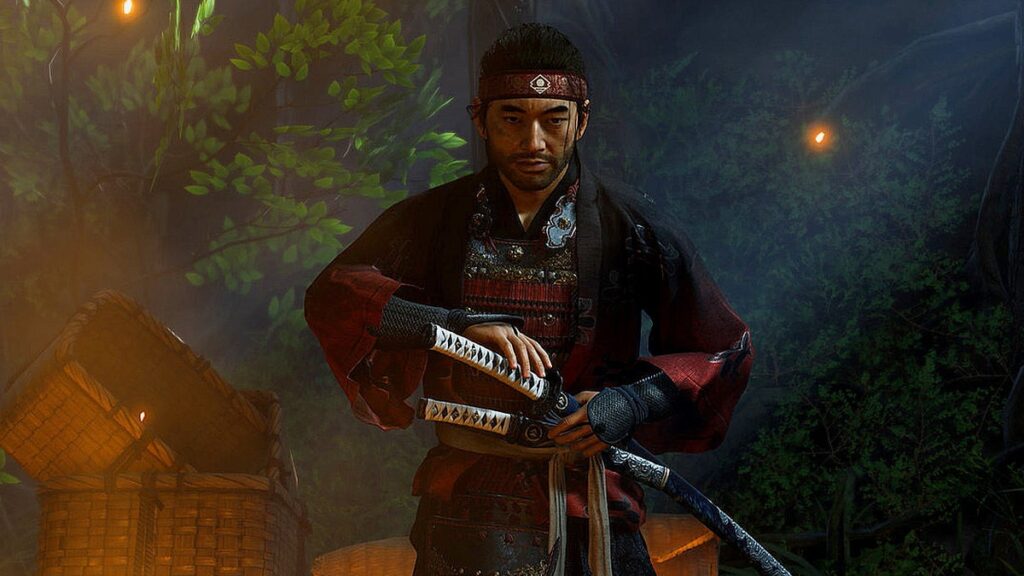 Iki Island gives us more of the same, but it’s more of something that I love so much I took it like a greedy toddler. Despite trying to do this slowly, I got through the main story very quickly, but it still told a decent story, and I learned a lot more about Jin and the legacy of his parents that adds more to the flashbacks seen when going through the Tsushima quest line. In terms of techniques there isn’t a lot more but seeing as there were plenty to begin with it still adds more that can be brought back to the main game. There are a surprisingly varied number of sword kits and outfits to get through merchants with a love of flowers, gathering collectibles and completing some puzzles, all of which can be brought back to the main island too, along with extra dye options. 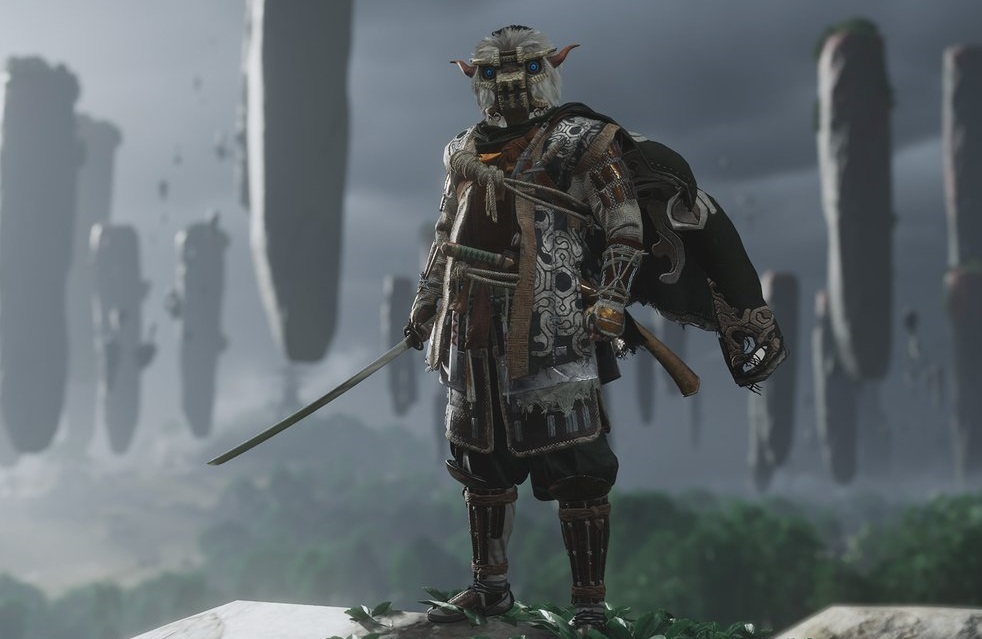 There was a lot of potential for the characters to be more interesting, but they ended up being more of a quest marker to keep the story going, mission by mission. This includes The Eagle, someone that should have been a bigger villain, but little is revealed about her, about how she became what she is and why she is fascinated by Jin and his father. She lacked the presence of a true main enemy, her main interaction being within Jin’s mind, and in witnessing what her followers are doing, but if more could have been told to shape her own history she would have been someone I actually cared about trying to take down. 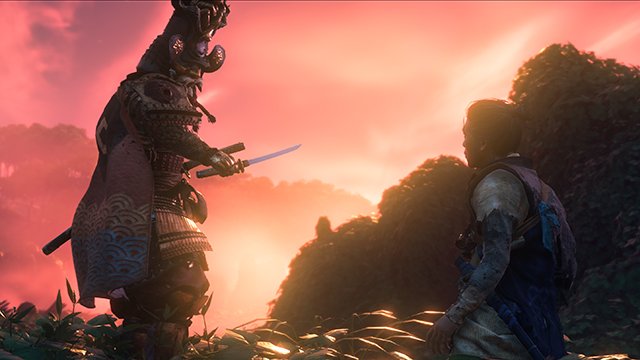 Overall this is a great DLC, and there was no way I wasn’t buying it, but I was disappointed in having to pay for the Director’s Cut upgrade by pre-ordering, and then pay for the PS5 upgrade separately on the day of release. Other games received free upgrades, and I didn’t mind paying extra, but an all in one payment would have suited because my PS5 tried to download both the PS4 and PS5 Director’s Cut, and the price for the PS5 additional features didn’t really seem to be reasonable, but I got it anyway. I don’t regret my purchase, and I’m still having endless fun on both islands.