One of the greatest games of all time, GTA: Vice City has been released on almost everything with a screen, which now includes both Android and iOS, now you can carry the Hawaiian shirts, coked up enemies and vehicular mayhem in your pocket.

The story of Vice City remains the same, it’s 1986, Tommy Vercetti, fashion victim and part time genocide enthusiast, has been released from prison, and before he can even purchase the numbing cream for his throbbing arse, he gets embroiled in a drug deal. Things go south quicker than a quadriplegic in a snow sleigh down the side of Mount Everest, and Tommy must make the money back fast and get to the bottom of who robbed him and his boss. And like any sane man would, Tommy decides to become a gangster for hire, it’s mainly an excuse to steal cars, rob banks and practice your maniacal laugh while mowing down legions of your fellow man. 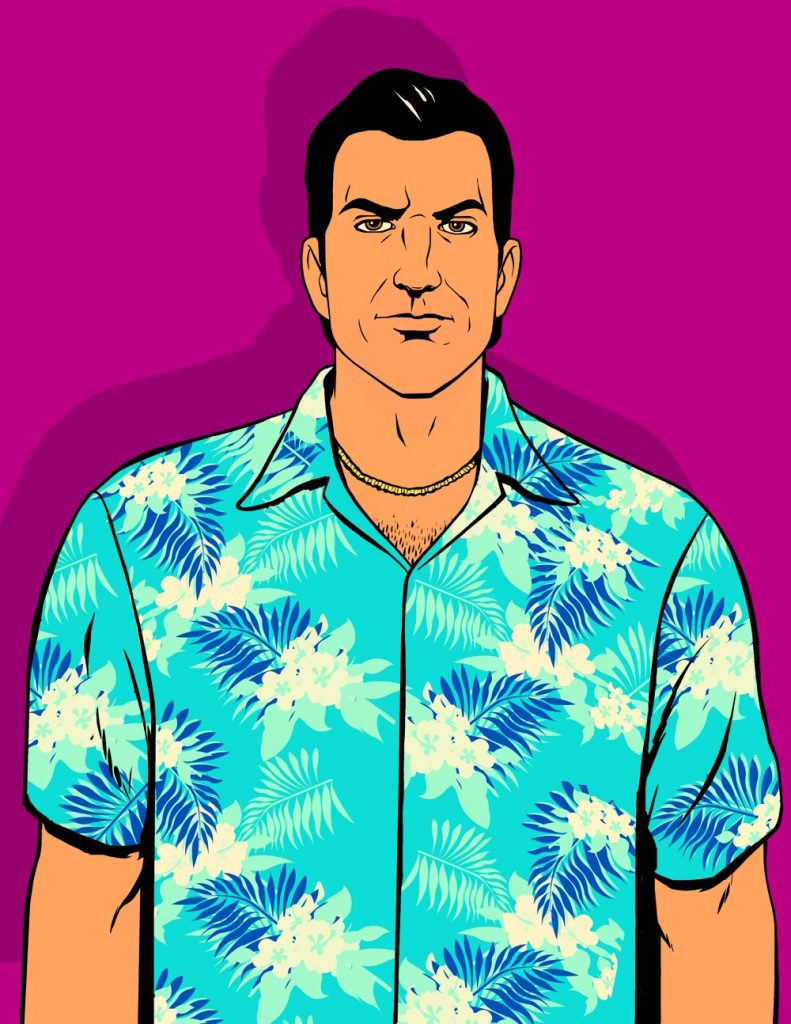 (I can never sit down again)

GTA: Vice City is a third-person action-adventure game, for the most part the gameplay remains largely unchanged from its predecessors. You point your gun at the person, persons or family of tourists (who saved up their whole lives to visit the big city, only to be gunned down by a clownish murderer who wanted to get the highest wanted level), you want dead and you steal vehicles. Only this time around you do it with the touch of a screen.

The controls are functional enough on a touch screen, when you are dandering around on foot with a flame thrower setting fire to everything in sight, however get into a car and it quickly falls apart as you can only tap left or right which can lead to a lot of frustration particularly when you are in trying to flee from a flaming cop car about to explode. 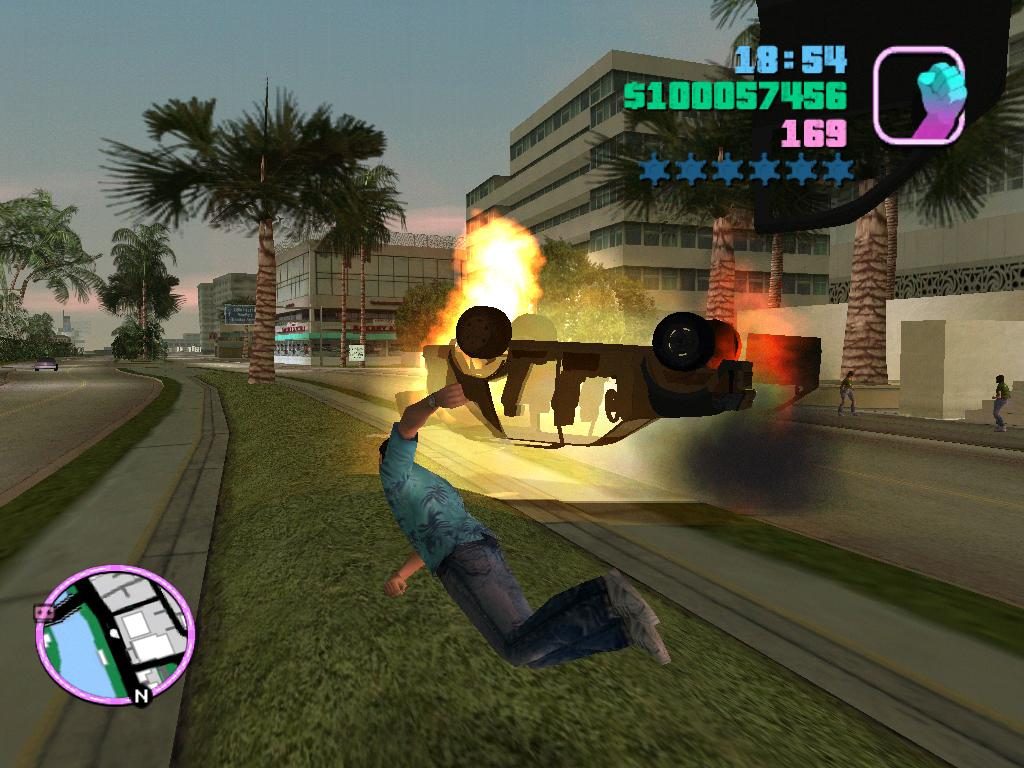 (I pressed the run screaming from the car part of the screen!)

The characters are all pretty well defined, well, as well defined as a bunch of psychotic murderers can be, but hey, this is a GTA game, what where you expecting, 12 angry men? Tommy Vercetti is a very vocal man and a terrifying force of nature, whether it’s in cutscenes or on a rampage he is always a fun character to play, he also happens to be voiced by Ray Liotta, the murdering gangster from “Goodfellas” as well as everything else he’s in, (typecast even in video games).

The rest of the characters who turn up are voiced by a surprising number of celebrities, for example Tom Sizemore (Saving Private Ryan) as the mob boss Sonny, Danny Dyer (Mean Machine) as Kent Paul, Danny Trejo (apparently the only Hispanic actor in Hollywood) as the Cuban Gang Leader. Each character is given depth and personality and I must admit it’s nice to see these well-respected actors give it their all in a different media, too many so called “real actors” phone it in (I’m looking at you Peter Dinklage). 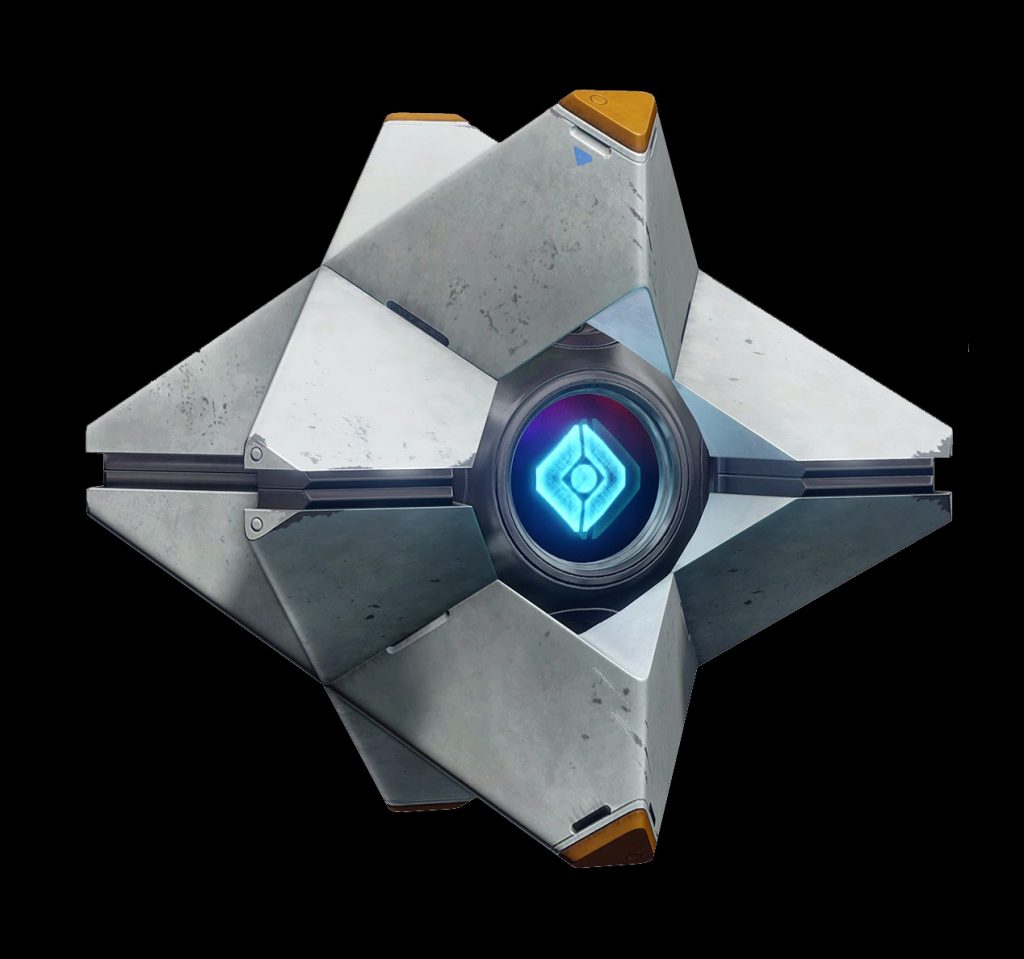 And while you may never actually meet them, the characters on the in-game radio stations are fantastic and always entertaining, with great presenters like Maurice Chavez and Lazlow or Amy Sheckenhausen, have the player stop trying to complete missions and have them instead cruising the streets listening to fictional talk radio, stopping only to beat a hooker with a baseball bat for some spending money. I love how much time and effort has gone into these characters, oh and lest we forget their guests, such as the norse god Thor selling self-help tapes or Gethesemansee Starhawk Moonmaker, a self-named cult member in favour of nature, a war with machines before they enslave us and being non-violent. 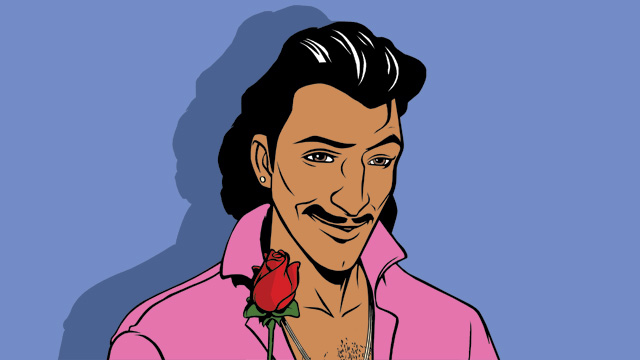 (Fernando Martinez, the man, the myth, the legend)

I have played this game a lot, whether it’s been on PS2, PS3, Galaxy Note or iPhone SE, and I have to admit, it looks better on mobiles. The mobile versions afford the player a level of graphical control that simply isn’t present for the PS3 & PS4. You also have the addition of hands in the mobile version, as opposed to those weird blocks with lines they had in the original, always a bonus when you can picture the characters flipping each other off. So, it is nice to see a slight graphical improvement.

I absolutely loved the music in this game, the Soundtrack is one that changed my life and introduced me to so many classic songs, however it now has the added bonus on iOS and Android of letting you play your own music, giving you the option for even more awesome tunes. It’s the same great game in the palm of your hand, despite a few awkward controls it’s well worth picking up on your mobile if you can. It’s perfect for killing time and has a lot of quick missions, ideal for playing when you are on a 15-minute break or bus journey and want people to stay the hell away from you, but don’t be surprised if you end up binge playing it at home as well.