Hiiiiii Hooooo and away we go to the underground to escape the struggles of the surface, and to make weapons of mild destruction. Ever wondered what it was like for a dwarf besides the glimpses of CGI structures in movies, and how they were built in the first place? You ever look at the height of their magnificence in awe, created by a sturdy race no taller than a ten-year-old? All they needed was a pickaxe, some elbow grease and strong work ethic with a precariously worded employment contract with some very fine print on the hazards.

Ok, so there is no actual contract to speak of, but I imagine it would be a very one-sided document. Hammerting is brought to us by the same publishers of the famous Worms series, Team 17, and is already recognizable with a similar core design. This new game is a mining sim, with some additional elements from the RPG genre such as stat management and requires the player to manage a team of miners to fulfil requests.

As the story goes, there is currently a war above world, and as we all know every war needs love amongst enemies. The best way to deliver that love is with a sword to the chest, or an axe to the face, whatever you think will get that message across best. To get these weapons in hand we need the skilful craftmanship of a team of dedicated miners, artisans and hairy little men and women. At first there are only a few dwarves, very few resources and no place of operations, but that’s where we come in. Many empires began as small lemonade stands, meeting the demands of thirsty customers, only to grow and become tax-avoiding fuckwits, but they are mega rich tax-avoiding fuckwits. Even if you’re against war profiteering you can always salve that injured thought by convincing yourself that you’re only helping to end the war sooner by making it easier for your customers to kill their enemies. Starting small it’s up to the player to direct the dwarves and slowly build your base by mining the raw materials and placing the commands for your squad to get moving. The dwarves aren’t directly player controlled, like the Worms would have been, but they will navigate through their assignments like good employees and earn themselves some XP once they’re completed. Once they have a base then in come the requests from your friends with few benefits, many of which are standard and much of what is needed is close by to begin with. With greater growth, also comes with tougher requests, and the materials needed for these special orders can only be found deeper into the mountain the dwarves have made their home. 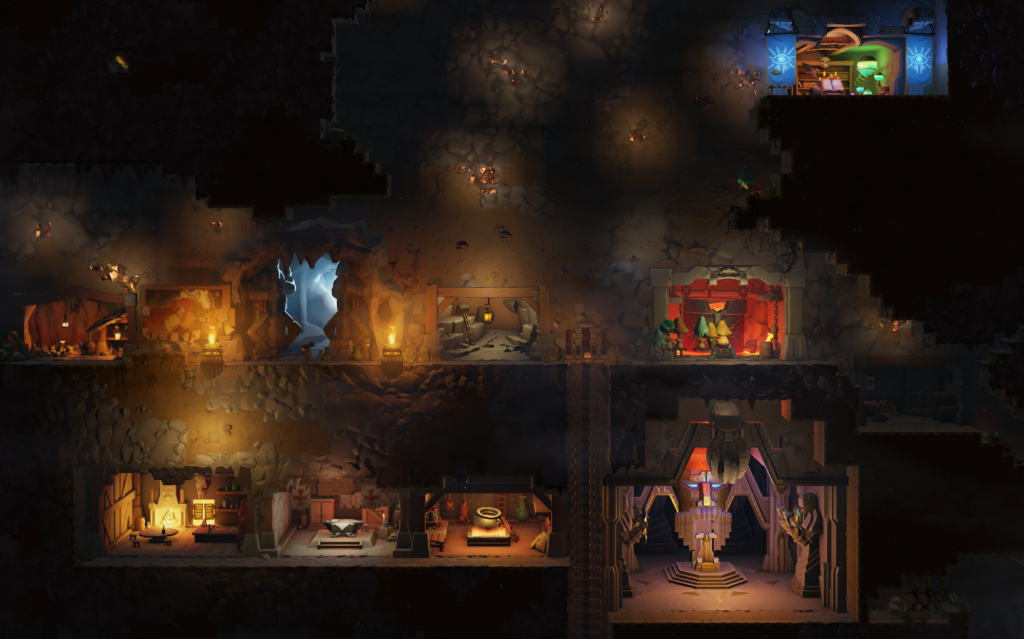 Attempting to gather the better minerals is much riskier, and the dangers evermore present. Luckily, it’s not impossible and with a suitable team there are ways to move around without having to pay compensation for work-place deaths to their next of kin (not a feature as far as I’m aware but not a bad idea either). Construction isn’t limited to weaponry, but your base also needs to be expanded, and with additional/improved technology to manage the quality of special requests. Building tracks, elevators and so on will improve the efficiency of transporting of materials, allowing them to be delivered sooner for the smithing to continue, but it also requires space, and finding the right areas to excavate and they need to be made safe with structures and with careful planning. (I can’t remember how I got here…)

There are different biomes throughout the game, each one being visually unique, and my most common encounter were fucking lava caves. LAVA. CAVES. EVERYWHERE. Perhaps it was my poor navigation skills, lack of a sense of direction, and that poor child-like idea that if I dug deep enough, I would come out the other side of the world. In fairness, the greatest treasures and rarest minerals are found in some of the more hazardous environments and will put you well ahead in terms of quality. But, they’re a massive risk because of how volatile they can be, and the environments are not the only danger down below, and I’m not referring to Balrogs (thank fuck). These creatures can be fought off, but combat isn’t the focus and is best avoided. Special materials are normally needed for special requests and being a fantasy arms dealer, you can choose which faction you want to sell to, so it’s not just your mates you’re helping, but anyone that’s willing to pay. There is an overview map for you to see how the wars are going on, so you can use that to your advantage when auctioning the goods. Speaking of maps, the areas are dimly lit by the lights of your lanterns, but the atmosphere never changes. It’s kind of eerie, but somewhat comforting to look at too. There is something kind of peaceful in watching this ant farm of workers, chipping away at the earth, and with everyone kept busy you can zoom out and keep both eyes on the action. Each member of your team has their own personality traits that act more than just some description in a character menu, but they play active roles in shaping the dwarves into the little fuckers that they are. They are big on their ancestry and lineage, and many other factors come into play about how effective they can be. One of my dwarves, was introverted and afraid of the dark. So, in order to get the best results from his mining, which he was good at, was to ensure that he worked in solitude and in well lit area. Putting each dwarf in the ideal position rewards you with greater success, and the true is for the opposite. You’re not just a foreman, but you’re also Human (Dwarf?) Resources. I loved this feature, because their traits and skills contribute into defining each of them and make their behaviours more organic and they weren’t just a name and a hairy face. (So much better looking than what I put together.)

Despite the loveable graphics and characters, and the exceptionally cool concept of running a weapons dealership underground, there is a lack of content that to keep someone playing this for long hours. The game is an Early-Access title, so there is time yet for expanding on what we’ve got so far, but the price is a poor reflection of that. For what it’s being charged at, I would have expected more on offer, and it’s hard to invest in something that follows the same trend with other Steam games. Which is releasing a game before completion to update it as it goes along before announcing a full release, to get buyers, feedback from players and money to continue working on patches. It’s not my preferred system, especially on smaller, indie games, but it’s downer to have to wait. The UI, looking very cool at old-school, also lacks a lot of information I might need. I need to keep in mind the projects currently worked on, and I can barely manage to plan my afternoon. A journal or something would improve the tracking of my progress, to keep logs on what is completed, being currently worked on and what will be coming next. On top of that, it would be such a big help to have the means to stack orders, just so that I have less micromanaging to do and can keep an eye on everyone when some are spread out. There are a lot of quality of life improvements to be made and keeping in mind the Early-Access status I would expect a lot of them to come into place eventually. It’s a very good-looking game, an enjoyable concept, and has some fun characters with individual personalities. There isn’t a lot of content for long term play, so eventually it will get repetitive, and for the price it’s at I want there to be more added along with the patches, otherwise it’s a questionable decision. There is a gem, hidden under some of the rubble, but it’ll take some extra work and avoiding lava caves to pull out its full potential. I liked the effect the character personalities had on stats and performance, and the surprisingly detailed environments. They portrayed the right atmosphere and in time there should be some extra quality of life improvements that will hope this into a complete title.