So, did I crap myself after walking to the bus stop in the dark after being mentally ravaged by an insanely evil Ronald McDonald? Well, read further to find out muahahahahahaaaaaa.

No, I didn’t crap myself but please read on anyway. Much of the story we already know because this is classed as a remake from the original IT that was released in 1990. What I do love about the remake is that the movie was separated into two chapters. I can understand that many people watching the first chapter would always be drawing comparisons, and who wouldn’t?

I typically don’t like remakes because as the saying goes “if it ain’t broke, don’t fix it”. There was no reason to remake it, I never heard anyone ask for it and yet here we are with the finale and I am so glad they done it. Making it into two stories has done this movie duology wonders. I loved the original, and still do, but taking it in a different approach allows the direction to focus more on both generations and gives us more time to bond with the characters. The original was very long and took dedication to watch until the end whereas now we can watch each one as an almost solo movie that ties in very neatly with the other. The characters were more fleshed out and it avoided the continuous going back and forth between each generation. 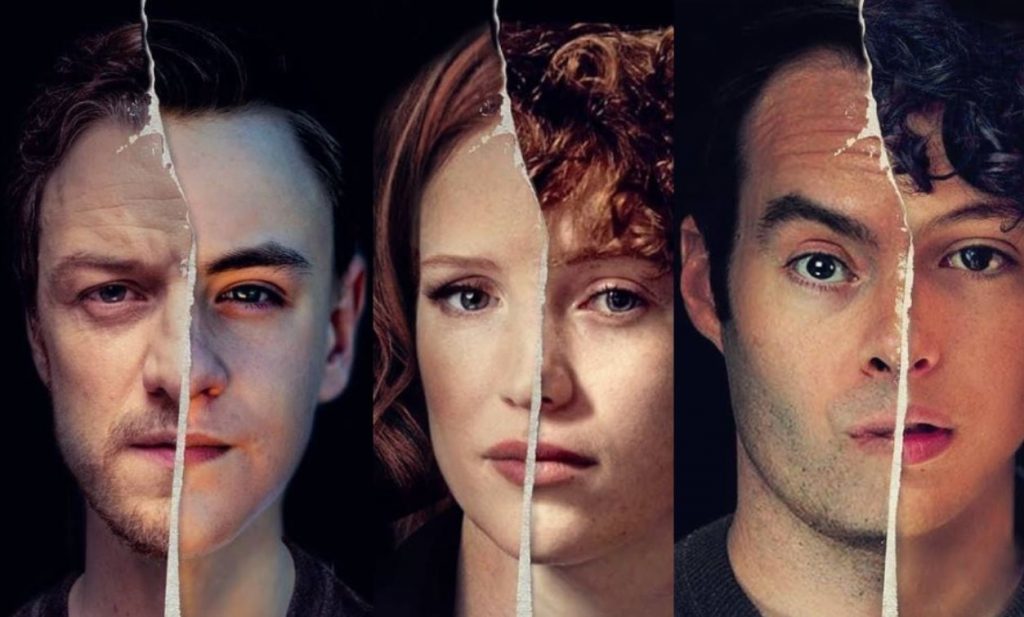 Taking place 27 years after the kids, known as the Losers Club, conquered their fears and united to take down the clown that threatened to make each of them into happy meals, I got to see the return of Pennywise because he arrives exactly on schedule. Whoever thought a supernatural creature would be so efficient with time management? Anyway, after some local kids go missing the Losers Club, now adults, are contacted by Mike (Isaiah Mustafa) and asked to come back to Derry to finish the job, just as they all promised 27 years earlier as kids. Sure, what can go wrong? They are adults now, so they won’t be as scared as they were. Wrong. Almost right away we can see these men and woman, having forgotten the traumatic events of their past, have physical reactions at their summons by the only member of the group that chose to stay behind and keep a vigil over the fictional town of Derry (not to be confused with a real city in Northern Ireland).

You can’t blame them for reacting so poorly, I mean if you were being chased by a creepy guy in make-up that could shape shift into your worst nightmares and continually threw balloons at you, I would imagine it could drive most people insane. Pennywise is back with a vengeance and has made it his mission to devour the Losers Club and remind them why they left Derry behind. 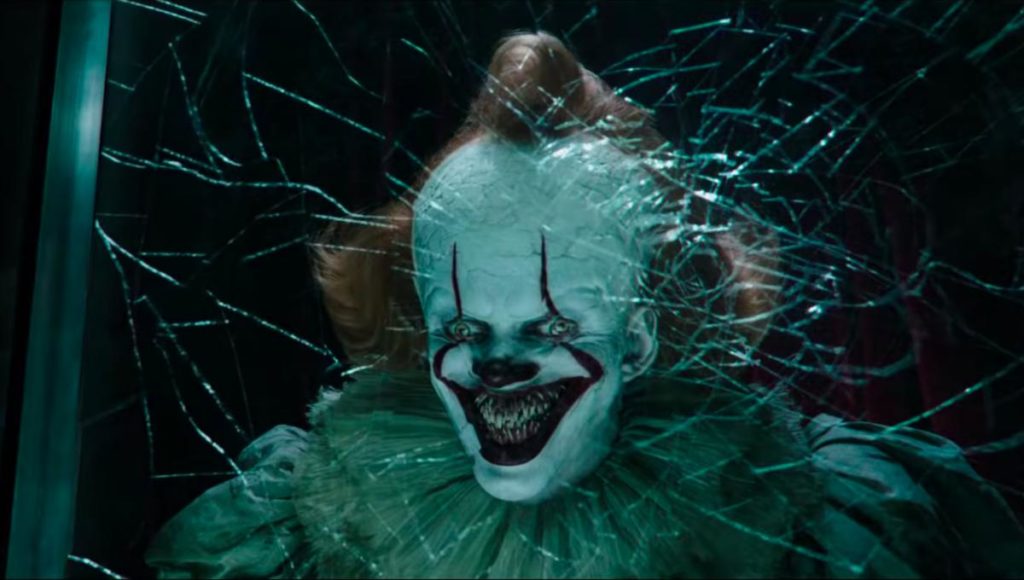 There are still flashbacks to the first chapter, helping anyone that hasn’t seen the first movie in a while but also revealing how the adult characters resemble the younger cast so much, not just in appearance but also in personality. After returning to Derry it’s almost as if they have become those kids again and need to find the courage that allowed them to take on IT in order to finish the job. They have no trouble in catching up with each other and picking up where they left off, but find it hard to come to terms with these events not only resurfacing in their memories, but how the cycle is repeating  and having to face up to what they truly fear.

Mike becomes the font of knowledge, having studied everything about Pennywise for 27 years, and tries to keep Billy (James McAvoy), Beverley (Jessica Chastain), Ben (Jay Ryan), Eddie (James Ransone) and Richie (Bill Hader) together in order to remain strong. As a unit they try to each face what haunts them before going back to where it all began to end this clown’s career once and for all. But it isn’t as simple as that. They had all but forgotten what happened to them and as their memories return, they begin to regret their decisions in coming back and find it difficult to commit to their earlier oaths. 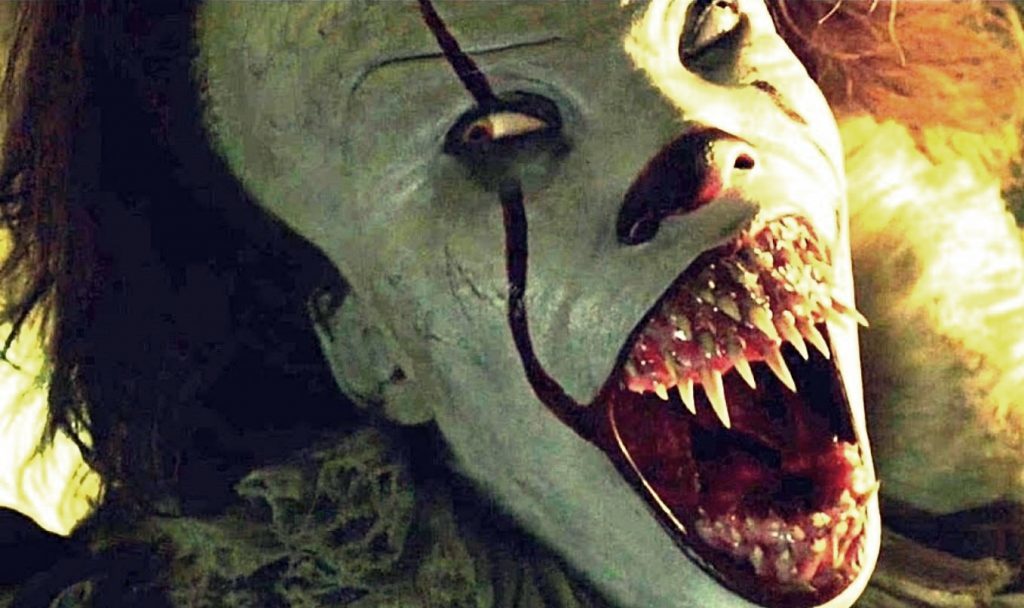 This movie was gory and a pleasure to watch. It didn’t shy away from violent scenes and never held back on trying to cause my heart to skip a few beats but as an avid horror fan I was not scared. I could tell when the movie was ready to spook people because it fell trap to the usual signs but at the same time it was so visually well done and creative in how it scared the cast that I couldn’t be disappointed. There were plenty of shrieks and screams in the packed cinema, with the occasional “hiding behind the hands” because as we all know; if you can’t see the monster, the monster can’t see you. What I didn’t expect was this movie to be so damn funny. I could understand that the first was set from the perspective of a group of kids, so swearing and reacting in strange ways could be viewed as comical but this second chapter had me in stitches throughout. I was surrounded by a group of like-minded hyenas, maniacally laughing during our day out together.

One of my favourite bits in the movie was the scene revealed in the trailer, with Beverley visiting her childhood home which is now inhabited by an old lady. It was meant to be tense, scary and downright creepy. It was all that for most people, but I just sat there chuckling away like a madman. For me, this is not a bad thing. I would have preferred more serious scares, but this isn’t just a horror movie, it’s a story. 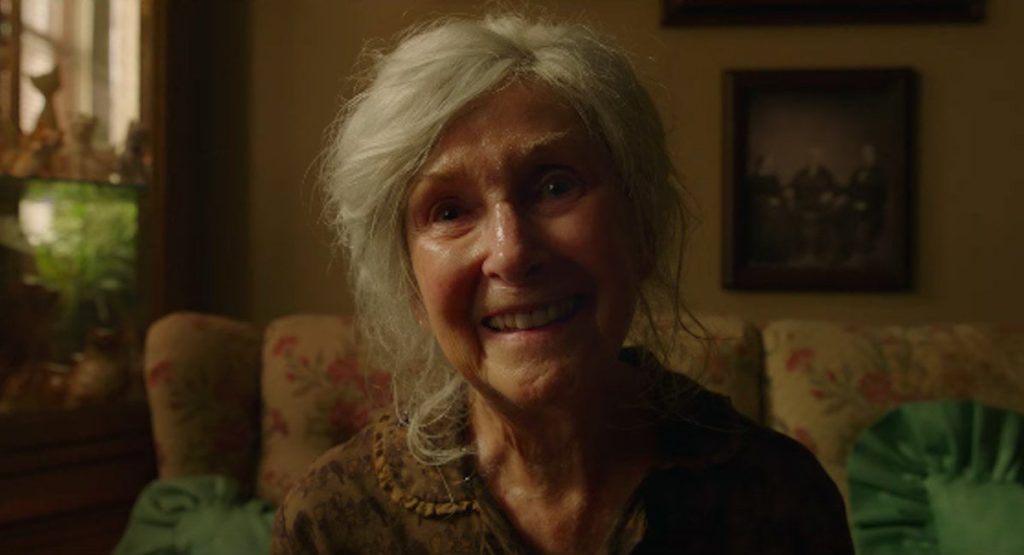 (“Why Grandma, what a vacant stare you have”)

The cast, both younger and older, were phenomenal. They each captured the right mood and delivered their scenes with excellence. James McAvoy as Billy, who held the audience in the palm of his hand every time a scene was dedicated to him, led the cast with a quality performance. That’s not to say any of the others shouldn’t receive equal praise, everyone performed very well but for me he really added the icing to the cake. There are many scenes that, although I didn’t flinch, I know would make my eyes pop out if they happened to me, so much so that I would hide behind my hands to stay safe. 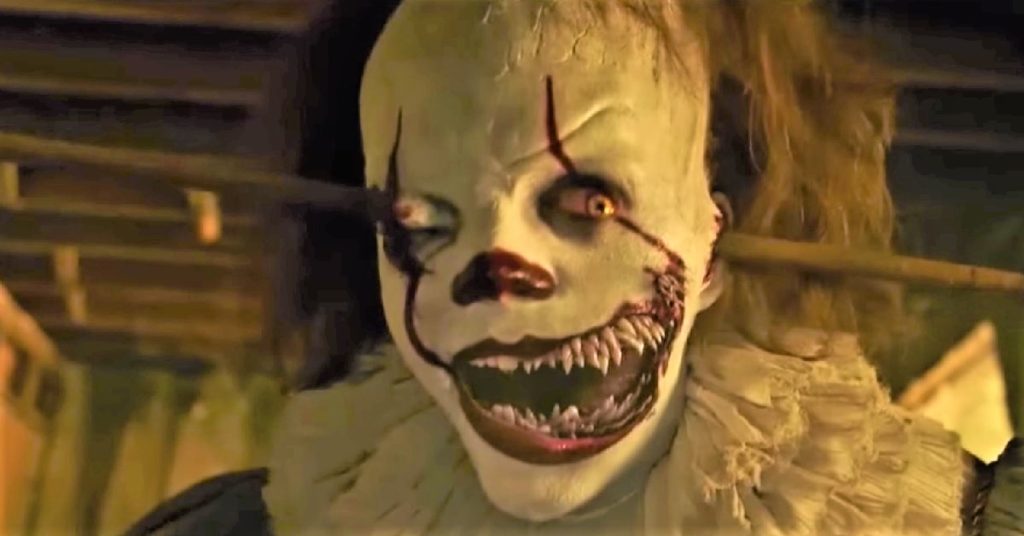 The comedy was gold, and nothing was as rib-tickling as the dialogue between Eddie and Richie. Besides the humour you can see the bond these people have had and how they re-forge this bond as the movie moves along. They have real reactions and emotions and never really get over what happens to them. Too often do horror movies have people suddenly become fearless heroes taking on the bad guy, but even as grown ups these losers shit themselves, second guess their decisions, even second guess their memories of the past and consider abandoning the group for self-preservation. On more than one occasion they back out but come back in order to find some closure and because they know they are stronger together. It was beautifully well written and pays great homage to the source material written by Stephen King.

And of course there was Pennywise, the combination of Joker and Scarecrow and the personification of creepy. I like his look, the shapes he takes, how he speaks and the weird way in whish he smiles. He stands out from Tim Curry’s magnificent version and isn’t just a carbon copy riding on the success of another actor. I can’t say which one puts a greater chill up my spine, but I can gladly say I enjoyed both interpretations, both reminiscent of a Krusty the Clown gone postal. 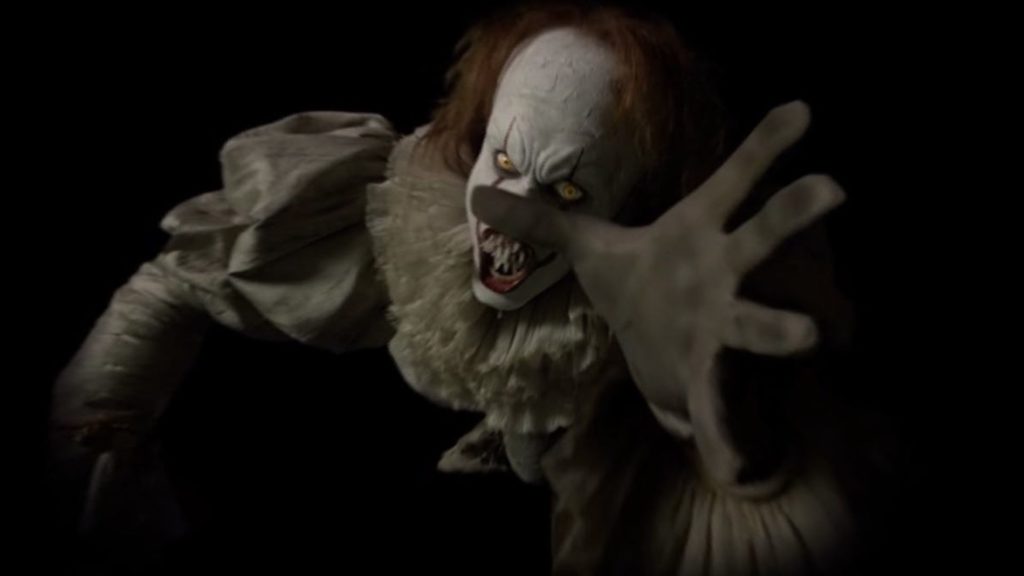 If it isn’t obvious by now, I can tell you that I really enjoyed this movie. It went at a pace that kept me gripped from start to finish and didn’t end with me wanting more, it gave me just enough to remain wholly satisfied, ending the story just rightly. There were plenty of memorable scenes, references to the first chapter, great acting and amazing laughs. I would have wished for less predictable jump scenes, but I can live with what I have got without expecting another remake. All-in-all I would recommend this movie without hesitation.