The Dark Souls of the late 80s/early 90s, the first game that I would rage quit on, and the one that hardened my hands (because of all the floor punching). Ghouls ‘n Ghosts is a side-scrolling horror game that puts you in the middle of a frying pan, and wants you to jump your way out into the fire.

This was one of the earliest games I have played on my Sega Mega Drive console, and is still one of the most difficult games I’ve had the pleasure of playing. Despite my young age at the time, I loved jumping into the 2D medieval realm filled with all kinds of monsters, and would ceaselessly battle my way through each level. The further you progress through the game, the more disastrous things become. 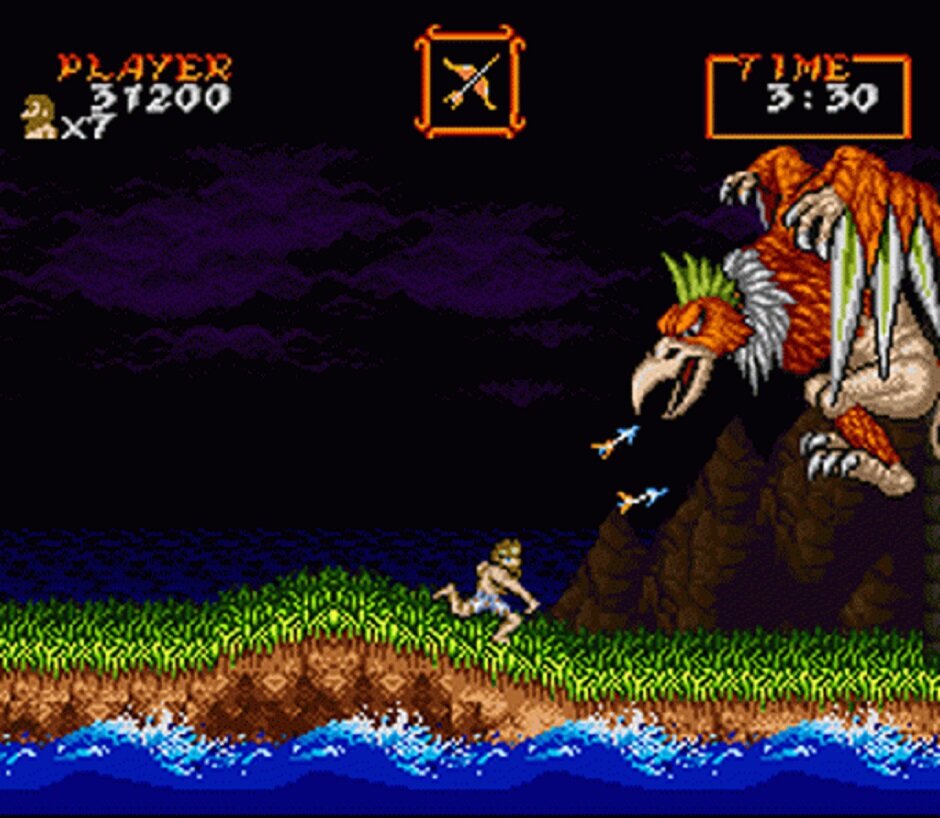 (“Gimmie back my metal pants!”)

There are 6 levels in total, and each of them are filled with a lot of patrolling enemies, with some that pop out of nowhere to take you out by surprise, and at the end is an even more terrifying boss (the boss of the first level is my most hated). They can sometimes be relentless, and will come at you from above, below, at the side, and if you’re too slow you will get wrecked so you need to take your time and learn how each of them will move, or you can run and scream and just pray for the best. Some enemies attack you directly, some walk right up to you, some bounce and some of them can fly. It can resemble a frightening maze of swords, skulls and fire, where just moving and jumping at the right time will keep you safe. 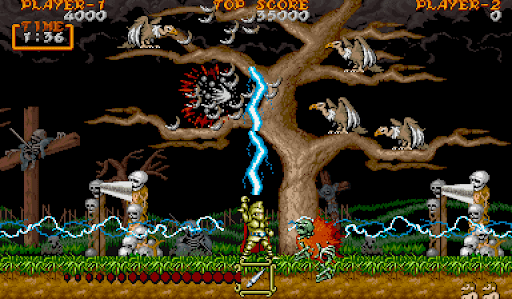 The gameplay is like a typical 2D, arcade, platform side-scroller, and is filled with a lot of hazards. Each level is unique, and it’s almost impossible to get through any of them without dying over and over again. If the enemies and bosses weren’t bad enough, you also have to deal with lava, pits, traps and a lot of floating things that can annihilate you quicker than I would annihilate a cup of tea, and I fucking love tea. There are some upgrades that can help, so you aren’t without the means to fight back. 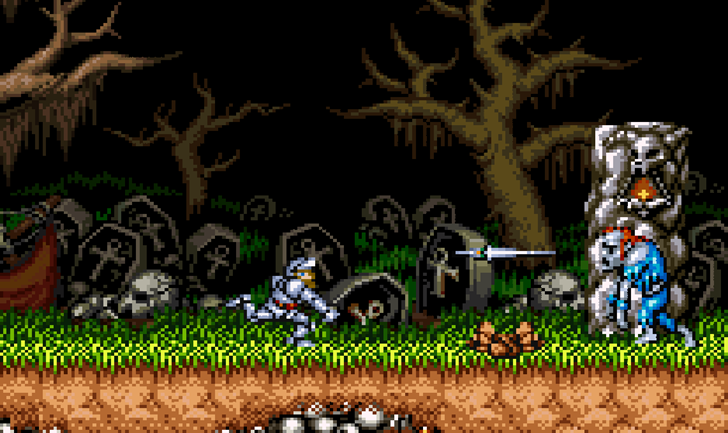 Throughout every level are some treasure chests that house some nice, and sometimes nasty, surprises. If you’re lucky you will get yourself some nice armour, and ranged weaponry. You already start with a suit of armour but one swipe, or even just close contact, from an enemy grunt is enough to make your armour fall off, leaving you in your undies. One more hit will end you, so it’s wise to get yourself covered with special armour that will give you an extra chance to wander through hell. There are a few different weapons you can pick up, but that means discarding the one you have. They each have a special ability that will usually be the difference between living or losing your armour, but the best of them are ranged. Having thrown weapons gives the advantage of staying back from those scary fuckers when they’re throwing skulls or farting fireballs at you, and even better is the advantage of throwing your lances/daggers above you to hit the flying shits, or below you if you’re in mid-air. 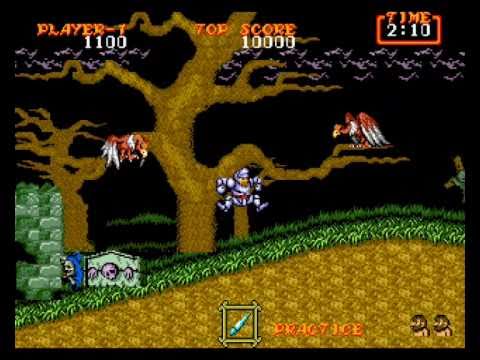 The different tunes playing are actually quite uplifting, a little out of place when compared to the horrific backgrounds, but still satisfying to hear because this is still a somewhat comical game. The story is just a medieval Super Mario script, with a princess that has been abducted by the big bad so you have to have to wade through all kinds of shit in order to beat him up and save the girl. 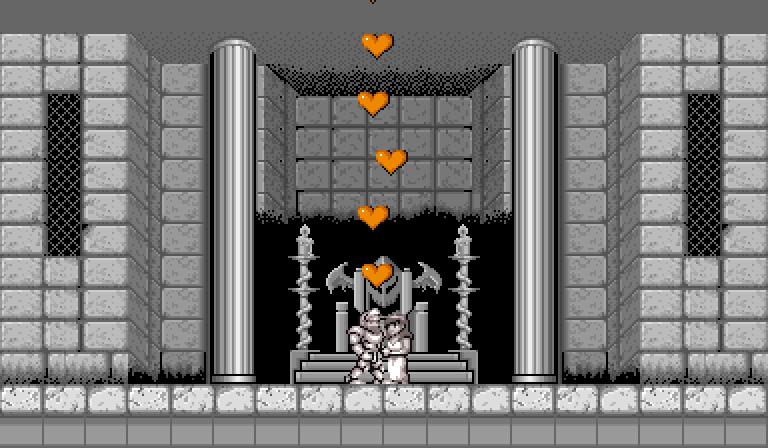 Once you get close enough to the end you get tasked with doing it all over again, in order to get a special weapon that is supposed to make it easier to defeat the main enemy. My problem with that is that this is as far as I managed to get. It took all of my child-like mental energy to just make it to the end of the fifth level, so I was broken when some text appeared to inform me that I will be making a second trip into the depths of despair, at which point I just turned the whole thing off. To this day I have never fully completed the game, but I have a lot of good memories that I can look back on. If I wanted to, I could just buy the Sega Mega Drive classics for PS4 and try again, but the more recent generations have been too easy by comparison so I don’t think I could do it anymore. 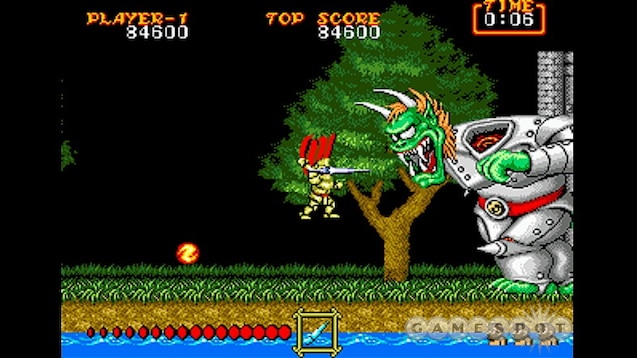 I love the background of each level, the macabre feel of each encounter, the variety of enemies and the challenge it all brings together. It definitely was the game that inspired the Dark Souls franchise, at least that’s what I would assume, and even just getting through it once is enough to make you a god among nerds. It’s a childhood experience of mine that I won’t forget, and it’s what came to mind when I played Dark Souls for the first time, so I would pursue some games that have a reputation for being difficult. It’s not a very long game, but with the number of times death comes knocking, even at the early stages, just getting to the next level feels like a journey on its own.