I spent about 3 days of down time reorganising my mod load order, which includes hours of tutorial videos, messages from online friends and a lot of trial and error, to make my 300+ mods play nicely together. I’m someone that goes mod shopping before even starting my game, always hunting for something new, something I don’t even need, and I’m not sure that I even want, just for the sake of having more shit to play around with. 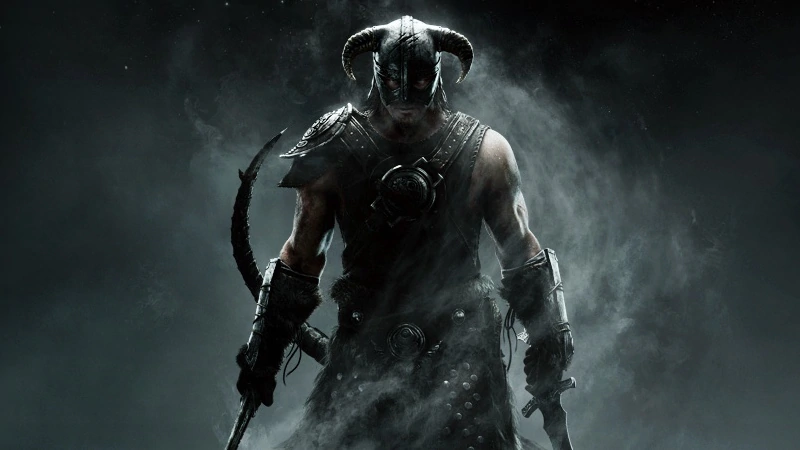 After finally learning how to use so many different modding tools, instead of just winging it with a simple patch, I’ve now managed to give myself an almost unrecognisable game from vanilla Skyrim. I could be here for days showcasing mods I believe will make the game bigger, better, and more enjoyable, and to try and choose a few from my list was almost impossible to manage. However, I have decided on a few mods I believe everyone would get a kick out of. They are not necessarily the BEST mods, or my favourite, rather they are a selection of mods that add either a ton of content, quality of life changes or something unique. A few required other mods to be installed first, many patches for compatibility, and a lot of manual work, but overall, they made Skyrim a more interesting place to visit. In no particular order, please see them below. 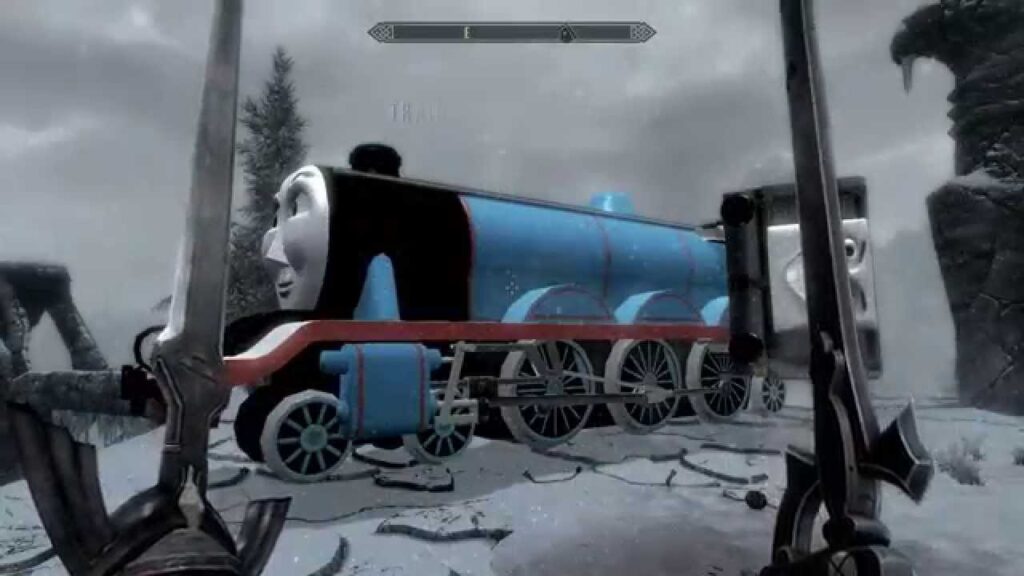 Skyrim’s perks idea was a nice touch, being able to see your skill progression within the stars, and the different enhancements you could unlock by working on your preferred build, also known as the stealth archer. But within the Skyrim perk system lay its greatest weakness. It was bland as fuck. Most perks were just some unseen stat changes, something you wouldn’t care much about, and they were just so basic. Ordinator takes over the reigns by fleshing out the perk system with hundreds of additional perks, and making changes to existing ones, allowing you to really make a build to enjoy, and not just a stealth archer. Do you want to be a necromancer, putting together a skeleton army you created? Well now you can. Are you a combat mage that likes to use spells and sorcery to dominate the battlefield? Well now you can, with perks that allow you to be raised into the air by a column of earth, keeping you out of harms way as you cast your destructive magic. What about a heavily armoured tank, that fights on the front lines ahead of his comrades? You can do that too, with perks that grant you plenty of new abilities and effects, such as enemies being knocked over from power attacking you, or those that retreat in fear when you walk slowly towards them. This mod is an instant must have, and makes Skyrim feel like a real RPG again.

The Elder Scrolls 4 remains my favourite game of all time, with plenty of unique locations, including the different cities and guilds. Now, Beyond Skyrim lets you move further south from a guarded gate and walk down memory lane in the northern most county of Bruma. Revisit the city of Bruma and its surrounding lands, roughly the size of a Skyrim hold, but filled with new characters (all voiced), quests, dungeons, creatures, and items. The team behind this have carefully crafted an exact replica from the 4th game, which includes places like Cloud Ruler Temple (in ruins to match the lore), Frostcrag Spire from the DLC and so much more. I shed a little tear as I wandered around northern Cyrodiil, wiping out goblins, ogres and minotaurs for doing nothing else other than existing in my way, before diving into a huge Ayleid ruin and coming back up about 100 times richer. It’s a large mod, and feels like a developer made DLC, but with less bugs, but it’s very lore friendly and acts as another region of the game to visit, any time you need a break from Skyrim or Solstheim.

Exactly what it says on the tin, but since it offers no actual description on said tin, I’ll just tell you what it means. Sometimes you like to learn a bit of destruction magic, and why not, shooting colours at someone until they die has its moments, but with your fire being about as hot and dangerous as anime fire you don’t really get to feel like a powerfully destruction magician. Well, with FEC, your dreams will come true, and then some. FEC will add in new character effects when killed by magic, and the effects are determined by the type of harmful spell used, and its intensity. As someone with multiple magic mods to add in hundreds of spells, and as a battlemage character, I have a lot of ways to burn people to a crisp. Using a fire spell on someone to kill them will see them set on fire, burning their clothes off, and leaving a charred body behind, with a stronger spell they’ll burn until there are bones left behind something even more potent leaves some burnt ashes and smoke. A shock spell will have them spazzing about with a visible skeleton underneath the flesh, and may even melt them into goo, or leave them with visibly burnt nerves. I love the frost effect too, as enemies freeze in place, or they explode into small shards and chunks of ice. One of the most interesting are drain spells, which leave behind a wizened corpse, having aged rapidly and their hair gone white. It’s a mod that makes magic have a real affect on an enemy instead of just reducing health, and it doesn’t just stop at death. Walk up to a corpse already there and shoot a fireball at it to set it on fire or destroy your already dead enemies to leave nothing but dust behind you, even whack them with a torch to the same effect. 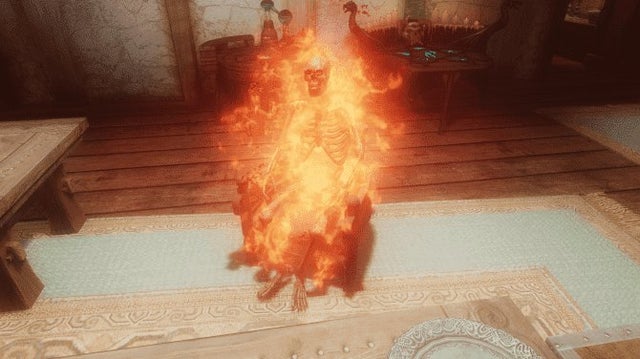 (Just how I felt at work this week)

2. Legacy of the Dragonborn

Arch-Mage of the College, Listener of the Dark Brotherhood, Harbinger of the Companions and the Last Dragonborn, hero of the civil war slayer of dragons, yada yada yada. What is your reward for all of this? Nothing, zilch. LotD is the mod that makes your journeys something to be proud of, by placing a large museum in Solitude dedicated to chronicling everything about you. The museum adds fully voiced characters, hundreds of relics from previous games (including those only mentioned in the games) so that you can display them. You become a relic hunter, helping your Chief Librarian in the excavation of unique items from Tamrielic lore, creating an Explorer’s Society, and watching new displays become visible that show you what you have achieved within different quest lines. You can even create replicas of these items, for your own personal use, so they aren’t just something to look at, but the weapons, armour and jewellery can all be used. You can take part in treasure hunts, or receive donations, or even find items in your own travels that you can bring back to help increase the patronage you will receive as compensation. It’s a huge mod, is lore friendly, and contains a patch pack that detects already installed mods (such as immersive weapons etc.) to better work with already installed content. It adds many hours of fun, as you create a catalogue of lost civilizations, Daedric artifacts and learn the secrets of the museum itself. 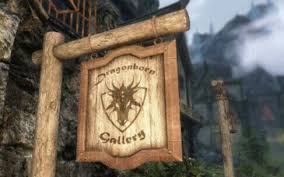 Is it not weird that many of your quests, especially bounties, come directly from a steward, or an innkeeper? I get that a guard would drop a bounty off at a tavern in hopes that some adventurer will take up the offer of work but shouldn’t something like that be on display? Well, with Notice Board such a thing is possible. It’s a relatively small mod, but it adds quite a lot of immersion to improve how bounties are worked, and it also adds additional work for you. Outside of each tavern in any main hold town/city you’ll find two notice boards with sheets of papers nailed to them, representing bounties and letters, with offers of payment for work. Typically, they range from killing a giant, a dragon or bandit leader, but they also include rescuing citizens, delivering materials and some menial stuff. There are patches for mods that alter the layout of towns, but you’ll find this to be very compatible, and with the other mod, Missives, you’ll have another board at a different part of the town which contains timed quests. Most of them are similar, but there are a few differences, but they all offer coin, so if you’re just wanting to save up and get some experience at the same time, both mods work well together in giving you something to do in between main quest lines. Sometimes an adventurer will be standing there, and you can tag along with them to share the risk, and the reward. They also add much needed variety, and options as to which quests you want to take on, instead of asking for work and then getting a quest update automatically added to your journal. 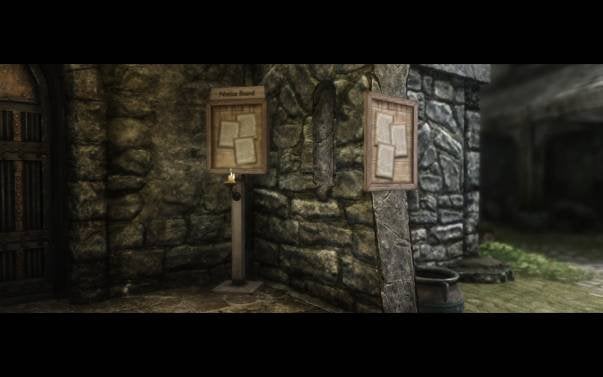 Well, there we have it, 5 different mods that I thought would be a nice addition to your load order, most come with prerequisites that can’t be ignored, but if n eejit like me can manage to install them safely, and get them working together, then any other eejit and above can do the same. Just be sure to read the requirements of each thoroughly, and always make use of a mod organising tool unless otherwise told not to. Also, downloading LOOT (Load Order Optimization Tool) will help sort your load order and highlight mods with problems (and provide some instructions as to what is needed). There are many mods out there though, and I would love to do a bigger list, but I doubt you want to read about 300+ mods.

Well, those are 5 Skyrim Special Edition Mods and why I think they’re worth installing. What are your thoughts? Let us know in the comments below. Also don’t forget to follow us on Twitter, Facebook and subscribe to our YouTube channel and if you’re feeling generous feel free to donate to our Patreon, thanks for reading.