It’s back to this time of the year where the dark denizens of the night roam the streets, mindlessly sucking out the souls of everyone around them, or as we would call it, a typical day in Northern Ireland. Halloween is upon us, and along with the spooky themes of pumpkins, witches, ghosts and Arlene Foster, there is a nice selection of games that help us get in the mood. That’s what we all do, right? We choose games that fit the atmosphere at different times of the year, almost like the traditional Halloween Specials of The Simpsons. Below you will find a list of games that I have played, that I believe capture the feeling quite well. Not all of them are great standalone games, but they still manage to hit the right notes when it comes to making me nervous.

A surprisingly popular game that can be found on different platforms, that sees a massive spike in activity at this time of year, but still busy enough for matchmaking any other time. This is horror personified, and has players taking different roles, either as the killer, or one of the survivors. The survivors are tasked with escaping the areas that they spawn in but can only do so by turning on very loud generators, that will help power the large gate that signals their freedom. Sounds easy, in theory, until you come across the ever-walking killer that wants to disembowel you for the sheer pleasure. The environments are standard, with some obvious hiding spots that we all know are hiding spots, some doors that can be closed and barricades that can be used to fend of pursuers. The killer has multiple character choices, each with a unique backstory and abilities (wraith forever) and needs to give chase and attack a survivor to put them in a wounded state. They can be used as bait to lure others to save them, or they can be attacked again to have them crawling, where they can be picked up and placed on a large inter-dimensional spike that will eventually claim their soul. The survivors can choose to risk saving them or use it as a distraction to go ahead and haul ass. There is not a lot of variety in terms of gameplay, the mechanics are very barebones, and the controls are stiffer than a Stormont MLA, but for a small game with friends it makes for a good laugh, and a good scare when the chase happens. The killers themselves are freaky fuckers, but they make for good hunting. Of course, it’s a horror game, or a franchise for that matter, and it contains some of the most vein popping gameplay I have ever come across. Everything that moves, and a lot of things that don’t, can kill you. There are horrible mutations of creatures that come wondering out with the sole intent of ending you. Enemies as lowly as the standard skeleton, the ones we all laugh at, will tear you a new asshole in your forehead if you’re not cautious. There are ghosts, images are other players, dragons, hulking creatures, poisonous lizard things, angry mushrooms that walk and so much more. Your heartbeat is never steady because even the fucking furniture can attack you, so it makes the list quite easily. The architecture is vast, with some medieval gothic vibes, eerie vocals during boss fights (where it is usually silent), and the feeling of loneliness, with bonfires only offering a brief comfort. Each game is worth a play, including Bloodborne and Sekiro, as they offer something a little different but without ever reducing the standard of gameplay. They give you the fright that will you either fight or shite. (If anyone knows the original artist please let us know so we can credit them.) Okay we have a zombie game, after already being bombarded with zombie games. But, were any of them ever able to do it right? Some have, trying to make it a survival game, some tried to add more action into it, but in my opinion, this was the only one that ticked each box, well most of them. Taking place inside a large, but cramped, city is the ultimate game of cat and mouse. Zombies are everywhere, stumbling over things, croaking and moaning and generally being kid of braindead. Pretty much a teenager. They are also aggressive and will come at you in large numbers, with varieties of zombie that each have their own patterns. You have the stereotypical dumbass zombie that just lunges at you persistently, and in larger numbers but you also have larger zombies, and faster zombies, that are more like a new breed of supernatural creature than the typical brain-chugging idiot. (Just so we’re clear we mean the zombies, not the COD players.)

With a day/night cycle the intensity skyrockets at night, with the more dangerous creatures being sensitive UV light, so they appear when the sun sets and will hunt you the fuck down. Even better, the regular zombies are still about, so they can’t be forgotten about. Think Attack on Titan (watch it if you haven’t), and you manage to get used to the standard Titans, and then suddenly a host of abnormals just appear and they have you on their menu. It makes for some exciting chases, and with the smooth parkour system it turns each encounter into a fast-paced chase for your life, until you start levelling up and can take them on with some sound strategy. It’s almost comical sometimes, dropkicking zombies off buildings, chopping them up with electrified weapons, getting into brawls and so on, but it’s fun to do, and there is co-op as well so you can bring some friends into the mix. Dying Light is a sandbox filled with some scary faces, and at the early stages feels like the devil’s playground, but it has enormously heightened my senses to strange noises and I almost feel ready for an actual apocalypse, which is only another 2020 away from happening. 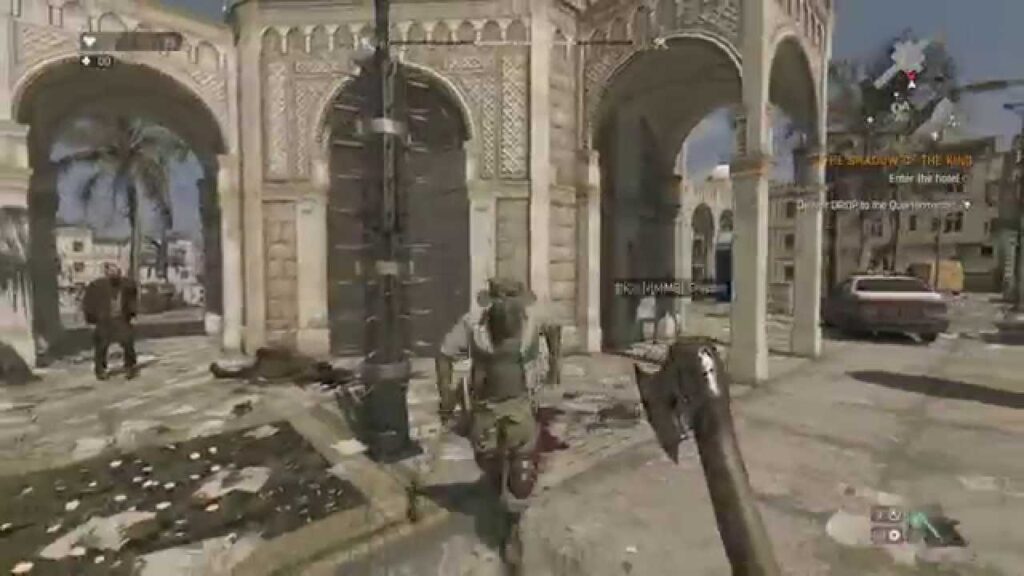 Okay, this one game me some genuine fright, and that says a lot. I was forced to watch horror movies as a kid, and those were movies that were either banned for 20 years or were made by some of the true masters of horror. Imagine a 6-year-old me, with a little less beard, being sat in a dark room with a sociopathic older cousin and made to watch Zombie Flesh Eaters. It was epic, so I watched it more times after that, but only after I had grown a few extra hairs on my chin. By the time I was 8 and my dad let me watch Predator, I was pretty much immune. Outlast had me sweating at the brow, but less to do with jump scares and more to do with great foreshadowing and build-up.Playing as a reporter that decides to investigate the controversies of a shut-down asylum, and then goes to said asylum at night, I know that this guy is a moron. Then again, it’s the build-up to most cheap, American scary movies, so it’s no surprise. It’s dark, it’s raining, and for some reasons there are lights on throughout the grounds and apparently in the building too. This doesn’t seem strange to our hero, but then again, we notice a lot of things they don’t, and we wouldn’t be stupid enough to go there alone at night anyway. There is almost no music, a lot of moving shadows, creaking floorboards, doors opening and closing behind us, lights going off, corpses and messages written in blood. Above all, there is uncertainty, confusion and a lot of panic. The brain gets excited because so much is left to the imagination. We want to figure out what is going on, but we don’t really know what to think, and when you start coming across strange sounds, the feeling of being watched and then seeing the craziness first hand it becomes a complete overload of all systems as the panic sets in, which culminates in the true fear of being caught. You might not know what will happen when you’re caught, and your imagination takes over, so it becomes much worse. Yeah, this done it just right, so it’s a great choice for Halloween, if you dare. (“You are one ugly mother fucker!”) As the name suggests, it’s about vampires, but just spelled differently using “ye olde English”. This is currently free on PS+, so it’s worth adding to your library if you haven’t done so already. We are in the wonderful early 1900s of the different London districts as a newly turned vampire during a plague, more specifically the Spanish Flu, and will need to decide whether to feed and become stronger or keep to the Hippocratic Oath and stay thirsty. As a Doctor you want to try and help people, but in doing so you need to find other ways to progress without spilling any blood, although some fights just can’t be avoided. This game delves deeper into the dark, unbeating heart of a creature of the night, and shows you the difficulties in choosing strength over compassion. As a vampire you have heightened abilities and will traverse the streets of four different districts that can become affected by your choices and actions. It is dialogue-heavy, with pretty dull combat, and not-so-exciting skills, but the voice acting is superb, the story isn’t too bad and the consequences of draining someone dry can weigh heavily. When taking a life with your fangs you share their last thoughts and memories, flashbacks of those they will miss, and you will feel what they say as much as hear it. So, even someone that appears to be a criminal could be leaving behind a starving family, making you regret the choice, unless you do some proper digging into the lives of your victims. The London aesthetic, in those days, is wonderfully drab and depressing, with sickness and discomfort everywhere, but also with the extra sensitivity and awareness to all the supernatural phenomena going on within the shadows. A dark game, and not just for the lack of light, but for walking in the shoes of a monster trying to be a man. There are many other games that are suitable, and many I have left out, but those chosen were part of my recent playlist in the build-up to one of my favourite times of the year. I yearn for a true open-world horror experience, with a variety of all kinds of ghouls, ghosts and nightmarish creatures. Haunted mansions with mysteries to solve, misty lighthouses, abandoned streets, and even an asylum. A smorgasbord of terror to try and avoid, with a multiplayer element of finding areas to hide, pathways to run through, and a means to try and either fight back or escape. For now, I will settle for what we have, as there is a vast selection to choose from. Happy Halloween to everyone, and if you hear a bump in the night, just turn your night-light on and hide under your covers.

Well, those are Jude’s horror picks for Halloween, do you agree? Disagree? Let us know in the comments below. Also don’t forget to follow us on Twitter, Facebook and subscribe to our YouTube channel and if you’re feeling generous feel free to donate to our Patreon, thanks for reading.