Well, I’ve just finished The Last of Us: Part II and I can honestly say I have never had a more miserable gaming experience in my life, but certainly not in the pretentious way Naughty Dog may have intended it to be. Be warned, this review will have spoilers, but it’s been out for quite a while now, so read on at your own risk.

This review isn’t exactly timely and there’s a good reason for that, and no, it’s not because I’m a lazy bastard…well, not just that. Simply put, I didn’t want to continue playing, which for a video game, is a big problem. Normally when I’m playing a game I’m hard pressed to drag myself away from it, hell, even if I don’t particularly like it, I have an “I’ve started, so I’ll finish” approach to video games. But with “The Last of Us: Part II” I needed to take breaks every few hours, once I didn’t go back to it for 3 days. Imagine that, I was having such a dreadful time playing this game that I had to keep forcing myself to go back to it because it was just one wretched experience after another. In fact if it wasn’t my job to review games, I would have given up after my 2nd dog murder, but here we are.

The Last of Us: Part II has quite a few problems; chief among them is the story, which is so depressingly morose that you would think that Joel was the human embodiment of happiness and when he was killed, so too was the feeling of happiness. Set four years after the original, The Last of Us: Part II follows the story of Ellie who is on a quest for revenge against the woman who murdered her surrogate father and the group that helped her do it. Along the way we learn what exactly Joel & Ellie have been doing the past four years and the toll Joel’s lie has taken on their relationship. Of course we only get to play as Ellie for about 50% (and that’s being generous) of the game. The rest of the game we play as Abby, the woman who murdered a beloved series protagonist in such a brutal fashion my testicles have yet to descend, which if nothing else was a ballsy move by Naughty Dog. While playing as Abby we learn why she did what she did and how the consequences of her actions impacted her and her friends. 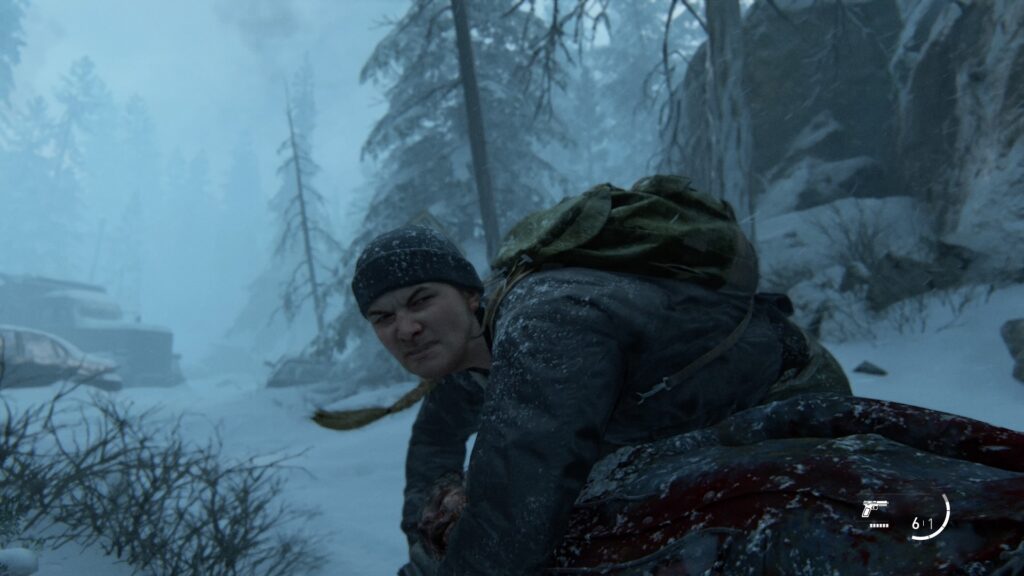 (Apparently her face is stuck that way.)

There is more to the story but honestly, it’s not worth discussing, like I said earlier it’s just one horrible experience after another, characters are shoe horned in to situations whether it makes sense or not just so they can be brutally killed later in hopes it will elicit sadness from the player. They even introduce a dog for us to kill; only to have us build a relationship with said dog in a flash back….WHO DOES THAT?  A well told “sad” story needs to be interspersed with moments of joy and levity to offset the misery, otherwise depressing becomes the norm and then nothing sad affects you.  And there are none, none at all, I finished this game only a few days ago and I can’t for the life of me remember one moment of happiness.

The mediocre story certainly isn’t helped by the god awful pacing, which is, and let’s be diplomatic here, shite. Telling a story from multiple perspectives is a difficult undertaking and has to be done carefully; in this case it was not. Anytime the narrative threaten to become interesting it was like an alarm went off and I was forced to switch characters or hurled backwards in time, bringing the pace to a screeching halt. Once, while playing as Abby, I was forced to endure a flashback within a flashback, and what was the crucial information that I needed a 2nd flashback to experience? Oh, to watch her make moon eyes at a hunky boy, of course. And things like this happened all the time, interesting or suspenseful moments would be held to ransom while the player is obligated to tolerate some boring flashback shit. And when you return to the interesting moment all suspense is lost because of course it fucking is. 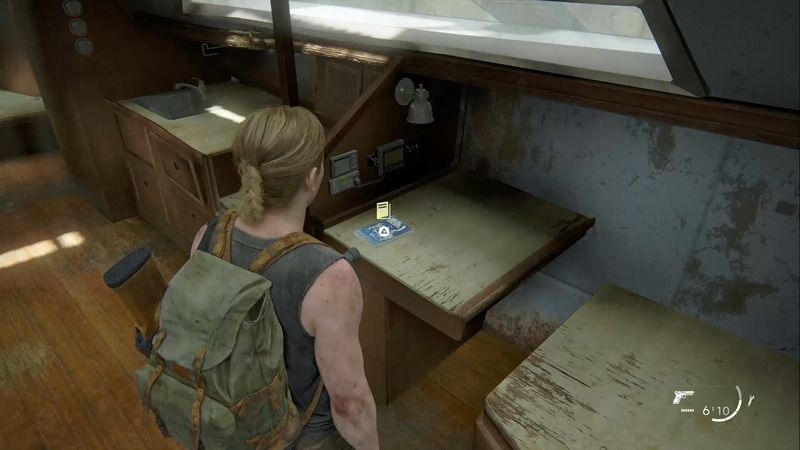 And the worst thing was that such a shite story came at the expense of gameplay, it’s like they were at odds throughout the entire game unable to have one without the other. The original game married its excellent story with its wonderful gameplay; here they are uneasy allies at best. Which is a damn shame because the actually gameplay is fun as hell, especially the combat. 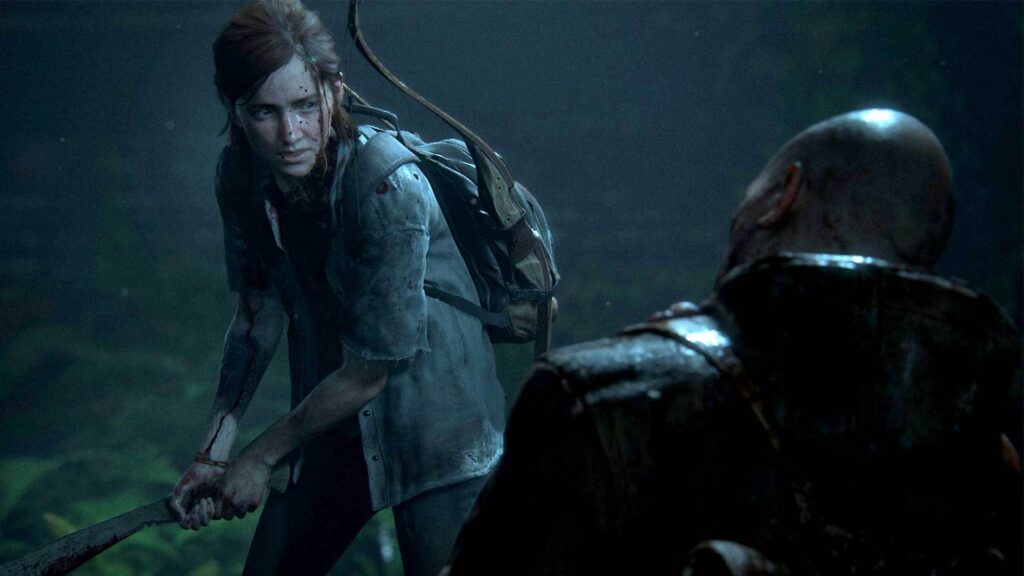 So much so in fact it works against the narrative and overall wanky message of the game, that violence begets violence. But despite Naughty Dogs’ intentions, I was at peak enjoyment when I was blowing up my fellow man with an explosive arrow, not while I was watching Ellie sob at the blood on her hands for the third time. The combat is tight and well-polished, with each encounter feeling fresh and unique thanks to the clever enemy A.I that is constantly switching up its tactics. It makes for some excellent cat and mouse style combat, were one slip up could be the death of you. 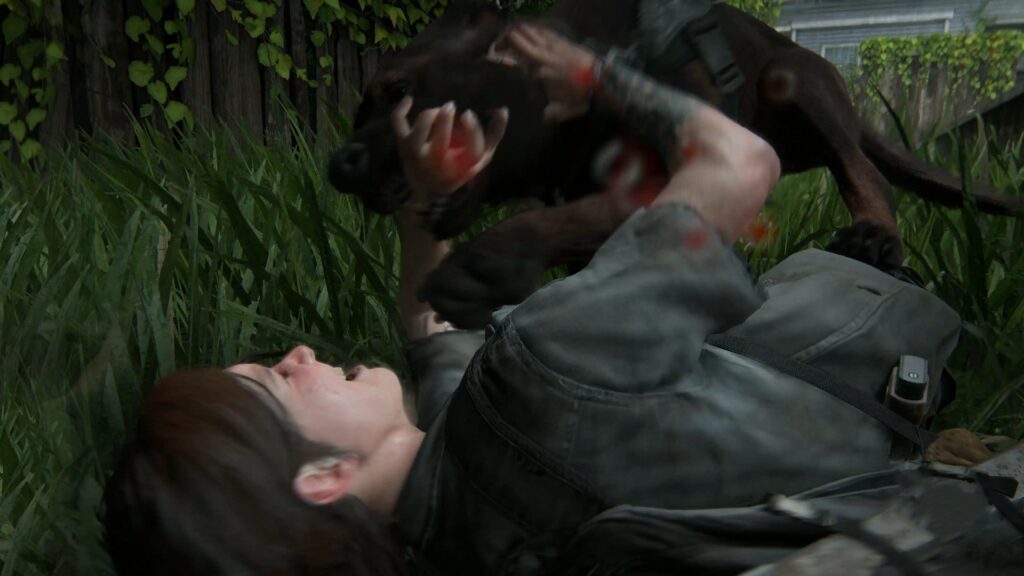 Having said that though, the controls are a complete nightmare, they’re just all over the place. I thought we had moved past this shit, I thought the industry had collectively decided that certain buttons do certain things and that was the standard. I mean honestly, who the fuck puts the run button on L1? And it’s not just button placement, the entire controls system feels clunky and unresponsive, it’s less of an issue when you are simply exploring the world but when you’re in combat it all goes to hell. The left analogue stick moves Ellie around, but pulling straight back doesn’t turn her around, she walks backwards, in theory this is great as it means you can back up slowly without being spotted. In practice however it means you have fuck all idea of what’s walking up behind you with a knife and fork ready to eat your brains! 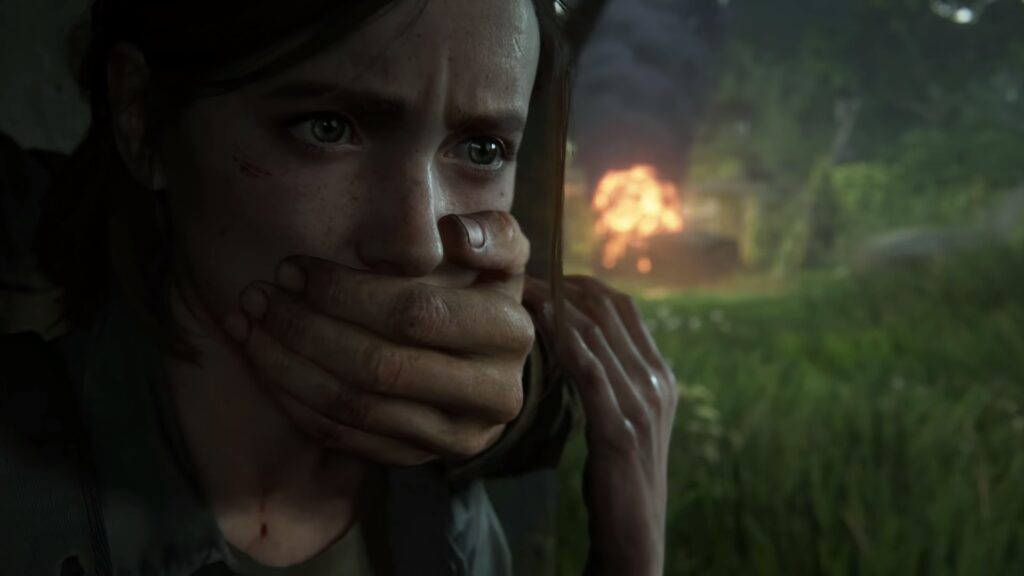 Ellie also has a real problem with how she interacts with her surroundings, I can’t tell you how many times I was left screaming “GET FUCKING DOWN” because Ellie had decided to interoperate my instruction to seek shelter behind cover as “get on top of this piece of cover so the whole world and their dog can see what a twat you are”. And this happened at least 50% of the time, it was infuriating, at one point I let her get shot to death as it was no less than she deserved.

And if you think the shit controls end there you’re an optimist, as the listen function is absolutely borked too. This time around the listen function acts like echo location, meaning you send out one of two pulses, one for enemies and one for items, each on a separate button. Simple enough you might think, but clearly you’ve been taking too many sensible pills captain smarty pants, you see in order to access these abilities you must hold down R1. The problem is if you don’t hold it down long enough for the game to register the command you may accidentally execute a melee attack. And since the only sensible time to search for items/enemies is when you’re in hiding you will most likely accidentally swing your axe and break cover stumbling into an enemy in the process.

My last complaint is one I’ve griped about before in my “Final Fantasy VII: Remake review” and that’s how much of the player’s time is wasted with over-animation. Look, I understand that they’re only a few seconds long but as Crohn’s Disease has lowered my life expectancy I will continue to complain about every second of my time wasted! And when I just want to open a door, climb a ladder or modify a weapon I don’t want to waste time with the same animation over and over again. And considering the borderline abusive crunch that was forced upon the developers in order to achieve it, I don’t think anyone would miss Ellie polishing her handgun. 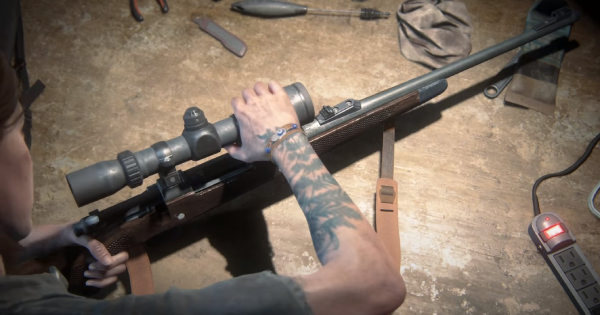 The Last of Us: Part 2 made me sad alright, but not because it evoked that sentiment by telling an emotional story. No, it’s because a wonderful video game like “The Last of Us”, which came out, told its story and ended beautifully has now been retroactively tainted because it is attached to this incoherent mess of a game. If you want my opinion, stay away from this one, despite an admittedly fun combat system there is really nothing to recommend here. A video game in desperate need of peaks and troughs but one that was so preoccupied with forcing one emotion down our throats it fails to be emotional at all.