A good old bout of wrassling is what I had hoped for with WWE 2K17, but is that what was given? Or have Yukes delivered a sweet chin music to the face!

The first thing I noticed from the get go, was how the games have continued moving away from the old Arcade style feeling of previous WWE titles, and into the world of wrestling simulation, trying to capture the feel of WWE as it is today.

For Starters the single player has had a few minor tweaks which have somewhat improved the flow of the matches. While the reversal system, pin/kickout mechanics, stamina management give a more strategic feel and invoke a more realistic situation and bring to life the back and forth of the matches as we see them on TV.

The counters/reversals now come in major and minor, the first of these has the added advantage of dealing damage but at the loss of two stamina bars.  The minor reversals tend to add pace and speed to a match, (albeit with a few drawbacks) and allow the player to get the upper hand without sacrificing too much stamina. These features allow the player to find their own unique play style. 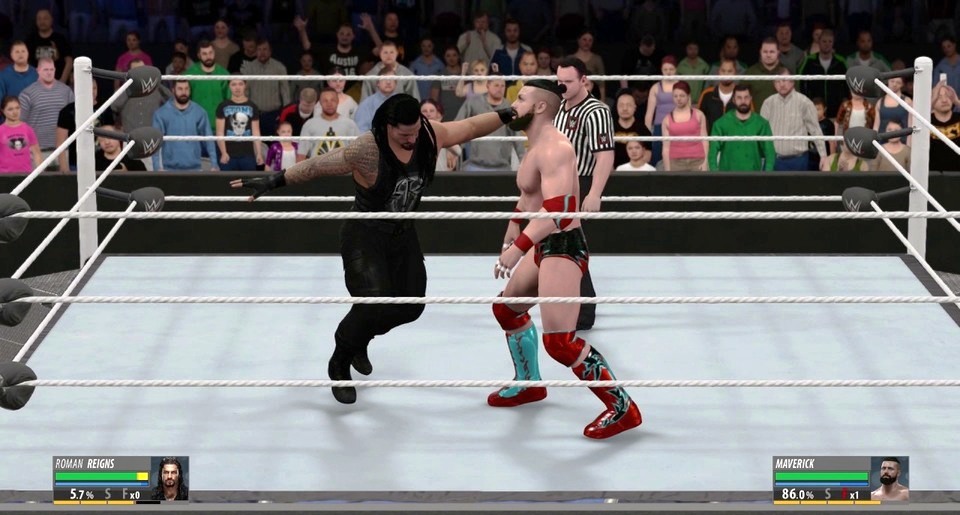 If you have played previous WWE games you will have no doubt encountered the cluster-fuck that was the multi-man matches. Every match either felt like a constant interruption while trying to do a move, or you were caught outside the ring, while someone else got your pin. Well we are in luck this time, if there is enough damage done to you or your opponent, you can roll out of the ring and recover some of your health. You have the option to recover early and get back in the ring or wait till the bar fills completely and come back at full strength. 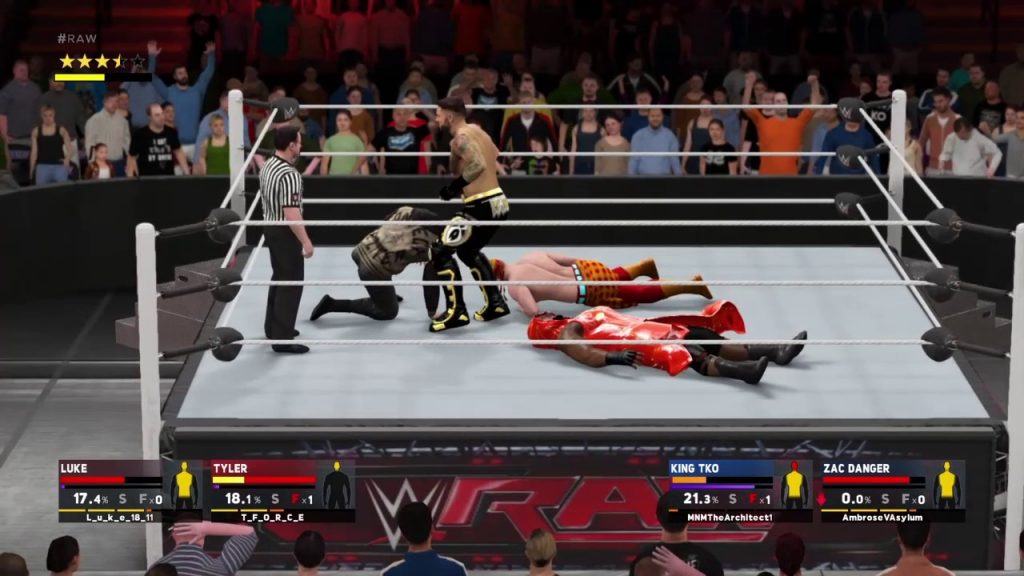 The targeting system is a lot more refined, with a simple click of the thumb-stick your superstar will target a different opponent and their name will appear above you.  The position changes for the tables and ladders have also been improved allowing a better set up for OMG moments and “spots”.

The Taunt system has also been given a more important role (which you should know), as your superstar preforms a successful taunt they will be granted a mid-match buff, this again makes the player see and feel the match playing out closer to how it is presented on TV.  Also, the ability to perform apron, turnbuckle and various other “area specific” taunts are welcome.

Making a return this year is the ability to take the fight into the backstage areas such as the Gorilla position, locker room, the bosses office (with boss) and a weapon laden hallway, nothing compared to the days of old but it fits in neatly with this installment and hey who wouldn’t enjoy power bombing their opponent right in front of Vinnie Mac. 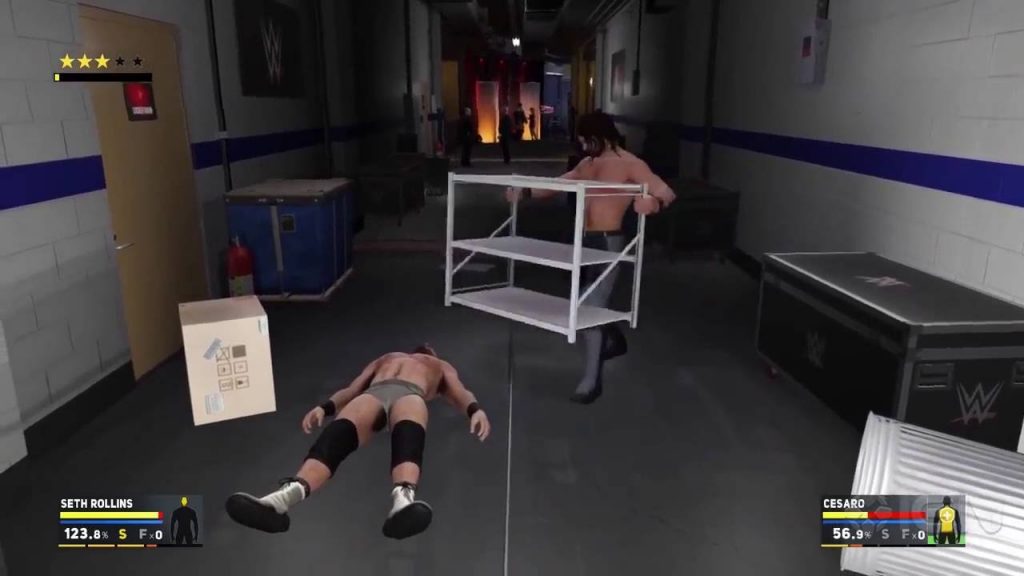 WWE 2K17 is certainly not without its issues, the pacing of the matches (as mentioned earlier) feel like they plod along depending on what reversal is performed, with no ebb and flow. The game play can feel a bit sluggish when playing as the heavy weight classes, and a tad jumpy as the lighter more aerobatic (cruiserweight) weight division. Also While the reversals are easier and more defined, they can feel very rigid, the one button approach will perhaps ruffle hardcore players who feel it has been made too easy or that it favors the less experienced player.

The “My Career” mode still feels very tedious and repetitive and doesn’t make the player feel like they are on their own personal WWE journey. A new feature which lets you cut promos is still very much in the development stages and without actual dialogue, it feels very wooden and hollow. 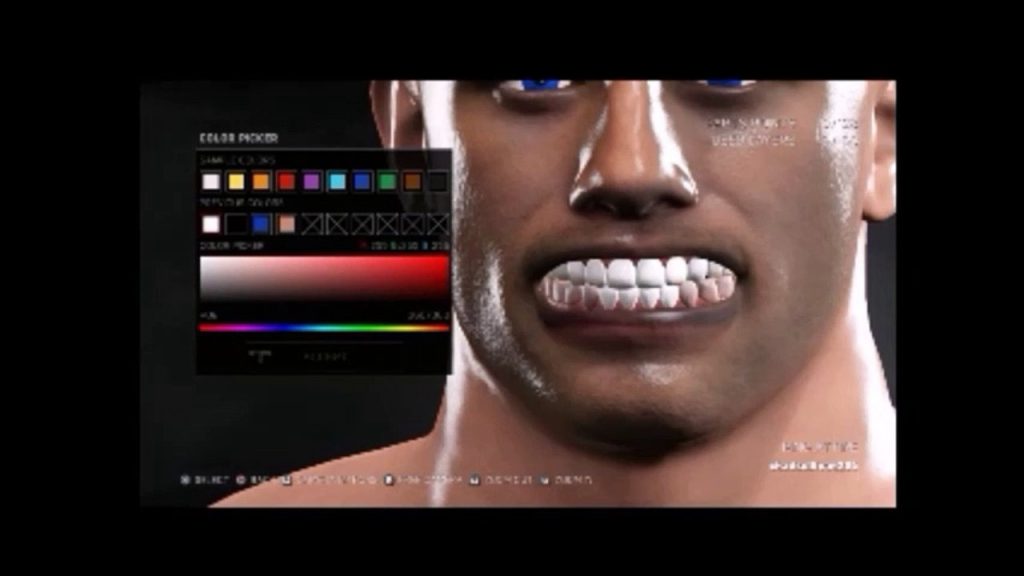 Another issue that stuck out was the terrible commentary, from mis-cued comments, to ones that have no place in the WrestleMania moment you’ve just created; it can sour the experience for new and old players alike.

The end result, while the games are getting better as each year passes, it’s not at the rate players want or need, for all the big improvements there are still a lot of nagging issues that hold the overall product back. Wwe 2K17 will not have new players climbing between the ropes in a hurry, and veterans will still be looking for their WrestleMania moment, but this Is by no means the bottom line for the Wwe 2k series.